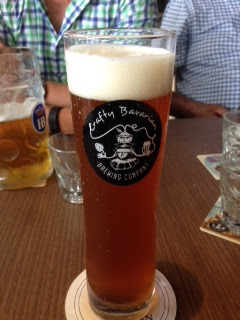 Contract brewed probably at Icon Brewery. On tap at the Bavarian Beer Cafe in Miranda, February 6, 2016.

Smells wheaty, with a restrained sour spice note. Clove and pepper dominate with a hint of lime on the back. Grapefruit too, maybe. Possibly over-hopped? Lacking classic wheat fruit flavours, but otherwise pretty decent smell.

Taste is quite sour, bitter. Malty upfront with big caramel and sickly vanilla note. Develops some banana midway with some more sweetness and some mild spice late on the palate. Clovey, cinnamon, finishes quite sweet and could use some more earthy notes to clean up. Not bad but slipping off the standard flavour path without much reason. Has hints but a few holes in there as well.

Bitty, very sedimenty with some rough edges. Smoothes out a bit at the very end.

Feels like the right beer but just has some missing or off notes. Maybe too much crystal malt? It has quite a dark, rounded barley edge that really doesn't belong there. Certainly decent, in the final analysis. I'm really not sure it needs this pretentious 'crafty' label though. There are things that aren't massive amounts of absolute wank, and this brand name isn't one of those.
appearance: 3.25 | aroma: 3.5 | taste: 3.25 | feel: 3.5 | drinkability: 3.5