Pours a dark brown colour, glint of light at the bottom but murky all the way through the body. Head is beige, foamy and nice with good retention. Lacing is sticky and enjoyable. Revives with a swill. Looks good.

Smell is very intense, with huge spicy espresso character that's almost too pungent. Upfront it assaults the olfactory then there's a softer, chocolatey roastiness lingering behind it that's quite pleasant. Touch of cherry, and some woody notes as well. Yeah, kind of fresh cut cedar character. Maybe slightly smoky but actually really woody now I pay attention to it. Really quite nice.

Taste is a little disappointing, because it doesn't have the potency of the nose. Starts with some cocoa rich chocolate, and then develops that spicy espresso note towards the mid and back, with a growing booziness that mingles well with the piquancy of the coffee character. Some light roasty notes that are kinda burnt and kinda meaty in equal measure, and that kind of linger with that charry bitterness. But it lacks that woodiness, the fruitiness; it feels like a very pared-back roasty stout without a lot more character to it.

Quite bitty and even fizzy on the feel; some decent malt base but feels quite busy in the mouth.

Every time I sip I still get that cedar character on the nose as it goes in, but then the palate really doesn't deliver much that's all that interesting. It's not bad but just not that special.
appearance: 4.0 | aroma: 4.0 | taste: 3.5 | feel: 3.5 | drinkability: 3.5
46th Anniversary Caffe Corretto Stout
9.0% American Imperial Stout from Bull & Bush Brewery
Overall:
77 / 100
(Excellent) 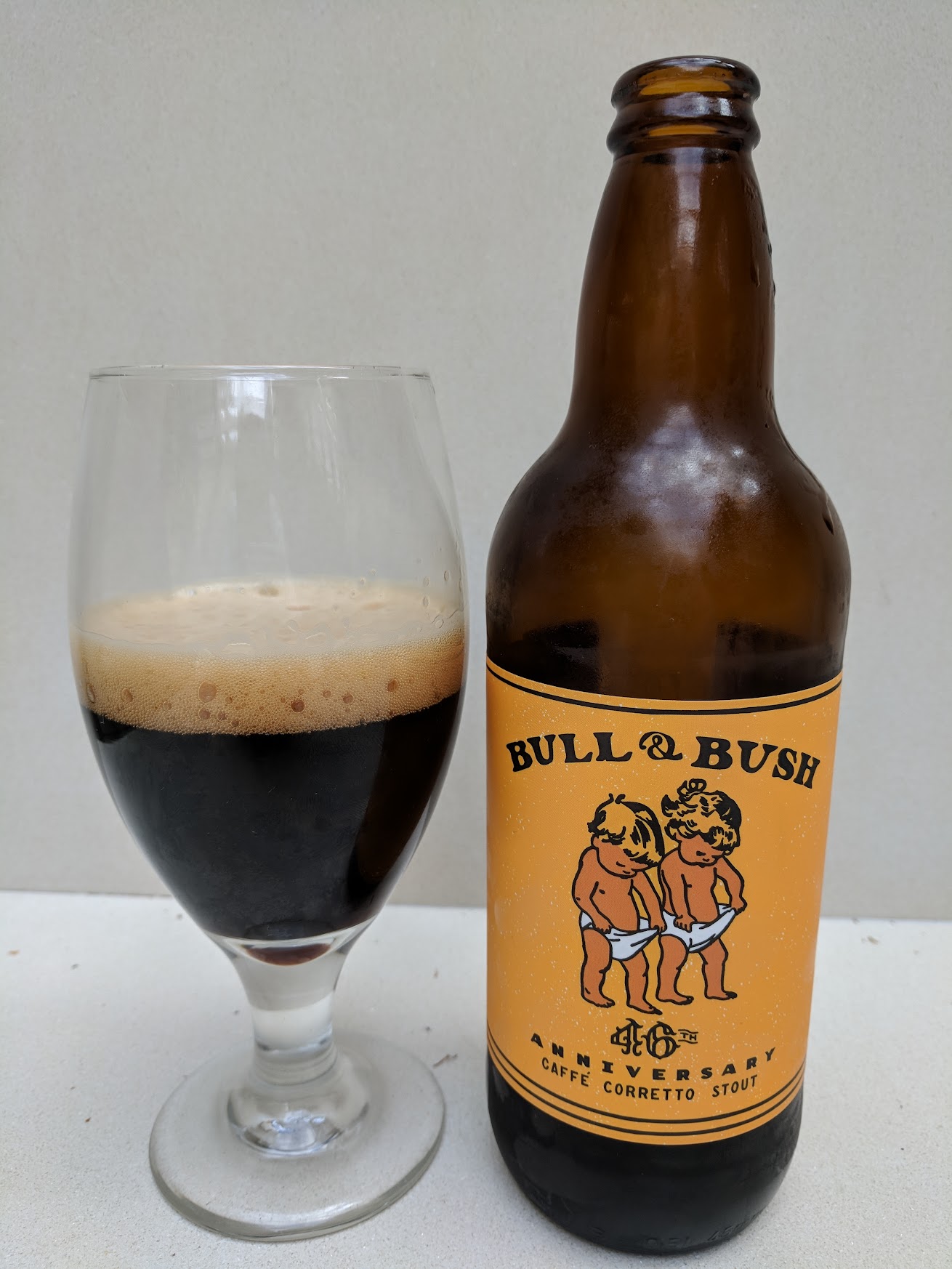 500ml brown bottle purchased from Davidson's Liquor in Denver. Shared with Sam back in Sydney.

Pours a pleasant deep brown, with a touch of ruby to it at the edges. Head is fine, slightly frothed coating of mocha that leaves persistent lace. Body has some weight, but the carbonation is swift. Looks pretty decent.

Nose is pummeled with coffee, much to the exclusion of anything else. It's sharp and vibrant, no question about it. It turns almost grassy and sharp—the coffee itself has overtone of lemon verbena and bubblegum. There's layers to it, and I really like that.

Taste is also extremely good. There's a slickness to the body, which really helps coat the palate and prepare the floor for everything else. Coffee obviously take pride of place once again, with a mellow, milk-cut version that managed not to steal all of the spotlight this time. Around the edges are notes of jersey caramel, a twist of aniseed and even hints of ripe banana. Yeah, I like it.

Feel is light, despite the slickness in the body. It has enough heft to support it without getting too rich or cloying.