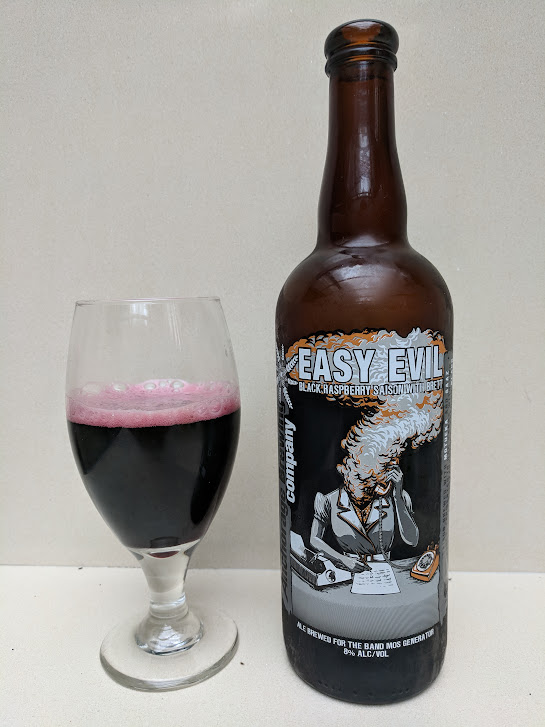 Pours a vivid dark purple colour. It looks somewhere between reduced Ribena and young shiraz. Yeah is a light, but still vivid purple that persists as a staining ring around the glass. Body is fairly light, although there's depth and opacity to the colour. Carbonation is fine and swift. I mean it sure has a Look, I'll give it that.

Nose is decent enough, but to some extent it's not really that exciting. There's pronounced raspberries on the front, maybe with a slight blackcurrant tartness in there as well. But it also has a bready note underneath—with the acidity it gives a slight suggestion of sourdough. It has a slight leafiness underneath all of this as well. It's okay, but not one of the most interesting aromas I've had from Anchorage.

Taste is maybe a bit better, with more of a direct, sharp acid to keep things on track. More of those slight sourdough characters around the back of the palate, and the fruit all but evanesces into aroma. It's surprisingly thin, without a huge amount of complexity, and almost no body to sustain it beyond the leap to that acid.

It's a decent beer, and a decent idea (and seriously, that's the only beer I've ever had that looks quite like that), but I think the execution is slightly lacking. It just ends up feeling dull, and a bretted black raspberry saison should be anything but that.
appearance: 4.0 | aroma: 3.75 | taste: 3.5 | feel: 3.25 | drinkability: 3.75
Easy Evil
8.0% Saison from Anchorage Brewing Company
Overall:
47 / 100
(Not Great)
Pours a dark purple, yeah, with pale purple/pink head of foam. Lacing and cascade are quite lovely, and look the colour's noticeable and interesting. I'm intrigued.

What the heck is that? Weird sweet but herbal and spicy nose, from the colour it makes me think of beetroot, it's mostly sweet but with a weird earthy note to it too. A little bit too sweet too, like there isn't enough edge or cut through, just that fruit juicy/vegetative aroma and little else. Medicinal.

Tastes yeah, it's weird. Not vegetative but lots of a very sweet blackcurranty character that then gets a weird mishmash of sourness, spice and a minty freshness. Plenty of medicinal and menthol character on the front that continues towards the back. The finish is kinda nonexistent too, like there's a faint fadeout of some tartness but then a mild earthy sweetness with little to continue or make it moreish. It's both weird and unimpressive, and I don't like it.

Mouthfeel is quite full, even a little heavy. Works well for the style though and carries it off. No issue with the texture.

Yeah it feels like a weird experiment with some ingredient, but the beer behind it hasn't got much oomph to it so it ends up quite empty and just directionless. The texture also indicates a quality brewer at work (I reviewed this blind so didn't know it was from one of my favourite breweries) who's made a good beer where the flavour just doesn't work. I'd allow Anchorage a hundred missteps just for making the Love Buzz saison, but the fact that this comes from the same place doesn't ameliorate it.
appearance: 4.0 | aroma: 3.0 | taste: 2.5 | feel: 4.0 | drinkability: 2.75