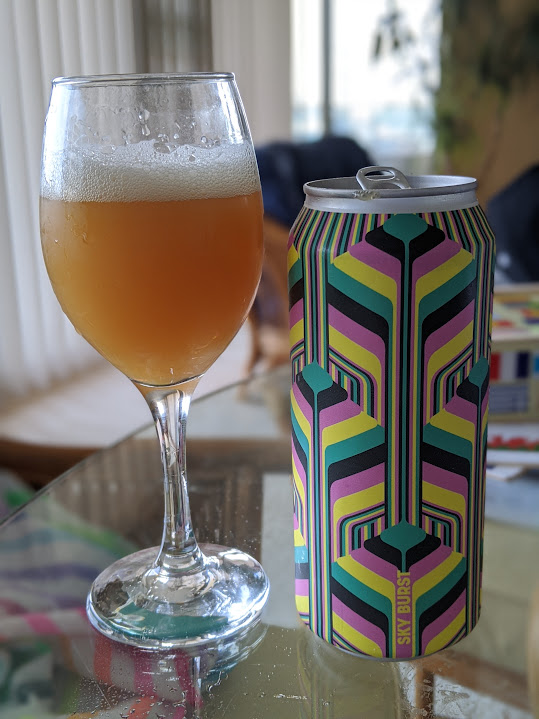 Pint can purchased from Jane's Beer Store in Mountain View, CA, about a month ago, but I didn't realise the can was almost 3 months old when it was on the shelf—a problem I often find with that store.

Looks the part when poured though, a very hazed, almost opaque juicy peach colour, with a foamy, ultimately quite loose head of white that settles out to a ring. Body has weight behind it. And carbonation is very fine.

Nose is not great—yes, this is an old can of NEIPA. It has that harsh, reedy, pellety hop fragrance that smells like an unwashed fermenter that you've forgotten about for a couple of weeks. Were it fresh, I could imagine it having more of the volatiles to help elevate it, but as it is, it's harsh.

Taste is also not great—it really, really speaks to the fact that NEIPAs, however good they are fresh, do not have longevity to them at all. Actually, there's something a little better about this, because if has a smooth mouthfeel and still maintains some of the fruity flavours you might have had if it were fresh. But the back peters out into a kind of wimpy sweetness, and there's nothing backing it up to give some kind of structure to it. Disappointing.

Overall—yeah, this is way too old, and yet it's like 3 months old and it annoys me that a beer this young just completely dies after a while. Even with a more traditional American IPA the bitterness would provide some balance, but when you're basing the entire beer on volatile hop compounds, it's going to die quickly. The lesson is—pretty much don't ever buy a NEIPA, unless it's weeks if not days from its packaging date.
appearance: 4.0 | aroma: 2.0 | taste: 3.0 | feel: 3.5 | drinkability: 3.25