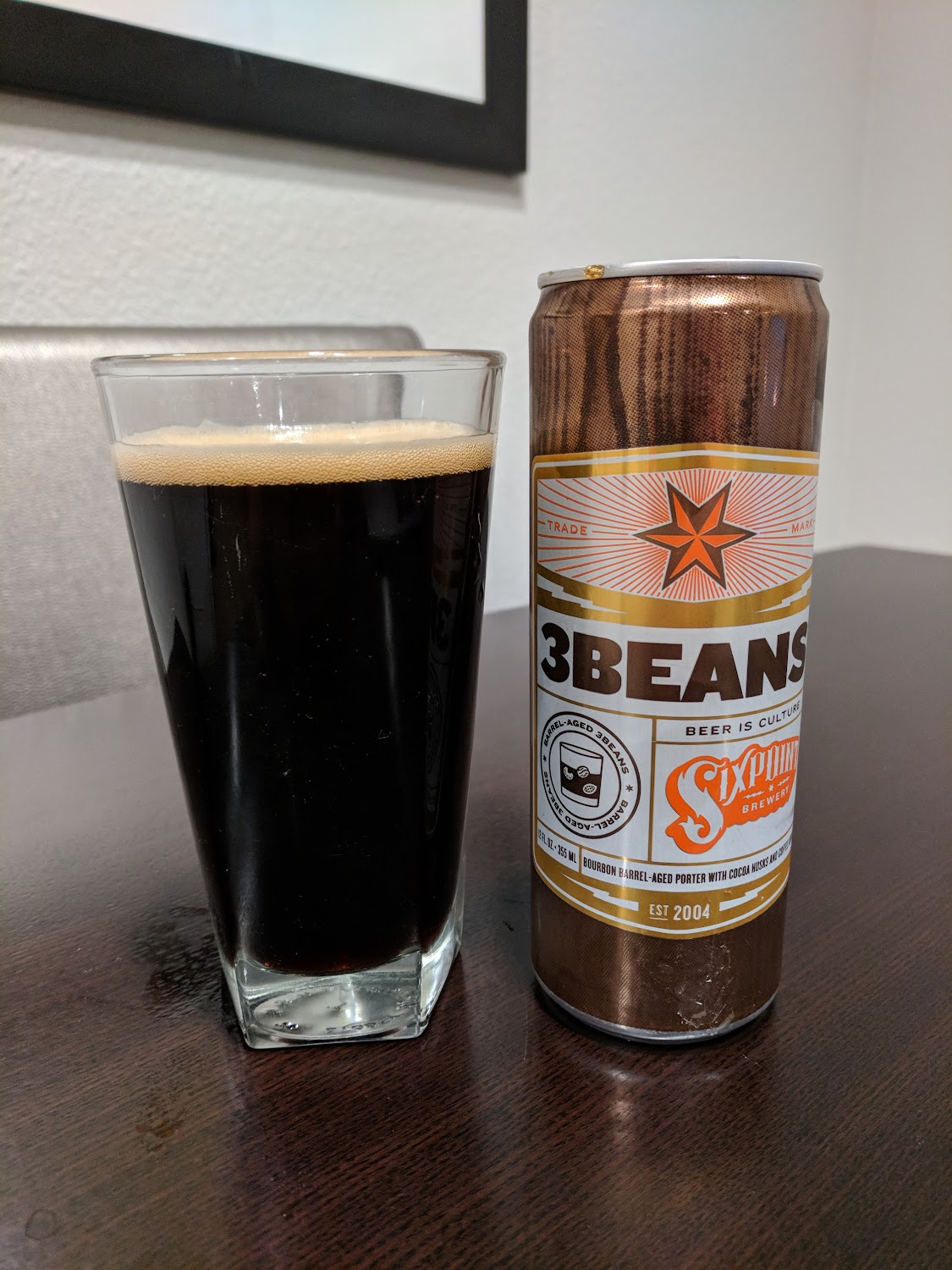 Pours a deep black, brown with a slick weight to the body, but more liquidity than you expect for a >10% ABV imperial porter. Carbonation is very fine, but very swift, again accentuating the lightness of the body. Lacing only forms in very thin, vertical lines. It's okay, but it's not inspiring.

Nose is quite pleasant. There's a smooth, overarching vanilla character which allows soft powdery cocoa and coffee notes to float over the top. Mostly it's based on that semi-floral sweetness of the vanilla though. It doesn't have a deep porter bass-note. I'm hoping there's some depth on the body.

Disappointingly, the body is quite light. There's not a depth of sweetness, although the malt is more prominent here, allowing a pressure of weight to push the other characters forward. Here, I get chocolate flavoured cereal, overly milky coffee, and a kind of woody, resiny character on the back, almost like chewing on cannabis.

Feel is very light. It doesn't at all support the flavours that this is desperately trying to promote.

I'm a little underwhelmed to be honest. There are so many better beer in this same basic mould. And the slickness of the presentation doesn't hide the fact that this is a middling beer for what it's trying to promote. There are way better similar beers out there.
appearance: 3.5 | aroma: 4.0 | taste: 3.5 | feel: 3.25 | drinkability: 3.5
Galacto Wild Saison
5.3% Saison from Sixpoint
Overall:
61 / 100
(Decent)
On tap at GABS 2016 in Melbourne.

Pours a gold colours, clear with a nice foamy head that sticks around. Could potentially use a bit more cloud for the style, but otherwise looks good.

Smells fairly hoppy, oddly enough. Grapefruit and lemon notes give off a big west coast American character, with a touch of crisp green apple in there as well. At the back it gives off a champagne aroma which is the first primarily saisony note I'm detecting. Still, fruity and pleasant.

Taste is quite sour and citric. Somewhat organic and funky upfront which ticks the saison boxes but little else. Develops a crisp, tart note on the late-mid; green apple and grapefruit astringency towards the back that then gets clipped off to leave the palate feeling a little bland, in the end. Not bad but had a far more exciting prospect on paper.

Decent body, maybe a little sharp form the wild yeast in the end.

Smell is a little off. Quite metallic but with a nice softer fruity hop note behind. Quite distinct pineapple, with a touch of guava and citrus as well. Fairly tangy but a bit subdued under the metallic influence.

Taste is very fruity indeed. Big tropical flavour announces itself in its supple, juice form early - pineapple, mango and guava on there, goes from sweet upfront to tangy, then fizzles out a bit early and quite dry, without a huge amount of finish. Slight fruit juice lingers actually, and makes me feel it could use some bitterness to carry the finish across the line.

Little bit thin, but nice texture as it goes through, slightly bitty and slightly fizzy. Good.

Smells very pleasant, but there's not a huge amount of anything in there. Slight caramel malt with hints of citric hop - lemon, mint and some Italian herbs. Nice balance but could just use a bit more aroma.

Lot more power to the palate. Quite citric overall tone, but it's all very bitter. Some grainy notes on the assault but then tangy lemon and grapefruit take over mid-palate with a hint of soapiness. Bitterness on the back is slightly medicinal with a quinine edge, and it just sort of lands flat after the mid-palate which had potential for a more rounded, complex finish.

Nice texture to it and decent body, it really keeps the senses interested as it goes through.

Bit disappointed with this beer overall. It's not a bad drop at all, I just feel there's unfulfilled potential in it.
appearance: 4.0 | aroma: 3.5 | taste: 3.5 | feel: 4.5 | drinkability: 3.5
Bengali Tiger
6.4% American IPA from Sixpoint
Overall:
68 / 100
(Solid)
Pours a burnished orange hue from the can, with a lovely haze that seems to brighten the colour. Head is disappointingly filmy, but forms in a fine white ring around the top, leaving some speckled lace as the beer goes down. Nice weight to the body, hopefully it gives a good basis for the hops. Looks nice.

Nose is mild, but pleasantly fruity. Slight green tropical fruit characters, giving hints of melon and carambola. Less bright, citrussy and robust as other examples, but it has a pleasant crispness to the fruit fragrance. Also good.

Taste is rather light, but actually well balanced. Although there's not a lot of noticeable sweetness, there's a heft to the palate which supports the green, slightly cutting hop character that comes through the centre of the palate. A touch of carbonic acidity or slight astringency on the back is the only off note for me, although it's rather mild all over.

Yeah, it's a nice enough brew. I like the balance, and the slightly underripe hop character gives it a cleanness, although it feels like the highs and lows of a great IPA have been dampened a little for this one.

Pours a burnished amber colour, quite orangey. Head is jaundiced beige, no real retention, just a cloud on the top with some trails of lace that do stick around. Yeah, not bad at all, except for the head retention.

Smell is fairly fruity, kind of fresh with a distinct lemon citrus aroma and a metallic tinge as well. A bit empty, lacking malt mainly and it's most just light tart/hop notes.

Taste is better but still lacks body and substance on the palate. Grainy upfront with mild bready notes, touch of barley, rye and caramel that develops into lemony tart notes. Mildly 'off' with organic notes that are quite bitter but not completely full, and borders on metallic at the back. Slight chemical edge to all of it, and ultimately just lacking a bit.

Thin, watery feel, but smooth, without dryness. Could use more body.

Yeah, not huge on this, but some borderline enjoyable flavours.

Pours a pretty thick reddish amber colour, with a fine cream of off-white interspersed with large clusters of bigger bubbles. Fine lace graces the sides of the glass. Carbonation is refined and streaming. Looks pretty good.

Nose is wonderful. Plenty of slightly spicy rye sourdough character, with lashings of bright American hops to give it a cleansing green bite. Fresh, but complex and just a little different. Lovely.

Taste is a lot more subdued, but here the light and thin rye character gets more of the spotlight, with a subtle raw organic character and a touch of sourness. This is balanced on a solid bready malt base and cleaned up with a dash of hop bitterness on the finish. Feel is a bit too light, I feel)it has all these lovely heavy malt and hop characters, but not a lot of foundation on which to base them.

A very drinkable and flavoursome brew, nonetheless. I really enjoy the prominent rye characters, which make it different enough to be recognisable, while the rest of the recipe is tempered to make it approachable and drinkable.

On cask at Barcade in Williamsburg, New York.

Pours with a frothy, disintegrating cask head; a lively red-black colour. Head is still surprisingly solid, considering the beer is under-carbonated or completely uncarbonated in the cask. Colour is deep, but is still quite clear. Looks pretty good.

Nose is shockingly, very bready, with big residual yeast characters and a wet rye character. Very mild otherwise, but clear and clean. Not bad, but missing something.

Taste is smooth and savoury. Not a lot of either chocolate or rye, although the deep bread character makes another appearance. Light peppery characters come through, with a touch of cleansing chlorine. A touch of tobacco and gritty bitterness on the finish. Very smooth feel and a lively cask character, but missing flavour. Flavour!

Had better, especially from this brewery. But this was very pleasant and exciting to get to try.

Called their "doppelsticke". Had on tap at The Pony Bar in New York.

Pours a burnt amber colour with a fine white head. Concentric lacing around the glass with a fine bead of carbonation that slowly flows to the top. Nice body, pretty nice look all up.

Nose is mild and slightly woody, with some rustic, earthy tones and hints of oak, or even more surprisingly, cedar. Mild and a little bit whiffy, but interesting enough.

Taste is also quite mild, but the wood character here is a little too dominant, and lasts for too long. Slight vanilla sweetness and a touch of spice, but there's not enough of anything to balance the prominent and rather biting wood characters. A touch too astringent on the finish.

Eh, I've had better from Sixpoint. Yes, this might be mad, but it just comes across as not that well thought out.

Pint can purchased from Whole Foods in Tribeca, NY. A reputedly crisp pilsener seemed like a suitable beer for a 93 degree day in NYC.

Pours a clear and bright, light golden colour, with a fizzly head of white, large bubbles. Minimal lacing, and minimal head retention, which is a little disappointing. Rather heavy looking body, again surprising, although not unpleasant. Shame about the head.

Nose is bright and clean, with some crisp hop characters giving a pleasant blend of leafy european greenness, with a touch of citric American varieties. A hint of earthed pilsener grain as well, means this is a pretty crisp Pils, and pretty spot-on stylistically.

Taste is clean and bitter, but with a lingering honey sweetness that doesn't do it any favours. Grain comes through as well, with an earthy bite that lingers too long on the palate, interfering with the cleansing hop finish. Hops are dominant, however, with a clean sharp vector through to the finish, and a bold spike of bitterness. Feel is clear and, indeed, crisp.

Not bad, but not great. A decent pils that doesn't really hit the high notes, but puts together a solid package nonetheless. Still below my favourites of the style.