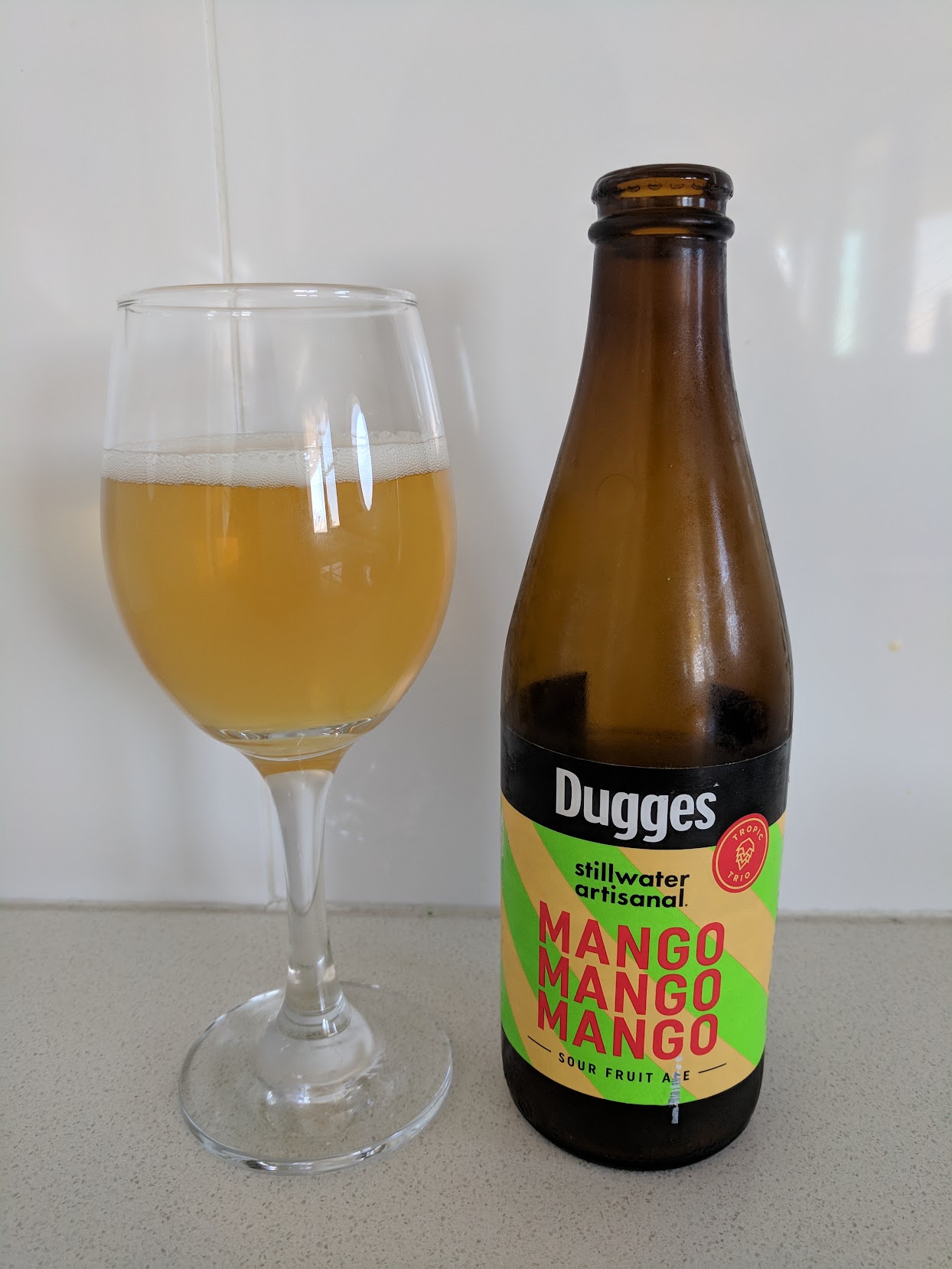 Strange, squat 330ml brown bottle purchased for me by Sam for Christmas.

Pours a very pale straw golden colour, with a evanescent head of white that merely becomes a kind of bubbly ring. Carbonation is persistent though, forming in large, languid bubbled that work slowly towards the surface. Looks decent enough.

Nose is very pleasant indeed, with a pronounced, almost fake punch of mango aromatics. They're fresh and bright, but more strongly tied to a slight vinous acidity, which gives a lovely character of sauvignon blanc. It's actually a really nice combination. And while that's kind of it, I love the combination.

Taste is also extremely good. It's not excessively tart, but it brings that sauvignon blanc acidity to the fore again, this time deepening it with characters of grass and green capsicum. The mango is still present too—it doesn't have the same sweetness to really complete the illusion, but the fragrance reverberates around the back palate, adding an unusual depth to the palate. Yeah, I like it.

Feel is very light, and perhaps slightly too frothy with carbonation. It doesn't properly connect it to the acidity, which would be a nice way for it to go. 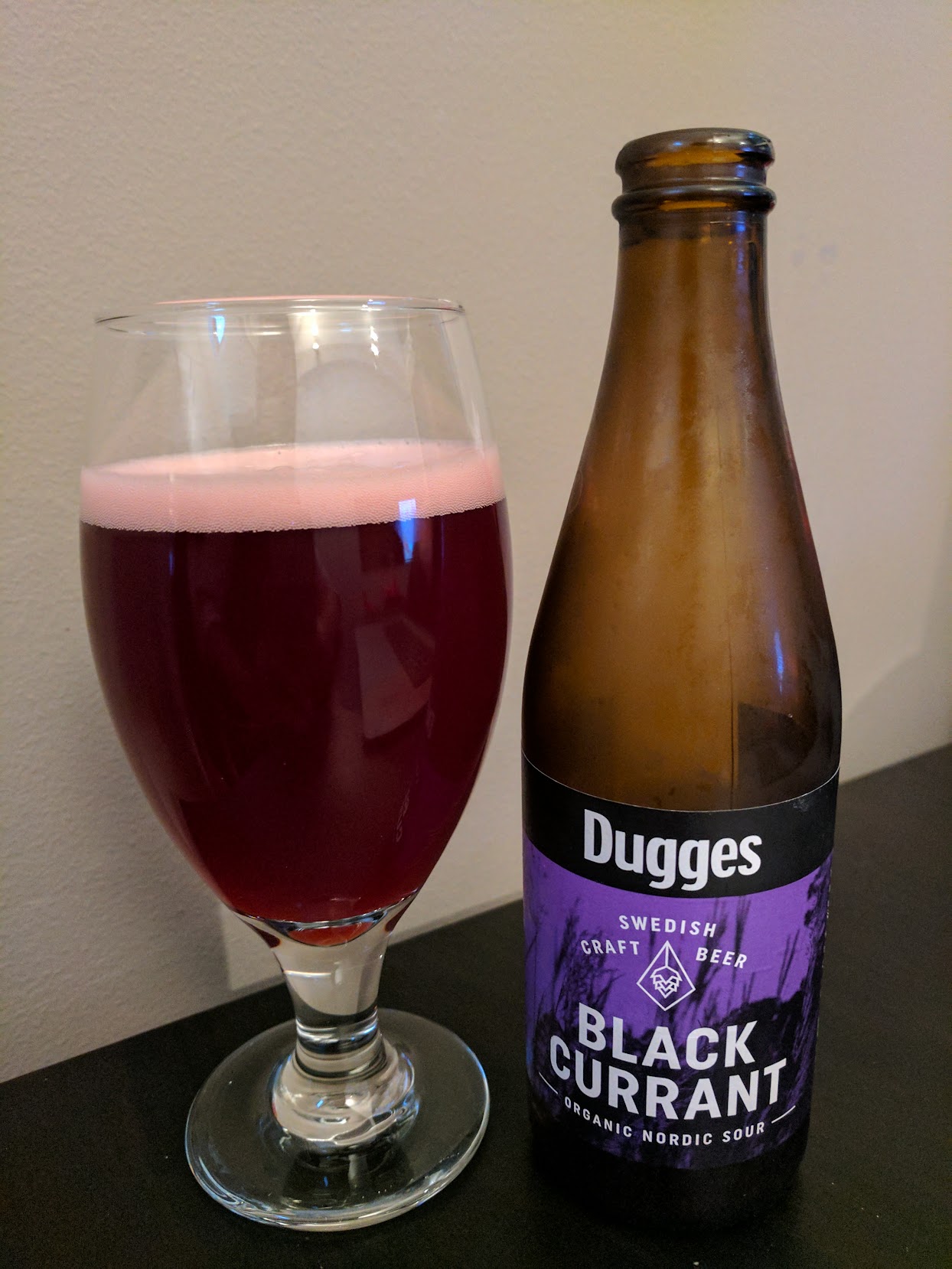 330ml squat brown bottle given to me by Sam some time ago. It's been sitting in my fridge looking unloved for many months. Best before date in January 2018.

Pours a lovely Ribena purple colour, with a mauve heave of fine bubbles that settles out into a fine film. Carbonation is sparse but also fine. Body has a bit of weight behind it, which is not bad for 4.5% ABV. Looks pretty good.

Nose is slightly underwhelming. There's a slight lactic bite, with a suggestion of tannic wine. There's also some slight floury, yeasty notes which don't do it much good. It's relatively inoffensive, but it's not as aromatic or complex as the best sours.

Taste is a whole heap better. There's a really sharp, pungent tartness to it, which feels biting and crisp. It's actually really well created. It lingers towards the back, with a pleasant aftertaste from the blackcurrants—somewhat vinous, but with an underlying sweetness. Finish has red grapeskin and a slight bite of aspirin and carbonated water. It's really very good.

This definitely redeems itself by the end. There's a huge amount to recommend this, even though the nose is underwhelming. It has a really well-created sour character, and everything else rides on that.
appearance: 4.0 | aroma: 3.25 | taste: 4.25 | feel: 4.25 | drinkability: 4.0
Idjit!
9.5% Russian Imperial Stout from Dugges Ale- & Porterbryggeri AB
Overall:
76 / 100
(Excellent)
Pours a dark brown colour up to the light. Head is beige, very decent. Nice lacing. Clings. Looks a little pale for the style, but otherwise very nice.

Chocolate up the wazoo on the nose. Slight roast, but lots of sweet. Pleasant roasty with an English cleansing edge to it. Smells dark and potentially bitter, but a double layer of cocoa rich chocolate. Just lovely.

Taste is chocolatey, fairly rich. Slight dry cocoa and roast. Touch of smoke on the back. Pleasant flavours. A bit dry maybe, could have used more of that sweetness to the end, but very nice for the style.

Dry on the back, decent body. Not bad.

Pours a pleasantly clear orange hue, with a pretty solid yellow-white head of frothy foam. Some patchy suds of lacing stick around. Body is fluid but with some weight behind it that allows very fine carbonation to form. It looks good.

Nose is mild and slightly herbal. Some peppery spice, perhaps a slightly English overtone to it. Slight sawdust character, and a bit of dust. Slightly sweet malt comes through, with a little phenolic banana aroma. Overall, it's ok, but nothing really special.

Taste is similar. Smooth, slightly nutty malt with a dusty, earthy hop character, and a bit of herbal, leafy bite. Some pith comes through, but there's really not much true citrus character. Mild, tannic bitterness sits on the finish. Feel is pretty flat and a bit thin.

Overall, it's another disappointing IPA from Dugges, following on from the Holy Cow! There's something about it that seems a bit pedestrian about it anyway, and the fact that it seems old doesn't do it any favours.

330ml bottle purchased from Slowbeer in Melbourne. The only other Dugges beers I'd seen before were when I was in America, so I was pleased to see some hitting our shores. They also did (in collaboration with NÃ¸gne Ã) my favourite Sahti, so I'm happy to be able to try some more of theirs.

Pours a rather dark golden colour, almost tending towards amber, with some haze. Head is a mushy bubbly mess of off-white, that settles to a pancake-bubble flatness on the top of the glass. Lacing is solid and persistent. The body looks reasonably heavy, although the carbonation is large bubbled and haphazard.

Nose is oddly hoppy, and not necessarily in a good way. Although there are some of the classic pine or resin characters, they have a nuance that gives them aromas of hospital antiseptic, dish detergent and wood shavings. Malt tends to be a little grainy. There's an almost plasticky aroma to the hops after a while, and it's not really that pleasant.

Taste is similar, or perhaps even worse. Slightly metallic hop flavours sit flat and lifeless throughout the palate, while there's a mild modulation in the grainy sweetness backing it up. Sandy, gritty character on the back lets the malt melt into a mush of musty sweetness. On the finish, there's a wet cardboard oxidation character.

I note that there was no freshness date on the bottle (not that I necessarily expect one), but this certainly feels old. In fact, it feels like it's years old rather than just out-of-date. I really don't see how it could be years old, so that may just be a reflection on the beer at its core. As it was, this wasn't a terribly pleasant experience.

Purchased from an unassuming little shop in Oakland, CA, and brought back to Australia. Shared with @tobeerornottobe.

Uncaps with barely a hiss, and pours very slowly, with almost no carbonation or head. In reality, there's some static carbonation when it's tilted, but otherwise, the head that forms is a honeycomb of huge bubbles that look like they've arisen purely from the disturbance of being poured. Colour is a deep brown, translucent at the edges, but opaque in the centre. Can't say I'm overly impressed overall, but it's not bad.

Nose is very pleasant with a great sweet roasty grain character that really gives it that sweet American edge. A hint of smoke comes through, but it mingles with the roasty, grainy sweetness nicely, giving a pleasant dark and devious aroma.

Taste is very similar, although the feel is very light, and it feels as though it's missing some body. But the roasted grain gives some pleasant coffee and toasted bread characters; an almost savoury note to what you feel should be a malty sweetness. It's very pleasant.

Overall, it's a very decent beer, and one I'd certainly be happy to drink again, or even on a regular basis. Although there are some aspects that just offend me slightly (the body, the head and the lack of smoothness on the palate), overall it's a pretty good package.