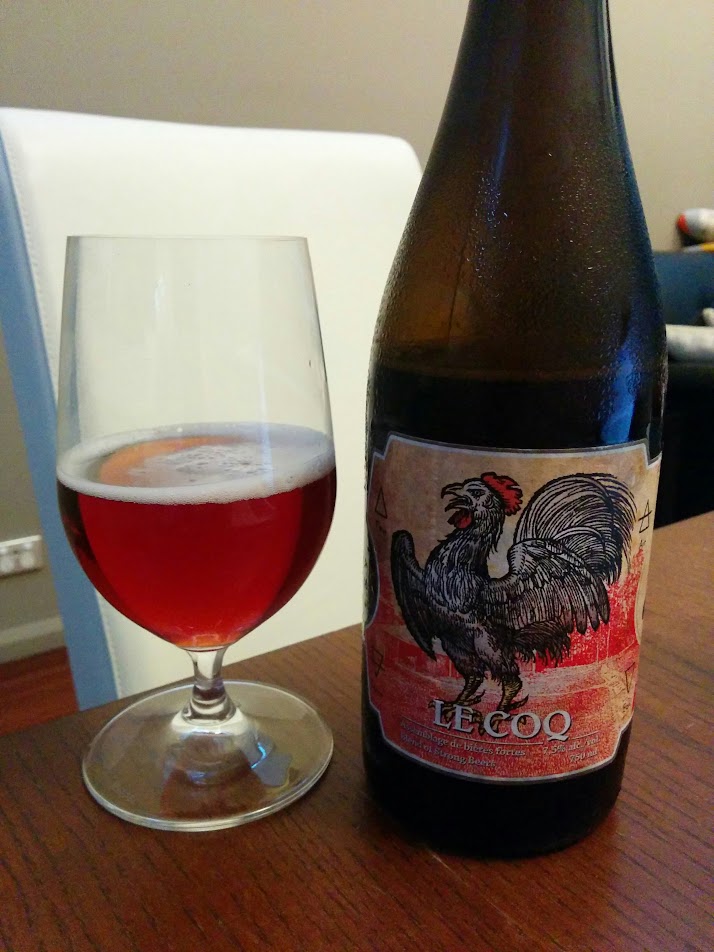 Pours a reddish-hued amber, with an initially coarse head, that bears a slight resemblance to soda-pop. This settle out to a faintly pink-tinged ring that looks quite silky and fine. Carbonation is minimal when it's just sitting in the glass, but forms in powdery whirls when the glass is tilted. Looks good.

Nose is immediately hit with tart cherries. Big fruit note, but tempered with some smooth barrel characters, that give it a little vanilla and sweet dried fruits. I get maybe some sultana, coconut and dried apricot. There's also a suggestion of something minerally to the acidity, almost a faint whiff of pool chlorine or ozone. All up, there's lots to explore, and the bulk of it is beautifully smooth and well-integrated.

Taste is also very good. The cherries do provide a lot of the surface flavour, giving some tartness and mild tannic notes, but the structure of the beer is in its blending and the barrel characters. Here there's smooth vanilla mingled with other dark sweetnesses—a suggestion of crumbled chocolate cookies, red velvet cake and more coconut. These form a basis on which is layered the tartness. This rears up again towards the back, but never overwhelms the palate—instead, we're left with a smoothness, some lingering tannins and more of that mineral note. Here it turns towards burnt sparklers and asphalt.

Feel is great. There's some weight to it to make things mostly smooth, but it's counterbalanced by a very fine effervescence, and the sharpness of the acidity.

Lovely, supple beer this one, blended beautifully while being very firm in what it's trying to present outwardly. There's something so well constructed to it that all the complexities seem perfectly designed to fit together to form the whole. Really great beer.
appearance: 4.0 | aroma: 4.25 | taste: 4.25 | feel: 4.5 | drinkability: 4.5
La Shawinigan Handshake
6.5% Weizenbock from Le Trou Du Diable
Overall:
77 / 100
(Excellent)
On tap at Vices & Versa.

Smells sweet and pleasant. Banana mostly, but a touch of poached pear and cinnamon, clove and nutmeg. Sweet. Yummy.

Taste is more tangy, some banana with poached pear, lots of clove getting towards back, peppercorns, fennel as well and coriander. Finishes with a light fruity ester which is unexpected and absolutely spot on for cleansing after the spice. Would like more fruit dominance upfront, but otherwise a great strong wheat beer.

Foamy in the mouth, not much booze but some. Dry on the back.

Good aroma. Lots of tangy, fruity, sherbet notes to those hops. Citrus and pineapple with rosewater, lychee, and nectar, pretty sweet overall with big vanilla and a hint of cherry as well. Maybe too sweet, but overall good.

Taste is also quite tangy but also very sweet. Lots of malt, with vanilla notes, hints of rosewater and pineapple sherbet. Doesn't quite have enough bitterness to clean up, although the bitter flavour is prominent at the back, woody and phenolic in essence. Definitely lacking balance, with the sweetness dominating until the very last gasp, and complexity is all over the place. I like my IPA profiles to go Sweet > Hoppy > Bitter and this just muddles around the three throughout the palate. If I were to choose one flavour I'd like to dominate it would be hops. In this case it's sweet, so am not hugely impressed.

Feel is decent, not a lot of body to it but it's OK.

Not too bad overall, a little sweet for my taste but it's drinkable.
appearance: 4.0 | aroma: 3.5 | taste: 3.0 | feel: 3.5 | drinkability: 3.5
L'Imperatrice
8.5% Russian Imperial Stout from Le Trou Du Diable
Overall:
53 / 100
(OK)
Pours a very dark brown, almost black with ruby around the edges. Head is gorgeous, generous, dense and creamy. Dissipates after a while, leaving some stunning thick lace around the glass. Could maybe be a smidge darker, but otherwise fab!ulous.

Nose is sweet and dark. A lot of roasted espresso and cocoa character on that, interlaced with caramel, vanilla and butterscotch. Yeah, really quite sweet.A pleasant nose, but I prefer my RISs roastier, definitely.

Taste is also really sweet. A huge amount of vanilla and crème Anglaise blend with mild espresso notes to give this a sugary latte kind of flavour. Has a light chocolatey character on the mid-palate that still manages to seem a touch watered-down, and the finish is underwhelming and also oddly sweet. Don't really want that flavour in an RIS, especially on the finish. Pretty unimpressed overall, almost to the point of disliking it. But I have to be fair, I have tried some astoundingly good RISs, and this is not outwardly bad.

A bit thin on the feel, and yet syrupy. Almost like cough medicine, really. Not particularly liking it, a bit more texture to it might lower the sugary perception of the palate.

Smell is quite Belgian as well. A lot of nice clove and peppery spice blending with lovely fruity malt giving off orange and apricot notes. Great blend, could just use a bit more spice, but pleasant, definitely, and now, I've used, too many commas,

Massive malt hit on the front of the palate, like a big huge caramel wave on the tip of the tongue. Fruit comes through after this, tangy orange, apricot and cumquat with a huge dessert wine stickiness to it. Reminds one of a late harvest Botrytis Semillon, with a strong boozey warmth at the back to heat the throat and hints of white peppery spice. A pleasant, sweet, warming brew.

Thick and syrupy on the feel. Nice, but just has a little too much of a treacly texture to it.

A bit strong overall, but something that tastes this good is always a great one for sipping.
appearance: 4.0 | aroma: 4.0 | taste: 4.0 | feel: 3.5 | drinkability: 3.5
Le Baron Noir
7.0% Baltic Porter from Le Trou Du Diable
Overall:
60 / 100
(Decent)
Looks like cola when poured. Seriously, it's dark, red-tinged brown with lots of big bubbles around the side. Leaves a nice ring of cream-coloured lace which is where the resemblance falls down. Not a huge head, otherwise looks pretty...hmmm...mediocre.

Nose is pleasant and chocolatey. A lot of smooth, dark chocolate on there, slight cola (again!) character, lots of dark toffee as well, burnt sugar really. Yeah, sweet, dark, maybe some milky coffee on there as well, pretty pleasant.

Taste is a bit thin, some pleasant roastiness on there. Cocoa with hazelnuts, mild coffee bean character and a slight hint of English toffee. Starts sweet, gets nutty and a bit roasty at the end but never reached a 'lot' of flavour. Thin on the mouthfeel and palate. It's decent but I wouldn't really rate this against some other Baltic porters I've had, it just seems a bit insipid for something I expect to be richer, heartier. This is a good porter, but I expect more flavour and texture when you ramp up the ABV to 7%.

Smells malty, with a lot of tang from the hops. Strong tartaric sherbet character with citric notes and a lot of dark caramel on there, like actually Jersey caramel with a slight vanilla cream as well. Slight diacetyl is noticeable but is not overdone, just adds to the pleasant sweetness.

Taste is very malty on the front, very hoppy on the back. A lot of peaks and troughs to this, with sweet, caramel, toffee, cake dough on the front that almost 'switches' midway to hoppy - citric, floral and tangy with lemon sherbet and rosewater coming through. Never gets bitter though, the sweetness prevails throughout, giving lots of malt and toffee. Slight scotch-like warmth at the back, quite a pleasant heavier beer.

Feel is a bit thin for the obvious strength, doesn't quite scream of the maltiness I expect.

Nose is roasty, with dark grains present, but it has some noticeable vinous wine characters, and a weak sugary sweetness. Eh.

Taste is similar. Sugar sweetness comes through after the initial dark roastiness, but the roasted character is not nearly robustly enough. Boozy notes with a light kirsch character. Mouthfeel is smooth enough, but not much to work with.

Ozone on the nose; light geranium character with lilting tells of the more classic spice aromas. It's very robust and intense on the nose, even lending a fresh piney note. Wow. Really good, really fragrant and complex.

Taste is battered with a huge clove character, that almost overwhelms everything else. Very spicy throughout. Some light phenols are present on the back, giving a lightly bitter acetone finish to match the welling alcohol heat. Once I start filtering the clove, it gets a little more palatable, leaving some round Belgian yeast characters and a drier finish.

A big and battering beer to pound on the senses. Full of character, no doubt, but also a little too close to anarchy for more than a small glass.


On tap at the Local Taphouse's Canadian Spectapular in Sydney.

Deep, dark red colour, almost black except for the clarity in the body which allows the passage of some light. Head is a pleasant film of dusty light brown. Decent lacing. Nice.

Very boozy on the nose - pleasant with dark rum and bourbon noticeable, all balanced with a base of dark roasted grain. Very delicious indeed; so dark and nice.

Taste is also good, with a big welling of booze and darkness, matched very pleasantly with some rugged grain notes. Even a hint of kirsch or cherry seed coming through along with the liquor characters. It's all very nicely matched together. Very tasty. Mouthfeel is a little thinner than I'd expect, but not bad.

Yep, this is a very nice brew all up. Tingling with flavour and very rich. I'm quite the fan.

Not a lot on the nose. A bit of sweetness with caramel dominant, with the hops perhaps lending nothing more than a faint freshness. It's mild all up on the nose.

Palate is very smooth with an excellent mouthfeel: clear but slick. Taste is predominated by a light sweetness with a touch of grain, and a faint bitter finish. Smooth rather sums it up, however - I was expecting something more extreme.

Not bad all up, but much lighter in flavour than I had anticipated. I feel it falls short of being both a really good hoppy ale, or a really good wee heavy.

C'est la vie, as the Québecois would say...

Nice orange/amber colour, with a filmy but solid enough white head that leaves some English ale style lacing. Lots of carbonation. Not bad.

Lots of butterscotch on the nose, with a weird cinnamon character coming through - some washed out hop notes that give a vaguely English twist to the aroma. Quite English in style overall. Eh.

Taste is also quite English - with notable sweet malts only partially alleviated by the straight vector of cleansing hops. Finish is clean at least, but it's certainly missing some intensity. Mouthfeel clear and smooth.

Eh, it's drinkable enough. I certainly feel it leans towards the English style than the American style -- and it's just not that interesting.