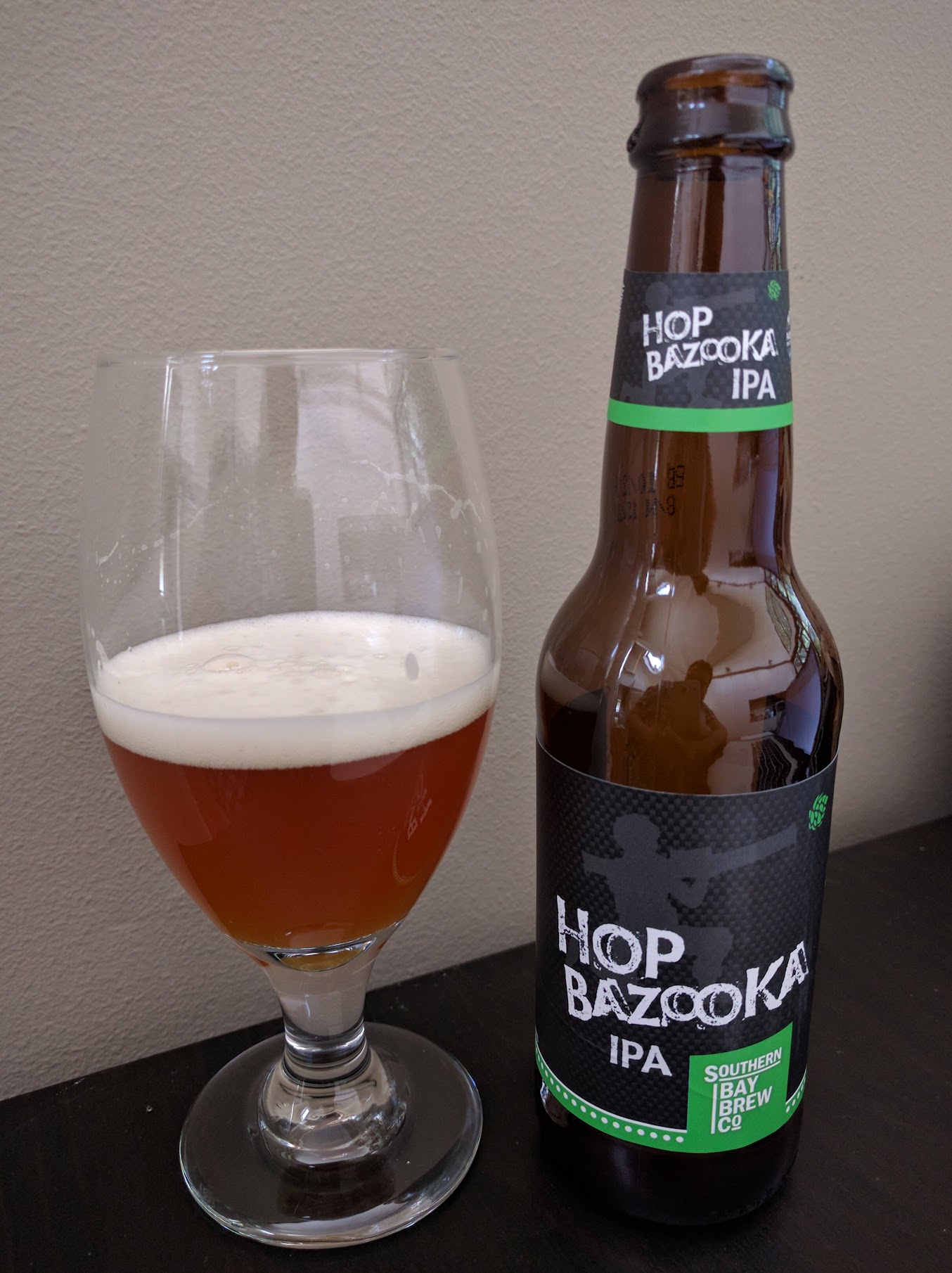 Pours a very cloudy orange-gold colour, with a frothy head of off-white, that leaves some nice rings of lace. Carbonation is fine, and it moved rather slowly through what's a fairly thick body. Looks pretty decent: the cloudiness is maybe a bit of a concern.

Nose is pretty good, there's a green, generic hop character to it, that smells a bit like fruity hops that have gone a bit old. But there's residual sweetness from them, and enough biting balance. It's pretty decent.

Taste is also pretty good. It's smooth through the middle, with malts providing a firm, fluid basis of sweetness. There's hops here too, but again they feel slightly tired and old—to some extent it doesn't matter though, because it just provides the bitterness that it needs to make balance. I can imagine that it's much better when it's fresh.

Beer number 13 in my 2016 advent calendar purchased from the Beer Crate.

Pours a burnished orange-amber colour, somewhat murky. Head is tightly packed but otherwise disappointing, just a rim around the edge. Lacing is pretty nice, which gives the only real sign that there’s much interesting here, as otherwise it’s fairly lacklustre.

Smells a tad oxidised, or rather really rather oxidised. Big dried fruit character with apricot, peach and a slight earthy pepper note, maybe some undergrowth as well. Not really desirable characters though in what I suspect this is, stylistically. Smells a little stale and a little whiffy, sulphurous maybe like it’s giving off by-product aromas that aren’t meant to be there. Probably a nice smelling beer but it just smells old.

Taste is yeah, weird and off. Big fruity flavour upfront, but not really sharp or fresh, just flabby and juicy with an overripe peach character. Develops a weird sulphurous note late, almost corporeal as it gets dry, earthy and peppery on the back. But it’s bland, dank and heavily oxidised and it’s probably not really worth continuing to review this as it’s clearly not meant to taste like this, it’s just a big hoppy beer whose characters have dried up and withered away.

Mouthfeel is smooth, but then gets very dry and strips back the texture on the back. Not too bad, this is unaffected by age I think.

Smells nutty upfront, and fairly Belgian. Chestnut notes, slightly sweet that leads into medicinal notes and a touch of spice. Not much to it and certainly don't get much rose.

Taste is also fairly Belgian and medicinal. Vanilla sweetness upfront that transitions nicely into phenolic medicinal notes. Rosewater comes through nicely on the back; having homebrewed successfully with rosewater I know how powerful a flavour it is, not to be used liberally. And this is fairly nice, just sweetens up the back and works well with the phenolic characters though it makes it quite heavy-going. This will be an acquired taste but it works fine for me.

Full body, fair presence of alcohol but warming and pleasant.

The floral character is well-used, but it does need something to cut through more on the finish, as the phenolic-rosewater character is quite heavy.
appearance: 3.0 | aroma: 3.0 | taste: 3.5 | feel: 3.75 | drinkability: 3.5
Vanilla Oatmeal Stout
6.5% Oatmeal Stout from Southern Bay Brewing Company
Overall:
63 / 100
(Solid) 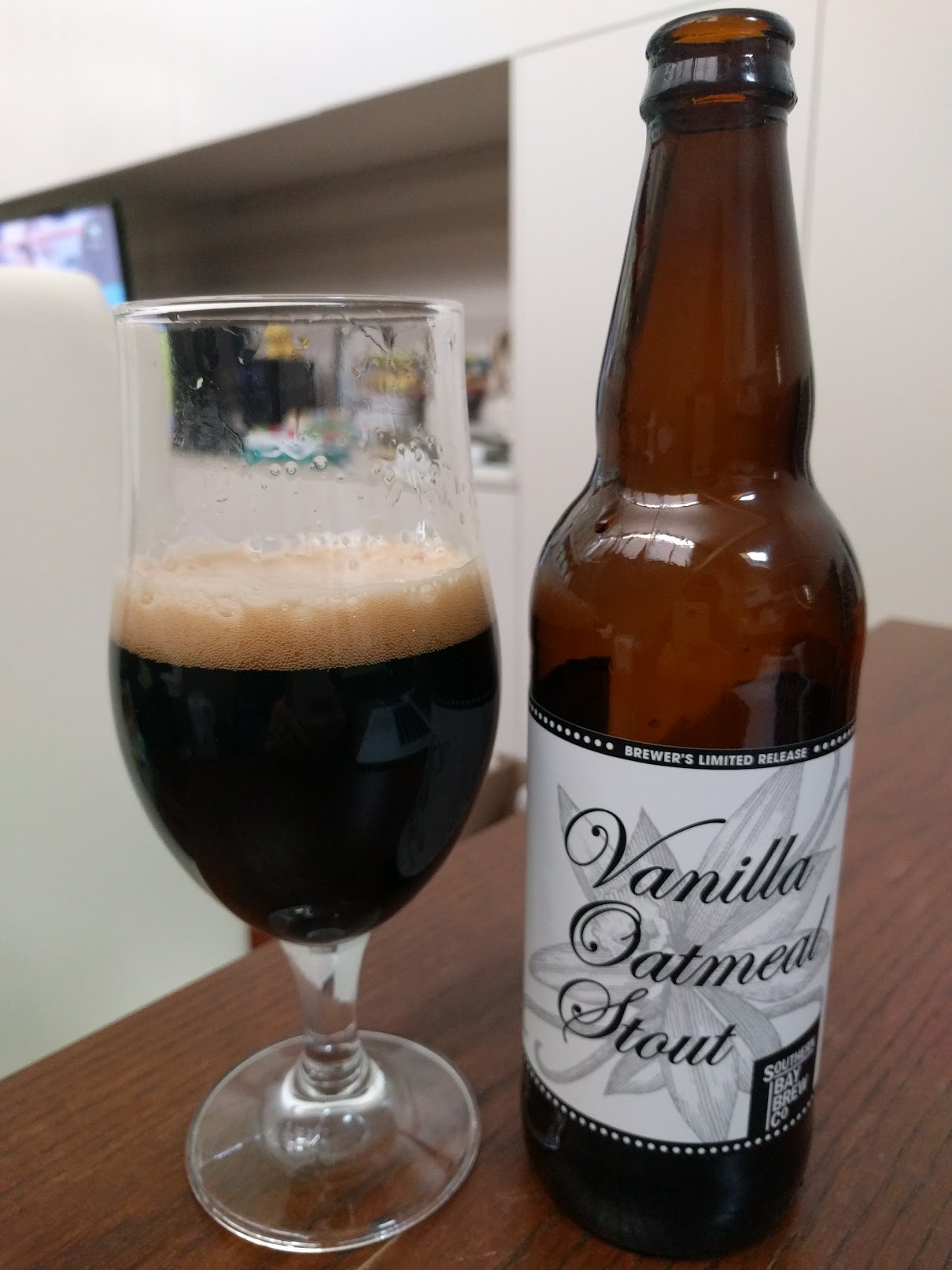 500ml brown bottle purchased from Slowbeer for me by Sam.

Pours a pleasant ebony black-brown, with a fluffy, slightly ephemeral head of beige that leaves good, sheeting lace. Carbonation is fairly fine but swift. The body looks like it has weight, but the lack on languor to the carbonation makes me question it. Looks decent all up though.

Nose is quite pleasant, with the vanilla very prominent, and providing a creamy sweetness to the aroma. There's just a mild dash of darkness on the back, which suggests perhaps some toasted brioche and turns the overall aroma a little towards aniseed. Overall, it's very sweet—I'm hopeful there's something to balance it on the palate.

Taste is also very sweet, but it pretty much survives it. It's vanilla-saturated from front to back, with the flavour providing a creaminess and the mouthfeel accentuating it. There is a slight spice or bite towards the back—maybe aniseed or bitter almonds, and a very slight dive towards roast. This is all masked somewhat by the vanilla, which is almost overwhelming throughout.

Overall, it ends up feeling a bit too chewy and almost sodden with vanilla. The vanilla might be a nice addition to another beer that needed some smoothness to even it out, but when it's the main event, the support act and the encore, it gets a bit too much.
appearance: 3.75 | aroma: 3.75 | taste: 3.5 | feel: 3.5 | drinkability: 3.25
Wolfgang Chang
5.6% Dunkelweizen from Southern Bay Brewing Company
Overall:
53 / 100
(OK)

Pours a slightly amberish hue, very hazy and pretty solid in the body. Head is creamy and full, looking very decent and leaving long streaks of lace. Carbonation is very fine when the glass is tilted. Looks good.

Nose: here we go again. Aniseed, clove, chai spice, sharp liquorice. Some variations here involve what tastes like powdered coriander root and a bit of pepper and celery. But really, I've had this too much nowadays—people need to come up with a new idea.

Flavour is similar. Anise is strong here, giving a stringy, rubbery character. Spicy and dull through the centre with a bit too much of the additives. Back is flat and thin. Aftertaste has more of the lingering Chinese spice.

Feel is light, and picks up a prickle from the spices themselves.

I'm starting to tire of this type of beer, especially in one like this where the base beer doesn't really lend itself to this type of spicy addition. It really doesn't work here very well at all.
appearance: 4.0 | aroma: 3.25 | taste: 3.0 | feel: 3.5 | drinkability: 2.75
Wolfgang Chang
5.6% Dunkelweizen from Southern Bay Brewing Company
Overall:
65 / 100
(Solid)
Pours an amber colour - could be darker - with loads of cloud. Head is dense and creamy and looks great. Pretty decent.

Smells spicy, with loads of coriander. Banana overtones, some aniseed as well, but yeah it has a nice dunkelweizen character but a big intrusion of witbier. Not bad though.

Caramel malt that develops nice cocoa dunkel grain character early. Spice is all over the mid and back with fennel and aniseed dominating. There's supposed to be rye spice which could account for some of it but it's not very strong in a distinct way. Not bad.

Body is quite pleasant, a little thin but smooth.

Brewed for GABS 2014, the notes in the guide say it's an "American Brown Ale with a whiff of smoke, a touch of sout and a fruit salad bowl of hops". Tried on-tap at the festival.

Pours a light amber colour (brown is probably pushing it slightly), but with a very pronounced haze that makes it look a little darker. Body is solid and firm. Head forms a decent full yellow/off-white cap that stays persistently and leaves sheets of lacing. It looks fine, except that this does not look like a brown ale.

Nose is good however, and we can start to forget any questions we might have. Peachy, hoppy and fragrant characters drive it forward into a big tropical sweetness. As it warms and the volatiles move on a little, some of the other notes come through: perhaps something peppery and a little savoury. It's really very pleasant.

Clean entry on the palate, maybe with just a touch of carbonic bitterness. Middle has the smoke coming through: with the sweetness it has the flavour of manuka or perhaps mango-habanero-minus-the-spice. It's subtle though and works in lockstep with the other characters. Finish has a very clean bitterness to it that develops into a touch of eucalyptus with the smoke on the aftertaste.

Light feel, but with a smoothness that helps integrate everything.

Smells saisony. Lots of funk with barnyard, horse characters and a touch of cedar wood. Some dry chardonnay-oak characters with a touch of rubber on the back. Savoury, funky, good.

Lots of rubber on the palate as well. That vinous character continues with chardonnay oak and some dry champagne notes. Lots of barnyard funk throughout but particularly on the back - funky, a little bit off, but fresh and pleasant. Not much peach which is a shame but it's a very decent saison.

Mouthfeel is surprisingly full, quite bitty from all the cloudy suspension. Not bad.

Tastes a little like an aged riesling, but plenty of decent beery saison characters as well. Nice.
appearance: 4.0 | aroma: 4.0 | taste: 3.5 | feel: 3.5 | drinkability: 4.0
Le Petit Tronc Avec Pêche
6.6% Saison from Southern Bay Brewing Company
Overall:
65 / 100
(Solid)
This was a version of SBB's regular Petit Tronc saison that had been matured on peaches. I heard a rumour that Southern Bay's original beer for GABS had not worked out, so they just threw this together with some Petit Tronc they already had sitting around. But it was just a rumour. Tried on-tap at GABS 2013 in Melbourne.

Pours an orange-tinted yellow with solid hazing. Body is solid enough for its 6.6% weight. Head is a fine white, full, but filmy crest that leaves lacing in minimal streaks down the glass. Looks decent.

Sharp metallic characters on the nose, slightly yeasty and intense, with some overlaid characters of fruit skin. From here comes a hint of funk and acidity that works brashly against the metallic character. The fruit character is more apricot than peach to me. Some saltiness comes through as well. Not bad.

Spicy and plastic on the front-palate, before the sharp fruit comes through mid palate with a slightly unsavoury over-ripe, rotting, fermenting character. Most everything drops out on the back, leaving it light and quite crisp, with some lingering fruit, and a strange metallic aftertaste.

Feel is light, but rounded.

Overall, yeah, it's interesting enough. Not bad, but also weak in some places. Although I've Le Petit Tronc before, I don't really remember it (and didn't review it), but I'd like to see how the peach version compares.

330ml bottle purchased from Slowbeer in Melbourne. I first tried this beer, I believe, at the SBB brewer's dinner at Bloodwood in Newtown during Sydney Craft Beer Week. This is a revision.

Well, it is indeed über pale, pouring a very light gold colour, with some solid hazing. Head is a fine film of white, sitting consistently, but not persisting that much. Carbonation is powdery and fine. Some lacing when tilted. Overall, it's a good looking beer.

Nose is mild and light. Slight grainy characters, a bit of rustic funk, but very minimal hop character, which is disappointing for a pilsener—perhaps just a slight grassy overtone, or something a bit herbal. It's pleasant and light, though, and that's not bad for the style.

Taste is clean and fresh. Mild grain characters, with a pleasant overtone of apricot and some clinging sweetness on the mid-palate. On the back, it drops out nicely, leaving a dry, clean finish, with some lingering fragrance. Really, it's very light, fragrant and tasty. It has some pleasant flavours, but stays true to its stylistic roots. Nice stuff.

Very drinkable, light and tasty. I'd be very happy indeed to have this as my regular drinking session brew. It's well-made, clean, light but very pleasant, with some real interest to it. I really like it. Bring on more craft lagers!