Smells gorgeous; big tropical notes with some mango, pineapple and passionfruit as well as apple and pear character. Bit ungrounded, and my question is whether this is really English in character. But really pleasant.

Taste is good, and builds on the nose quite well. Basic biscuity malt base, then develops those nice fruity characters from the hops, with apple, pear, mango, apricot and passionfruit all making a nice fruit salady mid-palate. The manuka comes through on the back with a slight herbal character and a touch of pine wood. Really quite enjoyable.

Full body, slight tingle from the carbonation which could be mellowed a bit more.

Yes, this is a nice beer. Again I'm a bit confused by calling it an English IPA because the hops seem to be quite new world in character. But the herbal sprucey notes really balance well.

Smells as I expected I guess. Some apple/pear fruit character with a fair undergrowth and herb note on the back as well. For some reason it also smells mostly oaky, sweet. Not bad.

Fruity palate, too. Notes of apple and pear upfront that grows in tanginess to a slight lemon zest on the late-mid. Quite sweet base lingering throughout though, and notes of capsicum and maybe some pepper on the back. Kind of musky, not bad actually.

Decent mouthfeel, for the style. Fluid but a fair bit of presence in the mouth.

Slightly biting herbal bush notes on the nose, mostly with a crack of vegetative pepper. This is accentuated with a slight hint of lemon peel as well. It's quite interesting and quite pleasant.

Front of the palate is slightly medicinal, with some tart fruit and a fragrant spiciness through the centre of the palate. Hint of smoke comes through around now as well, working with the herbal qualities to give a touch of bay leaf and herbal spice like rosemary perhaps. It's very nice. Aftertaste lingers with a fine but thin thread of the spice and smoke.

Smells earthy, with a big character that seems tea-esque? Yeah, green tea. Herbal characters, with some light caramel grain and maybe a light touch of smoke. Root vegetables. Not bad.

Sweet palate all over the front. Caramel grain with a touch of chestnut. Slightly tangy on the back, with a light herbal note. Mostly just tastes like that conventional 'beer' character, maybe slightly chemical. Meh.

Body is thin, some light carbonation. Not bad. 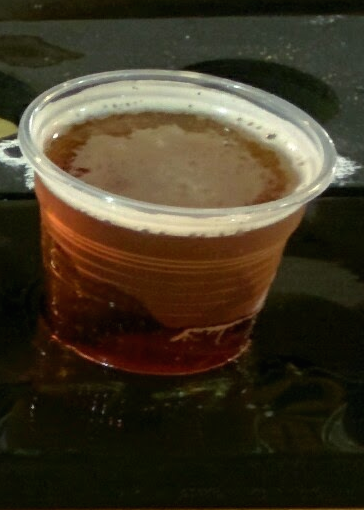 Tried on-tap at GABS 2014 in Melbourne. This is a blend of other matured Mussel Inn beers centred on a barrel of their Manuka ale.

Mild whiffy sherbet character comes through on the nose—although not a real acidity. Slight woody notes and some other mild organics come through as well. Smells pretty decent.

Taste has a light tartness on the front which becomes something of an apple-scented astringency through the middle. Back is clean but still with that mild bite. On the finish is a little bit of bitterness giving a light grapefruit pith kind of character. Not bad.

Feel is thick but fairly mild. It works okay with the rest of the beer.

Overall, this is decent stuff, but Mussel Inn have done some standout beers in recent years and although it's good it doesn't feel quite up to the same standard. That's not to say it's not worth trying—but try it on the way to sampling some of their others as well.
appearance: 4.25 | aroma: 3.75 | taste: 3.5 | feel: 3.0 | drinkability: 3.5
Bush Baby
5.0% Spiced Beer from The Mussel Inn
Overall:
77 / 100
(Excellent)
Pours an amber colour, slightly cloudy with off-white foamy head. Not bad-looking.

Smells sweet and spicy. Rye grain upfront before some sweet cinnamon with a touch of coriander, nutmeg and a decent grapefruit tanginess. Quite nice.

Taste starts out quite malty sweet, but midway it gets rolling in a big way. Clove notes come up with a touch of lemongrass, and then just all weird, cooky spice notes that I just don't recognise. Don't know if I can pick it as distinctly NZ spice, but it's a unique experience and very nice indeed.

Decent body with just a touch of carbonation tingle. Nice.

Beautiful palate as well. Spicy entry with a rounded richness and a smoke character which gives it a surprising brightness. The sweetness comes through the centre, smoothing it while spicy characters of cinnamon and manuka honey come through. Towards the back there's a suggestion of rosewater, giving a Turkish delight hint that stays while the malt drops out, leaving it dry and light, bright and balanced. It's gorgeous stuff.

Feel is very smooth, but rises and falls with the flavours, meaning it ends up with a pleasant cleanness on the back.

Overall: I really like this. It's clean and bright, but also extremely interesting. An absolute cracker from these guys who I'm always pleased to see over this side of the ditch.

Pours a reddish amber colour, slightly cloudy with foamy cream-coloured head. Alright look. I like the reddish tinge to it.

Massively smoky and woody on the nose. Smells quite a bit like a forest fire. Slightly meaty, but mostly wood. Not too overwhelming or muddy, just nice handle on it.

Taste is very malty, which kind of mars it a bit. Smoke is noticeable but not quite as strong or complex as on the nose. Kind of unpleasant sweetness with smoke floating on top of it. SPicy wood, with more spice than smoke coming through. Bit incoherent and a bit disappointing.

Decent body; bit of carbonation feel through but not too much.

Has a weird candy taste hanging around here. Not nearly enough smoke on the palate but there's enough there to throw it a bit off-kilter. I've had better.

On-tap at the GABS festival in Melbourne. This was called a "Smoked Manuka Beer", brewed with manuka leaves smoked over manuka sawdust.

I'll say this much: it isn't much to look at. A dirty amber gold colour, hazed with some chunky residue. Body is very light, and the head is almost non-existent, forming just some insubstantial yellowish bubbles. Pretty average looking brew.

Light floral entry on the palate, with some hints of rose petals, before the big smoky, gooey, fatty bacon and barbeque characters come in on the mid-palate. Finish is clean and lip-smacking, making a direct exit to a delicious beer. Feel is extremely light and could use more depth.

Such a weird amalgam, and one that works so well. I love what they tried here, and even better is the fact that they pulled off the attempt with such success. Great stuff.

Tried on-tap at the Local Taphouse in Darlinghurst during the Kiwi SpecTapular.

Pours a hazed, deep golden colour, with a fine film of head on the top. Lacing is pretty decent, forming thick patterns down the glass. Very fine carbonation, and an extremely languid bead. Looks great.

Nose is unique and very exciting. Fresh sweet citrus characters blend juicily with a vanilla orchid note and a pungent character of lavender. It's a weird combination, but gorgeously unique, and it works beautifully.

Milder on the palate, but with very similar characteristics. Fresh vanilla, smooth but buoyant floral notes, limey citrus and sweet pastry. Only a light body to support it, but these are all rather subtle flavours. It's smooth and fresh. Lovely.

A great brew, and a stylistically challenging, but very flavoursome witbier. I look forward to trying others from the Mussel Inn.

Taste is slightly less successful. Starts tart with floral notes, then develops that woody sawdust character that is actually very sweet on the back, with a reall sharp resinous note to the finish. Not bad, but could use more Belgian character, as the wood and consequent sweetness tend to dominate a bit too much.

Feel is sparkly, quite full. A bit dry on the back; decent.