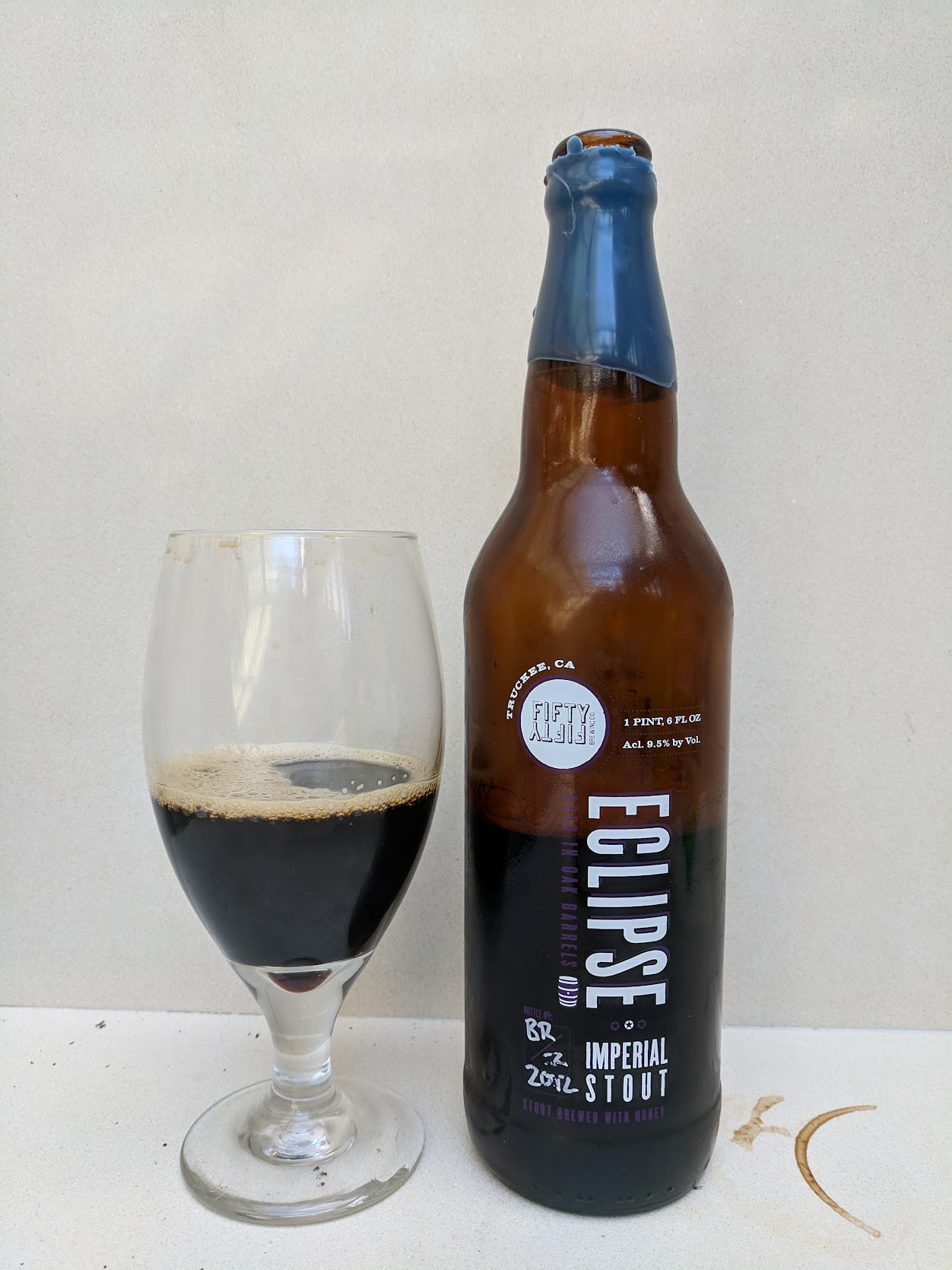 650ml wax-capped bottle purchased from The Willows Market in Menlo Park, CA. This was the 2012 vintage.

Pours a lightly coloured brown-black, with a gauzy head of beige that leaves minimal lace. Body is a little bit thin, and the beer is pretty flat, but at 6 years old, that's perhaps not a surprise. It certainly looks aged, but it also looks like a bit of a disappointment, to be honest.

Nose is decent, but not extremely exciting. It has a thin chocolate biscuit quality to it, along with some faint characters of cherry booze and rose. It is rather smooth though, and as it warms it gets some characters of amaretto. It definitely has some good things to it.

Taste is also pretty smooth, and here I think it makes a bit more sense. It is still a little thin on the palate, but there's also not characters which clash with this. Instead it has smooth, light coffee and chocolate mocha notes. Some kirsch on the back with a touch of tannin.

In the end, it actually has a smoothness that helps the drinkability, and it is quite coherent. But I'm not sure that it's the kind of beer which is a top-of-the-line offering. And at the price point you're paying for any of the Eclipses, you kinda want them to all be ground-breaking.
appearance: 3.0 | aroma: 3.75 | taste: 4.0 | feel: 3.75 | drinkability: 4.25
Eclipse (Four Roses)
11.9% American Imperial Stout from FiftyFifty Brewing Co.
Overall:
83 / 100
(Exceptional)

650ml brown bottle purchased from Ales Unlimited in San Francisco. Shared with a bunch of Sydney beer dudes for our annual 2015 Clout night.

Pours a lovely silky deep brown—surprisingly, it's not genuinely black, but a deep chocolate brown. Head is a lovely fine mesh of mocha that leaves specks of leopard lacing. Carbonation is very fine through the thick but silky body. Looks good.

Nose is really smooth and slick. Vanilla and very mild coffee roast, with the vanilla lending silkiness to everything. As it warms, it becomes a more connected coconut and coconut mess—sweet and burnished with a richness slashed apart by a bright, fragrant note. It's very impressive.

Taste is also really good. Smooth entry, with plenty of roasty characters, but quickly run over by velvety richness. Towards the back, there's a slight twinge of acidity, which makes the finish feel a little bit more empty than it might be otherwise. But this may just be the barrel—there's certainly plenty of the oak characters to add complexity to the brew. Surprisingly though, there's not a really robust roast character, which makes the finish feel a little more abrupt than it might be otherwise. It's still really good overall though.

Really smooth and very impressive. There's plenty to enjoy in this brew. I'm not sure it's quite the white whale that people make out, but it's certainly an excellent beer—well-made and with lots to offer.
appearance: 4.5 | aroma: 4.5 | taste: 4.25 | feel: 4.0 | drinkability: 4.5
Healthy Spirits 15th Anniversary Ale
12.0% American Strong Ale from FiftyFifty Brewing Co.
Overall:
69 / 100
(Solid) 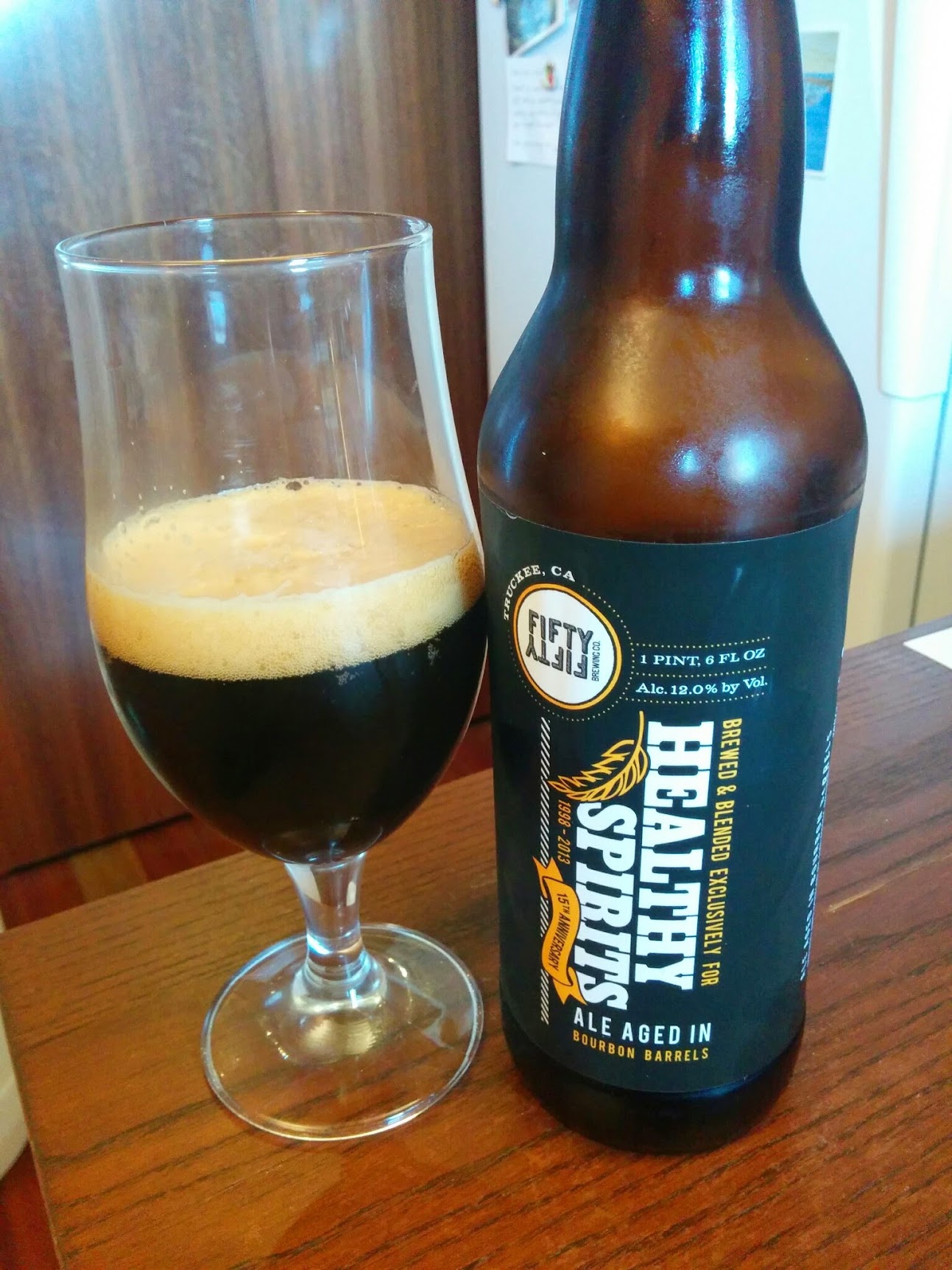 22oz bomber purchased from (where else) Healthy Spirits in San Francisco. Brought back to Sydney Australia, where I cracked it open with Sam.

Pours a dark, slightly murky brown colour, but surprisingly fluid in the glass for its 12% ABV. Head is a very fine and quite full crest of beige, that sits fairly firmly on top of the glass, leaving small specks and streaks of lace as it goes down. Carbonation is fine but fairly vivacious. Looks good.

Nose is solid stuff. Pleasing bourbon barrel characters give it some vanilla and wood, but there's a rather pronounced grassy tone as well that leavens it somewhat, making it seem a little bit sharper than it is. Booze is also noticeable, but it mingles with the roasted, darker characters to provide an almost coffee sharpness. It's certainly interesting at least.

Taste is pretty light on the front, with the feeling of heat that leavens it with a weird alcohol character. This mellows a lot by the back, when some smoother bourbon oak, vanilla and chocolate characters come through. Towards the finish we get a light aerated port-like character—slightly oxidised, and with the first hint of those grassy tones from the nose.

Feel is extremely light throughout—I'm not sure I've ever had a beer of this strength which quite feels as airy and fluid as this does.

Overall, this is a flavoursome beer. But I'm not sure all of the flavours work. There's plenty going on, but there's a slight lack of integration—with something slightly more coherent this would be a phenomenal beer. And really, this should be a phenomenal beer rather than just a good one.
appearance: 4.0 | aroma: 3.75 | taste: 3.75 | feel: 3.5 | drinkability: 3.75