Pours a sedimenty dirty bronze colour. I noticed the sediment cloud forming as I poured, creating at the same time a nice frothy off-white head, which has sunk to a thin but dense film. Lacing is pretty nice. Looks alright, if a little odd.

Smells oxidised, but pleasant for all that. Noticeable fruity characters with currants, raisins, maybe a touch of cherry. Maybe I'm just in the festive mood so my mind's going that way. Treacle as well, with a slight brandy booze character hiding behind it. Smells like it's got a bit of age on it, but it's aged fairly well, too. Retains a fair bit of character.

Taste is similar, and a bit less pleasant really because the age really shows through here in a kind of dead, spent grain kind of way. Some nice boozey character late-mid, along with some rich dark fruit - cherry, raisins and figs, and some light brown sugar character. But the front is a bit wet cardboardy and the back is a bit earthy and wooden as well like it's had the malt character hammered out into a fibreboard pastiche. It tastes like it may have been a superb beer at some point but it's just been stored too long in a damp cellar.

Mouthfeel is pretty decent, actually. Obviously a bit of weight behind this; it's got a good malt body yet with the age, any residual booze heat has mellowed out so it goes down nice and smooth. Ultimately I'd rather have a lively palate and a hot mouthfeel than this smoothness on a muted palate, but still. 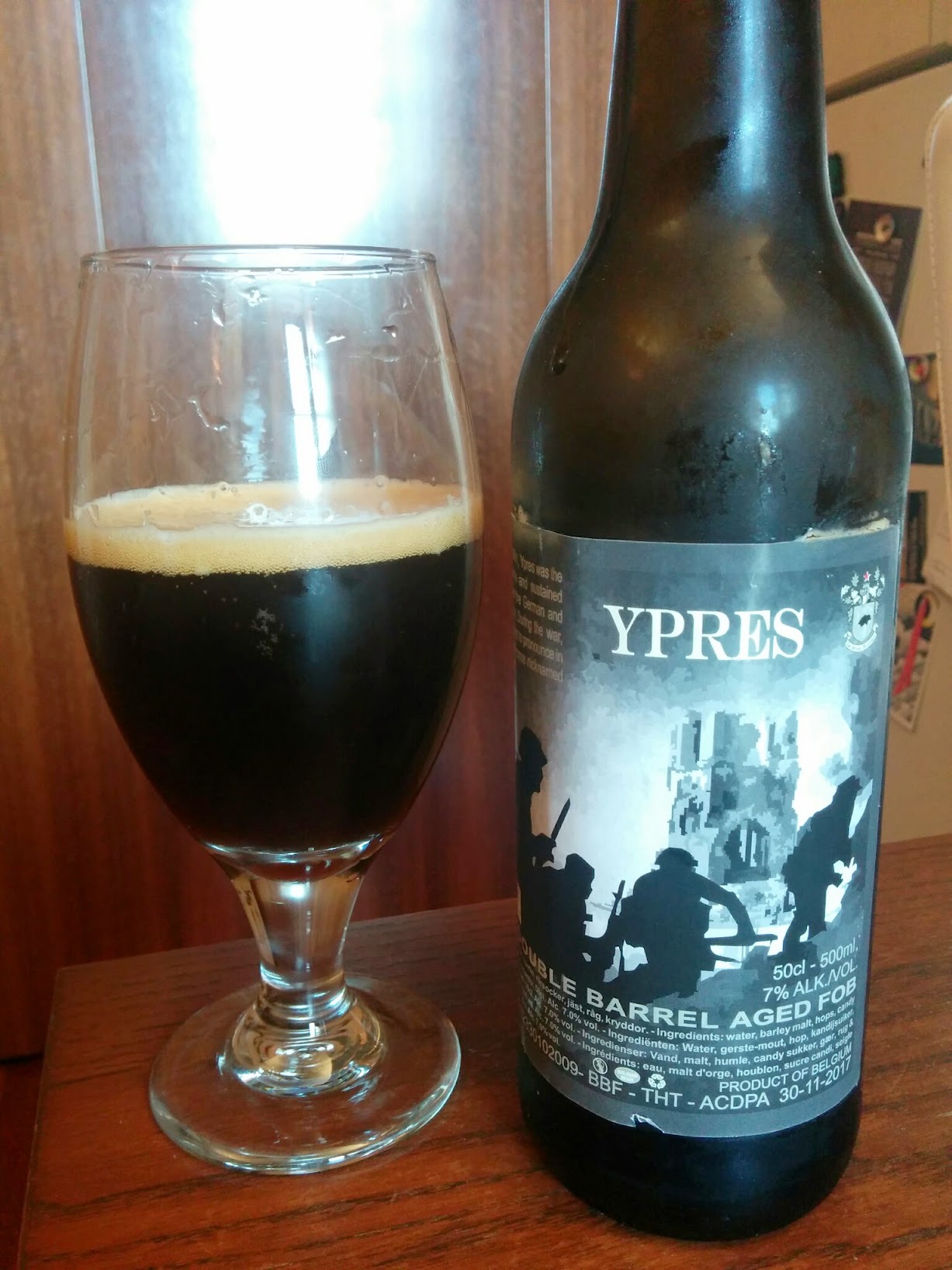 Pours a dusty brown colour, lighter than expected in hue early on, but forming a rich ruby tone in the centre of the glass with some opacity from hazing. Head forms a very mild ring of yellowish beige that stays quite fine and persistent, but leaves little lace. Carbonation is swift but very fine, forming a powdery mass of excited bubbles when tilted. Looks pretty good.

Nose certainly lacks tartness, but makes up for this in pure unadulterated vanilla-tinged oxidation. OK, the vanilla tinge is an adulteration. Indeed, it's odd for this—the oak gives it the aroma of an BA Imperial Stout, but there's this persistent twang to it from the oxidation that leaves it feeling very thin. Some mild suggestion of tartness does come through as it warms (and perhaps only after I've tasted it), leaving a mild balsamic reduction quality to it, with hints of pepper and ink. To be honest, I was unimpressed when I first took a whiff, but the longer it goes on and the more it warms, the more complex it seems. By the end, I'm suitably impressed.

The taste certainly lets the Oud Bruin characters come out, with a restrained acidity causing some rather vinous qualities for the palate. Indeed, there's a thin bite to it that seems certainly more wine-like than beer-like, even accounting for the acidity. The oak accentuates this as well, coming through on the back with a rather woody finish. Finish is rather tannic, with a bit of darkness permeating the oak, and leaving the afterpalate very dry. Some raisin or currant sweetness tries to balance things in the latter half, but it's fighting a losing battle.

Feel is loose and thin—not bad for a sour, but it does accentuate the fact that it's very sharp. I can't help but feel that a slightly thicker feel may aid the beer, not the least because a bit of additional body and sweetness would probably promote more complexities in the flavour.

Pours a murky, pleasant brown, with a rich red hue like tokay. Head is fairly minimal, but actually persists as a fine, still film of yellow-grey. Body has some heft to it, for sure, and when tilted the carbonation has a tough time wending its way to the surface. Minimal lacing, although the body has legs of its own.

Taste is also very good. Smooth entry, well balanced between true sweetness and the sharpness from the booze. Slight spicy hints prickle the back, giving soaked sultana and pickled ginger notes. Slightly brusque metallic finish completes the picture, leaving a tad too much medicinal character in the aftertaste. It's still very good though.

Feel is a little light, and made to seem a bit thinner by that sharpness.

Pours a deep, sinewy black-brown, oily on entry to the glass. Head forms with little coercion, forming a thick deep brown head of fine bubbles. Lacing is patchy, body is rich, although not holding a lot of carbonation. Looks good.

Nose is gorgeous. Delicate milk chocolate overtones, laced around a sweet vanilla oak and toasted coconut richness. Slight roast comes through leavened with a heady booze tweak: it leaves it slightly buoyant and a little spicy.

Taste is rich and dark: burnt toffee sweetness on the fore, with a nuttiness coming through closer to the back, which develops into coffee and char. Clinging cherry booze character structures the whole thing—or perhaps its better to say that it invades the structure—it's always present from front to back and side-to-side. Finish is remarkably clean: the booze helps everything evanesce, leaving not much roast or bitterness.

Feel is smooth and slick, but almost frothy as well: it's as though the volume increases in the mouth, leaving it lighter, but fuller at the same time.

Tastes very Belgian. Slight sourness, with spicy phenols. Earthy spice, with a bitter earthy taste. Woody and smokey as well, with a medicine character on the back. Nectarine as well. there's definitely a lot of craftsmanship here, but I'm not getting anything amazing or even particularly complex from it.

Mouthfeel is very heavy and quite boozey, but reasonably silky. Not bad.

A good beer, but I'm really surprised to see the overwhelming love for it here. It's possible the bottle may have been old, but I simply didn't really connect with this. Either way I don't think my disappointment will be anything but a slight statistical blip in the lovefest here, so don't mind me, I'm just passing through.
appearance: 4.0 | aroma: 3.0 | taste: 3.5 | feel: 3.5 | drinkability: 3.5
Struise Mikkeller (Elliot Brew)
9.0% Double IPA from De Struise Brouwers
Overall:
61 / 100
(Decent)
Bottle purchased in California.

Nose is piney and resiny, with a really sharp, almost isohop bite to it. Under this is a sugary sweetness; a rather treacle and light brown sugar note. The hops just yell "HOPS!", there's very little in the way of nuanced fruit or fragrance. It's somewhat confronting, and a little one dimensional.

Taste is smooth initially, before the sharp, direct spike of hops comes through and slices the palate in half. Some vanilla comes through, giving a fragrance, but no smoothness, and the relatively light body struggles against the hops, meaning it feels very unbalanced. Feel is surprisingly light, and the booze on the back adds some vapour-like astringency. Phewy.

It's a bold, rugged and unapologetic beer, there's no doubt about that. But it gets to the level where it's actually a little undrinkable. I can believe it's the hoppiest beer ever brewed in Belgiumâit's one of the hoppiest beers I've had in recent memory.

Bottle at Kulminator in Antwerp, tried directly after the Black Damnation 1.

Pours a dark black brown, with a huge head when poured. Crunchy and thick mocha-brown bubbles form the crest, which also leaves patchy but substantive lacing. Body is pleasantly thick and the carbonation is fine. Looks good.

Nose is spicier than the number 1, giving slight pepper and capsicain characters along with a smooth oak note and some bittersweet dark chocolate. The spice is the big difference to me, coffee is not as dominant as I thought it might be. Not bad.

Taste is smooth, but slightly thinner than the original, with a dark, acerbic bitterness stomping through the centre. Characters of coffee and burnt grain come through here and dominate, but it therefore misses out on some of the more delicate flavours of oak, and the creamy sweetness that was present there. Feel is also a little less rich.

Still, this is a very good beer, but I was expecting more. People seem to rate this one more highly than the original Black Damnation, and I just didn't see it in comparison.

Bottle purchased and consumed at Kulminator in Antwerp.

Pours a deep black. Black. Black. Head is very fine and soft. No lace, but the body is so lovely and thick that the body itself almost sticks to the edge of the glass. Static carbonation. When tilted, however, you realise that it's slightly translucent at the edges. Not bad though.

Taste is roastier and more bitter and acridâhere the Russian darkness comes through, but in a lively way, and still melded with a sweetness that suggests dark fruits, coffee and milk chocolate. The bitterness of the roast character cements and anchors the palate in the way bitter hops do in a good IPA.

Great RIS. The dark roast character ensures it falls squarely here. Wonderful to see a brewers around in Belgium and the Netherlands like De Struise and De Molen stretching the boundaries of beer.

Tasted in bottle at 't Brugs Beertje in Bruges. When I ordered it, with barmaid got a touch of excitement in her voice and told me it was a really good dark beer. It was clear she approved.

At 't Brugs Beertje the lady who served me said it was a lovely black beer from De struise. You could tell she approved.

Pours, indeed, a dark black brown colour, deeper than most Belgians, red when held to the light. Head is a foamy light mocha colour. Minimal lacing, but good body.

It's a truly wonderful Belgian brewâwarm, caressing, deep, full, complex. A bigger and more refined one is hard to find.

The barmaid is not alone. I approve too.

Bottle at 't Wagstuuk in Antwerp.

Pours, as the name suggests, black and deep. It's a lovely colour, crisply brown at the edges. Head is foaming and frothy, a pleasant cookie brown. Lacing is maze-like and intricate. Body is heavy. Looks very good indeed.

Nose is sweet, but spicy, with big liquorice characters dominant. There's a hint of cherry to it and some dark high-cocoa chocolate. It's a lovely dark beer from BelgiumâDe Struise is one of the few places I'd expect to find these sort of characters; the Belgian establishment seems to shy away from them.

Taste is also good, but the feel is quite thinâmaybe here the Belgian "light is better" influence is coming through. Liquorice, dark grain, a touch of charred malt, and some astringent booze again with a touch of the kriek to itâalmost like kirsch. Booze is more prominent with the lighter body.

I'm starting to dislike the Belgian philosophy of putting sugar in beers to lighten the palate, which I can only assume is what happened here. A big beer like this needs weight behind it to balance the flavour.

This is still a good beer. But it went close to being a GREAT beer.