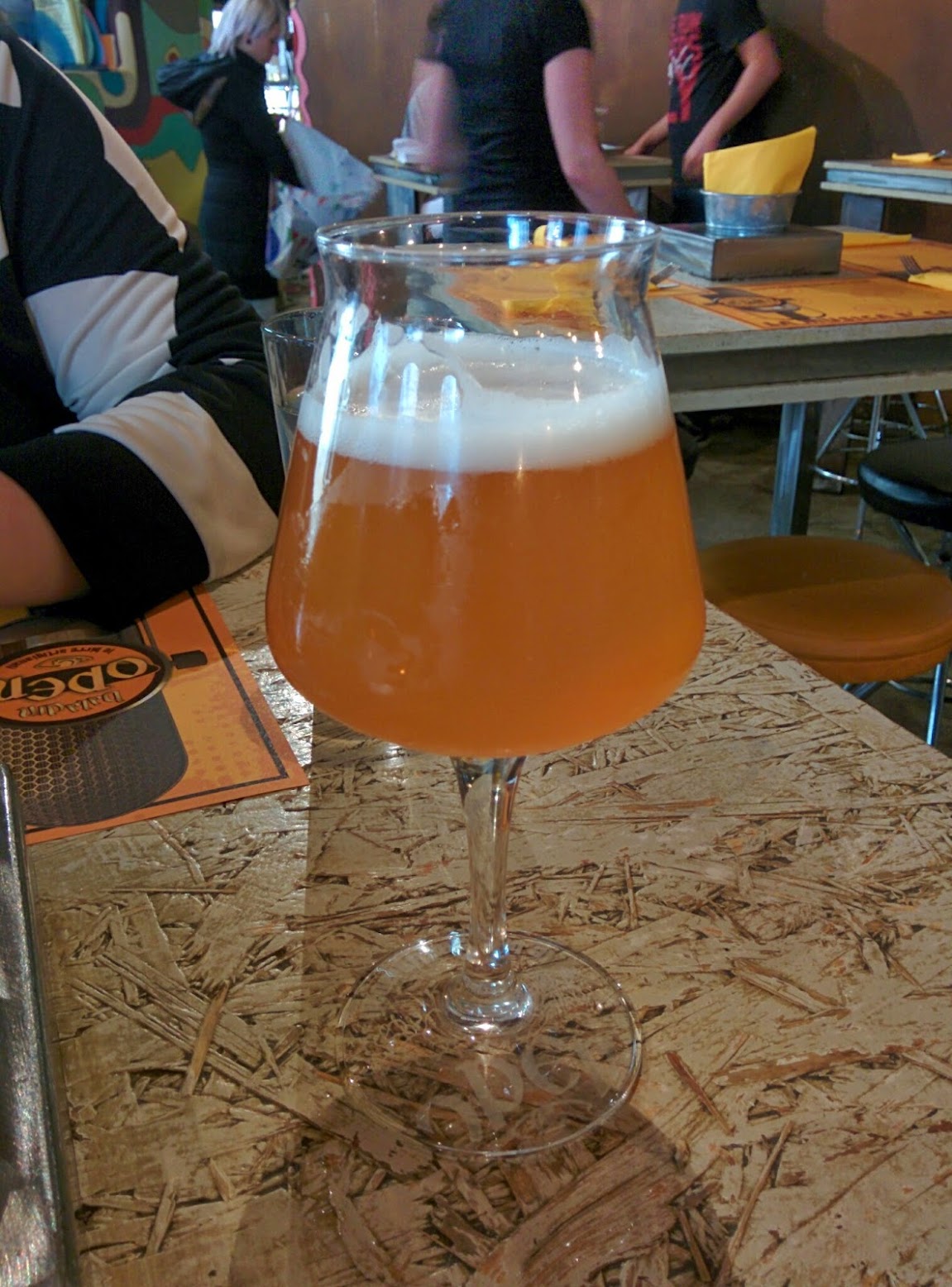 Nose is great. Spicy and bright initially, with peppery, earthy undertones to it. Hints of ester notes from the yeast come through along with some banana/clove phenols. Clean and grassy all up, but with some rounded sweetness as well. Very good.

Taste is also very good indeed. Sweet and spicy, clean but bright, and filled with classic farmhouse characters. Spicy, pepper and a noticeable dash of grains of paradise. Slight rosewater notes, earthiness and herbal undertones. Despite all this, it's not terribly funky or organic: it just uses the style and additions to its advantage.

Biting finish gives it more organic notes, but it's smooth in the feel—the sweetness holds it together but the spice breaks out and punches through with its intensity. It's a nice combination. The feel is slightly prickly from the spice characters.

Superbly drinkable stuff—it's really very drinkable indeed, and really genuinely well-crafted. It's a saison near the top of its game, with so many of the characters that make a saison such an amazing style of beer. I love it.
appearance: 4.0 | aroma: 4.0 | taste: 4.25 | feel: 4.25 | drinkability: 4.25
Baladin Nora
6.8% Spiced Beer from Birrificio Le Baladin
Overall:
68 / 100
(Solid)
Pours a dirty straw colour, plenty of cloud and hints of floaties. Head is nice: dense but large bubbles and retaining a modest crown. Lace is a bit disappointing, but otherwise nice.

Smell is fruity and fairly fresh. Plenty of packham pear, apple and a hint of banana, with a mild phenolic spice at the back, almost aniseedy actually. Needn't be there really, but the rest of the aroma is nice enough.

Taste is also pretty fruity most of the way through. Lots of pear juice, sundowner apple and a hint of banana. Slight vanilla sweetness late and a dry, mildly spicy finish with a touch of green peppercorn and a big pull from that continental yeast. Maybe some clove on there late and some nutmeg; golden syrup as well? But yeah, pleasant wheaty beer characters, nothing too special though.

The drying is all the way through the palate. The yeast just cuts through from page 1.

A pleasant, quite sweet beer, lots of wheat beer notes here. Most of the flavours here are really lifted from page one of "how to brew a wheat beer".
appearance: 4.0 | aroma: 4.0 | taste: 3.5 | feel: 3.5 | drinkability: 4.0
Baladin Nora
6.8% Spiced Beer from Birrificio Le Baladin
Overall:
83 / 100
(Exceptional)
Shared with @LaitueGonflable and @tobeerornottobe.

Pours a lovely bright yellow colour, but hazed with some disturbed yeast sediment. Head is fine and bubbly, and the whole thing has a very refined, champagne-like look to it. Very fine carbonation, and a lovely depth to the body, that sits with the light colour, again giving it that sophisticated character. Nice.

Nose is bright and peppery, with spicy fresh characters and a sharpness like cedar barrels. It's clean and fresh and very, very excitingly fragrant. It doesn't have a huge amount of complexity, but it's really hard not to like it for what it is.

Taste is a lot more subdued, but here it comes back to the crisp dryness and the sophistication that it looks like. Very little of that cedar character, but here the citrus peel comes through really pleasantly, and it zings off the crispness on the back palate. Very smooth and clean.

Exceptionally fresh and drinkable, and very, very refined. It reminds me in some ways of a BiÃ¨re de Champagne. Certainly the dry finish and sophistication give it this character. The spices are so beautifully done. They complement the style and the flavour of the beer, and never seem like a gimmick. In fact, this beer almost makes you feel like this *is* how beer should be made.

Pours a golden orange colour with decent beige head that thins out quickly, leaving some decent lace behind. Appearance is cloudy and hazy, but otherwise flat. Lace could cling more. I like my lace clingy, like my women. Not great, not bad.

Nose is extremely malty, exxxtremely even. Huge caramel and brown sugar aroma with some fruity hints of apricot, almond and sultana. Definitely a malt bomb, could use more hopping. It's basically saccharine and sweet on the nose.

Taste is kind of the same, a lot of sweet grain coming through with notes of caramel and lactose on there. A slight tangy citrus flavour halfway through owes more to lemon squash than west coast IPA and the finish becomes sweet again with a very slight touch of bitterness lingering at the very back, slightly herbal but is more pronounced by the dessication of the feel as it goes down than any distinct bitter flavour.

Alcohol is not very noticeable, which might have been a good thing, but I think in this case, a more distinct warmth might give this a more pleasant, liqueury character, whereas now it's just sweet and flat.

I am disappointed but not surprised, as this bottle is a bit old. Watch this space for a re-review in the future with a fresher batch.

Pours a rusty orange-yellow colour, full of cloudiness, with a fine and lively head of white foam. Some collapsing of the head, and there's little lacing, despite the obvious heaviness of the body. Looks pretty good.

Fair amount of mustiness on the nose, mingled with an organic Belgian yeast character. Lots of sweetness on the nose as well, perhaps one of the precursors to raw sugar - treacle or molasses, something that keeps its organic genesis prominent. Pretty decent.

Very similar characters on the palate - the mustiness takes on a lightly bitter, slightly roasted character, which oddly jangles against what I expect, but the sweetness is prominent, and the round Belgian yeast also lends some spice and a touch of acetone. Some heat is noticeable on the back of the palate, and the boozy flavours come through on the aftertaste. Body is really good. Quite thick and rich, but with a lightness that ensures it doesn't get too heavy.

Yeah, nice drop all up - the booze and acetone could be subdued a little, but it drinks surprisingly easily. A very good Belgian style from a non-Belgian brewery, in any case.