Bottle given to me by Father for Christmas.

Pours a pale amber colour, light white foam around the rim for the head. Decent lace cling, but thin. Bit cloudy; looks more like a generic pale than a wheat beer, but not bad.

Smells phenolic, and quite spicy. Peppery, herbal. Yeah, medicinal, slightly organic and rubbery. Some honey and oatmeal on the malt. Pretty simple but pretty decent.

Taste is a little sour, disappointingly. Has a decent phenolic, maybe Belgian character upfront and all the way to the mid, but then the back has a slightly infected, off flavour. Not enough to believe it's actually infected but it's just slightly tart, mildly vinegary, like there isn't enough malt to balance the ale byproducts which just turn watery-acidic as a result. Not bad but the quality's all on the front and it's a bit soggy and thin on the back. So not a peak end.

A little thin in the body, but not a bad texture all told. Quite foamy and nice.

Bottle served to me blind by my Dad.

Smells grainy, a little adjuncty so quite sweet with a hint of metallic bitterness at the back. Honey; touch of melon too. Not great, but not offensive.

Taste is quite sweet; big sweet grainy note with honey and oatmeal upfront, develops some grassy bitterness midway that swells to the back. Retains that cloying sweetness towards the back though which gives it all a kind of dour stodginess, which is unfortunate. Not terrible, but clearly flawed and a bit insubstantial.

A bit dry on the body, very thin. Touch of carbonation sizzle. 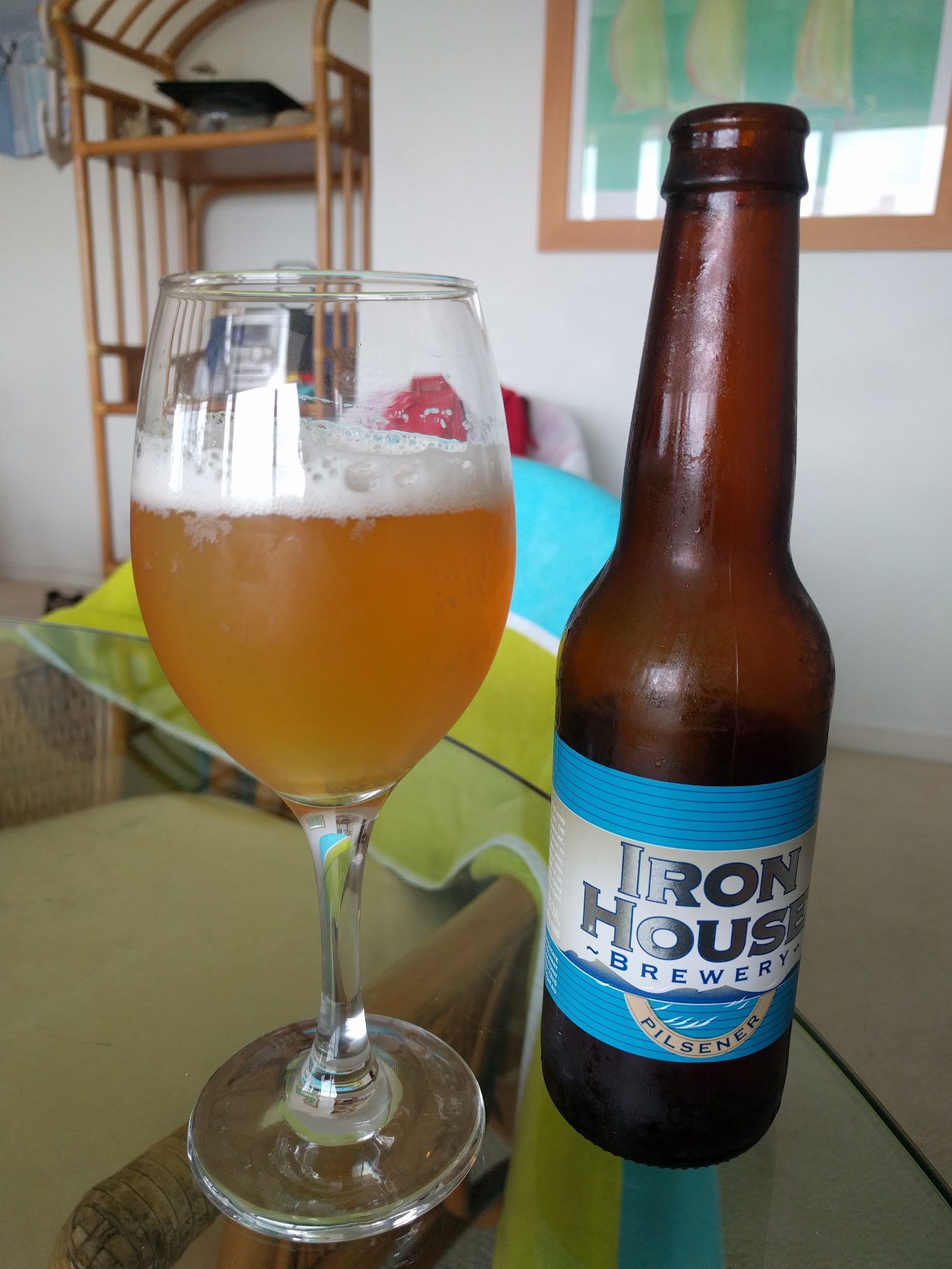 330ml brown bottle purchased somewhere in Tasmania by my dad.

Pours a very hazy pale golden colour, with a frothy, fairly fine head of white that cracks into large bubbles and leaves spidery lace. Carbonation is very delicate, and forms in masses of fine bubbling when tilted or swirled. Looks decent, but stylistically, at least, the haze is off.

Nose is not great. There's an immediate soapy skunk character on opening the bottle, but even once this blows off it has a rather grainy cereal note as its main beat. There are some fragrant organic notes that come through, but with the residual skunkiness it has the suggestion of "dumpster in direct sunlight". I'm not a fan.

Taste is pretty similar. The body is very light, which hides nothing, and there are some unpleasant notes that come through as a result. Mid palate has what I assume is the hop character, but which comes through tasting like tea tree oil with a slight acidity to it. On the back, the malt turns grainy, almost giving a faint corn flavour which sticks around as the lone note of the aftertaste, which isn't pleasant.

Feel is empty, but with a slight bite from the ghost of bitterness. 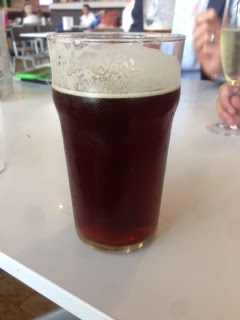 On tap at Hobart airport. You can quibble if you like about naming something a "Belgian Pale Ale" yet classifying it as a "Belgian Dark Ale" but look at the photo. LOOK AT IT. Ain't nothing pale about that, no matter what they and the airport bar staff call it.

Pours a dark amber, clear with steady bubbling. Head is beige, big density with decent sticky lacing, just clumps but they stick around. Could use more volume. And very dark for what bar staff told me it was.

Taste is quite fruity and medicinal. Cherry wine and plum notes; phenolic notes too with a fair medicinal edge mixing with sweetness from some vanilla, touch of cinnamon, with fig notes on the back as well. Feels a bit sharp at times but otherwise quite sweet, that doesn't blend or fuse together well. But decently to style otherwise.

Decent body, bit of texture to it. Slightly heavy. Leaves a little sharp.

Pours a dark cola colour, with some beige bubbles on top. Not a lot of head. Retains a thin film. Nice colour, feel like the head's alright in theory but it ain't a good pour by the staff here.

Smells chocolatey and roasty. Somewhat sour, with a hint of leather to it. Some herbal notes, maybe vanilla and a hint of lavender too, plus thyme maybe? Pretty decent, sweet focused porter, pretty appealing.

Taste is largely roasty but goes slightly on the sour side at times. Nice bitter coffee character with a touch of spice, but just dips unfortunately into that weak tart note. Very sour cherry flavour that might be welcome if it were well-rounded and felt intentional, but it's just a tartness without explanation, on that overall bitter earthiness. Coffee, toasty. But sour. It's a shame, I feel there's a nice beer in here somewhere.

Slight sizzle, goes down a little soft-drinky but OK.

Maybe a touch infected. Nice beer underlying but that tartness definitely mars it a bit.
appearance: 3.5 | aroma: 4.0 | taste: 3.0 | feel: 3.25 | drinkability: 3.25
Extra Special Bitter
5.2% Extra Special Bitter from IronHouse Brewery
Overall:
68 / 100
(Solid)
I'm assuming this is the same beer as on Untappd, but that hasn't been drunk/produced since 2013. Had this on tap at Hobart airport and was called an Extra Special but not sure of the ABV. Had to explain my review/rating to my boss as I went through as he was fascinated.

Taste is quite malty upfront, and pleasant. Big toffee notes, burnt sugar that develops a big earthy bitterness, quite dusty and a little peppery with a touch of rosemary and maybe turmeric. Finishes a little bitter with a slight astringency, then gets a nutty edge on the back. Pretty nice eEglish style, an odd tartness on the back which I don't like, if the bitterness solidified better I'd be very happy.

Decent body, not totally solid but fluid and pleasant. 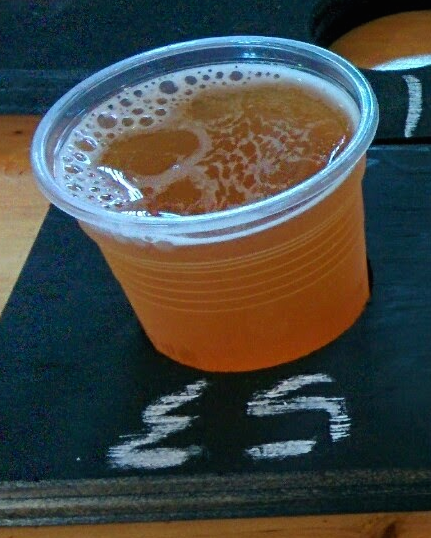 Tried on-tap at GABS 2014 in Melbourne. A Rye Ale infused with rooibos tea.

Pours a very pale orange colour with a solid body. Hazing is firm throughout although some carbonation is still visible. Head is just off-white leaving a firm ring around the glass. Looks pretty decent.

Very strong tea characters on the nose, with a big tannin note right off the bat. Slight spice comes through as well, along with some peach and apricot stonefruit notes and a slight hint of wood smoke. It's all pretty nice.

Light entry on the palate that quickly gets a peppery, tannic dose from the tea. This is sharp towards the back, but there's enough malt to smooth through to the finish. Here we get more of the tea: spicy and earthy. It's really nice all up. Feel is mid-weighted, which is quite pleasant.

Overall, this was a pretty damn good beer. The tea was strong, but it gave the beer its character and style. And it ended up being extremely drinkable. I enjoyed it a lot.
appearance: 3.75 | aroma: 4.0 | taste: 4.0 | feel: 4.0 | drinkability: 4.25
Holy Smoke
7.0% India Black Ale from IronHouse Brewery
Overall:
56 / 100
(Decent)
Pours a brown colour with slight cloudiness. Pale cream-coloured head, webbed out sparsely and not really retaining or leaving any lacing behind. Bit listless.

Smells smokey, and meaty. Bit of sourdough-tinged malt and touches of spice but it's just all smoked meat otherwise. Nice, but not really black IPA character.

Fairly malty on the palate. Caramel, with again a touch of sourdough. Big smoke comes through almost immediately, meaty and billowing. Pleasant character again but no real IPA-ness, some hops on the back might have taken this in weird and potentially amazing directions.

Body is OK, but the carbonation comes through very strongly, almost sharply.

Pours a hazy brown colour, very light in the body and looking rather dead. Head forms a very minimal sheen of whitish dullness on the top that leaves just a few specks of lace. No carbonation. It looks a little unappetising.

Nose is pleasant: smoke and piney resin coming through. Bacon bits mingled with eucalyptus. That's pretty much it, in fact it feels a little one-dimensional overall, but I find it pleasant enough.

Light smoky entry on the palate. A little bit light with a touch of water. Mid-palate has some spice, almost a weizeny phenolic character, before the hops get more of a look-in at the back: some spick, resin and a bitterness that drops out before the aftertaste. On the finish is a pleasant heady sweet bacon smoke character.

Feel is a tad too light.

Overall, though, this is good stuff. It's interesting, it develops in the mouth, and it has some pleasantly balanced flavours. I'm a fan.

Had on-tap at Preachers in Hobart.

Pleasant fruity hoppiness on the nose, giving a real citric zing of the American or possibly New Zealand variety. Some dusty grain in the background, but the sharper zesty characters win. Nice.

Taste is bright and quite fresh, but a little thin. Some pleasant bitterness on the back, giving a slight aspirin bite, but overall, there's not a lot of flavour to it - certainly no huge characters. But it's pleasant enough and quite fresh.

A nice beer. Not particularly exciting, but decent.