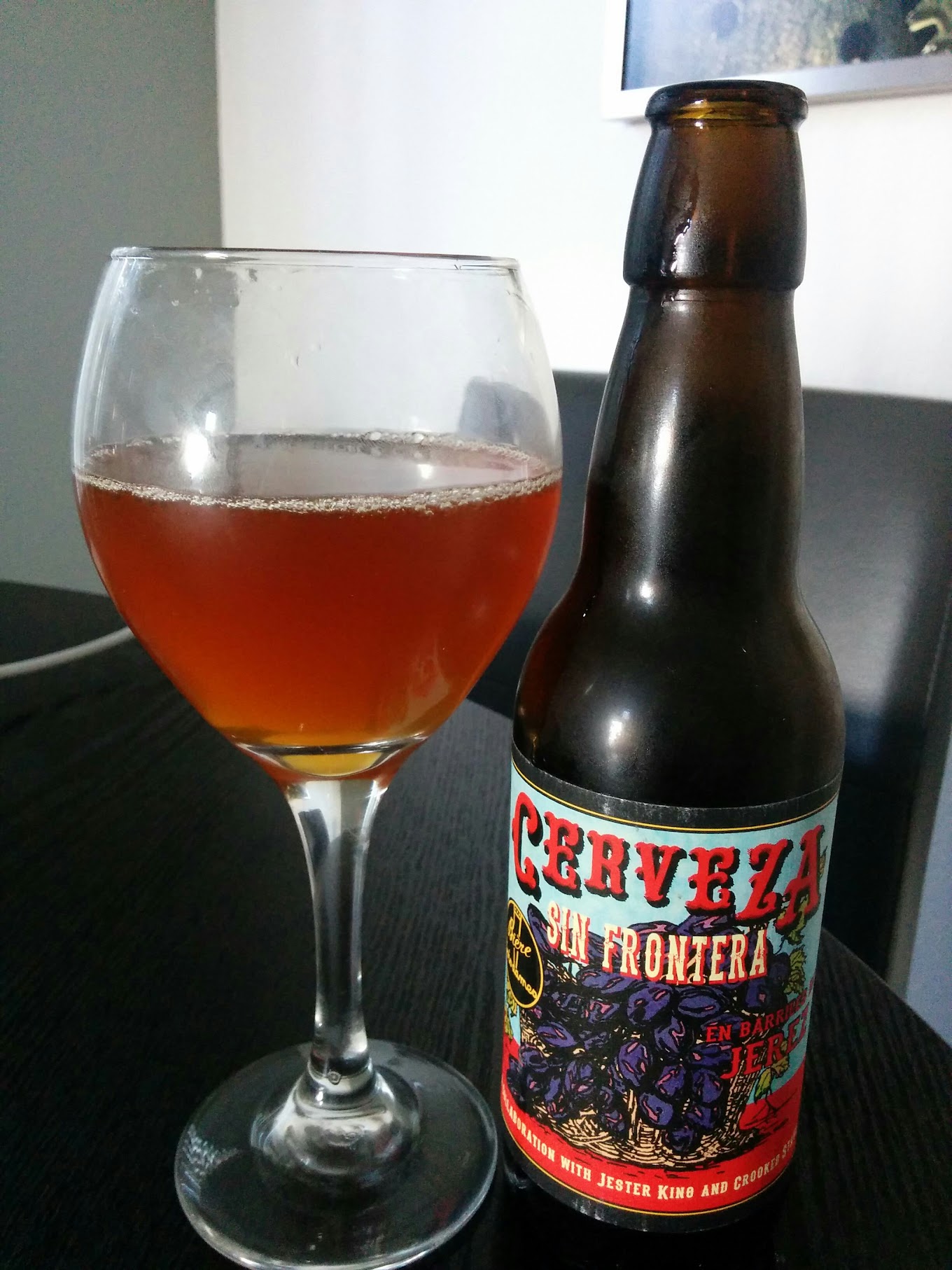 Pours a mild amber-honey colour, with a very minimal, undercarbonated head, that defies promotion. As a result it looks pretty dead and still after just a little while, leaving no lace and no carbonation. That's a bad sign, unfortunately, and this beer certainly does not looks very good.

But we're on the up. Nose is pleasantly striking, with sharp, lambic-like notes of acidity and greenness. There's notes of pithy bitter lemon, tomato leaf, and a strange floral note that actually suggests some sweetness. It's nice stuff.

Taste is also fairly decent, and there is indeed a sweetness that softens—some might say blunts—the acidity. Pleasing wild notes give some crispness, a little crushed vegetation and lemon soda water. But there's not a lot of bite and acid on the back—we get a slight sherbet or ice note of tightness, but certainly nothing very astringent. It actually works rather well, although you feel like it's a flaw stylistically.

Overall, it's an interesting brew. I actually think it's more drinkable for its stylistic weaknesses, and the simplicity that comes through on the palate makes it feel a little more approachable. But I guess I don't drink wild ales for their drinkability and their approachability. I would really like to see more subtlety and complexity in a beer like this.
appearance: 2.0 | aroma: 3.75 | taste: 3.75 | feel: 3.5 | drinkability: 3.75
Rivale
4.8% Irish Red Ale from Brasserie Trois Dames
Overall:
50 / 100
(OK)

33cl brown bottle purchased from Drinks of the World, Zürich. This is apparently "inspired" by Irish beers, and thus the mystery of exactly what "Ale Rousse" this is is solved.

Pours a brownish red hue with decent clarity, even though the colour makes it look rather muddy. Head is a fizzy mess that creased coarse bubbling initially, but then ends up running out of steam, persisting only as a very thin ring of bubbles around the edge of the glass. Despite this, there is some lacing left from the head even as it has disappeared. All up though, it doesn't look great.

Nose is pleasant enough. Slightly nutty and grainy, but muted throughout. There a vague, thin maltiness running through it, with a suggestion of watered-down scotch. Not much in the way of hop presence—there's perhaps a very slight noble character, but the malt is the main deal here. It is indeed a little weak overall, but there's pleasant things to it.

Taste is pretty similar. Thin maltiness running through the body, with a mild nutty toast character that gives it a bit of interest. There is just a touch of metallic hops towards the back, somewhat complemented by a bit of roasted grain character. The main problem is that it really lacks smoothness—the feel is woefully thin, and it makes the taste seem thin as well.

Overall, it's fine to drink, but I guess I'm just underwhelmed. It's certainly something of a miss for me, and it's one of those beers that just takes a fine style and makes a pale shadow of a copy of it. That makes it feel a little pointless on top of everything else.
appearance: 2.75 | aroma: 3.25 | taste: 3.0 | feel: 1.75 | drinkability: 3.5
India Pale Ale
6.3% American IPA from Brasserie Trois Dames
Overall:
63 / 100
(Solid)
Purchased at Drinks of the World in ZÃ¼rich, at the recommendation of @headlessclown.

Pours a rather light yellow colour, with a fine, but pocked head of white. Body looks very light. Minimal lacing. It's a bit lacklustre, but fits the style well enough.

Nose is very sweet, with paw-paw the most dominant character, almost steamrolling everything else. It's an organic, tropical sweetness, but I'd love a bit of acidity or sharpness to cut through it. When swirled vigorously, it gives a slight greenness and a whiff of marzipan, but then settles down to that paw-paw sweetness again. Alright, interesting in its way.

Taste is a little better, because the hoppiness comes through more strongly, giving a pleasant bitterness through the centre of the palate. The lack of body is noticeable here though, meaning the hop characters dominate too much, along with a back palate of bitter almond (did someone slip cyanide into my beer?).

Eh. It's not a bad beer, but it's a sub-par IPA. Doesn't have the flavour or the balance of the best examples.

Purchased from Drinks of the World in ZÃ¼rich at the recommendation of @headlessclown.

Pours rather hazed, but not particularly cloudyâa very very pale white-yellow colour, with a gauzy head of white bubbles. Lacing crystallises on the outside of the glass, staying rather persistently where it touches, but in a rather half-hearted manner. Not a bad look, but I'd like a bigger and more billowy head.

Nose is mild, but clean, with traditional Belgian witbier characters of spice and citrus. Where this falls down is with a touch too much acidity and a touch too much noticeable grain. It gives it almost a whiff of the pilsener to it, and it detracts from the smooth spice.

Ooh, and the palate very truly suffers from the excessive grain. Here, the pilsener character comes through, not only with a husky character, but also with a rather surprisingly robust hop character. To be honest, the hop character, while it doesn't fit in the style at all, mixes rather pleasantly with the citrus flavours to give a bite that is not unpleasant. It's an unusual choice, but it works. Still, a shame about that grain.

It's surprisingly tasty once you wrap your head around it. Call it a "biÃ¨re blanche avec houblon", if you will, and drink it for what it is.