Smells pepperminty, refreshing. Notes of chestnut as well and caramel. Generally quite herbal, but a good beer balance to it.

Chestnutty malt on the palate as well, upfront at least. Develops big peppermint notes early-mid that continues to the back to leave it feeling fresh and clean. It's quite a sweet mint, too, so it's not piquant. Maybe some boozey flavours on the back but it finishes just too clean to really notice them.

Decent body, nice texture as it goes down. 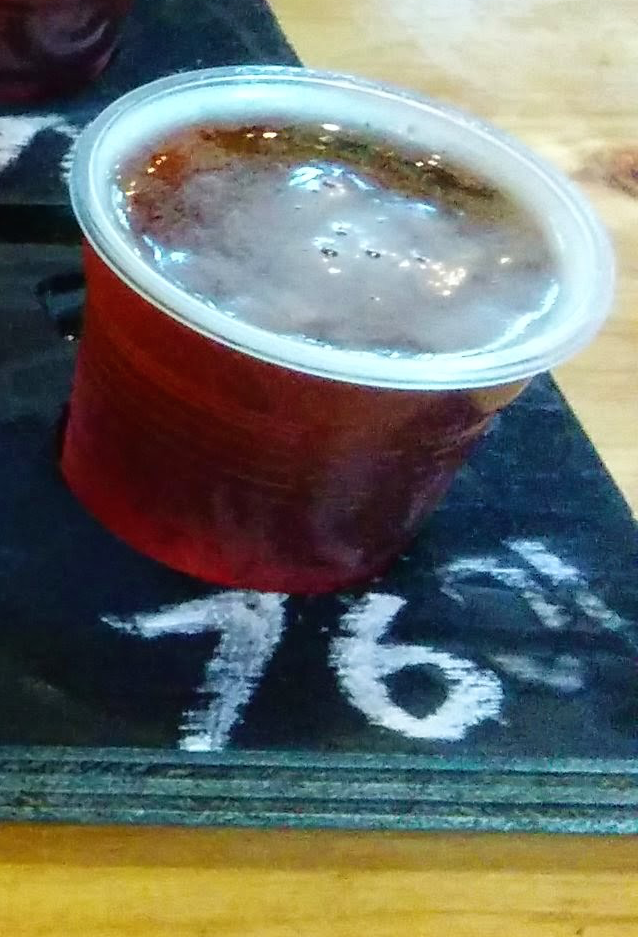 Pours an orange-amber hue, quite clear in the glass and with a lot of heft to the body. Carbonation is fine and powdery when tilted. Head is just off-white, forming a full, fine ring and leaving some patches of lace. Looks very good.

Nose has apricot and a bit of wood to it. The hops otherwise turn a bit grassy, giving the wood a light cedar tone. Otherwise the hop character is green and a little generic. Sweetness gives a suggestion of coconut from the oak as well. It's pretty nice.

Light, fragrant and hoppy on the front-palate, before the oak and booze characters start to drive through the centre of the palate. Lots of barrel wood, and some coconut from the oak, and a lovely long linger that lets the booze express itself, leaving perhaps a hint of kirsch in the aftertaste. It's nice stuff.

Feel is full and thick.

Noticeable alcohol on the feel but not sharp - body is thick which helps to pad it. 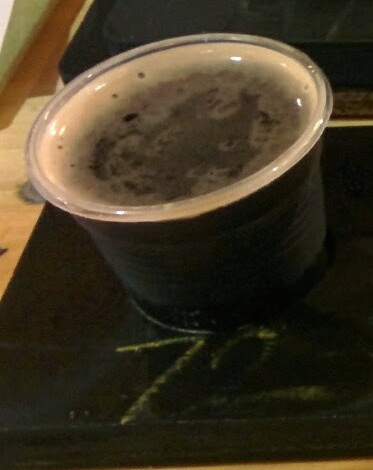 Somewhere between Belgian IPA, Rye IPA and India Black Ale falls this beer, an IBA brewed with rye and fermented with a Belgian ale yeast. Tried on-tap at GABS 2014 in Melbourne.

Pours a dark brown colour, golden at the corners with some mild hazing through the body. Solid weight behind it, that allows some fine static carbonation when tilted. Head is a creamy beige that settles firm and fine, leaving solid lacing. Looks very nice.

Nose is great. Toasty overtones, with solid, fragrant hops behind it. A little jammy sweetness comes through as well very nicely. The roast and the hop characters work together really well.

Clean on the front palate with a firm, malty basis. This is smooth throughout and lays down a foundation for the other characters. Some organic bitterness comes through on the mid palate, while some tannins come through towards the back. Clear aftertaste with a light linger of high-cocoa chocolate. Feel is very smooth.

It's really very nice all up. Overall, it perhaps doesn't quite match its promise, but it's a really very solid IBA in any case, and there's a lot to enjoy in it.
appearance: 4.25 | aroma: 4.25 | taste: 4.0 | feel: 3.75 | drinkability: 3.75
The Amuse-ing Monk Kim Chi Saison
6.6% Saison from The Monk Brewery & Kitchen
Overall:
3 / 100
(Bottom of the Barrel)
This was a collaboration between The Monk and Restaurant Amuse in Perth, brewed for and served at the Beer Mimics Food event at Sydney Craft Beer Week. This was a somewhat ill-advised Kim Chi saison, Kim Chi being a Korean dish of fermented cabbage in a spicy chilli paste.

Pours a burnt yellow colour, solidly hazed but light in the body. Head is a bubbly ring of white that stays rather thin across the top of the glass. Looks okay, no better though.

Taste is just as bad. Fermented garbage water, slightly salty, more of that pongy off cabbage. There's a bit of spiciness on the back, but you can't bear waiting for it to arrive though. Aftertaste is raw and foul.

I don't care. I want not to put it in my mouth any more. This was a big, misguided failure as far as I was concerned. No beer should taste like this. Kim Chi doesn't taste like this. This was quite seriously undrinkable. A woefully awry experiment.
appearance: 3.0 | aroma: 1.0 | taste: 1.0 | feel: 1.0 | drinkability: 1.0
Cacao Cubana (Eagle Bay Brewing Collaboration)
5.5% Hefeweizen from The Monk Brewery & Kitchen
Overall:
50 / 100
(Not Great)
Collaboration with Eagle Bay Brewing, a 'choc-brown hefeweizen' brewed for GABS 2013. Tried at the festival on tap.

Pours a brownish-amber colour, massive cloud throughout the body. Head is cream-coloured, large bubbles. Not bad.

Smells spicy. Touch of sourdough and rye bread from the grain with a whiff of banana, pepper, cinnamon. The right characters but kind of a blah blend. Maybe use some more sweetness or more piquancy from the spice. Treads a bland middle line.

Taste is grainy upfront with more of that sourdough character, but sweeter with a touch of caramel and some dry cocoa powder. Clove towards the back, very dry though and lacking the oomph I kind of want from a hefeweizen, even a cacao-infused one. Not bad but not great.

Body is quite thin, considering how much haze there is. Carbonation shows through more than I'd like.

Sweet nose, hints of pie spice - cinnamon, nutmeg and some dry malt notes. Not bad at all, maybe a touch sweeter than a pumpkin ale.

Malty and spicy palate, but a little thinner and maybe tasting a bit watered-down. Sweet spice seems to be swimming about a bit in a palate that needs more substance. Still nice anise, cinnamon notes. Pretty decent but quite obviously thin.

Not a bad texture, albeit a bit thin and watery.

Decent brew overall; certainly a noble effort at an unusual concept. Sweet potato as a substitute in some pumpkin brews could be way too sweet for me, but the porter balances it out quite nicely.
appearance: 3.5 | aroma: 4.0 | taste: 3.5 | feel: 3.5 | drinkability: 3.5
Sweet Potato Porter
5.8% Pumpkin Ale from The Monk Brewery & Kitchen
Overall:
64 / 100
(Solid)
Had on-tap at the GABS festival in Melbourne.

Spicy and sweet on the nose, with cinnamon giving the spice, and bourbon vanilla providing a smooth sweetness. Slight hint of vegetation, but nothing approaching sweet potato proper. Not bad though, nice aromas.

Slight light fruity pumpkin or sweet potato on the front palate, with a spicy middle section that leads to a nice roasted character on the back. It's all very mild, and feels a little thin (the feel is far too light for what it is, and needs much more weight), but it's pleasant enough all up.

Had on-tap at the Monk on a recent trip to Perth. I loved the location, sitting out in the open, next to the street in Fremantle on the big wooden bench-style tables. Gorgeous evening.

Had this one to match with my steak.

Grainy, rugged and smoky on the nose, but with a slight sweetness which is a little overblown. I like the smoke character, but I feel like it needed a bit more support.

Taste is smooth, but the sweetness comes in here again. Some smoky flavours, but the main event is a buttery sweetness. Finish is dry and chalky, which would be a fine finale, but it comes a little too late, after the sweetness has won the day.

Too sweet, and not enough raw smoky power. It's drinkable enough, but not overly enjoyable. It felt a little thin and pedestrian after a while. Worth trying, but I wish I had have picked another from their roster to try.