Bottle served to me on Christmas Day 2017 by Jez, blind.

Pours a dark brown colour, with a slight red tinge at the edge. Head is beige, thin but some nice cascading when tilted. Dense rim of foam around the edge of the glass. Lacing is nice and sticky. Pretty nice.

Smells rich and boozey. Dark robust roast with a big bourbony oak coconut character as well. Slightly nutty, slightly boozey. Touch of some vinous notes as well that are mildly tart. Fairly standard for this style, and possibly a bit too subtle for what's obviously a pretty big beer. But pleasant for sure.

Taste is also quite subtle, but not in a meagre or weak way but rather very mellow. Has a big chocolatey character up fron that gets some big rich gooey fondanty type notes, then some rich booze with bourbony vanilla and coconut, that does dry up a bit late-mid and goes slightly ethanoic. It's a bit of a duff note really, not because it's strong but because the remainder of the palate complexity is a little thin towards the back. Decent coconut flavour, decent chocolate character but a bit of a gap late-mid which could use some beefing up; some roasty bitterness or smoke could work very well as it's really just raw booze. 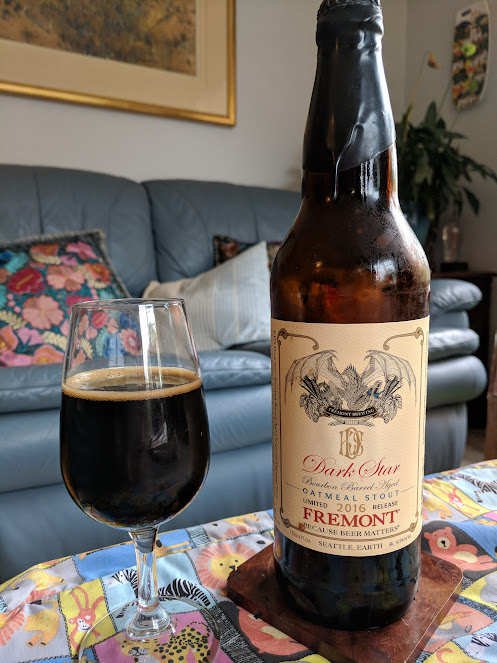 Pours a lovely silky black-brown colour, with a kind of glistening slickness to the body. Head is a deep brown, forming a very fine crema-like ring. Nice specks of lacing. Carbonation is powdery, and falls away in cascading flurries. Looks great.

Nose is very pleasant, with a lovely coconut and dark chocolate character. It's beautiful and toasty, but with luscious hints of cherry fruit and dark raspberry. Dark liqueur notes come through as it warms. It's really quite lovely.

Taste is actually even better. There's such slickness on the palate, which accentuates the sweetness, while the flavour manages to develop independently. There's lovely burnt toffee notes, more coconut, dark chocolate and raspberry, and a kind of fragile coffee character wafting over the top.

Feel is slick, with a hint of heat, but nowhere near what you'd expect from how big it is. 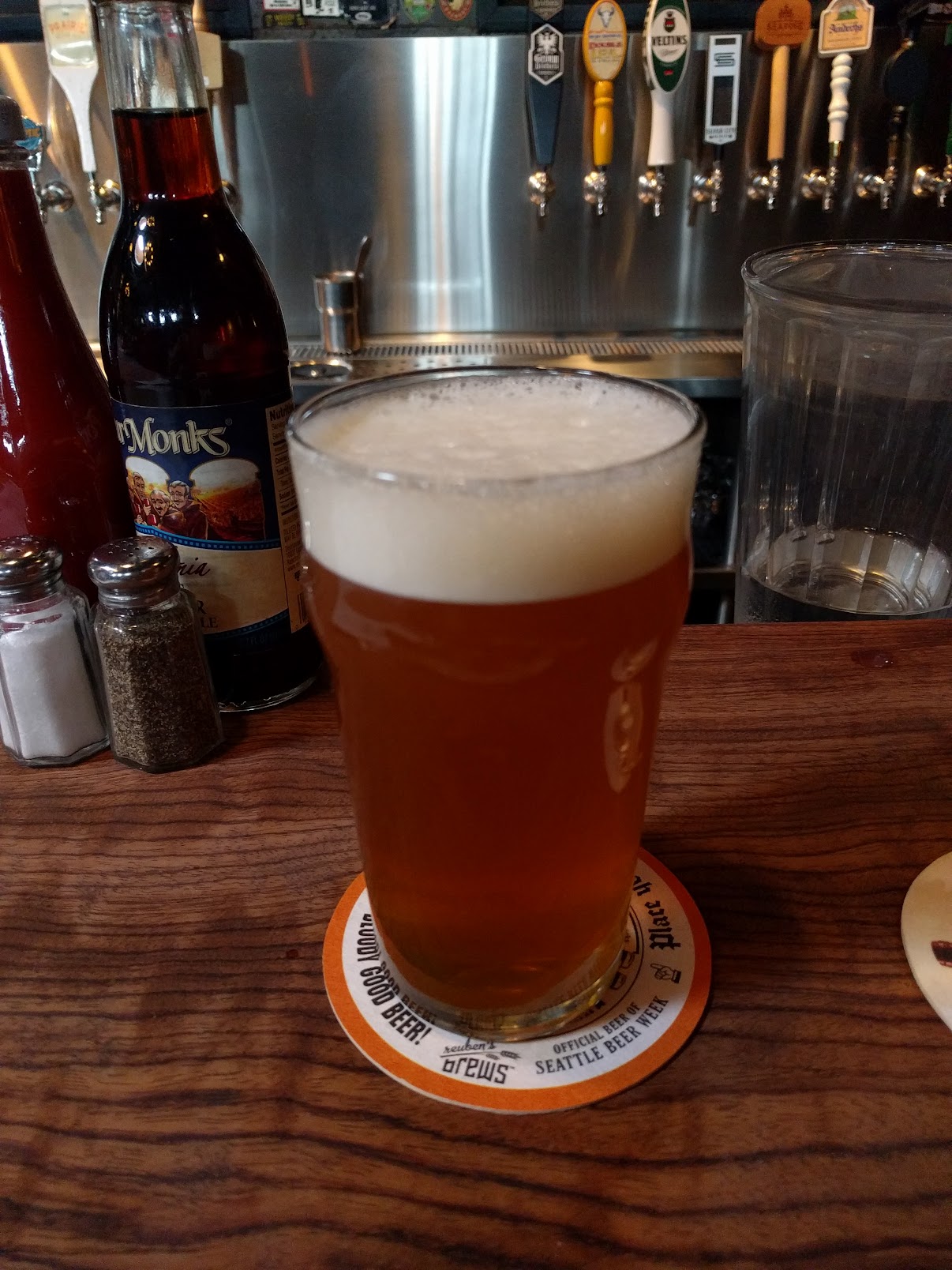 On cask at Brouwer's in Seattle.

Pours a pleasantly hazed, deep golden colour, with a persistent, loose but frothy head of yest yellow tinged off-white. Lacing is clumpy, as is common for a cask ale. Carbonation is very fine, and very slow moving, despite having a pretty light looking body. Good look overall.

Nose is great. Big, juicy bright and flavoursome fruit characters; tropical but sharp. As it warms up, it gets a distinct herbal note as well, light freshly chopped flat-leaf parsley. It adds a nice note to the aroma, and makes it stand apart. Malt characters are minimal, but the do appear, slightly flat and rubbery, in the back. It's a good nose all up though.

Taste is similar, although the cask makes it so smooth that there's almost no bitterness to it. There's certainly no harshness, anyway. Instead, there are sweet herbs, rounded stone fruit characters and a sweet stewed orange note. Back is really smooth, suggesting caramel or vanilla ice cream—it really removes much or most of the bitterness, which ends up weirdly making it less refreshing and drinkable. It almost gets a bit cloying after a while. 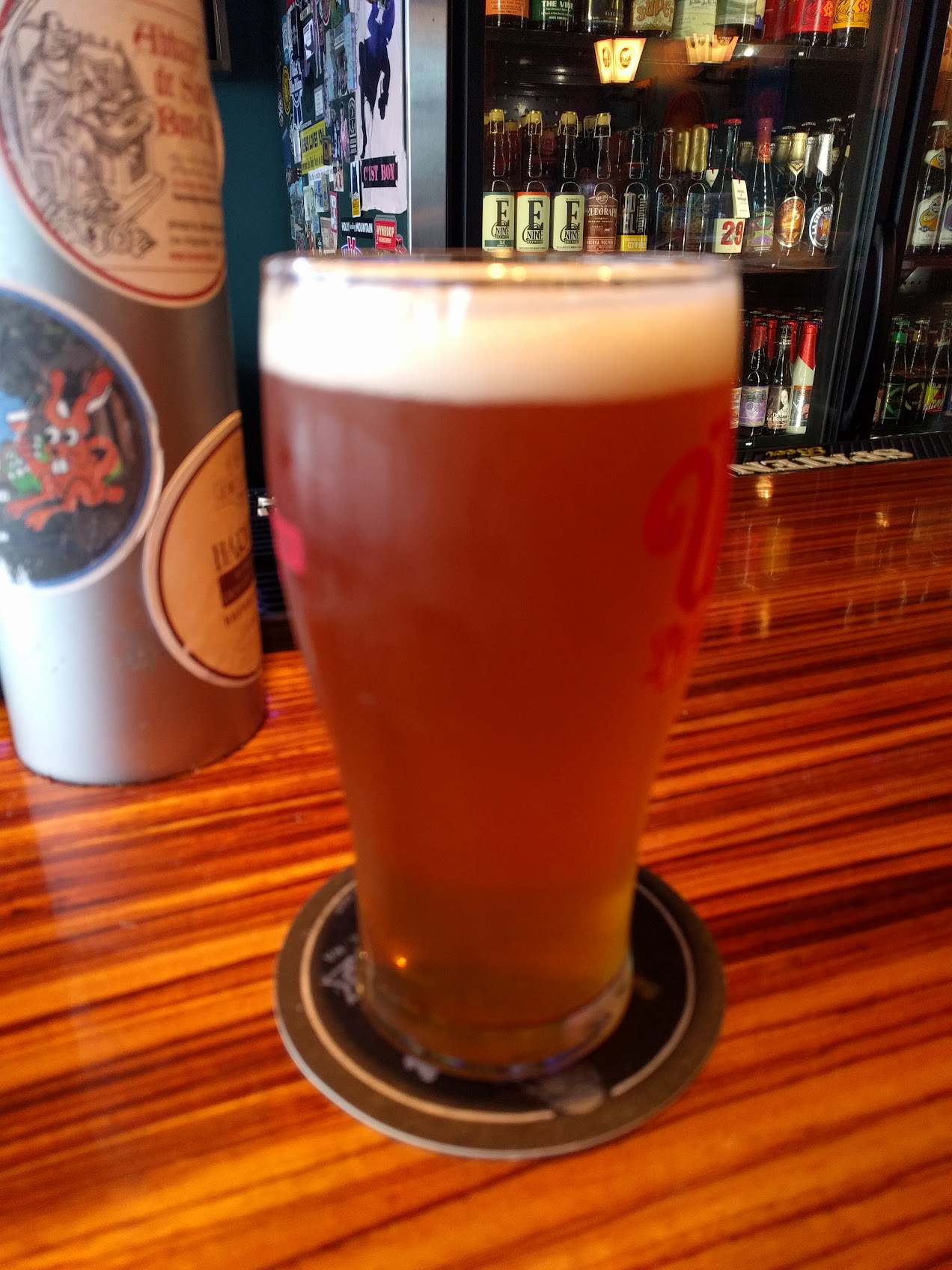 Nose is great. It's Simcoe, bright and astringent with catty notes and a sharp organic character like freshly cut weed. It's that nice combination of bright and dark. Absolutely exemplifies what it should.

Taste is also very good. There's a lightness to the palate which steps away almost to the limits of what it should do. This lets the hops shine through. On the palate, Simcoe turns slightly savoury, like spicy Thai herbs, with metallic, coppery overtones. There's support from the malt, but no more, it doesn't come through in the flavour at all.

Feel is light. It works well enough. If they could get the body and texture up a bit without the malt it would probably be exceptional. 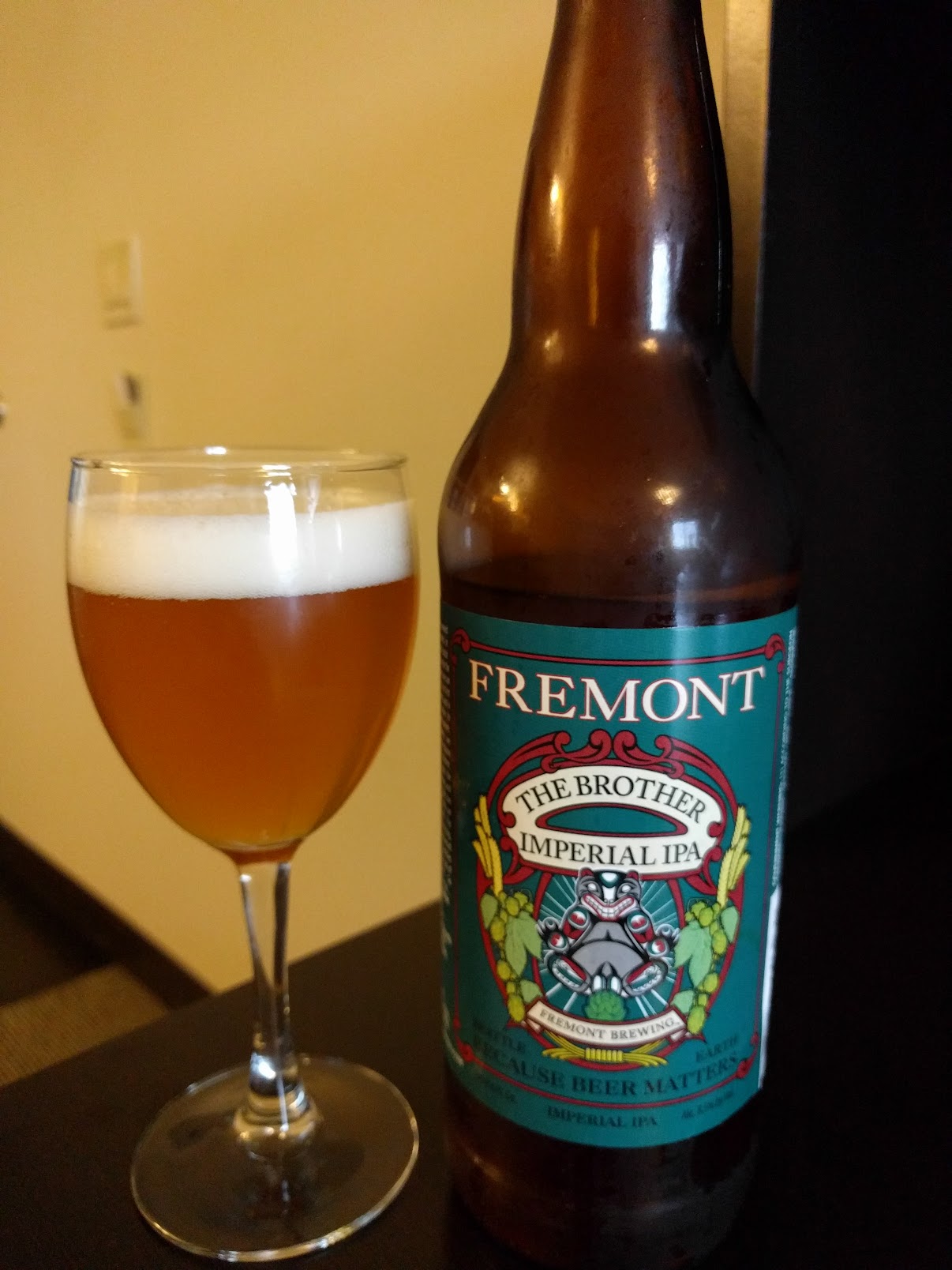 Pours a pleasantly light gold colour, with a surprisingly light and fluid body as well, that suggests a much lower ABV beer. Head is a nice fine crest that separates into larger bubbles, but leaves exceptional lacing on its way down. Carbonation is quite fine, but very swift, almost disappearing before you get a chance to see it when the glass is tilted.

Nose is quite bright on opening, with a fresh citrus tone immediately apparent. As it gets a bit warmer, it turns more resiny, with green, crushed vegetation tones coming through, almost like the character you get when you overdo the hopping. Indeed, after that initial burst it just starts smelling like Generic Hops, losing a lot of the individual characters that would make it interesting.

There's a similar phenomenon going on with the palate as well. Here, we get a fairly brutal hop bitterness that sits hot and resiny on the tongue. Under it is a surprisingly bold malt presence, but it has almost no caramel element to it, meaning it tastes a little bit like raw barley sugar, and doesn't quite gel well with the bitterness. Later, towards the finish, there's some greener, herbal characters, giving notes of rosemary and stir-fried Thai basil.

Feel is surprisingly light, this partially explains why the bitterness is so forward.

Overall, this is okay. But only okay, and that is itself a disappointment. It feels unbalanced, overhopped without regard for the purpose of the hopping or the combination of flavours. It's a shame, because this should be a stellar brew.
appearance: 4.25 | aroma: 3.75 | taste: 3.5 | feel: 3.5 | drinkability: 3.5
Summer Ale
5.2% American Pale Ale from Fremont Brewing Company
Overall:
83 / 100
(Exceptional)
Had on-tap at Alibi Room in Seattle.

"Not bad" is as bad as it gets, however. Everything is up from here, and quite dramatically. Nose is burstingly bright with zesty lemon and curacao zing, giving a sharpness but also a sweet, heady fragrance. Slight pepper comes through as well, adding another layer of bite. Delicious.

This has to be one of the most drinkable beers I've ever had. Such a good summer beer: I feel as though Australia, with our significant more summery summers, would really benefit from seeing this. It's just so clean, so refreshing and so drinkable. Awesome stuff.