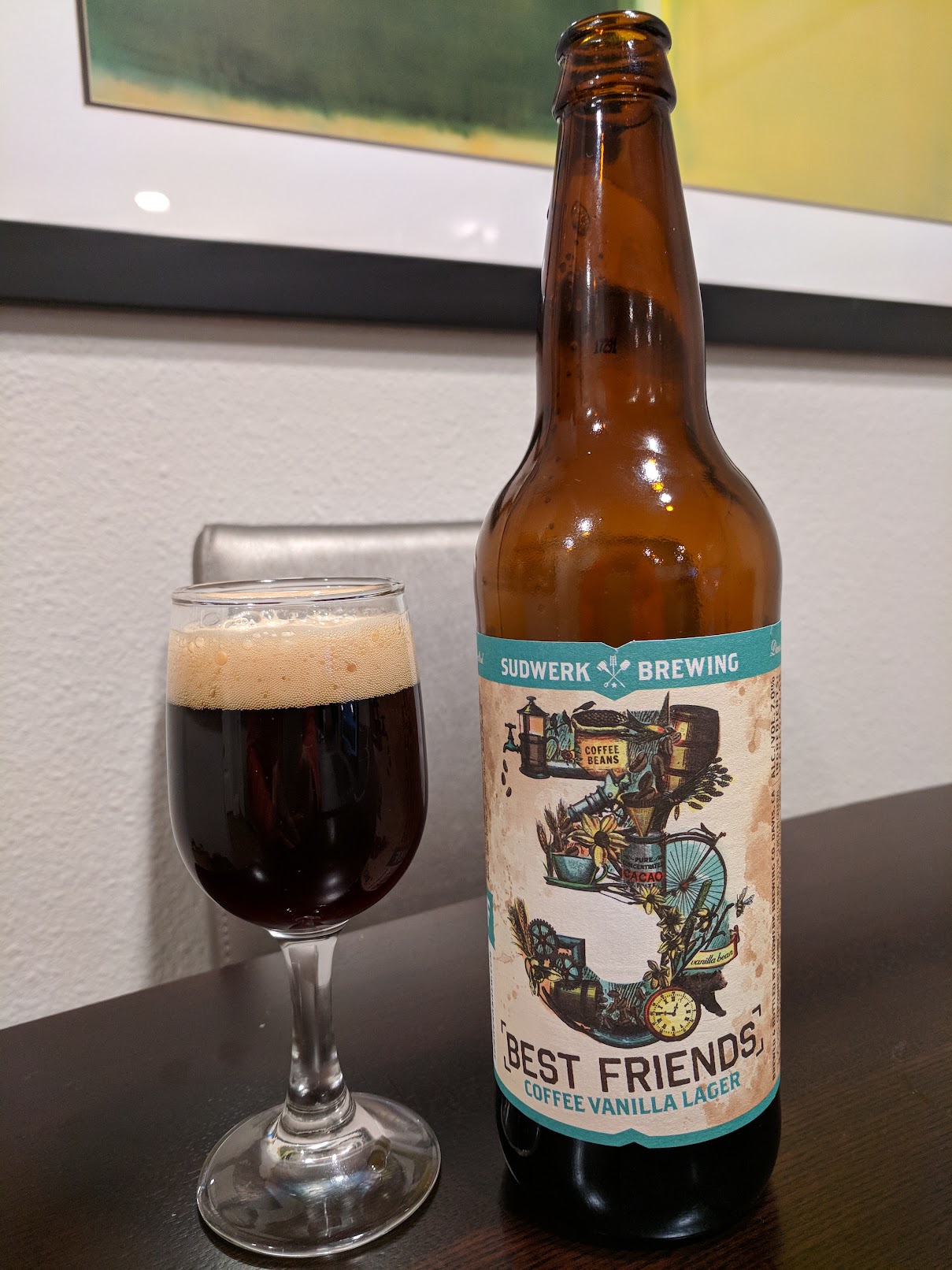 Pours a pleasant deep brown colour, with a fine beige head made of very small bubbles. Carbonation is very refined, and moves languidly in the glass. Lacing forms in tiny specks. There's something just very appealing about it. I appreciate that.

Nose is quite pleasant, while also being quite simple. It's based around coffee, with slightly old roasted beans being the dominant character. There's a faint hint of grassiness to it as well, which adds some relatively pleasant organic notes. It has overtones of capsicum and fresh chilli to it as well from the coffee. All up, it's pretty nice.

Taste is much more towards the vanilla, certainly in the front of the palate—but that's both a benefit and a curse. The vanilla also adds a creamy quality to the mix, which doesn't mesh very well with the lighter lager body. It's neither one thing nor the other. The coffe comes in late, with a pleasant biting, fragrant kick on the back. This, at least, works very nicely with the lager yeast, which abbreviates the ending of the beer.

Overall, I like it—the vanilla and coffee are nicely done, and both are very present in one form or another. I'm not really opposed to it being a lager either (breweries should be brewing more lagers!) but I think that these particular characters do clash a bit with some of the fundamental aspects of the beer. Still. I like it a lot—I just feel as though there are a couple of things that could be done to make this really quite spectacular.
appearance: 4.25 | aroma: 4.0 | taste: 4.0 | feel: 3.5 | drinkability: 4.0
Cascaderade
6.6% India Pale Lager from Sudwerk Restaurant and Brewery
Overall:
72 / 100
(Very Good) 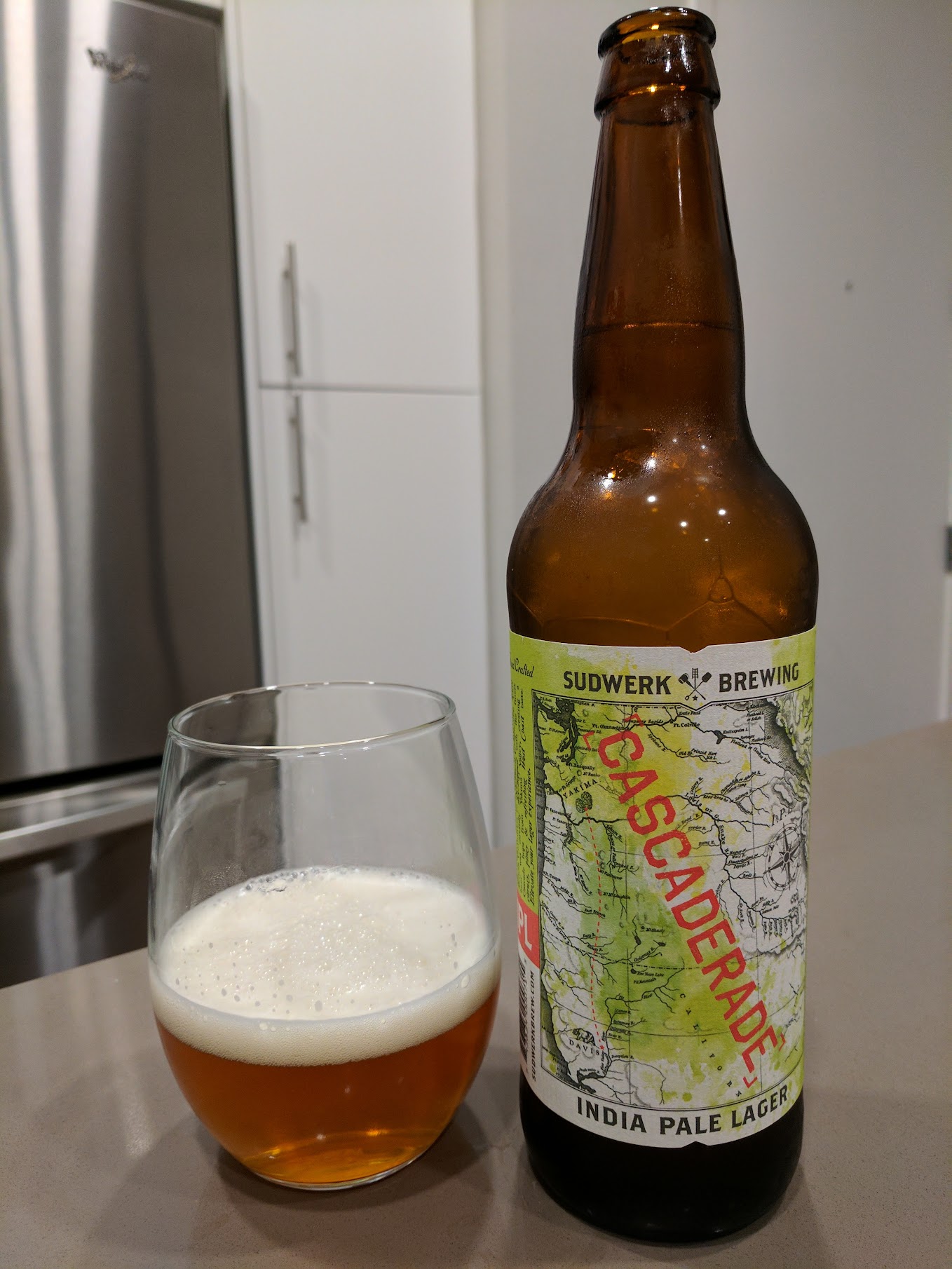 Nose is generically pleasant: there's a sweet hop character, with hints of lemon, and a fragrant weak tea note. Under this, or when the right aromatics are triggered, there's notes of black cracked pepper and eucalyptus. There's also malt, giving a caramel/toffee sweetness. It all works rather well.

Taste is also pretty solid. There's a clean hop fragrance, turning slightly sweet with turns of lemon and sweet citrus. The malt is a little bit too bold to my mind, and it has a crystal/caramel character which drags it down where it should be light and fragrant. But it finishes light enough, with a thin body in the back, which allows some ephemeral hop characters to have the last word.

Feel is a bit thicker than I'd expect for a lager. at 6.6% it's a bigger beer anyway, but I'd like more crispness throughout, rather than just at the front. 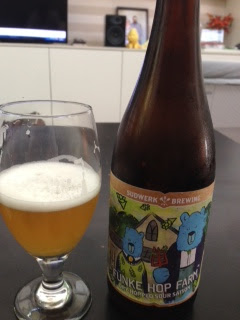 Smells like getting dropped into a vat of ripe passionfruits. It's not one-track but that is very dominant. Notes of rose petals and lychee, guava developing as well. Touch sweet, very tangy and very delicious.

Taste is very fruity and oddly complex. Odd kind of palate construction. Has tanginess upfront then gets sweet midway with big lychee character before finish is tangy, with more of that passionfruit, touch of citrus as well that's really quite tart and almost gives a finish like a sour beer but there's not a lot of pull, and there's a lightness on the finish that is a bit soft drink-reminiscent. Faintest touch of amaretto on the very back as well. Tart, refreshing, sweet at times; don't really know how to compartmentalise this beer except under the header "very tasty".

A bit of body; and a bit of pull that then doesn't carry on to the back and confuses me slightly. Still, pretty good.

This is actually a hell of a beer. Blind tasting, it's got me completely bamboozled as it doesn't really conform enough to one style but gives off huge idiosyncratic fruit flavours and plenty of fun. Suffice to say, it's well worth a drink.
appearance: 3.75 | aroma: 4.5 | taste: 4.25 | feel: 3.75 | drinkability: 4.5
Fünke Hop Farm
6.5% Saison from Sudwerk Restaurant and Brewery
Overall:
90 / 100
(Superb) 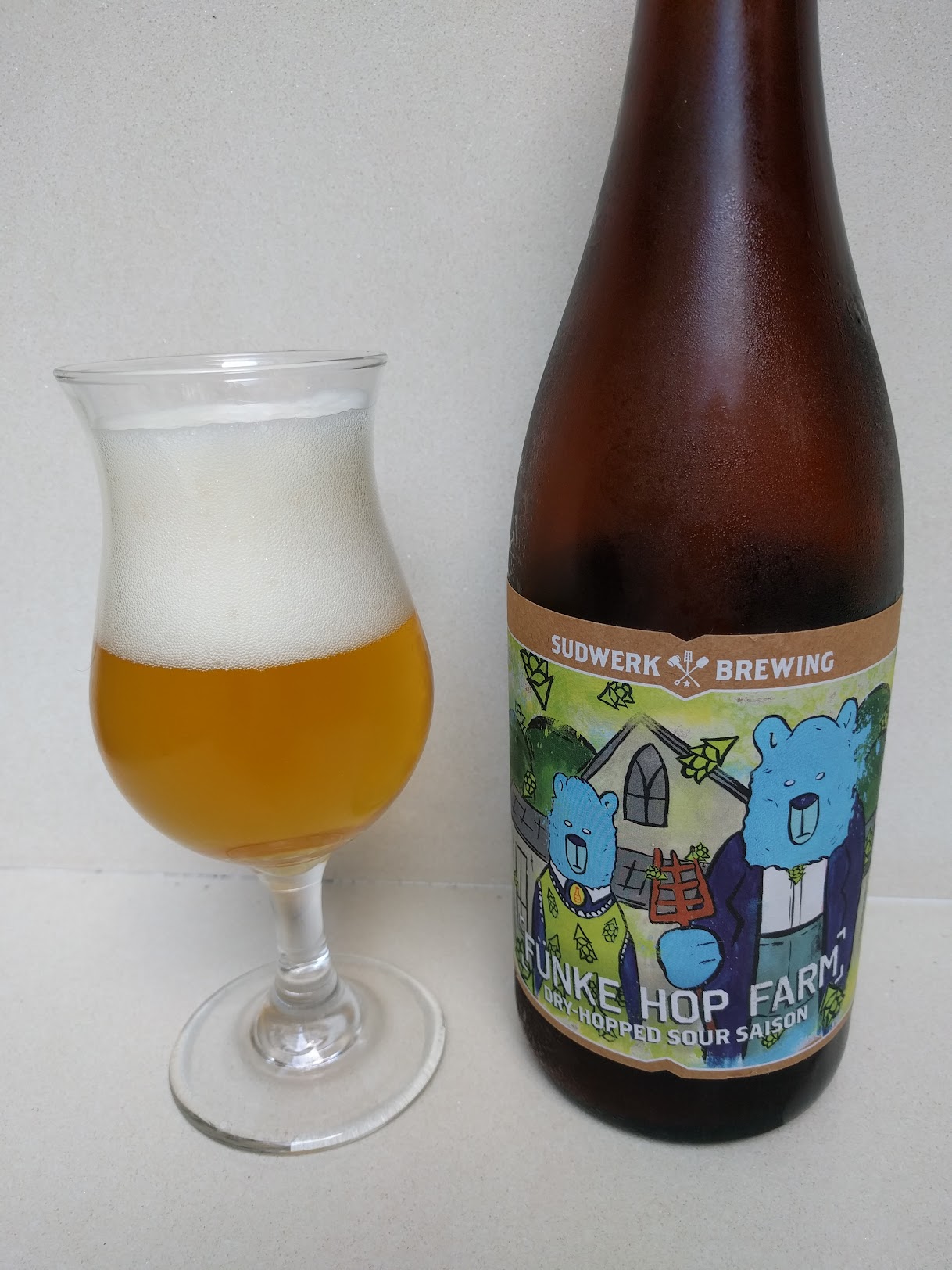 750ml brown bottle purchased from Healthy Spirits in San Francisco. Shared with Sam back in Sydney.

Pours a good clear golden hue, with a coarse-bubbled, frothy white head that leaves streaks of lace. Body is fairly light, but the carbonation is fine and tight. Looks pretty good all up.

Smell is phenomenal. Amazingly bright, fresh hop characters giving kiwi, passionfruit and carambola, mingled with some peppery spice from the saison and even a slight twist of funk. It's all very clean, but pungent and punchy from all the aromatics. I love it.

Taste is also superb. And here it comes in unexpected ways. There's a slight funk and tartness to it, but this melds beautifully with the characters of fruity hops, giving guava and passionfruit notes, a bite of acid towards the back, and a clean finish with a linger of sauvignon blanc. It's refreshing as anything as well, and beautifully complex despite this.

Feel is light, a little frothy from carbonation. It's not the beer's best aspect, but it certainly does it no harm.

Overall, this is stunning. It's super refreshing and drinkable, but with mountains of complexity and a beautifully constructed aroma. This is top-notch stuff—highly, highly recommended.
appearance: 4.0 | aroma: 4.75 | taste: 4.75 | feel: 4.0 | drinkability: 4.5
Rye of the Lager
7.0% Rye Beer from Sudwerk Restaurant and Brewery
Overall:
65 / 100
(Solid) 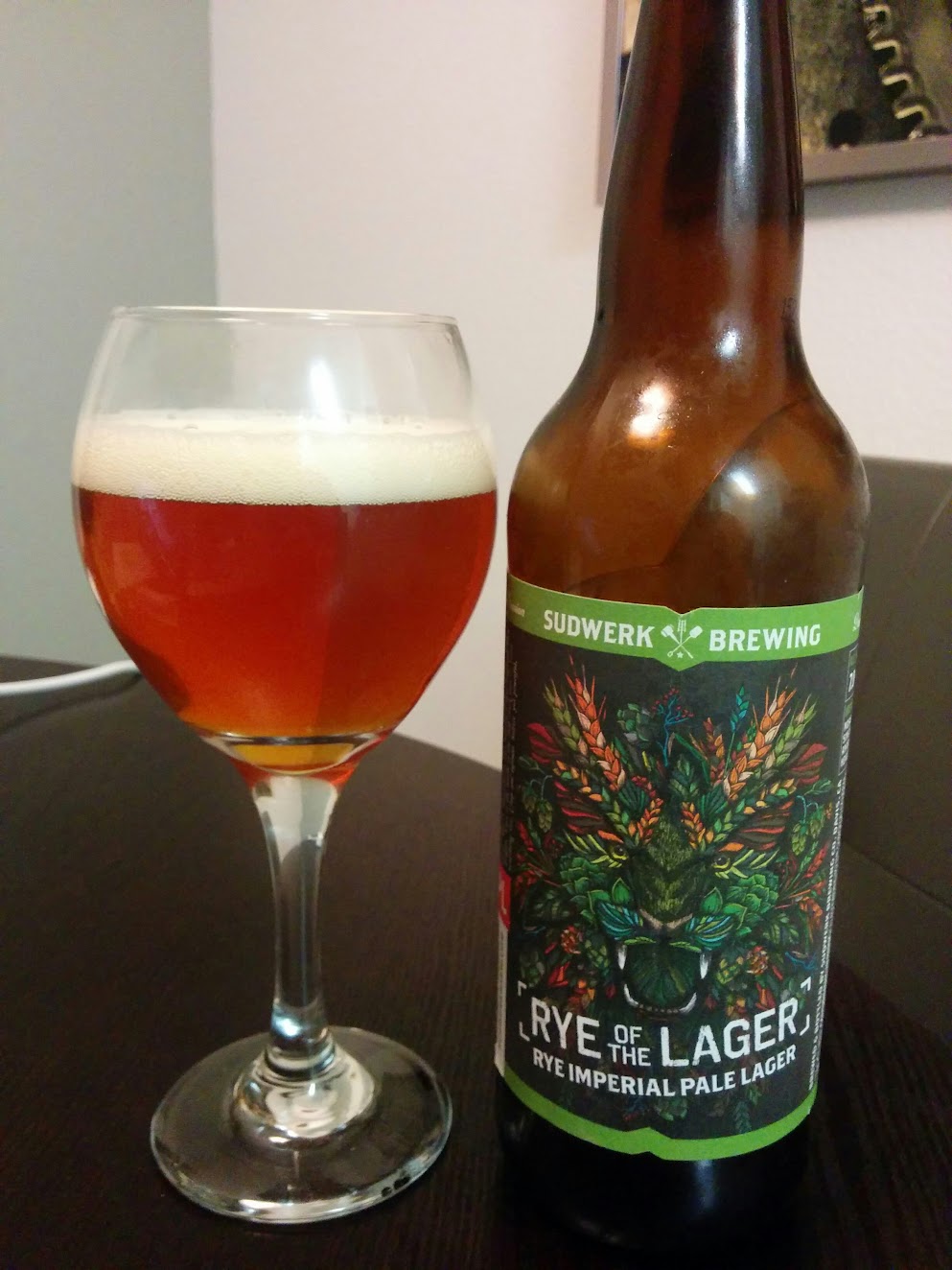 Pours a burnished copper colour, with tinges of red to the body. Head is a firm, pleasant, mottled crest of almost-white, the leaves great lacing. Body is really quite solid and thick, and holds languid carbonation. Looks good.

Nose is disappointingly mild. Thin, slightly woody character comes through, with some fairly dull grainy malt characters. Slight grassy edge is noticeable as well. But to be honest, there's not a great deal of any of it. As it warms, there's a slight spicy note, but again it's subtle.

Taste is a little more pleasant. It's quite full-bodied, which does it favours in the flavour department, although it does mean it loses a little bit of classic lager crispness (although at 7%, we were likely never going to get exactly that). Front palate has touches of dry leafy notes, with a touch of something herbal or medicinal. There's some evanescent sweeter notes in the mid, maybe giving a touch of strawberry, oddly enough, although the back has a more pronounced bitterness, and a touch of biting crispness (yes, it is there) that cleans any semblance of that.

Feel is indeed, pretty full. There's a lightness to it to some degree, but it is genuinely heavier than even other lagers I've had at this strength. I'm not quite sure what's causing it—there's not enough malt sweetness left to suggest it's underattenuated.

Overall, though, it's decent enough. It's not as exciting as I wanted it to be, and it just feels dull enough that it makes you question why you'd choose this over, well, something else? Anything else? It's just a little bit dull.
appearance: 4.0 | aroma: 3.25 | taste: 3.75 | feel: 3.5 | drinkability: 3.5
Sudwerk Imperial Pilsner
7.0% Imperial Pilsner from Sudwerk Restaurant and Brewery
Overall:
63 / 100
(Solid)

I do love a good pilsener, and an imperial one... well, perhaps not more so, but if they sock me in the mouth with extra pilsener characteristics, I'm not going to complain. Let's see how this one goes.

Pours a very light and very clear golden yellow colour, with an initially frothy head of foam, which settles to a white film on the top, that surprisingly doesn't leave much lacing. Body looks quite light for a 7% brew, but it looks decent enough. Genuinely looks like a pilsener at least.

Nose is a little funky, sweaty with a slight corny twang to it, but it's mollified a little by some decent fresh hop notes which give a slight fruit character. Missing a little sharpness for a pilsener, but not bad.

Taste is light, but pleasant enough. Some sharpness on the front with a slight lemon zest character, before a rather lengthy back palate that is drawn out because of quite a sharp alcohol hit on the back. It's not a bad character, but it's the only sign of the "imperial" in the name, and the other flavours aren't accentuated reciprocally. Feel is extremely light, which is expected, I guess.

It's a reasonably well done pilsener, but not a particularly well done imperial pilsener. The harsh alcohol is too prominent, and is the only thing which delineates this one from its non-imperial brethren. Needs something more, and it doesn't have it.