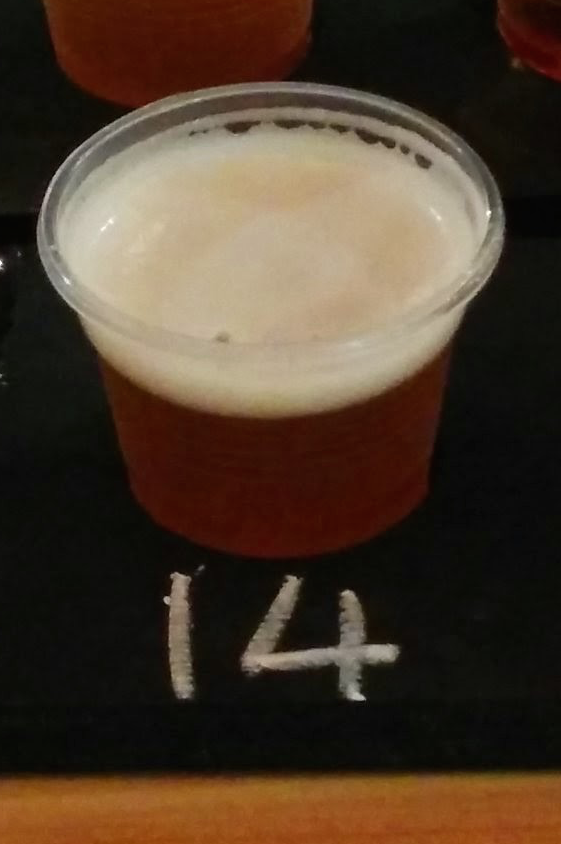 Pours a deep golden colour with some solid hazing and fine carbonation. Body is solid and has some heft to it. Head is a yellow-white colour, forming in a firm ring that leaves thin, sheeting lace. Looks decent enough.

Nose is dusty, with a faint bit of funk to it. Slight oakiness comes through along with the expected apple note. It's not terribly exciting though.

Lightly astringent on entry, with a mild aspirin tone giving it a medicinal quality. Slight appleskin characters in the middle, and the back is tight and very dry. Nothing much in the finish.

Smells a little sweet at first with a touch of vanilla on the malt, then a crisp green apple aroma filters through with a touch of chardonnay. Fairly crisp, but ultimately unimpressive.

Grainy upfront on the nose with a puffed rice edge, then gets buttery oaky mid, with a touch of champagne. Finish develops an apple crispness, with a cider tartness and some more dry wood notes. Ultimately finishes a little sweet, with some astringency late. OK.

Touch of carbonation on the feel; not too bad though.

Smells pretty tasty, too. Nice toffeed malts underlying with a nice hoppy overlay. Slight citrus and balsamic for tang, with a herbal medicine edge to it, kind of dirty but not bad, especially with that fruity lift from the other hops.

Taste is quite malty upfront, although the assault gives slight apple notes from British ale esters. Develops roasty, slightly chocolatey grain notes midway that smooth out nicely towards the finish with a slightly metallic note, but this is largely cleaned up by the bittering hops; slight citrus and a hint of maraschino cherry, before finishing herbal with a bite of ginseng. Nice, malty but ultimately clean and pleasant beer.

Bit too much carbonation for my liking; it just pops too much in the mouth and marring what might otherwise have been pretty smooth as there's a decent body there.

Wasn't expecting much from this beer, but it's really silenced my inner critic. Rich and malty but very satisfying as well. This tasty beer will make a nice complement to me eating my words.
appearance: 4.5 | aroma: 4.0 | taste: 4.0 | feel: 3.0 | drinkability: 4.0
Red Tail
5.1% Extra Special Bitter from Beard & Brau
Overall:
48 / 100
(Not Great)
Something of a hybrid Amber Ale / Scottish Ale through the use of Scottish Ale yeast over what appears to be a relatively hoppy Amber ale. Let's see how it goes.

Nose is slightly organic, giving up a little citrus and a strong aroma of green apple peel. It's a bit like ale-fermented sugar, which is worrisome, and there's ont a huge amount of depth and sweetness to balance it.

Taste is a little better, giving some nutty grain characters, and a chalky residue. Feel is very thin however, as is the breadth of the palate--it feels as though much of it is empty. A very little amount of bitterness on the back is the only hint of the hops. Quite bland.

A disappointing brew. Not something I'd be that keen to try again. It looks alright, but when it comes to the crunch it doesn't have a lot to offer. Really rather bland.

Very pleased to see dgilks classified this as a lager, not an ale. Despite what it says on the label (Pale Ale), surely fermenting it with a lager yeast makes it a lager (QED)?

Whatever it is, it pours a slightly hazed burnished bronzey orange colour, with a frothy and voluminously gushing head of off-white. Minimal lacing, and little body, which probably explains it. Lots of carbonation.

Nose is mildly fruity, with some sulphurous overtones and a husky grain note. What fruit is there is quite crisp and sharp, almost tending to an underripe or vegetative character. Certainly more of a nose I expect on a pils than on a pale ale.

Taste is crisp and clean, with minimal body, and not a huge deal of flavour either. What remains is a slight pilsenery grain note with a slight touch of crisp bitterness on the back that almost grates into the territory of solvent. It's crisp though, and pleasant enough, without having a huge amount of interest.

It's not a bad brew all up. It's drinkable enough, but the thinness on the palate and the crisp grain and residual bitterness in the flavour really belies the ruse that this is a pale ale.

Pours a glowing orange-amber colour, head is off-white and very generous with nice dense puffiness on top but sinking in the middle. Body is quite cloudy, but there are some bubbles on the bottom that dislodge when you tilt the glass. Pretty damn nice.

Smells quite fresh, with a lot of vanilla. Slight fruit tang with some banana and citrus, and at the back is a very phenolic aroma, slightly musty but well-blended with the fruit aromas. Good.

Taste is very bitter and phenolic with lots of funk. Starts out with a bit of a citric note, tangy and fresh, quickly goes very funky-bitter and then grows far more intensely so - cheese rind, aspirin and a bit battery-acid metallic flavour dominating the finish. A big kirsch flavour on the late-mid as well, fair alcoholic flavour but yeah, that metallic character is really powerful and a bit off-putting. Not terrible but leans too heavily on all the less enjoyable saisony characters, and I don't find this very refreshing.

A bit of a sizzle on the feel with reasonable thickness. Not bad, quite smooth.

Yeah, a bit overcooked, this beer. I can imagine this being quite enjoyable for some but I don't really enjoy it a whole lot.