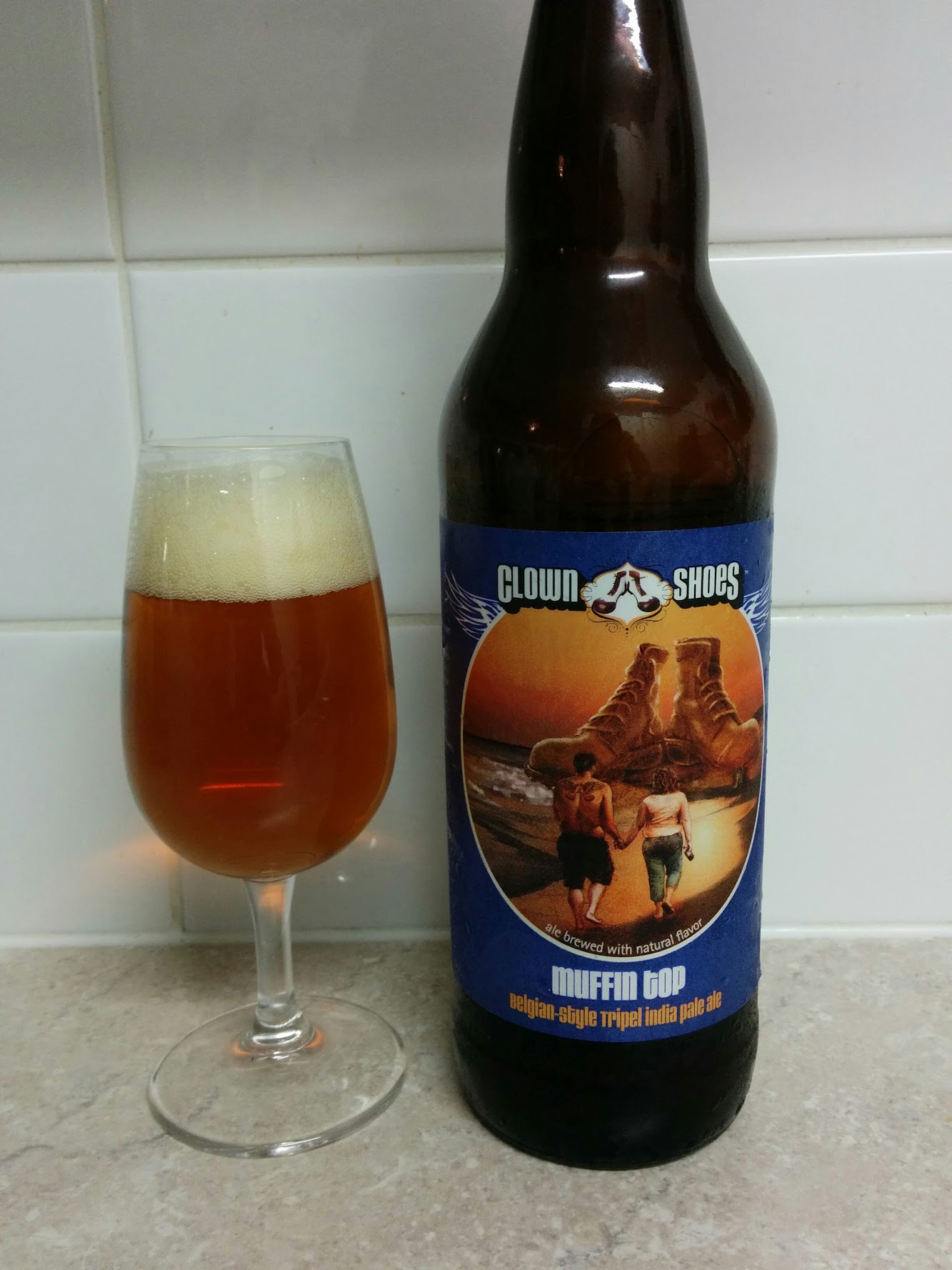 Pours a clear, amber golden colour with a firm body and fine carbonation. Head is a little bit coarse, but settles into a bubbly ring and leaves decent enough lace. Looks OK.

Initial whiff gives plenty of big hoppy notes, but the volatile stuff leaves pretty quickly, leaving a rather dank sherry/oxidised note in its wake. It suggests that the bottle's a bit old. There is a big sweetness to it, and it does have a touch of the estery Belgian notes. It's got the characters in there though, so it's maybe just a bit tired.

Taste is a bit better, with a decent, smooth palate that plays up those big, rounded Belgian notes. The oxidation still takes the corners off though, and although there's some mild bitterness, it's very muted, remaining only really as a mild spiciness. It's pleasant though. As it warms there are some more complexities. Some stewed orange peel and macerated apricots, perhaps. And the more you drink, the more the bitterness builds up, so it starts to feel more appropriate as it goes along. By the end, it seemed pretty good.

Feel is solid and full, but with a slickness that keeps it from being too heavy or cloying.

Metallic gold colour, steady but slow bead. Head is off-white, foamy around the edge with some trails of lace left behind. Looks pretty good, with a good strength to it.

Smells hoppy; fruity and somewhat sweet with a touch of boozey marmalade to it. Yeah, brandy cordial and some tropical/citrus notes. Pretty appealing.

Taste is similar but really quite boozey midway. Maybe some dank hop notes mixing with it. Quite malty upfront, with some orange marmalade notes filling up the early palate, then some citrus notes midway just spike, then finish is mostly boozey and somewhat resinous. Quite bitter, dank. Has a sharp ethanoic character on the very back as well. Not sure what it's missing but there's just a stodginess to it. Maybe some spice as every sweetness is very syrupy and every bitterness is very dank, so it just needs some more piquancy to cut through.

Somewhat thick, quite a nice texture with a bit of heat late.

Smells tangy, quite spicy too to the point of astringency. Some orange notes and a touch of sherbet but doesn't quite have enough tang. Smells quite earthy and somewhat bitter overall.

Taste is much better. Really big clementine character with candied peel and a nice marmalade glaze kind of character upfront, then somewhat tangy midway with a trace of hop bitterness coming through. Citric and slightly grassy. Finishes mostly tangy with a whisper of pepper on the very back.

Smooth, little light on the body but not too much texture which could ruin a nice light beer.

Pours a really dark brown, almost black in the body, but with some clarity and a slight brown colour at the edges. Head is a little bit filmy, but forms a fine ring of beige around the glass. Carbonation is quite fine in the body, but the body overall is surprisingly light. Looks okay though.

Nose is great. Big brown malt body giving roasted, but sweet and slightly nutty aromas, no doubt enhanced by the pecans. There's a slight brown-sugar/crumble character to it as well, which enhances the suggestion of sweet pecan pie. It does a pretty decent job of matching its description, I have to say.

Taste is also very good. Really pleasant nutty notes always mingled with a slightly fragrant sweetness. Front of the palate is light and sweet, but towards the back the porter notes come in more strongly, giving a rather dark roasted character, almost suggesting a bit of char or ash. It's a bit of a downer in a way, because otherwise the beer is right on message.

Pours a hazed deep golden, with a slight amber edge coming through. Head forms a solid mesh of large bubbles and some fine, intricate lacing. Carbonation is fine in the fairly dense but fluid body. Looks pretty good.

Nose is oily with hops, but with a solid sweetness that seems to flatten out the impact of the hops, leaving it slightly fruity but empty. A hint of plastic or plaster comes through as well. It's okay, but doesn't really do anything for me.

Taste is a little better, because it does have a relatively pronounced hop bitterness which gives it an edge and a sharpness. Otherwise, it does still have a little of that flat sweetness again, and some peppery characters on the back. Finish is slightly medicinal, which is preferable to the lingering sweetness through the mid-palate.

Feel is a little heavy, but not to the detriment of everything else.

I think it really needs more hop aroma: I suspect this bottle is not at its peak being on the other side of the world from where it was brewed, and it was probably better when it was fresh. But right now, even within the 1-year-of-bottling date they give, it doesn't really stack up.
appearance: 3.75 | aroma: 3.0 | taste: 3.25 | feel: 3.0 | drinkability: 3.0
Vampire Slayer
10.0% American Imperial Stout from Clown Shoes
Overall:
80 / 100
(Excellent)
650ml bomber purchased for me from Slowbeer by my brother Sam. I then cracked open the bottle and shared it with him, so you know, what comes around goes around.

Pours a deep dusty brown-black, with a solid frothy head of mocha, that collapses to form a crackly large-bubble crust. Lacing is solid and streaming. Body is fluid but quite thick, with immensely static carbonation forming in columns when the beer is tilted. Overall, it looks pretty good.

Nose is rich, dark and sweet, with some smoky overtones. Solid, classic American Impy Stout richness of chocolate, molasses, and mild coffee—perhaps missing the rounded richness that would come from some aging in oak, say—but making up for it with that definite smoky roastedness. It's either a profoundly dark brew, or it has a purposeful smoked malt addition. Either way, it's very clever and pleasant.

Taste is smooth, roasty and rich. Vanilla and chocolate make a dichotomous choreograph on the palate, balancing wonderfully the sweetness and light with the richness and dark. Deep toasted cocoa, smooth malt richness is always leavened and lightened by that sweetness—it creates a dance, a freshness, a sense of good overcoming evil. It's a very pleasant and refreshing take on an Impy Stout.

Overall, this is definitely very good stuff. I love how expressive it is, and yet how it manages to make something new of a well-established genre. The lightness in the feel and the balance that it brings to the palate is very pleasant indeed. Very, very good stuff.

Good to see some more US breweries getting a showing in Australia. This one purchased from Slowbeer in Melbourne.

Pours a solid and rather sensuously thick deep brown colour, quite dark and opaque in the deeper parts. Head is a fine topping of mocha-white, with some speckled lacing around the edge of the glass. Carbonation is fine, held beautifully by the body of the beer. Really looks good.

Nose is mild, nutty and slightly peppery, with a hop character that comes through as a point of clean, but direct sharpness. Husky grain, a bit of burned toast, and a hint of bittersweet chocolate come through, along with a dusty, dry note. It's almost as though it's going to get much of its bitterness from the grain, not the hops. Let's see.

Indeed, there are noticeable roasted characters on the palate, but the bitterness is clearly discernible as being hopsâthere's a sharp, clinging oily quality, but actually very little hop flavour besides the lupulin bitterness. This, however, mingles with the overtones of chocolate, brown sugar, and the spike of faint booziness to make it seem quite roasted and huskily bitter. Feel is smooth, but the sharpness and the surprisingly noticeable booziness tend to extenuate that a little.

Decent enough drop, but not particularly complex or full, and tending a little towards unbalanced. I've certainly had better American Browns, but this one does the job, if unimaginatively.