Smells a little odd. Grainy at first, but then gets a strong caramel note with a touch of corn, then a bit of earthy funk and maybe even some smoke. Not rich and complex, though. It's light, but definitely a fair bit going on.

Tastes decides on somewhat funky. Sadly it's yeasty, more than anything: has a strong bread yeast note with a touch of pull. Some lactic acid to it, again a touch of corn and maybe a slight lemony edge to the finish. Light, somewhat refreshing but certainly other characters could have been accentuated to prevent the yeasty stronghold.

Bit of bacterial pull in the mouth, actually feels quite lively. Is otherwise fairly flat. 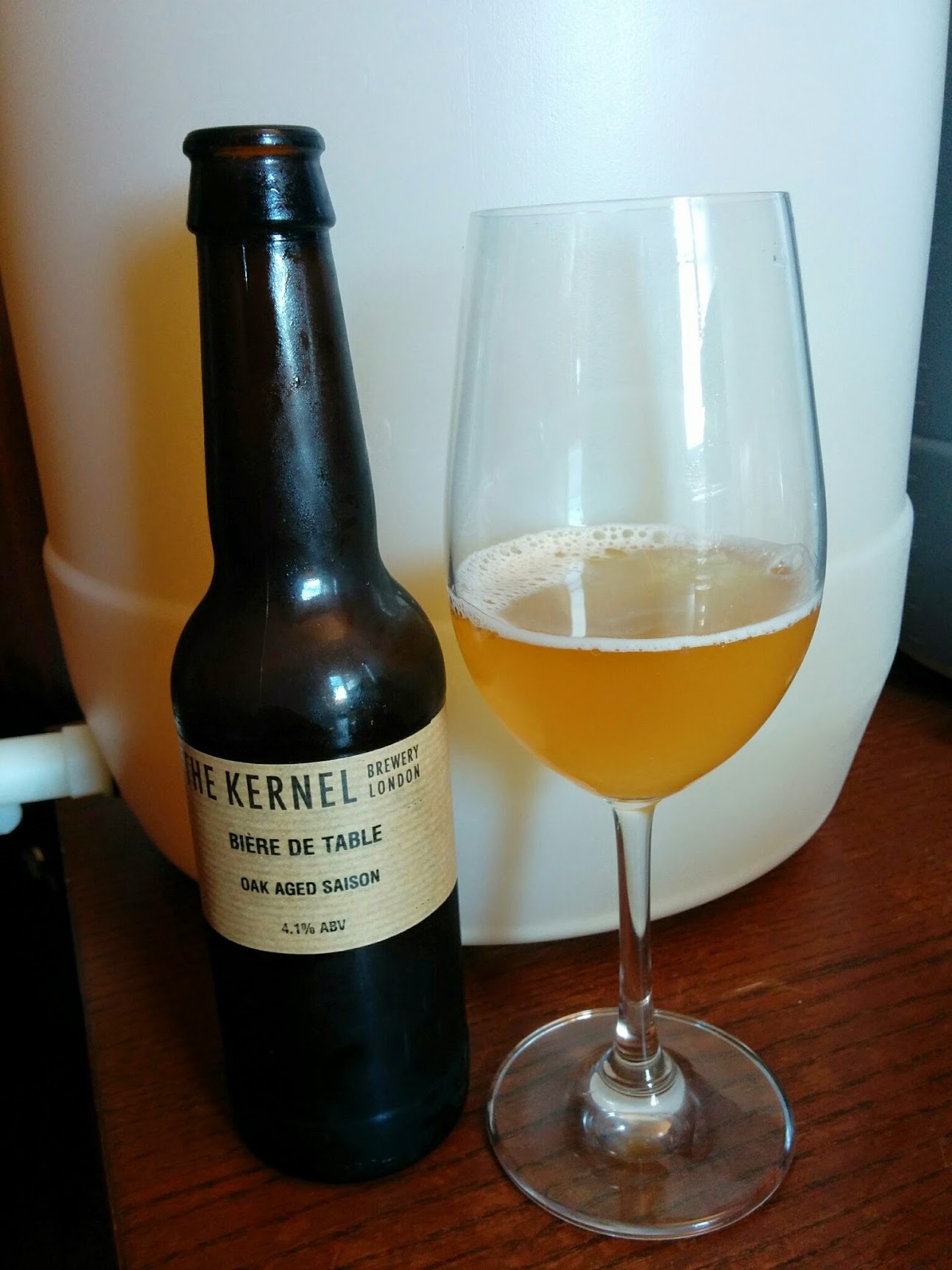 330ml brown bottle purchased from the brewery in Bermondsey earlier in the year, and I hadn't got around to drinking it yet, so thought I'd crack it open to cleanse after drinking a bottle of Tactical Nuclear Penguin with Sam and Rich.

Pours a pleasing mildly hazed, but stable pale yellow, with a fine ring of white as a crest. Some mild lacing, but mostly the foam seems quite light. Carbonation is beautifully fine, holding steady when tilted despite the fact that the body is quite light.

Nose is a pleasant, with a mild sweet tartness like lemon curd, mingled with a more organic, rustic grain character. Light carbonic character comes through as well, giving it a kind of soda bite. Mostly, though, it's very clean and bright. I like it.

Taste is very similar, but it's very much designed to be a drinkin' beer, clearly. Light, slightly bitter acidity, a touch of grapefruit and lemon pith, with a very light body. Carbonation is fine, but it does have a seltzer like quality to the flavour that adds to the suggestion of spritz. The back has more mild citrus characters and a very clean finish. It's really very nice.

Feel is good. Light in the body, but with a fine carbonation to keep it elevated.

Overall, a very drinkable beer indeed. I split this bottle three ways, but that's really not the way to do it. This is the sort of beer that's easily drinkable by the pint, and I can imagine nothing better than having a free-flowing font of this on a warm summer's day.
appearance: 4.0 | aroma: 4.0 | taste: 4.0 | feel: 4.0 | drinkability: 4.5
IPA Amarillo Citra Summit
6.9% American IPA from The Kernel Brewery
Overall:
62 / 100
(Decent)

330ml brown bottle purchased from the brewery in Bermondsey when doing the Beer Mile. Brought back to Sydney and shared with Sam and Rich.

Pours a fairly hazed pale yellow-orange colour, with a very fine head of pure white that settles down to some mounds of pocked bubbles. Lots of very tiny specks of lace. Carbonation is fairly powdery. Looks good overall.

Taste is certainly a little richer. Here there's a fuller malt character which propagates the sharper hops characters. These stay as a slight grapefruit and crushed lemon peel character. Back is slightly pithy, with a bit of peach and more grapefruit bitterness.

Feel has a bit of weight to it, nicely enough.

Tried on-tap at the brewery on the Bermondsey Mile. The version I tried was 8.2% ABV.

Pours a deep, opaque black-brown with a fairly heavy weight behind it. Looks almost gelatinous in the glass. Head is a yellowed mocha brown with a fair, fine consistency to it that helps form lots of streaks and rings of lace. Carbonation is a bit coarse. Looks good overall.

Nose is toasty and warm. Roast comes through suggesting a touch of acid. Rounded sweetness like marshmallow is also present. Everything is well integrated and coherent. It's smooth and very aromatic.

Light acidic entry from the darker malts—it's just a buzz and disappears quickly, leading to smooth brown mid-malt characters and a solid body. Crispness on the back gives a smack of lemon and rye crackers with lingering overtones of dark chocolate and cherry. Finish is dry, leaving cocoa powder duskiness on the back.

Feel is smooth but light—perhaps another suggestion of lower-than-average pH. 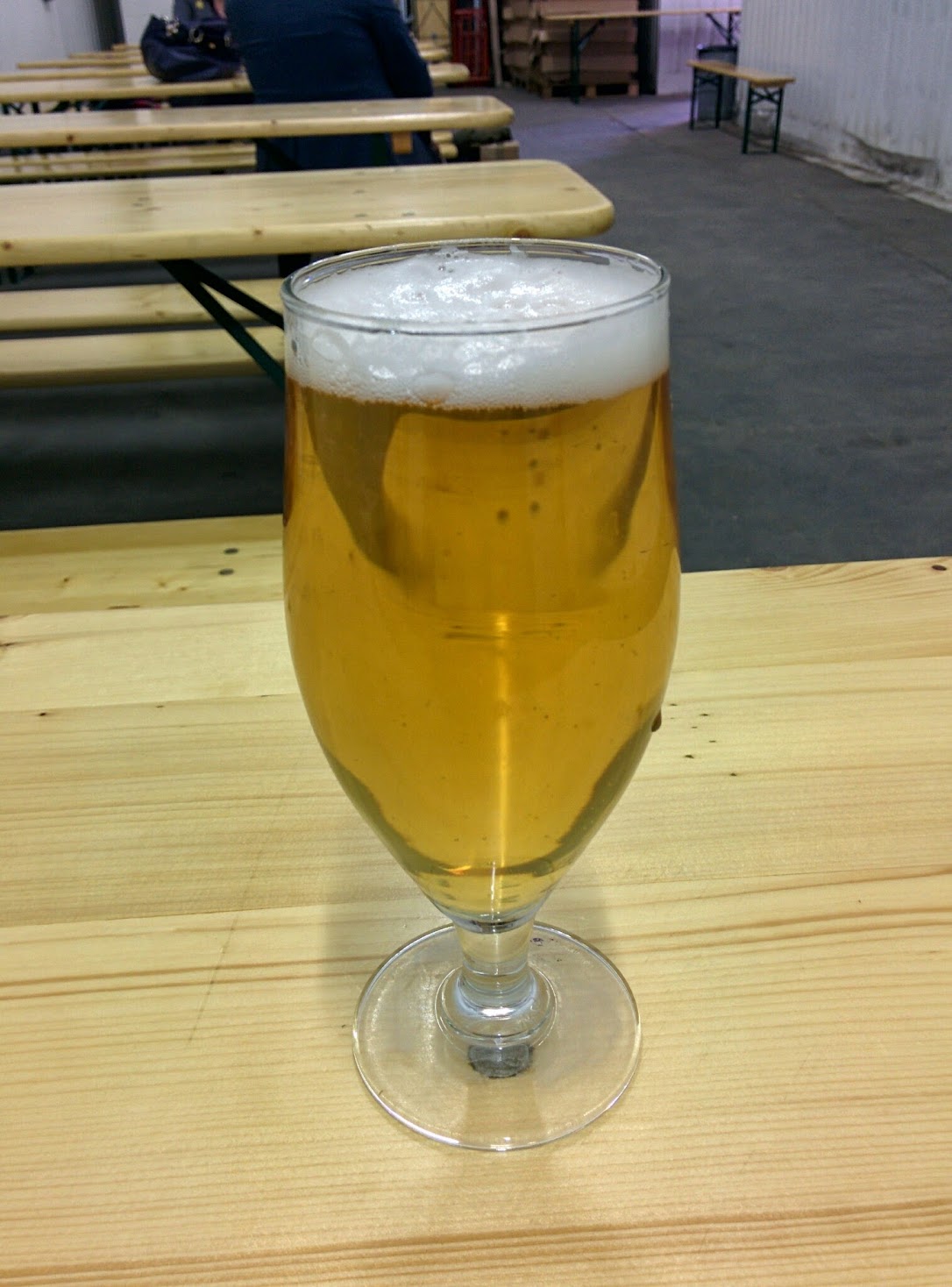 Tried on-tap at the brewery on the Bermondsey Beer Mile. This beer was apparently different again from their bottled "Bière de Table - Oak Aged Saison". This brewery has too many different beers... Wait, I don't mean that.

Pours a pale gold like fake jewelery. Very clear in the body and very light in weight. Head is a fine white, eggy mess, turning filmy at the edges. Lace forms in rings. Lots of coarse carbonation. Looks pretty decent.

Nice tartness on the nose. Apples come through along with a touch of grain, some lemon and sour worms candy. Vinous characters are also noticeable—there's the oak which gives a woody chardonnay note and a tartness like Sauvignon Blanc. Nice.

Zesty entry on the palate with an aspirin zing and green vinous characters. It's a bit down from here though as the body evaporates, and leaves behind a slight yoghurty lacto character. Sweeter notes on the finish: chalky candy hearts and light oaky wine.

Feel is very light. It's okay—it helps the drinkability but diminishes the potential complexity. 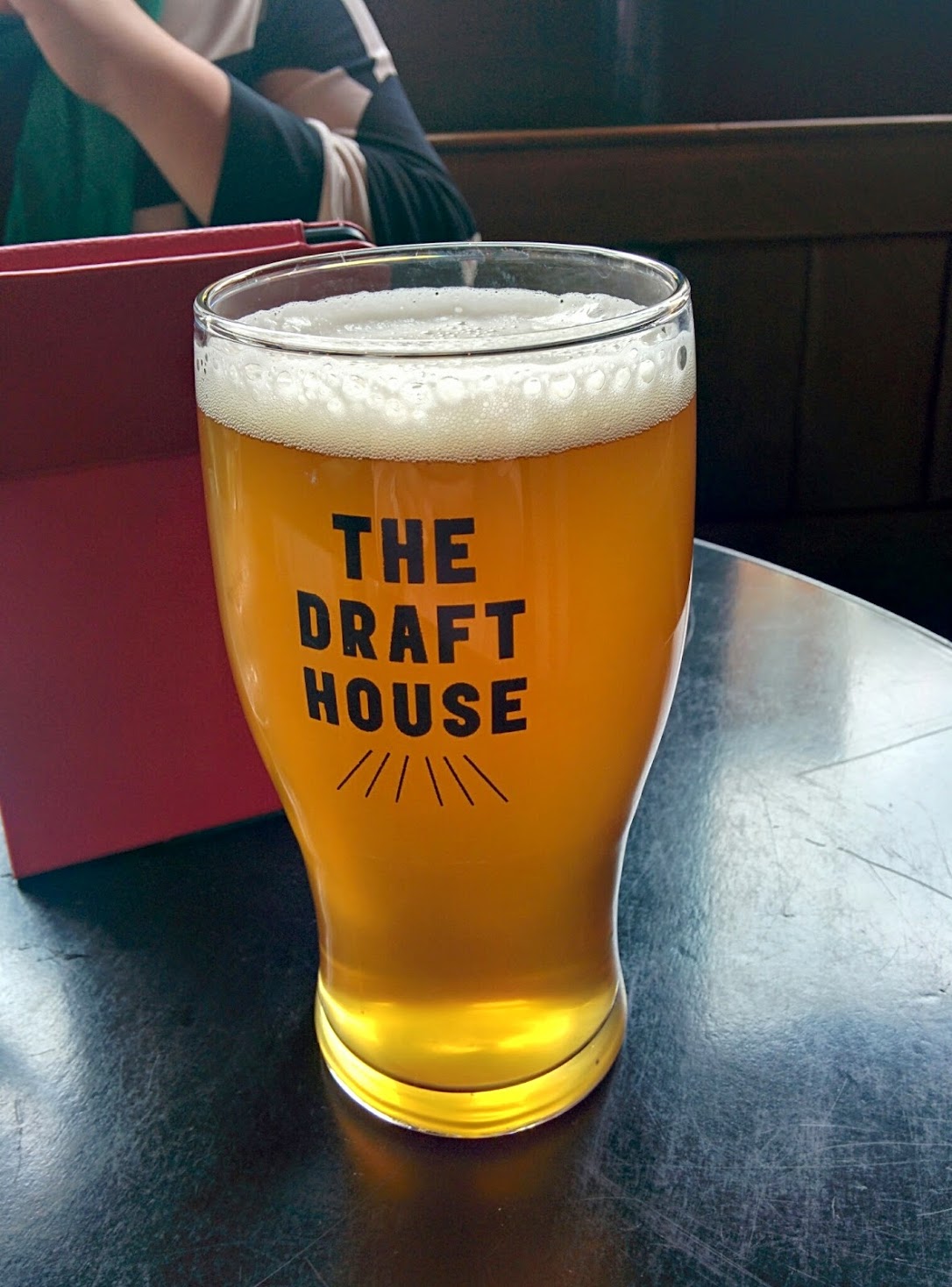 On-tap at Draft House in London. My version was 3.1% ABV.

The nose is tops. Big citra-fresh characters bright, sharp and piercing. Mandarin comes through well, with some sweet, subtle orange notes and rounded hop characters giving a lot of breadth. It's big, aromatic and refreshing—certainly better than I expected.

Taste is light—at this weight it probably can't be otherwise. Plenty of good characters to it. Fragrant citrus, pithy but sweet with zesty lemonade notes. A bit of soda, very little malt character. Pretty clean and pleasant all up. Feel is very light, which isn't surprising.

This is very, very drinkable and very sessionable indeed. Perhaps the carbonation is a little too high—a smoother version would perhaps be excessively drinkable and addictive. It's maybe a good thing that it's not.
appearance: 3.75 | aroma: 4.25 | taste: 3.75 | feel: 3.5 | drinkability: 4.25
IPA Columbus
7.1% American IPA from The Kernel Brewery
Overall:
64 / 100
(Solid)

Pours a pale, bright yellow colour, with fairly solid hazing. Body is light for the most part, with fine static carbonation when swirled or tiled. Head is a filmy but fine white that leave solid, patterning lace. Looks pretty decent.

Light pithy entry on the palate, with some solidity. This develops into a lemonade powder/preserved orange twang, perhaps something like marmalade. Back has bitter aromatics of Campari. Aftertaste is surprisingly sweet, more lingering marmalade and toffee.

Feel is very light: this would aid drinkability, except for the sweetness on the back, which really shuts things down.

The sweetness on the back is too much and makes the beer a bit unbalanced overall. It's not bad, but there's certainly some characters which disappoint me overall. I'm sure there are better brews from The Kernel.
appearance: 3.75 | aroma: 4.0 | taste: 3.5 | feel: 3.5 | drinkability: 3.25