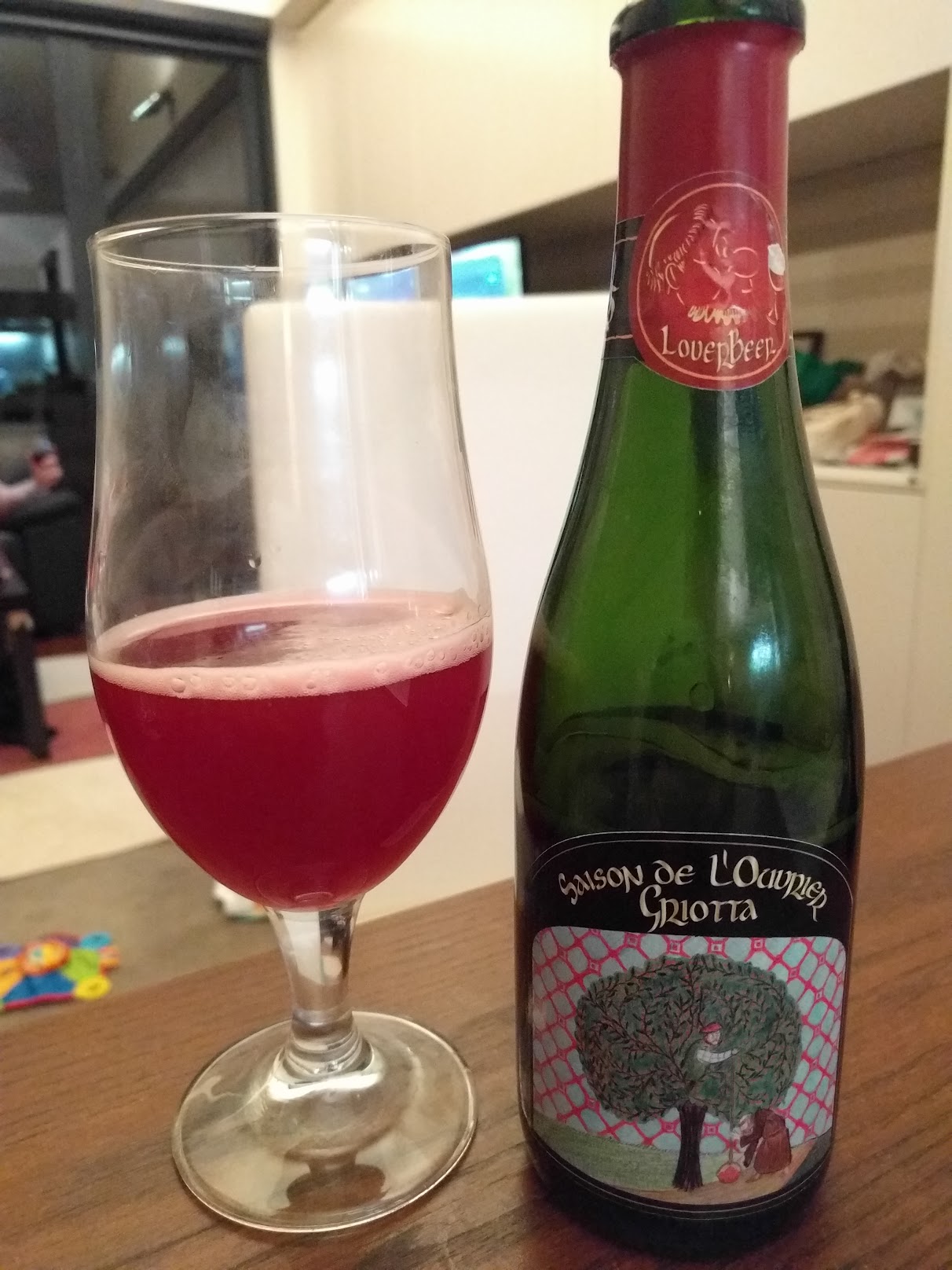 Pours a surprisingly bright pink colour (served me right for not reading the rest of the label beyond "saison"), with a pale salmon head that fuzzes out to just a fine ring. Looks pretty flat after this, although there is some very fine carbonation when the glass is tilted. Looks pretty good.

Nose is slightly earthy, but with an underlying suggestion of tartness. Cherry pip and stem notes give notes like cherry cola more than the aroma of a kriek, for instance. Aromatic notes of crushed pepper and a vinous, tannic note. I like it.

Taste is good as well. It's quite light and thin through the centre of the palate, but with a bright burst of cherry towards the back. Again, it's a particular cherry flavour that I associate much more with confectionery and sodas than with beer. It lingers aromatically in the finish, evanescing into more of an aroma as the beer disappears. Finish is a little tart and tannic.

Feel is light and a little bit slick.

A very odd beer this one. No yeast is pitched: instead natural yeast from added grape skins ferments the beer, much like the process you'd expect from traditional wine-making. Tried on-tap at Open Baladin in Rome.

Pours a deep, purplish red, initially with some pinkish foam forming, but this settles out to almost nothing by the time it arrives at the table. Carbonation is weird. It starts out almost like a reverse cascade, but quickly runs out of steam and ends up flat. Very unusual at the very least.

Nose is weird. There's no denying it. Fairy floss, cherry and a cranberry tartness. It smells a bit like non-alcoholic wine—grapy musty, but not really vinous in the proper sense. And there's those candy characters as well, floss and strawberry bubblegum. Extremely odd stuff.

Taste has more of the wine characters. Slightly tarter, a little tannic on the front-to-mid. More cranberry comes through, creaming soda and pinot noir grapes. Wet but limp through the centre. Fizzy alka seltzer and aspro clear in the finish. Feel is not very full. It leaves the beer hanging and it needs a bit more.

Overall, this is utterly unique stuff—and really genuinely strange. I always love when a beer gives me such a new experience. I'll give it an A for originality, but it's not a fully realised beer.
appearance: 4.25 | aroma: 3.75 | taste: 3.5 | feel: 3.25 | drinkability: 3.5
Papessa
7.0% Russian Imperial Stout from LoverBeer
Overall:
67 / 100
(Solid)
Tried on-tap at the Local Taphouse in Sydney.

Pours a deep brown colour with a rather thin, reedy body. Initial bubbling in the head settles out very quickly, ending up looking rather flat. Looks decent without being very exciting.

Sharp and vinous on the nose, probably a bit sharper than I expected. Acidity comes through, apples and red wine, with just a little bit of dusty darkness. It's okay, but I'm not sure I expected this.

Black olives on the palate immediately. Dark and dusty for a while, but more berries and more of that vinous character. Crisp acidity again, lots of oak and a fair amount of liquorice. It's quite complex, and very strange. I'm not sure it's meant to taste like this, but surprisingly it works even so.

Feel is solid enough. It works at least.

It does taste like it's infected or inoculated. I hope it's the latter, because it's fairly decent as it is. If it's not intentionally soured though, this is a worry. I'll keep drinking it, but perhaps with a more skeptical look on my face.
appearance: 3.5 | aroma: 3.5 | taste: 3.75 | feel: 3.5 | drinkability: 3.75
Papessa
7.0% Russian Imperial Stout from LoverBeer
Overall:
58 / 100
(Decent)
Pours a dark brown, no head. No lace. Looks like a heavy homebrew to be honest.

Smells incredibly sour and funky. Hugely spicy as well, with lemon pepper, barnyard and balsamic. Touch of roast. Interesting, I'll give it that.

Big funky spice taste. Balsamic vinegar with leather, astringent off cider and szechuan pepper bite. Blended with a touch of chocolate base. Not very stouty, but very weird. Not an everyday drinker, but interesting enough to be tasted.