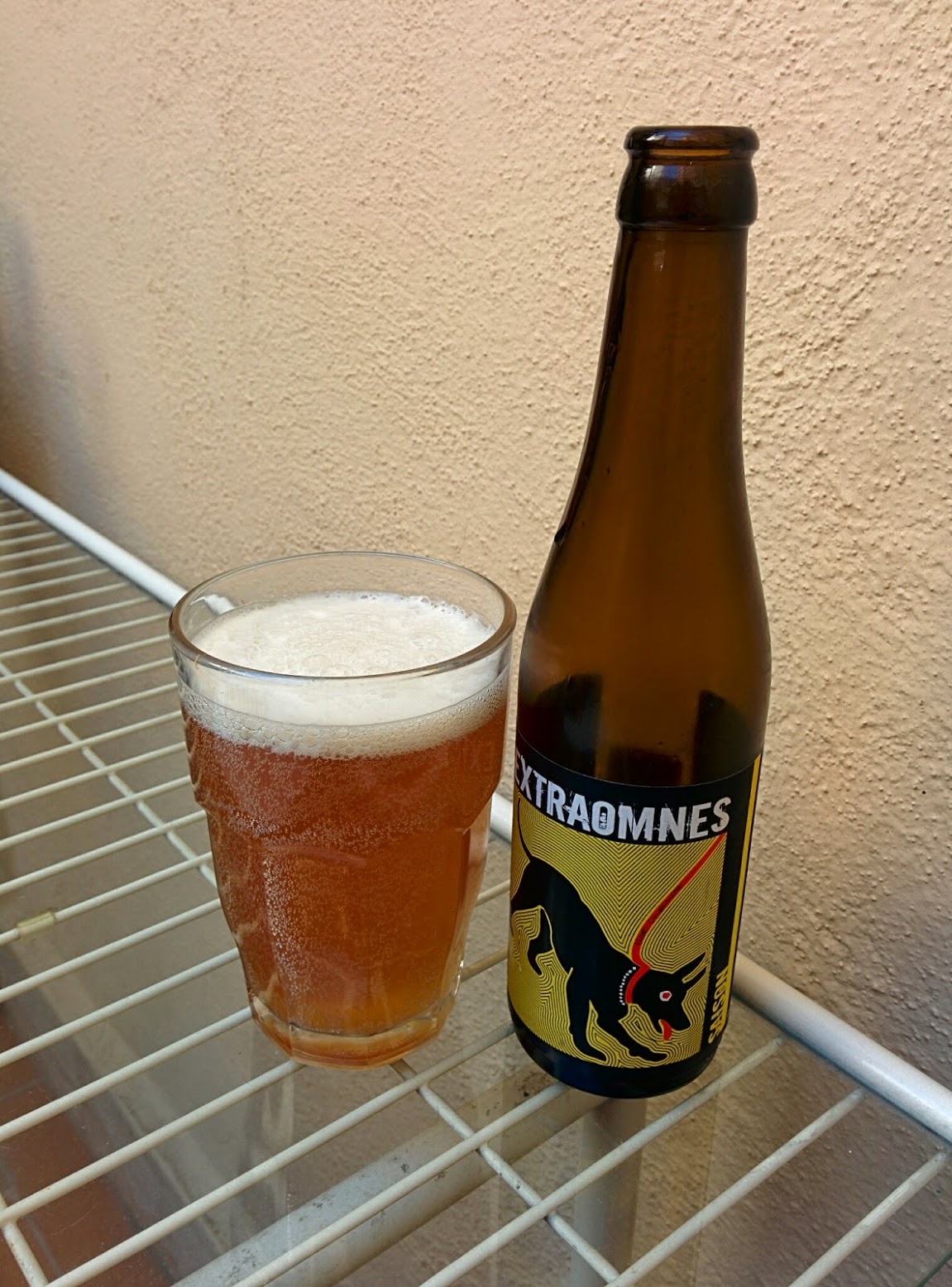 Pours a very hazed, fairly dark golden colour, murky and still in the body. Head forms a very coarse-bubbled crest of whitethat settles out to some filmy pocked bubbles. Lacing forms patchily. It doesn't look all that great. Acceptable though.

Nose is fairly muted, but it has some rounded Belgian tones at least. Slight herbal qualities come through a little, and a suggestion of peppery spice. But there's not a lot to it overall, and to be honest, I'm a little unenthused.

Taste is also uninspiring. Spicy, peppery notes on the mid palate give some bitterness, and a rather harsh, medicinal herbal character sticks around to propagate this bitterness right to the end. Body is very light, with no trace of that rounded sweetness the yeast suggested on the nose. Overall, it's a bit dead, and a little difficult to drink.

Overall, this is a disappointing effort from Extraomnes, who generally do good things. This is a lethargic attempt at a saison, that only really barely scrapes over the genre line.
appearance: 3.0 | aroma: 3.0 | taste: 2.75 | feel: 2.75 | drinkability: 3.0
Extraomnes Straff
9.5% Belgian Strong Pale Ale from Extraomnes
Overall:
68 / 100
(Solid)

Pours a very hazed golden colour, with some orange at the deeper parts. Head forms as a slushy white crest, but settles out to a pocked film across the top. Lace forms in places, but is pretty inconsistent. Looks a bit flat—I hope better things are coming up.

Nose is indeed better, with a nice mix of earthy grains and pronounced Belgian ester characters. Solid rounded sweetness, not a lot of spice, but some boozy characters from the surprisingly high ABV. It's pretty solid.

Taste is also good. Clean and forthright on the front, with a touch of spice that comes in on the mid-palate, giving a touch of cloves and some crushed watermelon. Malt is light, but structured, giving body and basis to the beer right through to the back. Finish is a bit light, but given how high in alcohol it is, that's quite something. Mouthfeel is soft, but with a click at the back which gives it a pleasant sendoff.

Overall, this is actually pretty good. It doesn't have the complexity of the best Belgian examples, but the Belgian genesis is apparent, and the beer is pretty well-made. The 9.5% ABV is well-hidden, which really aids the drinkability—more depth and character would make it exceptional.
appearance: 3.25 | aroma: 3.75 | taste: 3.75 | feel: 3.75 | drinkability: 3.75
Extraomnes Donker
8.5% American Imperial Stout from Extraomnes
Overall:
70 / 100
(Very Good) 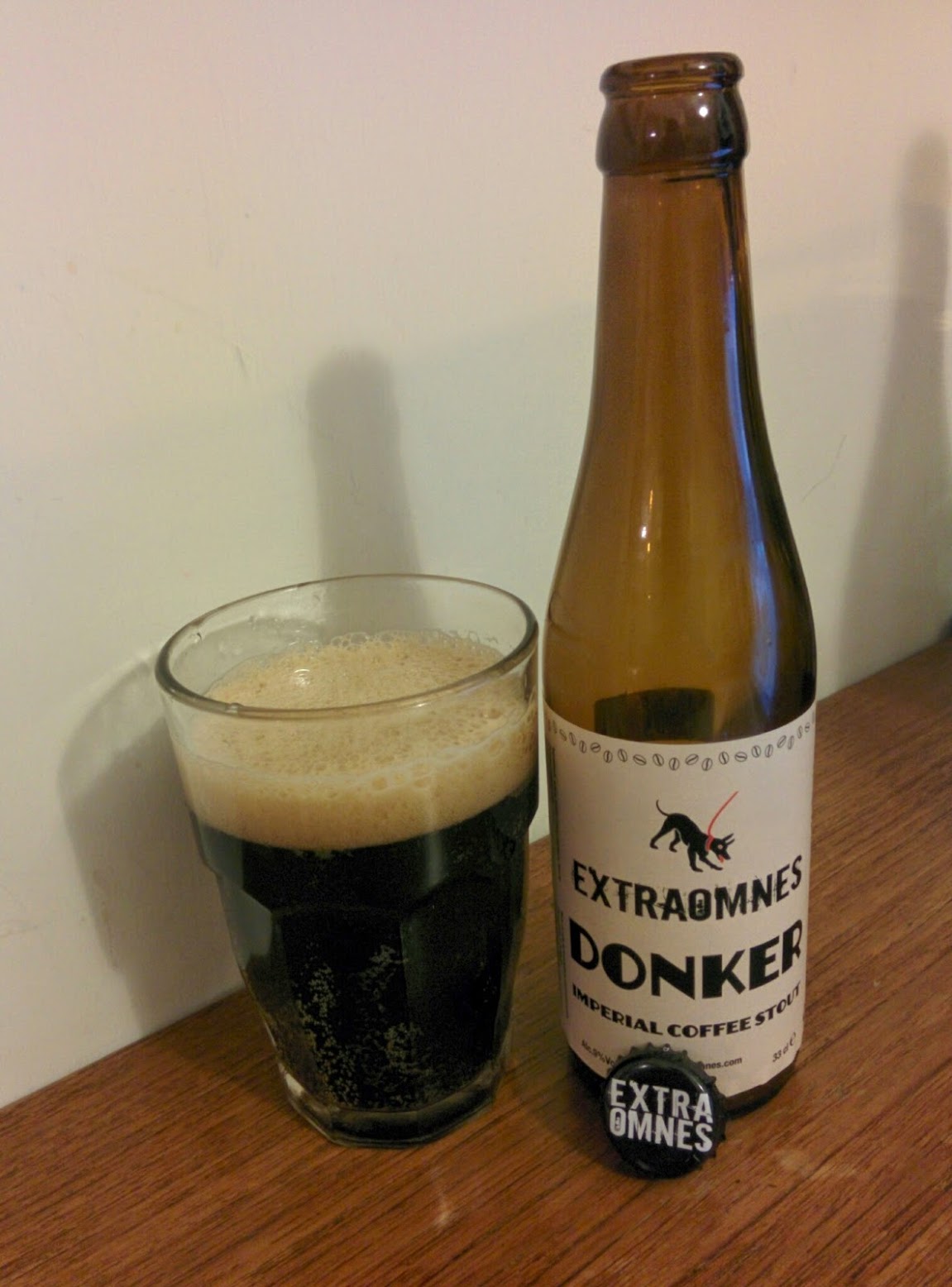 Pours a deep dirty brown, hazy and opaque, with a pocked, pancake head of beige. Lacing forms in spots. The body is surprisingly light and fluid. Otherwise, it looks pretty good.

Nose is rich with solid coffee aromas, sharp, spicy and slightly hot. Noticeable fruity chilli characters, fresh like cut green capsicum, but with an underlying sweetness like high-cocoa chocolate. The malt is subdued by the coffee addition, meaning that it probably wasn't all that strong to begin with, but the aromas are very pleasant nonetheless.

Taste is also solid, although the lack of malt is noticeable here, and the lack of body. The coffee is pleasantly balanced: giving a firm roasty note and leavened fragrant characters of pepper and spice. There's a genuinely lack of sweetness though, especially for a 9% ABV beer. It means the stout aspect is lessened somewhat. Feel is also a bit weak. It's still very tasty, but certainly less than others of its genre.

It's a good beer, and certainly one with a lot of heft behind it. While there are things I don't like all that much about it, there are many more things that I enjoy. It's certainly worth seeking out—it's an interesting beer with a good use of coffee.
appearance: 3.75 | aroma: 4.0 | taste: 3.75 | feel: 3.5 | drinkability: 3.75
Migdal Bavel
6.66% Saison from Extraomnes
Overall:
73 / 100
(Very Good)
330ml bottle purchased from K&L Wine Merchants in Redwood City, CA. Shared with Sam and Rich in Sydney.

Pours a quite cloudy dusty yellow colour with a slightly foamy head of white. This settles to a decent centimetre of persistent head. Carbonation is powdery, and roils and froths in the body when swirled or tilted. Lacing is good, forming slick streaks. Overall, it looks pretty good.

Nose is dusty and minerally, with a slight earthiness and a green vegetative note. Some pepper and an aroma like old orange peel. It's a bit light on, but it's relatively pleasant and captures some good Saison qualities.

Taste is much better, with a fullness in the body, and a fruity vegetative character like green capsicum and celery leaf. The yeast lends peppery tones to the beer while a wheatiness lends some mild fine acidity underneath. There's a clinging plasticky tone on the finish which is almost like the opening aroma of a lambic, but it also suggests a bit of alcohol heat. Feel is quite smooth for the most part, with a crispness on the back to complement the heat that arises.

Overall, very drinkable, with complexity and a good deal of sophistication. There are a few oddities, but they seem well-placed to create interest. I did enjoy this a lot.

Pours a very pale straw-gold colour, quite clear with white foamy head. Not bad, but could use some more head, plus I don't mind a bit of cloud in any Belgian styles, really.

Smells quite big, with lots of grains. Smells quite like barley husks with a slight nutty edge. Spicy, touches of fruit esters coming through the big booziness. A bit simple, really. Smells big, but unnuanced.

Taste is quite sweet too, also with a slight nutty edge. Plenty of fruit in there as well with a big boozey whiff coming late. Notes of pepper, mediciney characters, vanilla on the back as well. Touch of brandy to the alcohol. Decent, but again way simple for the style, doesn't quite layer on the flavour and complexity the way other Tripels do.

Bit of booze heat, otherwise OK on the texture.

Not as complex as a tripel should be. Touches on the right notes but doesn't explore them in depth.

appearance: 3.5 | aroma: 3.5 | taste: 3.5 | feel: 3.0 | drinkability: 3.5
Extraomnes Zest
5.3% Belgian Blonde Ale from Extraomnes
Overall:
65 / 100
(Solid)
Pours a pale straw colour, distinct cloud throughout the body. Head is white in colour, large bubbles but nice density to them, and retains thick and meaty on the sides of the glass. Very pale but looks great.

Wow, basil on the nose. No mistaking it at all. Touch of lemon to it as well but overwhelmingly herbal. I'm intrigued, but I really can't get much more than a basil aroma.

Same again on the palate. Slight fruity edge but a big load of herbs. Funny ol' beer. Touch of tang, but more herbs than anything else. Quite savoury at times, but there's a certain level of refreshment from it as well. Glad it's only 5.3%, any stronger and we could be going into very rocky waters indeed.

Foamy, nice body. Not bad at all on the texture.

Not sure if the flavours I'm getting are all intentional. Not very Belgian, some unique characters creeping in which could be a delightful quirk or some egregious error. But the beer overall is not bad at all, and there are some very nice refreshing notes as well. Worth a try.
appearance: 4.0 | aroma: 3.5 | taste: 3.5 | feel: 4.0 | drinkability: 3.5
Extraomnes Zest
5.3% Belgian Blonde Ale from Extraomnes
Overall:
76 / 100
(Excellent)
On-tap at the Italian SpecTapular festival at the Local Taphouse in Sydney.

Pours a very pale, slightly flat yellow colour with a light body and solid haze. Head is a full crown of white that leaves some solid, sudsy lacing.

Aroma is great, but very strange. Zesty (as should be expected), with some greener hop characters and some true herbal notes. Big aromatic characters of sweet basil and fresh spearmint. It's insane: one of the most herbal and fresh beers I've ever smelled.

And yet, the immediate flavour on the palate is...? Nothing. Not a drop when you first sip it. It takes a little time after it's been in your mouth before those herbal characters come through, lending more basil and mint, along with a bit of roundness from the yeast. Finish has the measure of it: bringing a nice clean and sharp bitterness to clear everything out after the oddness that preceded it.

Feel and aftertaste is clean and bitey, even though the feel itself feels very, very light.

Overall, I wasn't quite sure what to make of this beer. It's really quite unusual, but at the same time, simple, bright, clean and crisp. Whatever I made of it, it was one of my favourites at the festival.

Had on-tap at the Italian Spectapular at the Local Taphouse in Sydney.

Nose has a slight Belgian roundness to it along with some bland, pedestrian spice characters. This is trumped by a very dry floury time aroma that doesn't really do anything for it. Pretty bland overall.

Taste is clean but very dull. Roundness from the Belgian characters, with a mild, floury yeast finishâit's getting towards offensive there. More spice, in a very generic kind of way. Overall, it feels rather cloying after a while. The feel is smooth, but it cloys as well, despite feeling weak.

Not a fan. This is a poor parody of a tripel.