Pours a brown colour, quite dark towards the edge. Beige foamy head that dissipates quickly. Nice colour, but a bit listless.

Smells minty; fresh and chocolatey. Notes of cocoa-rich chocolate and caramel sweetness on the nose, with some herbal and woody characters mingling with the mint, maybe some licorice as well? Smells pretty damn good.

Tastes like what it promises; maybe a bit predictable. Chocolate on the front that gets quickly fresh, herbal and a little spicy with some big peppermint notes. Touch of roast that lingers towards the back as well, and it's overall a bit heavy, and sweet. The peppermint is strong but also sweet and it could use a bit more cut-through. Still, very enjoyable.

Smells nicely of oak, with a good organic wood note blending with some funky Brett tartness, plus lemon and passionfruit from the hops. Pleasing blend.

Taste is great. Loads of oak on there, woody and sweet in equal measure together with a big funky sour Brett note. Develops some piquant spice late-mid, with coriander seed, black peppery notes and there's a faint background hint of the hops, citric and floral, but it's largely dominated by that oak character which is really pleasant and complex.

The body lets it down though, it's flat and untextured, and really thin. Disappointing from such a big beer, I feel like the 'infection' in this beer has killed a lot of the vibrancy. 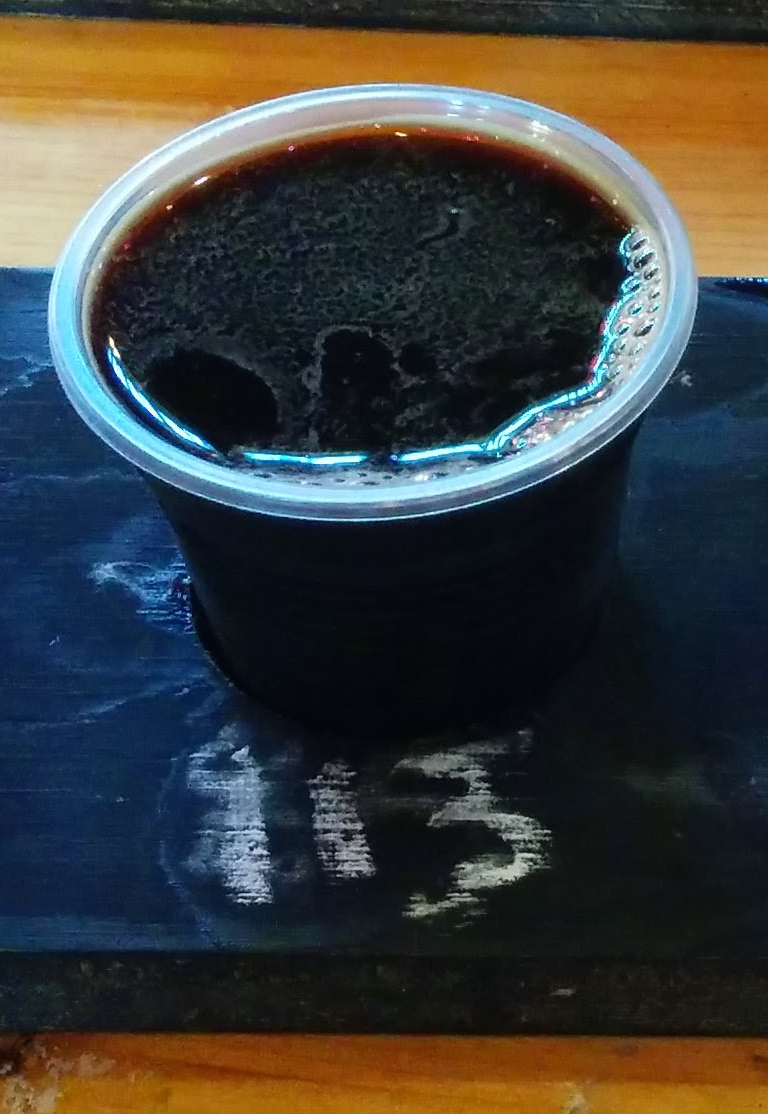 Pours a very deep black-brown that could be opaque just from colour. It does show clarity at the edges, however. Body is solid, and holds a little fine carbonation. Head is dark brown, and firm and fine leaving rings of lace. Looks good.

Nose is pleasant with a little grape juice and texta ink, backed up with some raisins and true tannic sharpness like old oxidised red wine. There's a smoothness underneath that gives a suggestion of banana too. It's pretty interesting.

Flavour has lots of barrel in its genesis, more of those red wine tannins. Astringent through the centre, and slightly ashy towards the back, with a touch of chlorine, and a linger of concord grape. Aftertaste is woody, with more of those ephemeral banana esters and mildly unpleasant inky chemical tone.

Feel is full and very decent.

It's okay in the end. Not great, but certainly with a lot of flavours and interesting things to explore.
appearance: 4.0 | aroma: 3.75 | taste: 3.5 | feel: 3.75 | drinkability: 3.5
One Night in a Black Tent
8.5% Spiced Beer from Van Dieman Brewing
Overall:
68 / 100
(Solid)
Pours a dark brown colour with sparsely-webbed beige head that dissipates too early. Decent colour, but meh otherwise.

Taste is quite sweet with distinct bourbon oakiness. Some roast and a touch of peppery spice as well as floral hop notes. Umami and savoury coming through as well on the back as well as spice character. A bit confused, but enough to like in there.

Full body, slight tingle from carbonation and a touch of alcohol heat. Not bad.

Pours a golden amber colour, far from red, but with some depth at least. Solid hazing forms through the firm body. Head is a fine off-white. Lace forms in thin sheets. Carbonation rushes through. Looks decent enough.

Nose is pleasant. Peach stone with a biting sour acidity turning slightly vinous after a while. Balancing this is a sweeter, rounded oakiness that helps put everything back into order. Again, pretty decent.

Light, crisp entry on the palate. A little cherry pip and more clean astringency. There's a strange buttery sweetness through the centre—it could be the oak, as this turns slightly woody and a little astringent on the back. Finish has more sweet oak characters, and a little brettiness. Heavy aftertaste.

Feel is light but chewy.

The oak is a little heavy-handed, but there are some nice elements to it. It called itself a Flanders Red, and I'm not sure it's quite successful on that front, but it's a decent beer taken on its own terms.
appearance: 3.5 | aroma: 3.5 | taste: 3.5 | feel: 3.5 | drinkability: 3.5
Dubbel Shot
6.6% Dubbel from Van Dieman Brewing
Overall:
70 / 100
(Very Good)
A 'Belgian coffee dubbel' brewed for the GABS Festival in Melbourne. Tried there on tap.

Pours a mahogany colour, quite pale really, with off-white head, fairly foamed out but dissipates quickly. OK I guess.

Caramel malt character upfront, not too sweet but with a hint of residual sugar, then develops spicy coffee notes towards the back with a touch of licorice and some decent Belgian phenols late. Coffee is a lot subtler on the palate than on the nose. It's certainly not worse off for it, though. Great drop.

Body is disappointingly thin and flat. No real texture to it and no real mouth presence. A shame, really.

Poured half the bottle carefully into a glass, avoiding any sediment. A clear, but extremely effervescent beer is the resultâbold red in colour, with a good 5-7cm of spongey foam sitting above the body. The colour is nice, but the carbonation in the body seems excessive. Overall, not a bad looking beer, but I can see burping in my immediate future.

Nose is a pleasantly mild funky character, with a hint of vinous acidity to it. Some oak, a little berry sweetness, but the promise of refreshment whatever else. It has a slight coppery edge to it, and underlying everything is a dry, slightly floury tone. If that gets too prominent on the palate, it could be a problem. But the nose is nice.

Taste is, fortunately, cut from the same die: a clear, refreshing, slightly wild, but not exceedingly sour body, that leaves a dry and clean finish. There's a herbal flavour fluttering around the edges, and there's very little body to it overall, which is not unexpected for a wild. Not much in the way of malt or sweetness, or berry characters at all, except perhaps for the lightly herbal, perhaps slightly bitter sloe.

Overall, though this is good stuff: nicely balanced, clean, refreshing, and with a wild edge that doesn't trample over everything else. I think this is a much more sophisticated Hedgerow than their previous release. I'll be looking forward to next year's with greater anticipation as a result.

Pours a fizzy, cloudy copper-amber colourâthe head dissipates really quickly leaving some large-bubbled film and a ring of insipid nothingness around the glass. Body has a little heft to it, but overall, it looks a bit weak.

Nose is surprisingly interesting: slightly spicy, with slight acidity and a savoury fruit bitterness coming through. Hints of juniper and crushed leaves, along with a grainy, toasted bread or rye crispness. Very interesting.

Taste is also very good. Crisp husky grain character provides a firm basis, on which is layered more of those savoury fruit characters, giving a light organic bitterness. There's also a pleasant creaminess to it, aided by the heavier than expected body. The rosehips perhaps lend the only fragrant sweetness to the mixâthe hawthorn and sloe berries are husky, organic characters.

Really interesting brew. More than anything, it reminds me of a Scandinavian Sahtiâit has that same sweetness tempered with organic non-hop-based bitterness. Fascinating to see and Australian brewery doing something similar.


Bought from a bottle at Knopwood's Retreat in Salamanca.

Pours a burgundy or reddish-amber colour. Minimal head from the pour, even with some vigour applied. A little carbonation, but it's large bubbled and doesn't conduce the foam. Thin body. Looks pretty average.

Nose has a bit of malty grain, but very thin and light--a little roastiness is present, but it's fleeting. Also something green and organic, with a little bit of acidity. Not bad, but still, pretty average.

Taste is rather sweet but thin. Carob is dominant, giving a light watered-down malt character. Thin backbone, and very little body to it, although some sweet roast does come through on the back. It reminds me of dodgy black lagers, or poorly crafted dark ales. Bit of acidic black in the finish.


Had on tap at the New Sydney Hotel in Hobart.

Pours a cloudy but bright pale lemon colour. Head is pure white, but with quite a frothy bubble to it. Lacing forms in honeycombed patterns crusting down the side of the glass. Looks decent.

Slight wheat acidity on the nose, but that's about as close as it gets to proper witbier territory. Some sweetness, a bit of armpit and a slight twinge of organic freshness, but it's very light. No spice, no depth.

Taste is also very light. Sweet graininess on the back makes the whole beer taste both hopless and spiceless. Carbonic acidity on the back just froths the palate, even though it's empty. Some wheaty grain, and an almost Pride of Ringwood sting. Eh.

Feel is light and empty.

Drinkable enough in its way, but it feels too sweet without any spice or anything to cut it back.