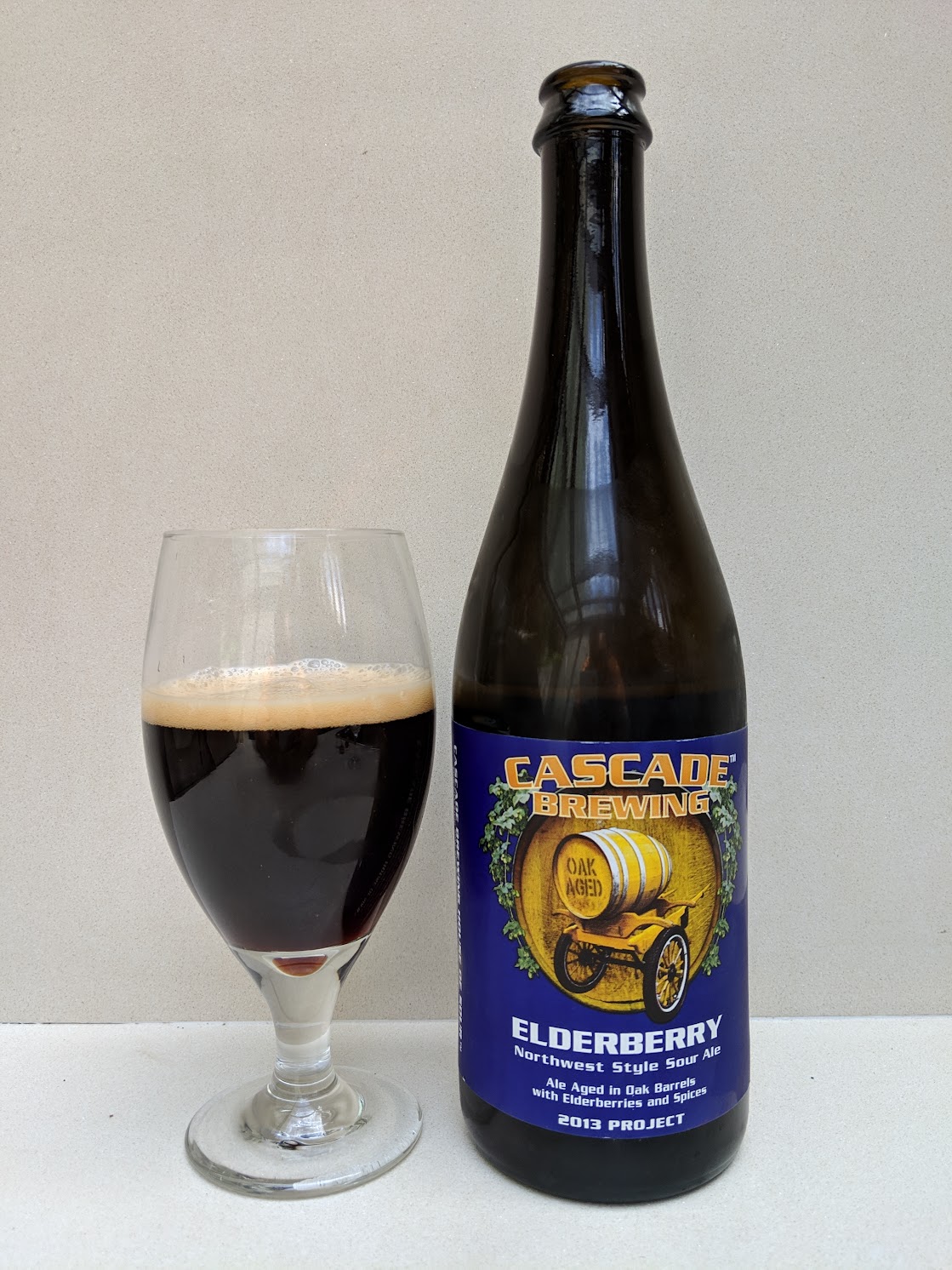 750ml caged and corked bottle purchased from Ales Unlimited in San Francisco, CA. Shared with Sam back in Sydney. I've tried this from a live cask at Cascade in Portland, but this is the first time I'd had the bottled version. This was the 2013 edition.

Pours a deep chestnut brown with red tinges at the edges. Head forms a coarse mass of beige that persists as a fine ring. Lacing is minimal, but we get some long streaks over time. Carbonation is very fine, and swift.

Nose is sharp, perhaps too sharp. It's a biting acid character, but it almost trends towards metal shards and petrol. It's a little better as it warms, as a little of the fruit comes through—but to be honest, the fruit is itself a tart aroma, and it doesn't mask some of the tighter more intense characters. Underneath this all are sweet characters of sultanas and currants.

Taste is much, much better. Here, the fruit is expressed beautifully, leaving the tartness to provide the structure but not overwhelm the palate. There are definitely raisins and dried fruits through the middle of the palate, and they works nicely with both the acid and the brighter fruit notes. Towards the back, there's a little bit of aromatic oak. Finish is very long—it's extended by the acidity, and a slight evanescent heat of booze.

Overall, I'm a fan. I do think this is much better in bottles with a bit of age on it than it was when I tried it live and raw. But even now, it's a vivacious beer, and it has a lot of punch that remains untamed. This is the sort of beer that will probably still be kicking 10 or 20 years down the track.

Pours a deep, deep red hue with a gorgeous gradient of haze through the glass. Head is a fine, bubbly ring of white. Body is solid, as you'd expect for a beer of this size. I just love the colour and the partial hazing. It looks amazing.

Complex aroma: big oak characters, mingled with true acidity, pinot noir and cherries. Lactic bite comes through to brighten it: despite all of the oak and vinous characters, it feels light overall. Lovely stuff.

Light acidity on the entry gets smoothed by a creamy sweetness, although the acid keeps popping up throughout the palate. Mid-palate has some more vinous and oak notes along with true fresh cherry characters, before a move to rubbed spices and cinnamon on the finish. Wow. Such complexity. The feel is suitably light and crisp.

The only down side is that this is a powerfully acidic brew after a while, and you feel it: you couldn't drink more than one without it starting to hurt. But oh god, is this good. It's so damn good.

Among the wilds, the barrel-aged and the spontaneously fermented, Cascade has some surprising forays into other genres. This is the departure I tried at their barrel room in Portland, OR. This batch was labelled 7.85% ABV.

Pours an orange-amber hue with very solid and light-capturing haze. Weight is pretty solid. Head is a wild, windswept white that leaves some solid sheeting lacing where it blows. Fine carbonation, although it's hard to tell for sure with the haze. Overall, it looks really great.

Only mild hoppiness on the nose, but pleasant nonetheless. Slight organic grassy notes mingle with a hint of fresh cherry and some light, malty grain. It's solid, if not groundbreaking.

Clean, bright and spicy entry promises much on the palate, but it disappointingly falls away to a rather thin, reedy mid-palate. There's not much malt to speak of, and this leaves the finish bone-dry, and vulnerable to the grassy clinging bitterness of the hops. Feel is light as well, as a result, but the hop bitterness packs a punch.

Overall, it's not a bad brew. It's a little unbalanced, which is my only real concern. Otherwise, it's a solid, if somewhat pedestrian IPA.

On-tap at the barrel room in Portland.

Pours, indeed, bruin, with a touch of red and some haze in the firm, but fluid body. Head forms a solid ring of yellow-white. Not much visible carbonation. Overall, a very solid and very appealing looking beer.

Nose is fabulous. Spicy and acidic but very complex. Some earthy pepper, with oak lending a smoothness but also a contrasting woody sharpness that mingles with a minerally edge and a brusque sweetness like smoky caramel. Impressive stuff.

Light clean entry moves into a crisp, vegetative flavour that leaves some pithy cherry. Back is where the business is though, where a mellow and surprisingly smooth vanilla note comes up to give a velvety tone to the omnipresent acid. Feel is super smooth, with the sense that there's prickles under the smooth veneer.

Very impressed with this one. It's pretty light overall, and the acid is pronounced, but for some reason you just don't notice it when you're drinking it. Great stuff.

Had on-tap at the taproom in Portland, OR.

Pours a deep golden colour with solid hazing. Weight is quite light, but it holds very fine carbonation. Head is a firm, consistent white that leaves some lace.

Nose is hugely prominent with ginger, leaving a spicy hot afterimage on the olfactory organs. There's some hint of peely lime coming through. It tastes very bright and very robust: it almost seems fake.

Light crisp entry gives ginger spice and a hint of light vinous characters. The ginger continues but the wine drops away, building up a candied sweetness on the mid palate, before a very dry and very crisp and sharp exit leaves a biting brusqueness, and some soda characters. Feel is sparkling and clear.

This is a really bright, refreshing and awesomely drinkable brew. I've never had a better ginger-spiced beer before. Great stuff.

Tried from a "live barrel" at the Cascade Barrel Room in Portland, OR. This was edition III.

Pours a reddish amber colour, with a surprisingly clear body (didn't expect that from a barrel, especially not a live one). Weight is light and fluid. Head? Well, there's no head to speak of at all. Neither is there carbonation. All oddities, but expected oddities.

Nose is vinous, with hints of rosÃ© or clear, colourless white wine. Some mild berry notes come through along with a twang of lactic acidity. It's a bit flat and dull, overall, which is something of a shame.

Flavour is a little better: light crisp entry, with hints of pinot, and a light, mild lactic wildness towards the mid-palate. There's not much in the way of berry, although it is "beery": there's a slight grassiness which gives it a rather generic tone. Puckering acidity builds towards the finish, leaving a very brusque aftertaste that lingers slightly too long.

Is it too young? There's something a bit too raw about this, as though it hasn't integrated all of its elements properly. Needs some more smoothness.

(I was tossing up between having this or the Apricot... I was disappointed I tried this one...)

On-tap at Cascade's Barrel Room in Portland, OR.

Pours a candy-like red-blue hue with some slight haze and a solid weight behind it. Head is firm, slightly filmy ring of white. Looks solid enough all up, although there are detracting things about it.

Aroma: well, blueberry... Blueberry, blueberry, blueberry. Very pronounced and strong, and not all that complex. No, I lie: there are characters of rosÃ©, and a clean, fresh brightness to it beyond the pips and pith of blueberry skin, along with an apparent tartness. Pretty light and clear overall, and not overwhelming.

Light, clear entry as well, with some sharp acid developing into a cleanness mid-palate that swoops into earthier territory later, giving blueberry skin and a clean, light finish. It's a bit less complex than I expected, even though the nose didn't suggest huge complexity. The feel, which is very light, doesn't help.

Overall, though, it's a drinkable and pleasant brew. The crisp acidity is not overwhelming, and it's smooth enough and bright enough to keep it interesting. I think it was one of the low-lights of the visit, however.

Had on-tap at the Cascade Barrel Room in Portland, OR.

Pours a very clear golden colour, with striking clarity. Some ringing, patchy lace is pretty much all that exists of the white head. No visible carbonation. Solid, but not inspiring.

The nose is gorgeous, however. Vinous, bright sauvignon blanc characters give a clean, pickled acidity. Gooseberries, passionfruit all laced with a slight earthiness. Very impressive. It's not all the complex, but you just want to keep inhaling it nonetheless.

Light, acidic sparkle on the front gives a clean crisp entry, before the middle gives characters of gooseberry, sharp, bright herbs and a hint of chlorine. Clean finish with a light citrus overtone. Despite the acidity and sparkle, it feels really smooth all over; so much so that it almost feels like its defining characteristicâthe feel is creamy. It's odd for a wild, but it works.

Really nice drop this one. Like many of the others, the acid builds up after a while, but the smoothness holds this in check for longer than some of the others. Still, this is another impressive beer in an amazingly impressive range from Cascade. This was the last I tried on my visit, and it left me with the impression of having experienced a truly remarkable place.

On-tap at the Cascade barrel room in Portland, OR.

Pours a clear, bright golden colour, with a hazy, light-weight body. Head is white, and forms some firm, frothy contours atop the beer. Looks decent.

Aroma is immediately dusky and bretty. Apple characters with sharp citrus, astringent bite and a slight vinous tone. Not a lot of straight oak. It's perhaps not as big as it might have been, but it's still very complex.

Light grape juice on the front of the palate melds with more citric bite. Mid-palate has a husky bone character, giving a crisp, pronounced but rather plain Brett note. Finish is clean and dusty, with a ping of acidity that resonates to an aftertaste of pear skin.

The acidity is a little hard to take after a while, meaning it feels somewhat unbalanced. Despite this, it's a good wild ale, and one worth seeking out.

On-tap at Bailey's Taproom in Portland, OR.

Nose is smoky but sweet, with a touch of acid and funk. Yep, that's a delivery of pretty much what I wanted from a smoked Saison. It's organics, huskiness and green-tinged acid, all with a sweet coherent smokiness over the top. Good stuff.

Light entry on the palate. some floral organics start up with a crisp, green, sharp fragrance, layered with smoke and funk. It's pretty light overall, but it really delivers on its promise. Light but rounded and classy feel.

Yeah, this is really good stuff. It's bright, light and drinkable, with genuine interest. It almost makes you think it's actually just weak and light given it's so drinkable, but the complexity is there.