Taste is fruity; sweet and kinda tangy. Some light grainy notes that then get pear, largely, with some veiled citrus notes, guava and peach notes. Somewhat tannic towards the back, with that fruit character taking on a slightly minerally tone, sort of citric bitter but quite metallic too. Feels a bit chemically bitter like it's lacking in a bit of nuance, and doesn't have the roundness that a typical hop bitterness might produce. Yeah, a bit minerally and earthy ultimately. Can't say I love it.

Thin-seeming but substantial. Has a slight sharpness but a good fluidity so it doesn't seem excessive.

Some nice hoppy characters but just feels a bit washed out, with the malt base kind of lacking in the way it can both balance and ground a beer. This seems to have gotten a bit out of flavour control so it's hoppy without the right profile.
appearance: 3.25 | aroma: 3.75 | taste: 3.0 | feel: 3.5 | drinkability: 3.0
Conquista (Cigar City Collaboration)
6.5% American IPA from Coronado Brewing Company
Overall:
64 / 100
(Solid) 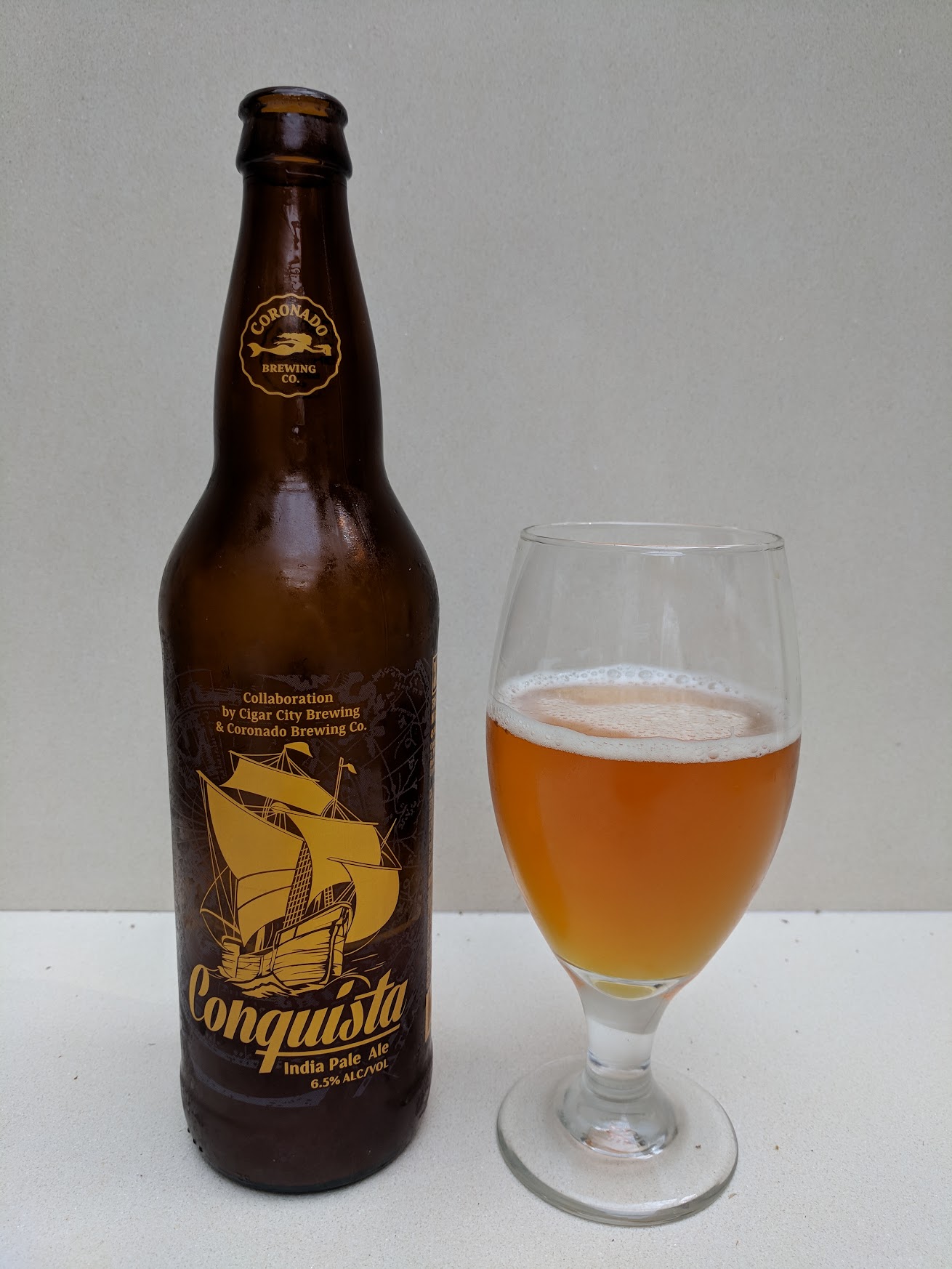 Pours a very clear, deep golden colour, with a mesh of fine white bubbles for a head. Lacing forms in large jagged patterns down the glass. Carbonation is fine and swift. Body is light and glossy.

Nose is interesting. It has a kind of rough herbaceous character to it, but it almost turns fruity, with aromatic characters of jalapeño and pineapple. It's a little thin though, and it doesn't have the strength of sweetness that would really carry the fruit characters to new heights.

It's a little thinner on the palate, again belying the lack of sweetness. Here the flavour trends more towards orange barley sugar boiled sweets, with a light effervescence on the back which connects more with that herbal, grassy character. Finish is quite dry.

Feel is very light, and prickly with fine carbonation.

Overall, it's fine. It's not a very exciting brew, and I was perhaps hoping for something a bit better from the collaboration. Still, this bottle has a couple of months age on it, so it's believable that it's just past its prime.
appearance: 4.0 | aroma: 3.75 | taste: 3.5 | feel: 3.25 | drinkability: 3.5
Blue Bridge Coffee Stout
5.4% American Stout from Coronado Brewing Company
Overall:
60 / 100
(Decent)
22oz bomber shared with me by @LaitueGonflable. I believe I may have given him the bottle originally, but I can't remember where I bought it from, if so.

Pours fairly dark, solidly brown in the body, but thin at the edges. Body is fairly thin. Head forms a bubbly faint ring around the edge of the glass, in a faint beige hue. Lace forms only in specks. Looks decent, no better.

Nose is great though. Lots of brewed coffee characters, slightly sweaty, but bitter with roast notes. Pleasant and bright, perhaps a very faint hint of sulphur, but it just adds some complexity. Light but very pleasant.

Light clean entry on the palate, with a slight spice character. This mellows into more roasted notes on the mid, but it's really lacking solidity, and the coffee just feels a bit reedy by this point. Finish is a little crisper, and has a touch of roast.

Feel is a bit weak, which underlines the thinness of the mid and back palate.

Overall, it's quite drinkable for its weakness, and it's pleasant enough overall. There's certainly at least some interest there. It feels a bit like it's neither committing to being light, nor is it being really rich. One way or the other and it'd be very good.
appearance: 3.5 | aroma: 3.5 | taste: 3.25 | feel: 3.0 | drinkability: 3.75
Blue Bridge Coffee Stout
5.4% American Stout from Coronado Brewing Company
Overall:
72 / 100
(Very Good)
Pours a very dark brown; head is a bit lacklustre: beige, rim of small bubbles. Lace is a bit thin and bland.

Taste is similar to other coffee stouts I've had. Sweet, with caramel malt, touch of roast but swimming in a bit of watery malt base. Bit of spice and a touch of espresso at the back, but subdued. This coffee seems nice enough, it could totally dominate the palate and I'd be on board.

Not a bad body. Bit thin, but fair amount of texture. Good presence.

Smells a little bit... weizeny? Plenty of apple notes to it with a hint of banana, caramel and corella pear. Not much else, really, mostly a weak fruit aroma. Definitely lacking in character and complexity.

Taste has malts that the nose just doesn't have. Still has that mild, weak cidery ester on mid-palate but starts with nice, toffeed malt, developing rich peanut and salted caramel but doesn't quite cover the bland appley notes midway which do turn into enjoyable enough hop flavours but not really big or bold enough for my taste. Yeah, not bad, good characters for red ale, just not enough, feels a bit lacking.

A bit watery in the mouth, but feels fuller as it goes down. Not bad; not great.

Yeah, can see what they're going for and at times it seems they've hit it, and at others it feels like a big miss. Decent, though. Certainly drinkable.
appearance: 4.5 | aroma: 2.5 | taste: 3.5 | feel: 3.0 | drinkability: 3.5
Red Devil
9.0% American Strong Ale from Coronado Brewing Company
Overall:
55 / 100
(OK)
Called an "Imperial Red Ale" on the label. This one was purchased from Berkeley Bowl in Berkeley, CA. Brought back in my luggage to Sydney and shared with @LaitueGonflable and @tobeerornottobe.

Lovely colour, a bright ruby red hue, genuinely red almost like a light pinot noir or a deep rosÃ©. Head is pocked with large bubbled, forming an off-white mesh on the top of the glass. Regular persistent lacing however, forming a pleasant frieze over the top of the beer. Looks very nice.

Nose is a bit disappointing to be honest. Clear hop fragrance comes through, but it is overridden by a rather strong apple sweetness, giving green appleskin tartness to the mix. This is also matched with a rather potent alcohol sharpness, and a hint of something spicy, almost like cinnamon. It's an odd aroma, and doesn't really match nicely with the style.

Taste is similarly lacklustre. Thin reedy palate, without much body, depth, or hop character. Instead, there's the sharp bite of the booze, and a mild sweet apple note. Some bitterness comes through on the back, but without the body or substance, it doesn't have much to offset.

Feel is incredibly weak. Actually rather impressive for a beer of this ABV, but it slips through the palate without giving any weight or substance.

This was a pretty big disappointment for me. I can't believe how lacking in flavour this was. It's like a pale shadow of a good American Red Ale. To call it "Imperial"? Bah, humbug.

Pours a burnished golden colour, with very fine white bubbling forming the head. Lacing is firm and fine, leaving intricate patterns down the inside of the glass. Body is firm and holds fine static carbonation. Lacing is great, the body is bright and sharpâoverall it's a great looking beer.

Heavy and smooth nose, rather sweeter than I expected, with just a splash of bright hops to leaven it. Even then, it's only a character of pepper or basil, perhaps a touch of candied orangeâthe only thing which really drags this out of its heavy, sweet faineance.

Taste is very smooth, with almost no bitterness, except a very slight zesty character on the back. Very sweet, with honeyed grain coming through strongly, and a big malt presence the basis of the beers as a whole. The finish, when it comes is slightly bitter with a resin finish, but it doesn't do enough, in my opinion.

It's a tasty and drinkable brew, but it's missing something. However, it's easy enough to drink, despite the heaviness.