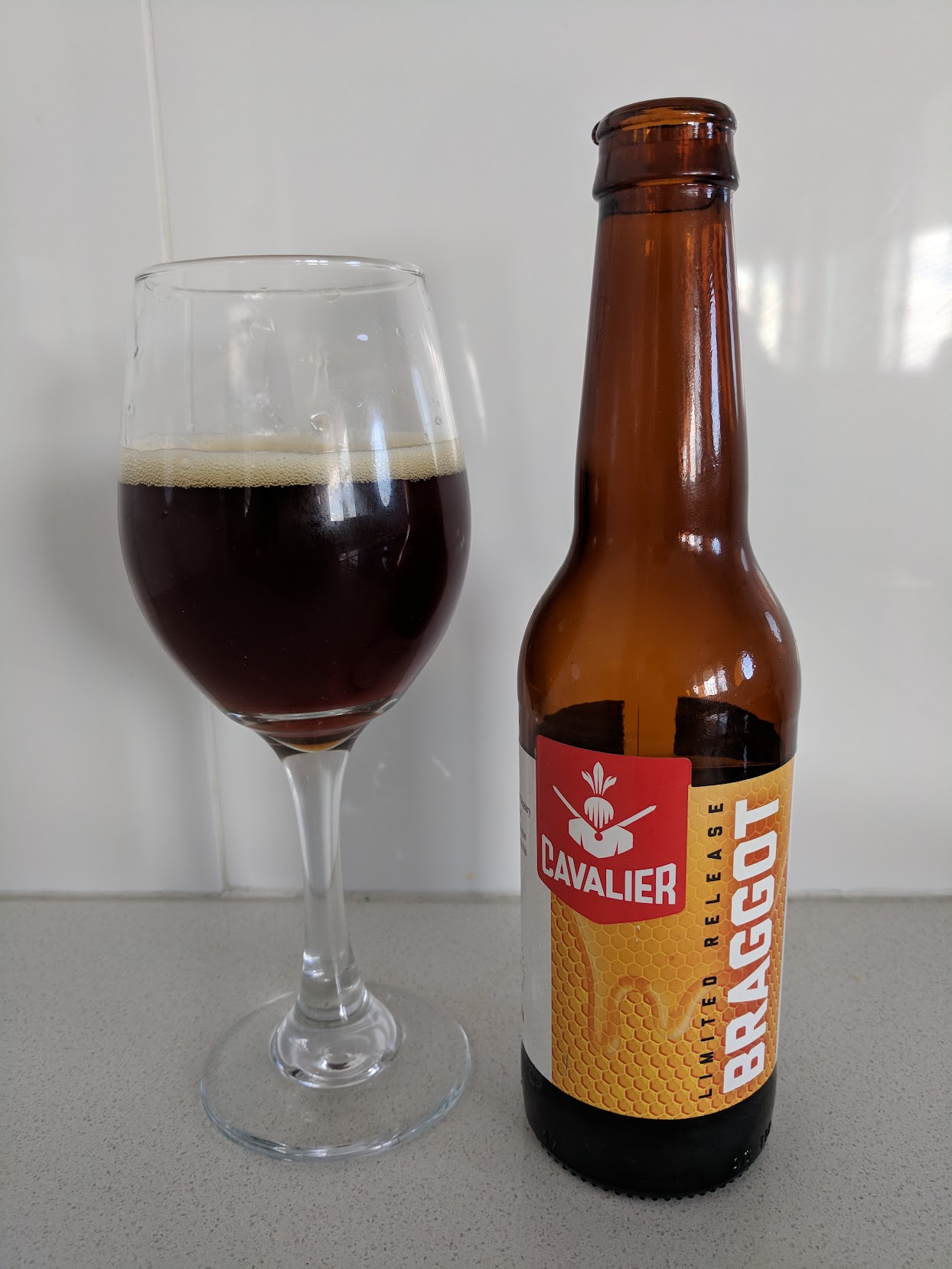 Pours darker than expected: a deep mahogany red-brown, with a flimsy head of off-white that nonetheless promotes some streaky lace. Carbonation is rife, with chaotic streams whirling away when the glass is tilted. Body is also extremely light. For almost 7% ABV, I'd expect lighter, but I fear the honey has fermented out to nothing.

Nose is metallic and a little thin. There's a coppery undertone to everything, that's then just laced with the other characters. I get some clove and a little sharp, aniseedy booze. There's also a permeating suggestion of clipped grass over everything. It smells all a bit lacklustre,and not well-integrated anyway.

Taste is also not great. It's really very thin, and that metallic character gives it a slightly weird acidity. It's coppery in the same way that your mouth is after a pretty serious chunder. I suspect the honey ferments out to almost nothing.

Feel is insanely thin. It's almost watery, and doesn't allow the characters much chance to express themselves.

Nah. I think I'm genuinely still to have a great braggot, and this is certainly far from being a great braggot. The honey just makes it thin and uninteresting. There's just nothing else really going on.
appearance: 3.5 | aroma: 2.75 | taste: 2.25 | feel: 1.5 | drinkability: 2.5
Irish Spiced Red IPA
6.1% American Amber / Red Ale from Cavalier Beer
Overall:
47 / 100
(Not Great)
330ml brown bottle purchased from Slowbeer.

Pours a beautiful ruby hue, very faintly hazed, but brilliantly deep red. Head is a fine, if minimal crest of pale beige, leaving specks and streaks in its wake. Carbonation is fine and vivacious. It looks very good.

Nose is interesting. There's definitely a spicy character, but it's not overwhelming. Instead, we get subtle layers over a firm malt basis, that works with the nuttiness of the malt, with vanilla, a little melted butter, perhaps some sweet cardamom, anise and a hint of menthol. But overall, I'm not a huge fan: there's something disconcerting about it, and the flavours don't necessarily mesh that well together.

Taste is rather similar: in fact, there's a slight emptiness to the back, which puts more of the spice characters in the spotlight. Here they seem a little listless; as though there's not really a reason for their presence. In the front, we have that nutty malt, but with the body dropping out, this turns slightly bitter and dark, leaving a slightly unpleasant aftertaste.

Feel is rounded on the front, but quite empty at the back, with a sharpness from the spice. 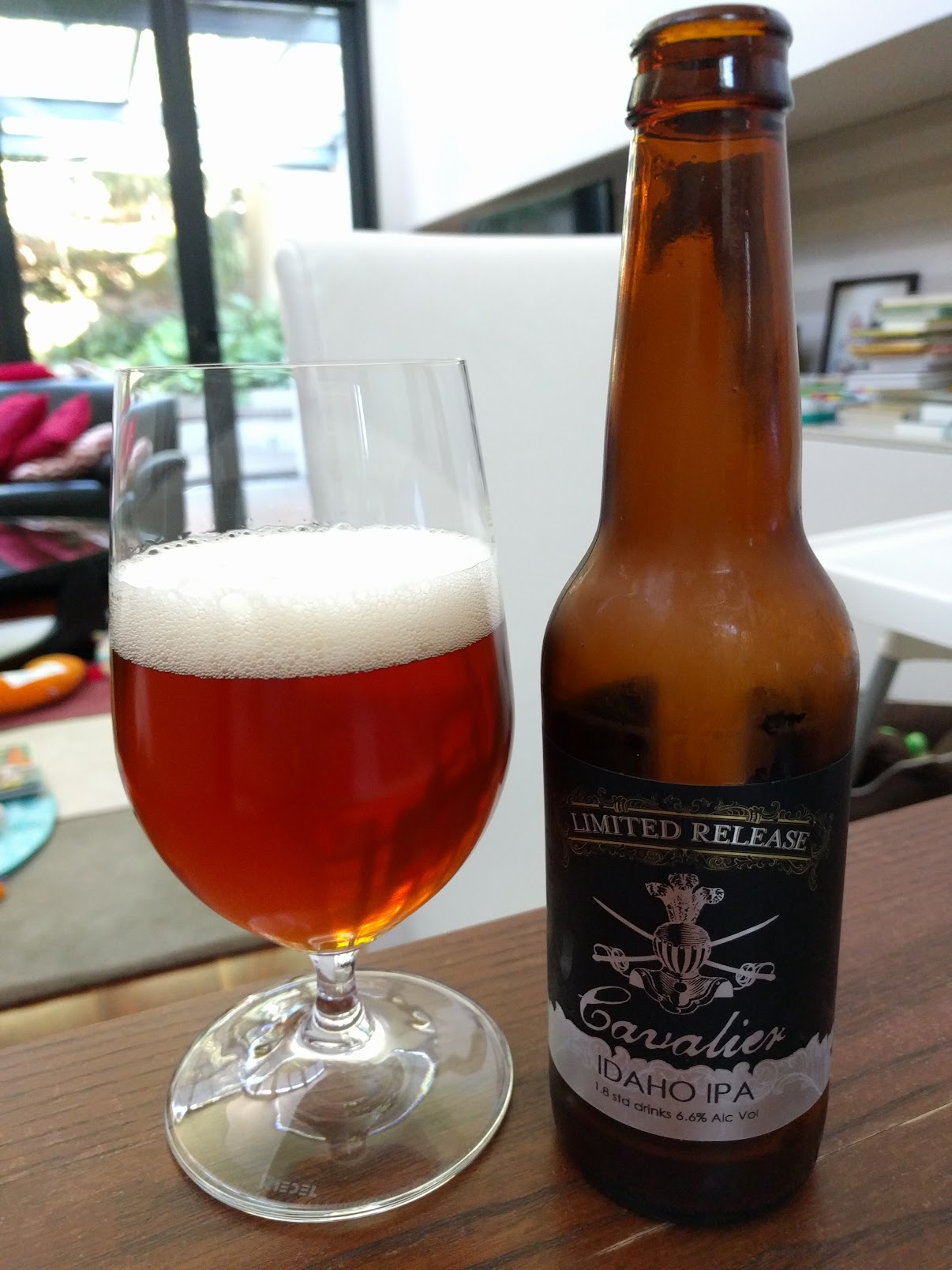 330ml brown bottle purchased from Slowbeer. No brewed date on the bottle, but this was apparently released in May, so it's likely about three months old.

Pours a surprisingly vivid orange amber hue, with great clarity. Head is a slightly frothy, off-white crest that leaves a few spidery streaks of lacing. Body looks a bit light, but it has nice fine carbonation when tilted or swirled. Looks good.

Nose is very pleasant. Sweet fruit characters, lining up dried apricot and mandarin, with a mild crushed vegetation/grassiness underneath. Surprisingly little malt coming through, but perhaps a touch of crushed grain mingles with the green vegetative character. It's nice.

Taste is pretty solid. There's a tight bitterness from front to back which blossoms into more of those mandarin characters through the centre. There is definitely a lack of malt character though, which leaves it feeling a little pinched towards the back, and causes the finish to be rather short. This is, of course, excluding the bitterness which peters out in a long, bitter-greens line in the aftertaste.

Feel is pretty light as well—it makes it easy to guzzle, especially with a restrained carbonation, but a bit more oomph would probably balance it a tad more.

Pours a dark, dark brown colour, slight haze in it and pale at the fringes. Head looks nice, thick and foamy and beige. Good retention. Like a stout should look if only a little pale.

Smells complex and interesting. Red wine oak, with some dark fruit notes - raisins mainly, as well as some light spicy touches, pepper and cinnamon in there. Could use a bit more oomph from stoutiness or from the oak, it actually smells a little sour and weak.

Taste is far more pleasant, it ratchets up that oak character in a big way as well as delivering more of that stout character which the aroma was lacking. Huge vanilla awesomeness, with notes of spice - pepper mostly, and some vinous characters giving off sweetness and booziness in equal measure. Chocolate, vanilla, red wine. What's not to love?

Body is full and pleasant. Not gluggy or syrupy but a substantial stout texture.

Very good beer. As I tend to expect from these dark horses of the Australian brewing scene. 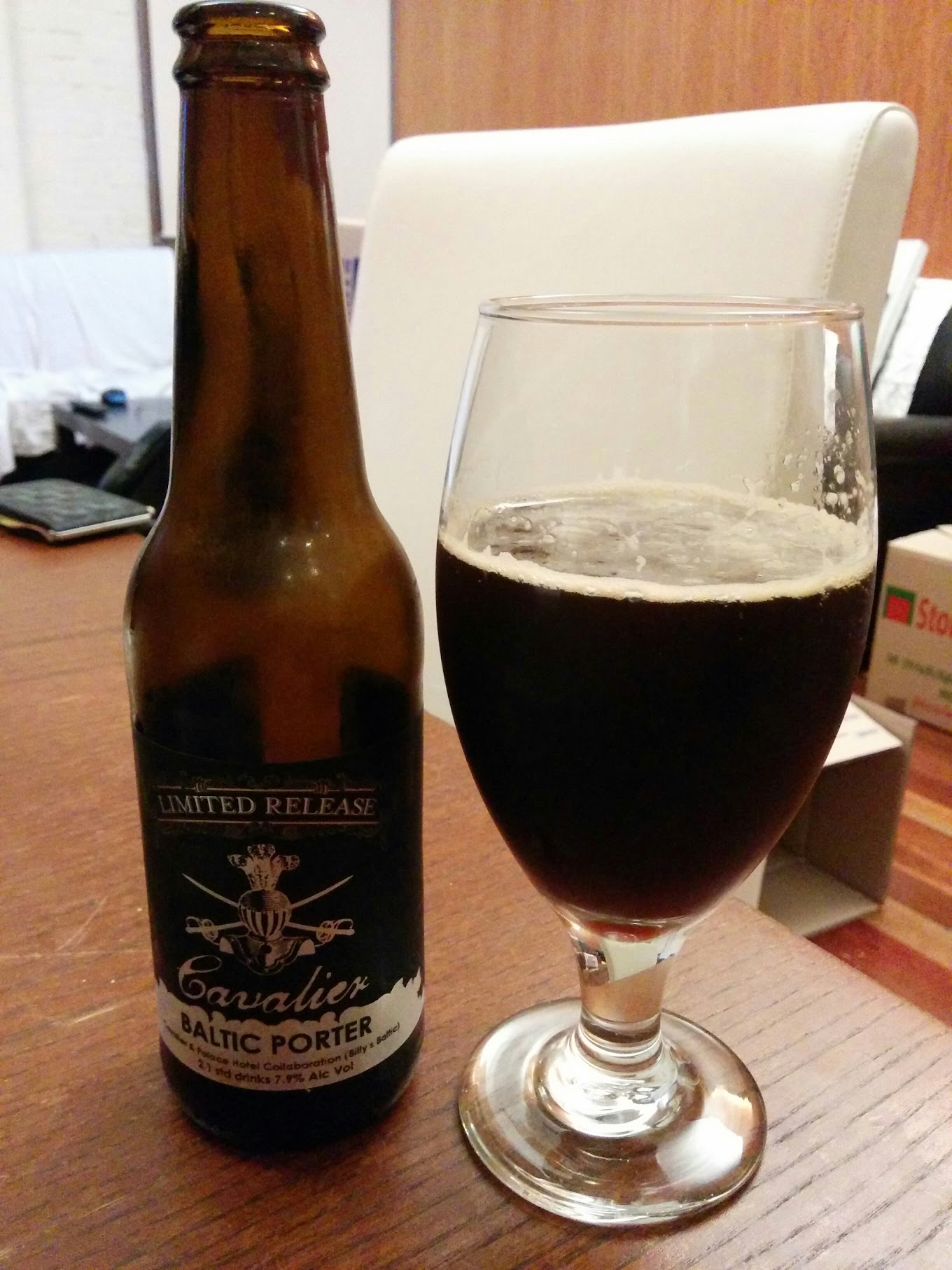 330ml brown bottle purchased from Slowbeer in Melbourne. This is a collaboration between Cavalier and the Palace Hotel.

Pours a rather weak mocha-brown colour, which is definitely rather light at the edges. Head is a mild tan, forming a foamy crest to begin with, but which crackles itself out to a thin film. Lacing forms in minor specks. Body is surprisingly light and the carbonation is rapid. Genuinely, I'm a little unimpressed.

Nose is also a bit weak. Thin, cereal graininess comes through along with a hint of sharp pungent coffee that evaporates fairly quickly. As it warms, there's a more rounded, russety tone of mixed grains that lends a bit of body and a suggestion of sweetness. But still, it's a bit underwhelming.

The trend continues onto the palate. There's a lightness here, possibly from the lager yeast (assuming it's made to style), that leaves the back palate almost empty, and without any type of linger to add interest to the aftertaste. Towards the front, it's more of that bland steeped grain character, with just a flick of some kind of dark fruit as the rest of the flavour evanesces. The feel on the front is okay—it has a little body to it that helps round things out at least.

Overall, I'm genuinely not a particularly big fan. It's not a bad beer, by any means, but it is a fairly uninspired one, and doesn't really do anything particularly sui generis. Indeed, it's not even a stalwart exemplar of a Baltic Porter—there are certainly examples out there that are both more interesting and more generic.
appearance: 3.0 | aroma: 3.25 | taste: 3.25 | feel: 3.25 | drinkability: 3.25
Cavalier Brown
5.0% American Brown Ale from Cavalier Beer
Overall:
74 / 100
(Very Good)
Tried at the Sydney Craft Beer Week launch party; my reviewin' app says it was on tap but I'm not entirely convinced of that.

Taste is more roasty, quite bitter but still very decent chocolate notes, some vanilla and almond marzipany notes. Some orange peel on the back. Touch of coffee on the finish. Yeah nice roast, chocolate, fairly smooth and creamy. Not seamless; there's a bit of bite but nice and pleasant.

Smells roasty, chocolatey, quite sweet. Bit of a byproduct of heavy fermentation. Quite ethanoic, but yeah, just a thorn in the side of an otherwise very pleasant stout aroma.

Full but a bit boozey. Maybe not as full bodied as it could be. Bit sharp on the back.

From the start, this looks the part: deep, black and dark, almost opaque. Solid, slightly frothy head formed of large brown bubbles. There's some decent, but not intense weight behind it. Minimal carbonation, but what forms is fine. Looks good.

Nose is a little milder than it could be, but there's definitely pleasant notes behind it. Toasty vanilla, slight mild roastiness and a hint of coconut. Some chocolate comes through with a cocoa character dominant—it's dark rather than rich and sweet. Pleasant, but a bit milder than it could have been.

Taste is smoother, with the vanilla coming through more strongly, creating a creamy roast character and a hint of fruit. Cherry chocolate comes through on the finish, dark and broad with pip and stem fruit characters on the back, and a slight reminiscence of dried apricot. It's really nice and very interesting and flavoursome.

Feel is smooth and pleasant, which helps integrated the flavours. Lovely.

Yep, this is grand stuff. The fruitiness that comes out above the dark roasted basis is very fine indeed, and creates a lovely strange interest out of the brew. Great beer.

Pours a pleasant deep brown port colour, with a slightly fizzling bubbled head of yellowish-white. This dissipates almost immediately, leaving just a fuzz around the edge of the glass. Looks pretty flat by the end of it. No visible carbonation or lacing.

Nose is a pleasant nutty brown. Smooth and warm, without going to far towards roasted or astringent. There's a pretty strong sweetness mingled with a slight aniseed bite to pull it back. It's pleasant enough. Solid, dependable stuff.

Taste is similar enough. Smooth, mildly nut roast characters, without a true darkness. Some light coffee flavours and a bite towards the middle and back that cuts through everything. Strangely enough, there's not much sweetness here, but the nutty basis provides some breadth to the palate at least. Feel is clean and light.

Solid enough stuff. It has some of the classic brown characters—the nuttiness, the very mild roast, and some of the smoothness on the nose. It's nothing extremely exciting (even, I'd say, if you regularly get excited over Brown Ales), but it's easy to drink and smooth enough.

Had on-tap at Biero in Melbourne.

Pours very clear, a pale light golden colour with the merest of mere hints of haze. Head is fine, a ring of decent frothy white that leaves moderate lacing. Lots of carbonation, but it streams through the body so quickly. I'm a bit underwhelmed.

Nose is full of banana esters, but thinly so, without any body or heft to back it up. A bit of crisp wheat acidity gives touches of soda stream to it. It's all a bit inspid, like artificially sweetened banana candy. Eh.

Taste is similar. Very thin body, but with the sweet, slightly cloying and unsatisfying banana character. Back sticks around too long with a touch of mouldy or overripe organics. Finish is rife with that soda water character. Banana is certainly the main event here, but it's not particularly well done. Shame.

Not a good hefeweizen, and so, so far from the best examples. I was disappointed, especially given the other good reviews here.