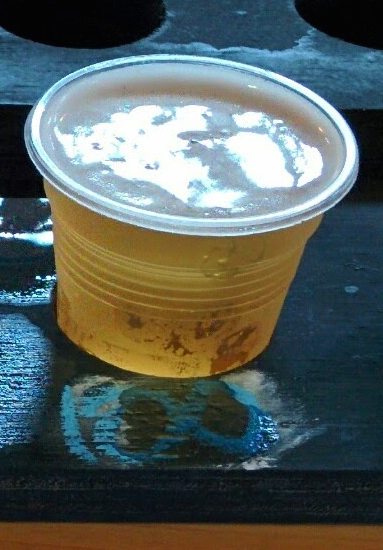 Tried on-tap at GABS 2014 in Melbourne. This was a collaboration between Thunder Road and Yoshi Kurasawa, a cocktail expert from Tokyo, and infused with Japanese botanicals.

Pours a very, very pale lemon colour with a tinge of green to it. Very clear and light in the body. Head is firm, forming a solid white crest above the beer that leaves a little streaky lace. Looks okay, but very, very light.

Initially, this had a big thunk of yeasty dankness, but once the botanicals get going there are things to enjoy in it. Sharp greenery and a suggestion of citrus. It grew on my after a while, but the initial impression wasn't good.

Light, clean entry on the palate lends itself to an almost lemonade sweetness through the centre. Brightness from the botanicals and the greenery lifts it so it doesn't get bogged down. Finish is zesty and dry, with a very clean, very light aftertaste. It's pretty decent by the end.

Eventually, I liked it, although there were a few wobbles along the way. While I had a couple of questions, I think eventually in answered them and we got a decent beer out of it. Not bad at all.
appearance: 3.25 | aroma: 3.25 | taste: 3.75 | feel: 3.5 | drinkability: 3.75
Hop Star Extra Pale Ale
5.2% American Pale Ale from Thunder Road Brewing Company
Overall:
60 / 100
(Decent)
Pours a champagney colour, white foamy head, sticks around alright. Looks like a pretty standard Australian pale ale.

Taste is more subdued. Again nice caramel malt base, with lots of tropical fruit notes, plenty of passionfruit and apple characters. Not much on the finish and certainly not a lot of bitterness. Bit tangy and quite pleasant, but ultimately a bit of a non-event.

Grain on the nose with a whiff of POR and a touch of green apple. Cereal; fairly bland, but not too bad for the style.

Taste gets a big adjuncty sweetness throughout. Maybe some proper grain upfront but the back tastes all of corn and rice with a sickly POR character to finish up with. Sweet, corny. Not good.

Mouthfeel is thin, with a slight tingle from carbonation. Not much other texture, I guess it's quaffable but feels very bland and uninteresting.

Very bland Aussie beer. Not too different from what the huge multi-nationals are churning out, so I can't really recommend this.
appearance: 3.5 | aroma: 3.5 | taste: 1.5 | feel: 2.0 | drinkability: 3.0
Richmond Pilsner
5.1% German Pilsener from Thunder Road Brewing Company
Overall:
24 / 100
(Awful)
Had on-tap at the Great Australasian Beer Spectapular. Marketed as a "New World Pilsener", which is a slap in the face to all the great Aussie and New Zealand pilseners out there. I'll be unforgiving in my review as a result.

Unfortunately, though. It starts off rather well. Clean, clear yellow body, with a firm solid white head. Streaming small bubbled carbonation adds some verve. Looks good, and very much to style.

Here, it's all downhill, however. Nose is bombarded with a weak but still offensive character of PoR, or at least the yeasty, earthy horror of CUB's generic makeup, along with an unpleasant countermelody of mint. Overall, it's a really bizarre and totally unpleasant experience.

Light green notes on the front of the palate give way very quickly to nothing more than fizz and more of that earthy, yeasty dryness that leaves a horrible aftertaste. Firm mouthfeel is perhaps the only upsideâwhile I expected it might be bland and empty, there's some rigidity to the structure at least.

Seriously? I really don't get what's up with Thunder Road. They just seem to brew really generic and really unappealing beer, and yet swathe it with the sort of marketing to appeal to beer geeks. I can't help but feel that they're doing the craft beer industry in Australia more harm than good by besmirching its good name with this swill.

"We do beer differently," they say. I say, "Bullshit."

On tap at Harts Pub.

Pours a pale amber colour, clear and metallic with head that is slightly too thin. Dense bubbles, nice trail of lace. Bit meh, but OK.

Taste starts decent, with a crisp lagery tang and hint of beery esters. Gets less pleasant later, with wet bready grain and yeast and a hint of honeyed oat on the back. Bit of a crisper lager note on the back, but a slightly heavy, sunken grain note lingers. OK, but yeah, quite bland.

Thin feel, bit of fizz but not too much. Again, OK.

Very uninspiring effort here, though not unpleasant. Needs more body, and something to cover the thin grain and pump some interest into this.

appearance: 3.0 | aroma: 3.0 | taste: 3.0 | feel: 3.0 | drinkability: 3.0
Scream Time Action Beer
4.5% Cream Ale from Thunder Road Brewing Company
Overall:
50 / 100
(OK)
OK, I'll bite: I like the name. Something of a confusing beer, however. The Local Taphouse (where I had it) classified it as a Cream AleâThunder Road goes no further than saying it's an "Action Beer", and that they've "thrown the rulebooks and style guides away".

Pours a very clear, bright golden colour with a fine but relatively insubstantial head of white. Good body and look to it. Not bad.

Nose is slightly grainy, with hints of green, sweaty organics. A bit of faint underripe honeydew melon. Very bland, but not unpleasant, again.

Taste is odd, with a woody funk of Pride of Ringwood, mingled with some softer notes of vanilla. Over all this is a strange meatiness of flavour, almost like rotisserie chicken. A slight cleansing bitterness comes through on the back, but it's slightly unsavoury, like a generic Aussie Pale Ale, or (god-forbid) macro lager. Clean enough to drink, but you feel a bit dirty doing so.

A rather inauspicious start for Thunder Road in my book. I hear tell that this was just a batch of beer brewed to test out their equipment. I hope their regular range is more exciting.