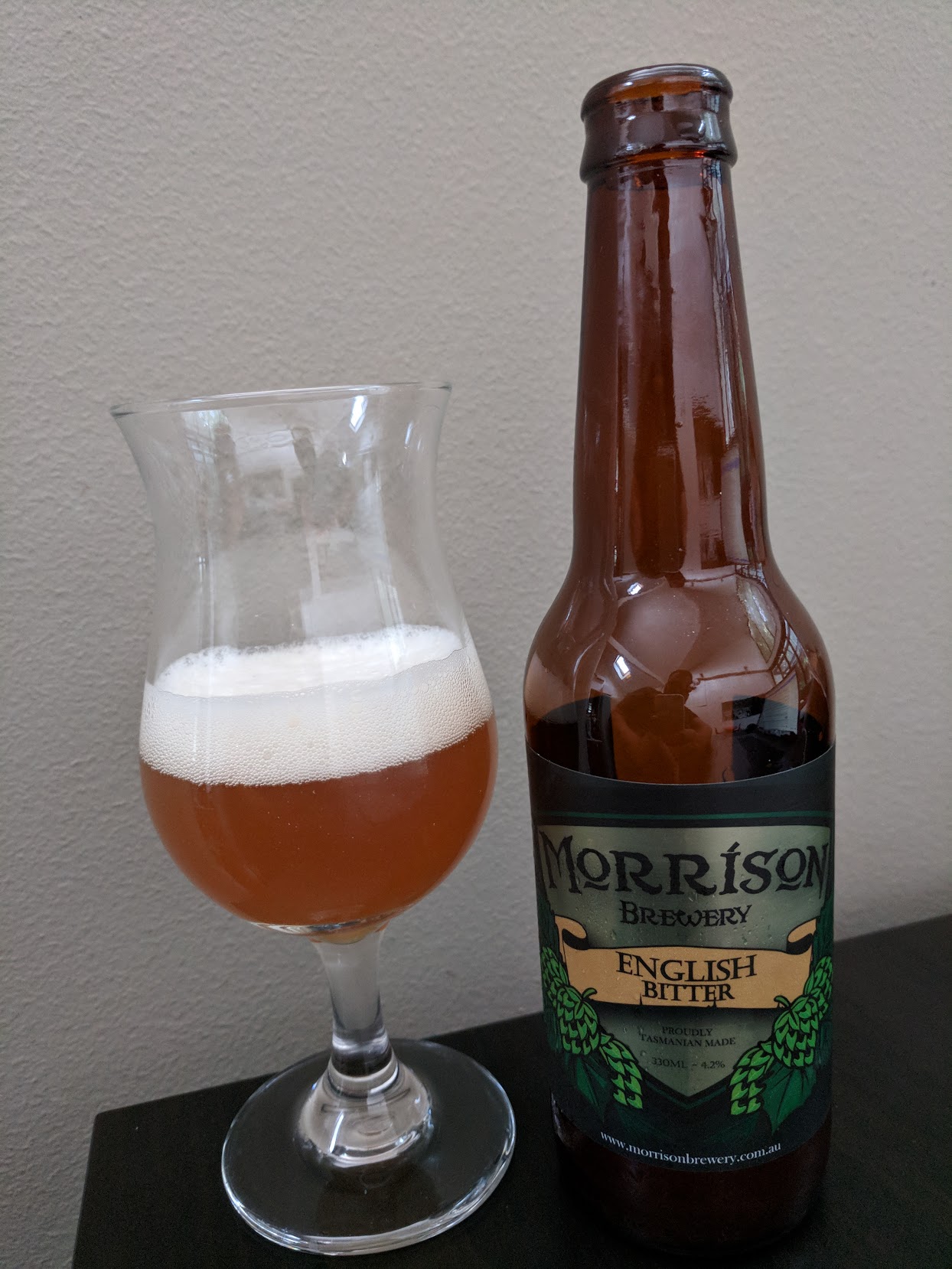 330ml brown bottle, purchased for me by Sam as part of my 2017 #fletchvent advent calendar. Reviewed blind, with my post-blind notes at the end.

Pours a fairly clear bright golden colour, with a frothy, coarse-bubbled head of white that flattens out to large bubbles around the rim of the glass. Minimal lacing. Carbonation is rampant and fierce. It has some questionable aspects, but mostly it seems pretty okay.

Nose is lagery, in a good way. There's a clean, dry, slightly dusty grain character to it, which has a pleasing brusqueness. It connects nicely with that hint of carbonic acid from the enthusiastic carbonation. It has just the suggestion of acidity as well, but not enough that I think it's actually sour. It's nice though.

Taste is very similar to the aroma, which I have to say is just a little bit of a disappointment. I was thinking the nose could have been clean, and the taste could have given me a nice twist. But instead, it plods along on the tried-and-true path. It's not a bad path: clean, bright, grainy with a touch of yeast on the back, and just enough bitterness to provide some crispness. It's a nice (I assume) lager.

Feel is actually a little too prickly with that carbonation. But it's suitable for the style at least, and it might just be due to this bottle.

Overall, it's a nice, clean, drinkable beer. I certainly wouldn't say no to a couple of these. Groundbreaking it is not, but there's plenty of scope for a beer like this in an advent calendar.

Morrison English Bitter. Well fuck me: that's actually a disappointment. I stand by the fact that it's clean and drinkable, but I honestly don't necessarily want that lager character in an English Ale. Indeed, it's almost the style of beer I least want to be anything like a lager. And the overt, aggressive carbonation is particularly bad if they were going for an English Ale. Nope: this is one of those times when the beer is fine, but the label on it just isn't.
appearance: 3.25 | aroma: 3.75 | taste: 3.5 | feel: 3.25 | drinkability: 3.75
Green Curry & Rice Saison
6.2% Saison from Morrison Brewery
Overall:
59 / 100
(Decent)
Brewed for GABS 2017; one of three 'green curry' beers at the festival. Tried there on tap.

Smells funky, with barnyard notes and a touch of champagne yeast character. Phenolic, too. Not a whole lot of curry but smells like a decent enough saison.

Tastes vinous. Vegetative, too, with some funky barnyard notes, some of that champagne kind of character and largely phenolic on the finish with a fair bit of bitterness. Again not getting a lot of curry but there's a distinct chilli note on the finish which kind of feels a bit incoherent from the rest of the palate. Otherwise a fairly non-descript saison.

Yeah a bit hot from that chilli spice. Decent body though, and a nice tingly carbonation which provides some good texture.

Decent drop but tastes like a saison-with-surprise-chilli rather than a curry saison, and I find it a bit disappointing as a result.
appearance: 3.75 | aroma: 3.25 | taste: 3.25 | feel: 3.75 | drinkability: 3.5
Hot & Sour
6.0% Chile Beer from Morrison Brewery
Overall:
70 / 100
(Very Good)
Honestly, this is another of those beers where I wish they'd just pick a style in the copy because it's otherwise impossible to categorised. Kettle-soured beer, inspired by Vietnamese dipping sauces and brewed with lime zest, coriander and Scorpion chillies. GABS 2016 beer. Tried there on tap.

Smells like hops. Fresh, fruity. Some caramel malt, mango and apricot abounding from the Citra hops. Not what I expected, but certainly not unpleasant.

Taste is a bit more nuanced and complex. Slightly tart fruit early on, with a mandarin and lemon character. Develops some yeasty notes towards the back, slightly organic and corporeal, then a little bit of heat on the back but not huge. Interesting drop, and more palatable than I expected. Hint: I expected to be drinking hot sauce.

The heat is felt on the texture more than tasted on the palate. Otherwise flat texture.

Pours a semi-clear golden colour, with a white head that forms a fine ring in the glass. Body has some weight to it and it holds fine carbonation. Lace forms in decent streaks. Looks pretty good.

Meaty, smoky and peppery on the nose, with a touch of vegetative hops suggesting more of a savoury tone. Notes of beef jerky and BBQed chicken. Slight touch of bay leaf even. I like it—it's like a rich, smoky stew or a fragrantly spiced open-fire BBQ.

Front of the palate is smoky, but bright and sharpened with a dose of pepper. More savoury notes through the middle and a mild fruity hop character that blends to give a mango-habanero flavour. The back is kicked with burn, giving a fiery chilli note that lingers into a tickle in the aftertaste, along with a clean bitterness and a linger of fruit.

Overall, it's really interesting and flavoursome, and the chilli is genuinely put to good use here. But it's really fiery, and does become a little painful after a while. If you like that though, this is definitely worth checking out. I had a full glass at the end of the festival, so that probably tells you something.
appearance: 3.75 | aroma: 4.0 | taste: 4.0 | feel: 3.75 | drinkability: 4.0
Smoked Chilli IPA
7.0% American IPA from Morrison Brewery
Overall:
74 / 100
(Very Good)
So precursor to this review: I'm reading my notes and I didn't review this beer well. Upon retrying this grew and grew on me and I appreciated it more and more, so based on more recent experiences I've revised what I wrote.

Smells smoky. Meaty and pleasant with not a lot of hopping. Touch of pine wood and maybe a slight chilli vegetative aroma. Not bad.

Taste is lovely and a bit uplift from the lack of hops on the nose. Caramel malt that gets fruity nice and early with apple and some tropical notes of passionfruit and peach. Smoke complements it beautifully and then chilli heat takes over in a wonderful way late. Peppery spice. Not bitter but that's fine because the chilli heat provides a sensory experience to take notice of.

Body is a little thin but a nice tingle from carbonation. Not bad.

I went into this beer originally with it being my most anticipated beer of the festival, and felt it delivered on its promise but no more. But retries, and two full glasses later, and I've reached the conclusion that this was a very tasty and very special beer, with chilli heat and hops balanced in wonderfully unexpected ways. This really should have been a top ten finisher for me, possibly even top five, but I didn't give it the attention it deserved.
appearance: 3.25 | aroma: 3.5 | taste: 4.25 | feel: 3.5 | drinkability: 4.25
IPAison
6.0% American IPA from Morrison Brewery
Overall:
56 / 100
(OK)

Tried on-tap at GABS in Melbourne. This is an IPA/Saison hybrid, so forgive the rather clinical categorisation into one style but not the other.

Pours a burnished golden colour with some hazing. Mid-weighted body gives it a little heft, perhaps what you'd expect for 6%. Head forms a fine ring of white film around the glass which doesn't leave much lace. Very fine carbonation. Looks pretty decent.

Nose is gritty with an earthiness underpinning everything. Some herbal hoppiness comes through marked with a peppery tone, possibly from the saison yeast. There's a slight medicinal quality that comes through too. It's interesting at the very least.

Light sharp entry on the palate, before that earthiness rumbles through. Spiky bitterness gives it more sharpness towards the back, while the yeast throws up random banana esters and Belgian yeast tones. Slight lingering peppery bitterness in the aftertaste. Feel is prickly and coarse.

Tastes similar, very bready and grainy. Touch of caramel on the malts upfront but then yeast takes over. Maybe a subtle touch of herbal hops on the back but mostly just sweet bread. Not great.