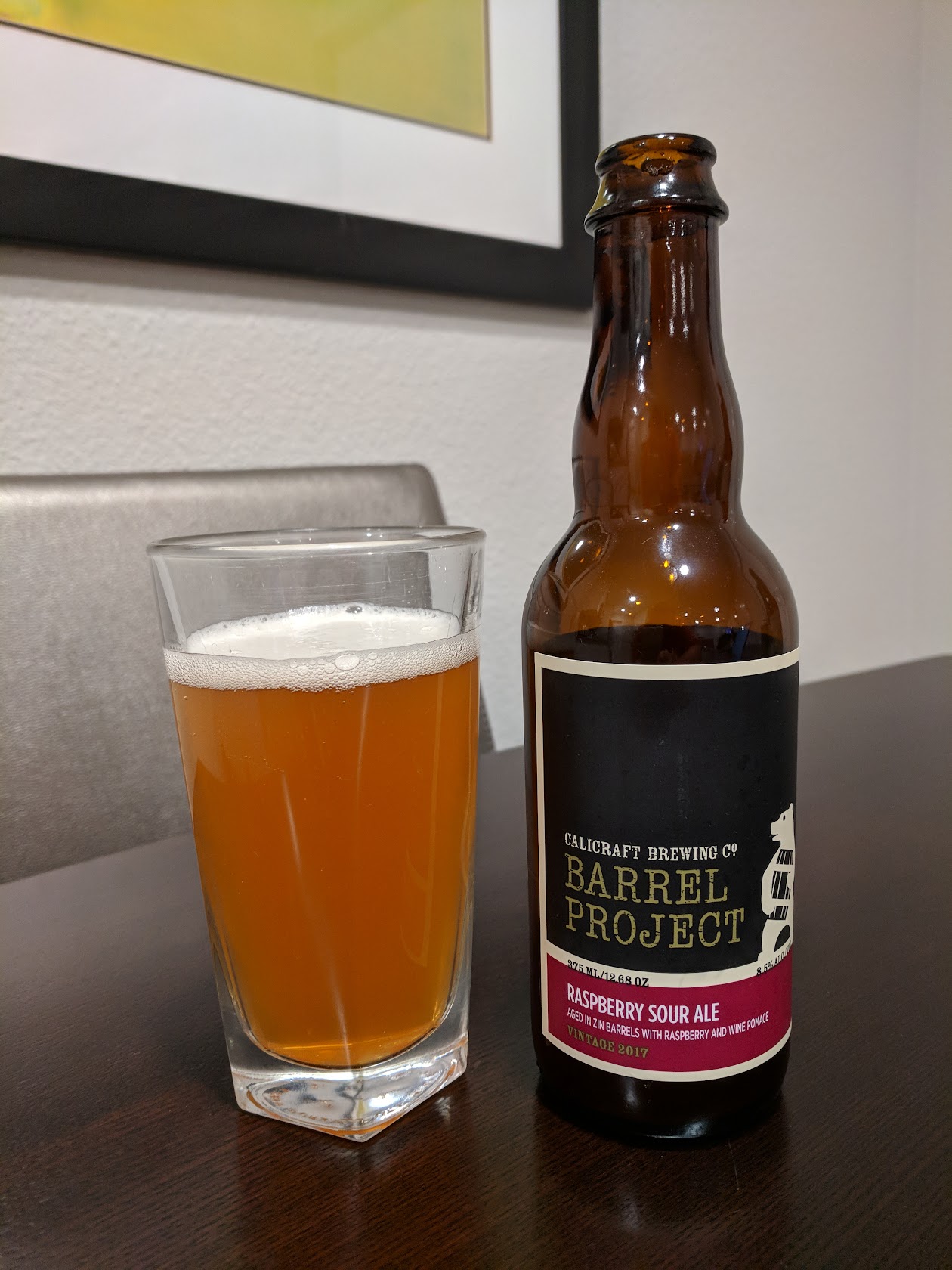 375ml brown Belgian-style bottle, capped rather than caged and corked. Purchased from The Willows Market in Menlo Park, CA.

Pours a pinkish tinged orange, with a fine and persistent head of off-white that leaves long streamers of lace. Body is fairly light, but the carbonation is very fine. Looks good.

Nose is pungent, in a good way. This is aged in Zinfandel barrels, and has raspberries and wine residue added to it, and you can tell. It's got loads of funky fruit to it, and plenty of sharp acid. It has undertones of carambola and peach, which are really just the hidden qualities of the must and squashed raspberries. It's really very nice.

Taste is really quite sour. It's controlled well though—it has a very prominent vinous acid, turning towards citric with elements of lemon and unripe orange. In the middle of the palate, the sour grapes and raspberries come through though, with a more direct fruit character that never separates itself from the tartness. Finish has a touch of mineral quality, almost salty from the intensity of the acid. It's pretty impressive.

Feel is clean, but slicing with that extremity of acidity.

Overall, I'm genuinely impressed. And I say this as someone who's been impressed with the general quality of Calicraft's beers in the past. But this is a step beyond. And this is a step into the realms of the kind of beers that will put them on the broader map. And I honestly hope they get there.
appearance: 4.0 | aroma: 4.25 | taste: 4.5 | feel: 4.25 | drinkability: 4.0
The Bay
8.25% Double IPA from Calicraft Brewing Co.
Overall:
73 / 100
(Very Good) 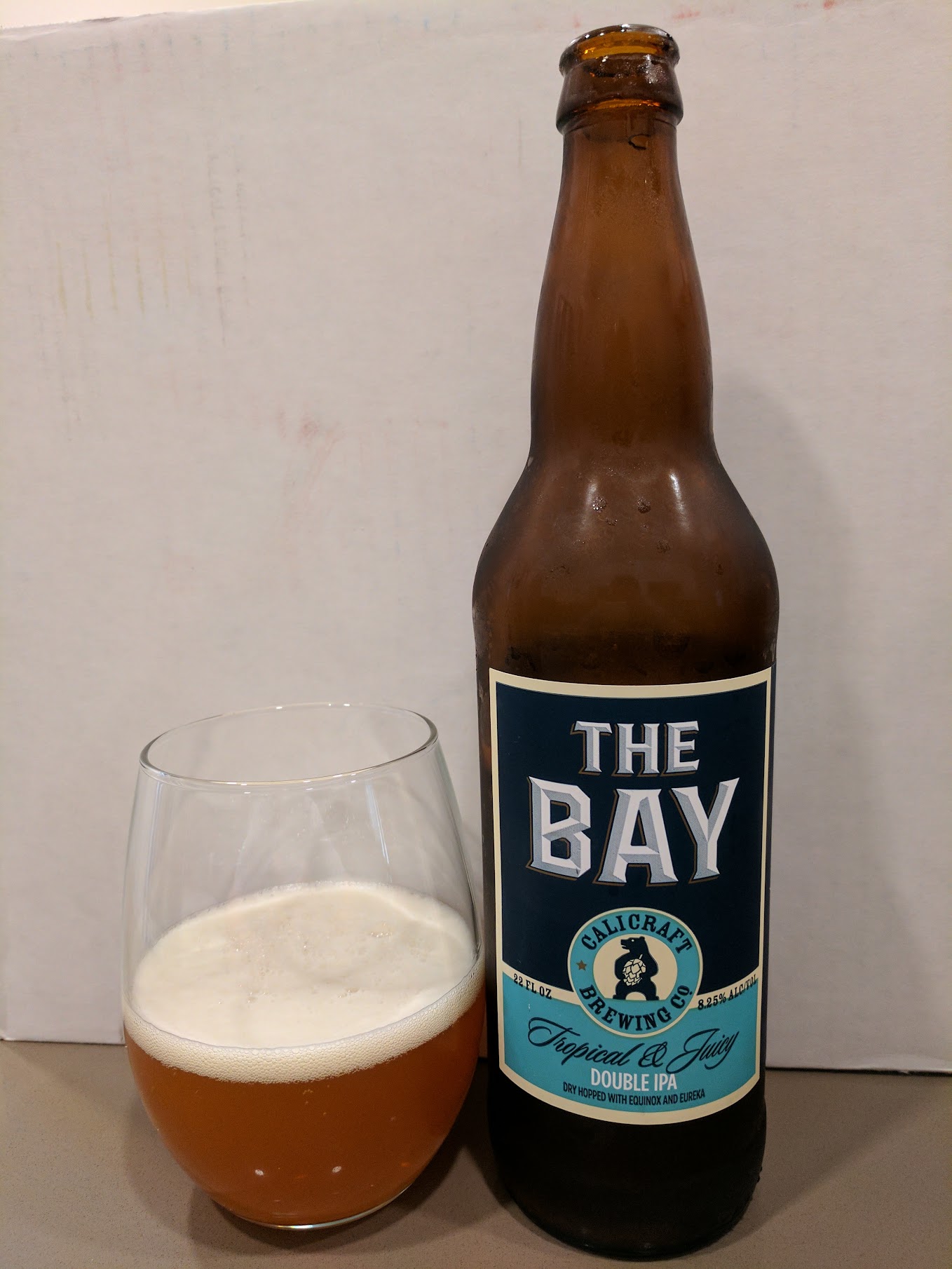 Pours a very cloudy orange colour, with a fairly large, but somewhat coarse-bubbled head of just off-white, that only persists as large bubbles around the edge of the glass. Lacing is minimal. Body is slick, with some weight, leaving very fine-bubbled carbonation when tilted. Looks decent enough.

Nose is very pleasant. Robust malt sweetness gives it weight and breadth, and then the hops are layered over the top. These are a little bit subdued, but they work with the sweetness to give characters of candied citrus and some bright, fresh thyme. It's nice.

Taste is pretty similar. The malt is smooth and clear, but it provides a nice basis for the beer. Hops sit pleasantly over the top, with more sweet herbal characters like lemon & basil. Peppery, sharper thyme notes are again noticeable, and the bitterness on the back connects rather pleasantly with just a hint of extra heat to warm and lengthen the afterpalate. It's good stuff.

Feel is smooth and long, adding the extra weight which works with the additional malt character to differentiate this as a true DIPA.

Overall, I'm really pretty pleased with this. Calicraft do the basics just really well. It's not the world's greatest Double IPA, but it doesn't feel like it's setting out to be. But you can trust them to be consistent, and to deliver what they promise. That's no bad thing at all.
appearance: 3.5 | aroma: 3.75 | taste: 4.0 | feel: 4.0 | drinkability: 4.0
The City IPA
6.4% American IPA from Calicraft Brewing Co.
Overall:
75 / 100
(Very Good)

Pours a very clear bright golden colour, with a big, frothy head of pure white that sustains pretty well over time. Lacing forms in messy streaks. Carbonation is actually surprisingly low, but it does form strands of bubbles when tilted. Looks good overall.

Nose is great, and very fresh. Big citrus pungency with the brightness of freshly snapped vegetation. Lemon and basil come through, along with a slight seltzer underpinning. Pepper also makes itself felt, mingling with the lemon in a zesty combination. It's really great stuff.

Taste is fairly clean, but the malt is a little bit sluggish, pulling down the hop character somewhat. This is still crisp and fresh, with more zesty lemon and a little medicinal bitterness on the back. But the flavour is certainly harmed somewhat by the sweetness, which comes out of nowhere (there was very little on the nose). It just makes it feel more bloated than it would be otherwise—but overall, it's still pretty good.

Feel is good. Smooth and sleek, with a crispness from the hops.

Overall, I really like it. This is a crisp, well-made IPA with a great aroma, and an overall flavour which really shows off the hops nicely. It's anchored a little bit to much to its malt on the palate, but otherwise, it's really well-crafted, and very tasty indeed. My bottle didn't have a brew date on it, but given how local it is I guess it's fairly fresh—and that's certainly the best way to have it.
appearance: 4.0 | aroma: 4.5 | taste: 3.75 | feel: 4.0 | drinkability: 4.0
Oaktown Brown Ale
6.7% American Brown Ale from Calicraft Brewing Co.
Overall:
76 / 100
(Excellent)
Pours a dark red, murky. Head is beige, bubbly. Pleasant enough, nice colour. Not spectacular.

Smells grainy, sweet, with a bit of roast on there giving a touch of coffee, caramel and vanilla. Quite sweet, malty. Decent.

Taste is more roasty, but plenty of that sweet vanilla flavour, caramel, particularly upfront, then finish is nicely dark, bitter territory. Smooth transition from sweet to bitter though. My kind of brown beer.

Bit dry at the back, leaves a touch of sandy tongue on the finish, but OK.

Pours a bright, clear yellow colour, with a full, persistent and rather rich head of white that stays around for quite some time. Lacing forms in large dots, quite persistently. Body is pleasingly fluid, but holds fine carbonation well. Looks good.

Nose is bright with crisp fruit of peaches and pears, and a slightly woody vinous character like oaky chardonnay. Some of the earthy, saison tones come through as well giving a slightly organic aroma with more wood and smooth sweet herbs. It's all quite rounded and well-integrated, making it seem very refined. Good stuff.

Taste is also quite refined and well integrated. Here, however, it makes the flavours seem slightly flatter: the fragrant, earthier notes are gone, leaving it smooth and drinkable, but leaving much less complexity. Some crispness on the back helps the palate from sip to sip: cleaning out the back from some of the rounder sweeter notes on the front.

Feel is good. Clean and light, but with a slight crispness towards the back.

Overall, this is a very well made saison with some classic characters wrapped into a very neat and coherent package. It perhaps doesn't have some of the most fragrant, flavoursome or intense characters that you can get from the style, but it's very solidly done—one of the better "classic" saisons I've had from the US.

Pours a very clear golden colour, with an initially frothy white head that settles down to merely a frothy ring. Lace is solid. Body is quite heavy, so it holds carbonation pretty fully, despite the carbonation being a little bit flimsy and coarse.

Nose has some rounded Belgian notes, mingled with some harsher alcohol characters and an Almost Adjunct sweetness. Slight smokiness comes through, although it's perhaps just the slightly savoury note that permeates it along with the cereal character. Overall, it smells a little bit like a Belgian beer done by a non-Belgian: the characters are there, but are not moulded into their correct proportions.

Taste is similarly styled. Big sweetness throughout and more body than necessary, but cut with a estery yeast character that also suggests higher alcohols—it feels inchoately boozy: I know it's only mid-range for a Belgian Strong, but it feels bigger than it is. The palate lingers long after it's necessary, with barley sugar and other cereal sweetnesses extending it beyond its welcome.

Feel is too thick. It needs something to cut through it, and everything seems to fall short of doing it, including the body.

Overall, I found this really difficult to get through. It was in some senses quite a generic Belgian Strong, but it had none of the finesse which makes the style often so good. Ultimately it ended up like a beer someone was trying out without really understanding of what makes it good.

This appears to have been renamed "Cali Cöast". I'm not quite sure why. 22oz bomber purchased from Berkeley Bowl West, in Berkeley, CA.

Pours a champagne-clear bright golden colour, with a coarse-bubbled head that settles to a filmy ring with a steady bead. Lacing is fine and delicate. Overall, it looks pretty sophisticated.

Nose is clean and light, with a pleasant German grain character coming through and some faint, green organic hops. There's a dusty, floury yeast character which comes through as well: it's not unpleasant, and it fits with the style, but it somewhat dampens the rest of the aroma.

Taste is light and clean, with a very nice crisp, lagery freshness from start to finish. Some green hops lift the back, providing a punctuation to the mild, crisp grain character, and giving some dryness to the finish. Clean aftertaste gives a real refreshment. It's light, balanced, crisp and supremely drinkable.

Feel is pleasant and light.

Extremely drinkable, and extremely well-made. This is a very nice, easy drinking beer, perfect for a Californian summer. It's not wild, it's not bursting with amazing flavour combinations: it's just well-crafted beer of high quality. Love it.

Pours a reddish deep brown colour, with a frothy and rather vibrant head of yellowish-white. Lacing is good. Body looks solid. No visible carbonation, although the body is pretty opaque, meaning it'd be hard to see it even if it were there. Looks pretty decent.

Nose is pleasantly rich, sweet and deep, with pronounced brown malty characters giving sweet biscuit and sugared oatmeal goodness. There's an organic, grainy kick to it, but it's just a lilt to the rich deep, sweet brown characters. Yum.

Taste is lighter, especially in the feel, but the brown, grainy goodness sticks around, with a mildly roasted character lengthening the palate to a dusky finish like toasted brioche. Clean grain for the most part makes it feel good and wholesome. It's very pleasant. Feel is perfectly suitable. Only mildly carbonated, letting the malt coast through the slickness.

Really nice beer, and an impressive first effort from this brewery for me. Tasty, well-made stuff.