Can exploded when opened. Head is hugely effervescent, taking up most of the glass and then dissipates to very little. Sparse webs, white. Cloudy body, pale saffron. Static bubbles on the sides. Not bad but the explosion was annoying.

Smells hoppy and pleasant. Fresh fruity, with citrus, passion, some red velvet icing too. Touch of cinnamon and pineapple sorbet. Fresh and pleasant. Touches of Belgium in there but could use more saisonyness. Still, nice.

Taste is better. But also distinctly grainy with a big Maris otter kind of character. Some hop notes on the midway with fresh but sharp citrus and some pineapple. Mild subtle Belgian phenols late-mid, but not a lot of oomph. Feels more like a fruit-tinged Belgian pale rather than a saison. Some herbs, but nothing really typically saisonyness. It's quite nice but not really to style.

OK body, touch of texture. For the size, quite impressive.

Pours a solid yellow colour, very hazy and quite solid in the glass. Head is white, forming into a fine persistent ring. Lace is sheeting and forms pleasant full rings. Small amounts of carbonation form when the glass is tilted. Looks pretty decent.

Nose is quite pleasant. Jammy apricot character cut back somewhat by a slight peppery spice. There's just a touch of acidity to it, but overall it seems a little underwhelming in that respect. Not bad though all up.

Light clean entry on the palate with a slight peppery note. Fruit comes through in the middle, with a slightly dull, thick and gooey quality to it that doesn't ever really get challenged by acidity or crispness. Back in the end feel faint, doughy and floury with a whimper in the aftertaste.

It's a shame in many ways, because there are certainly things to like about this beer. It's not bad, but it just feels uninspired after its first kick. Moreover, a beer like this really gets lost at GABS—it just isn't that interesting.
appearance: 3.75 | aroma: 3.5 | taste: 3.25 | feel: 3.5 | drinkability: 3.5
Abrigot Jammed Sour Belgian Ale
5.5% Fruit Lambic from Beavertown Brewery
Overall:
68 / 100
(Solid)
Pours a champagne colour, hugely cloudy with white sparse head, medium crown. Not bad.

Smells somewhat Belgian. Champagney edge with some green apple crispness and a fair whack of phenolic character on there. Not a whole lot but it's the dominant character.

Taste is also champagney, with some tart fruitiness - green apple freshness and a touch of grapefruit. Don't get a big apricot flavour, if I was meant to, but still a fairly nice, tart and crisp early-to-mid followed by a good phenolic Belgian finish. Again not sure of the style here but it's decently constructed.

Mouthfeel is great; bit of texture but good body to pad it. Feels like beer should. 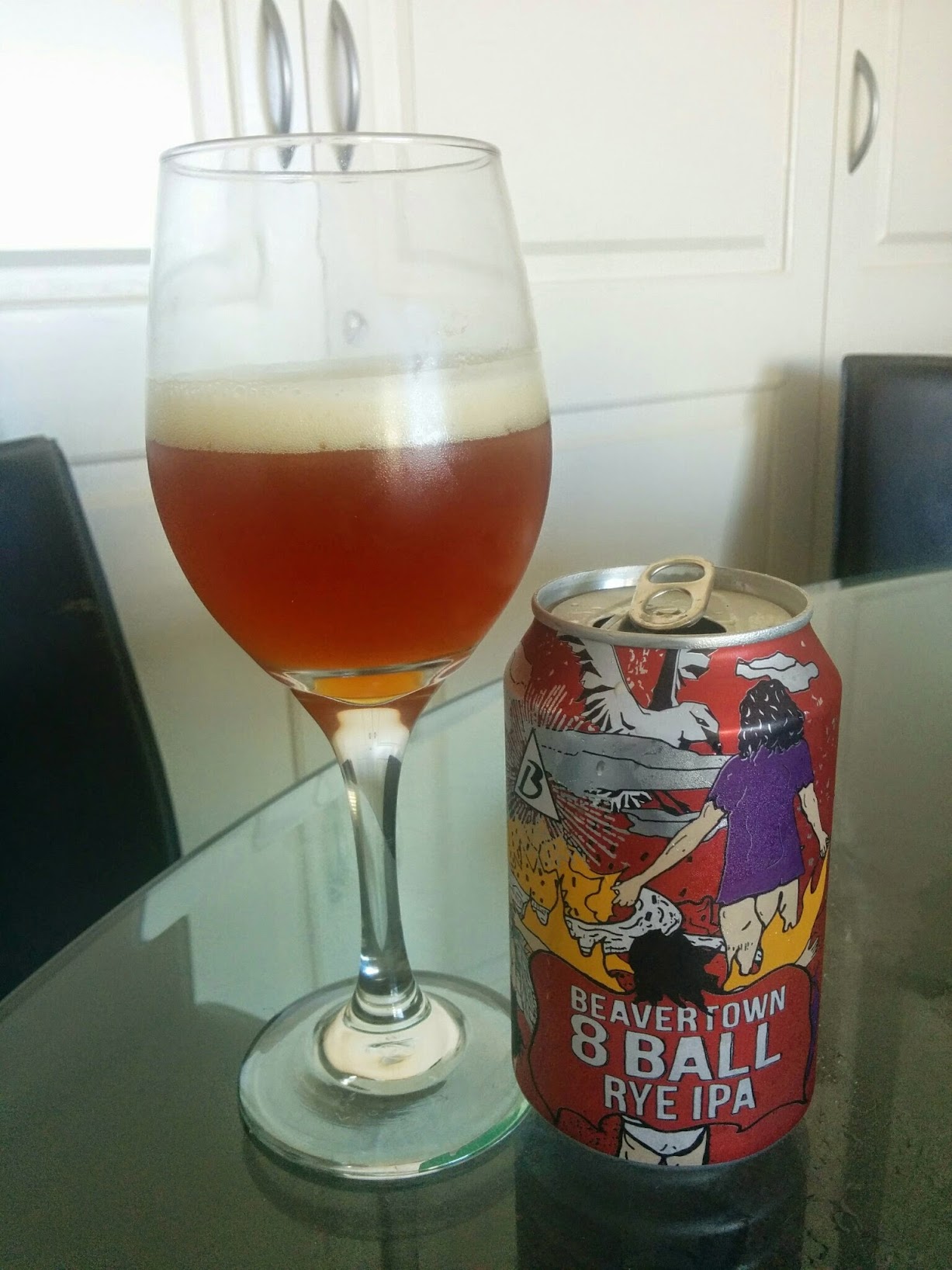 330ml can purchased from Oak Barrel in Sydney.

Pours a murky, deep orange colour, perhaps even with a slightly brownish tinge to it. Head is fine and firm, leaving a filmy crest of off-white and nice streaks of lacing. Body is very weighty, especially for its size, and holds a lot of carbonation. Looks very pleasant overall.

Nose is very nice indeed, with a strong nutty rye character overlaid with a very pleasant structure of fragrant hop tones. Pleasant citric tones come through, along with an almost icy green quality that seems both sharp and broad at the same time. I really like it.

Taste is also excellent. The malt is also strong here, giving a lovely nutty, slightly spicy quality to the structure of the palate. There is a pleasant balance from the hops, giving a little fragrant bitterness and more of those lively citric tones. Very smooth feel as well, with a creaminess that comes from the carbonation more than anything.

Really beautifully drinkable: this is most certainly my favourite brew from Beavertown so far. This shows a masterful use of rye to accentuate and enhance a hoppy beer—it's got the hallmarks of the very best beers that do just that.
appearance: 4.25 | aroma: 4.25 | taste: 4.25 | feel: 4.25 | drinkability: 4.5
Gamma Ray
5.4% American Pale Ale from Beavertown Brewery
Overall:
67 / 100
(Solid) 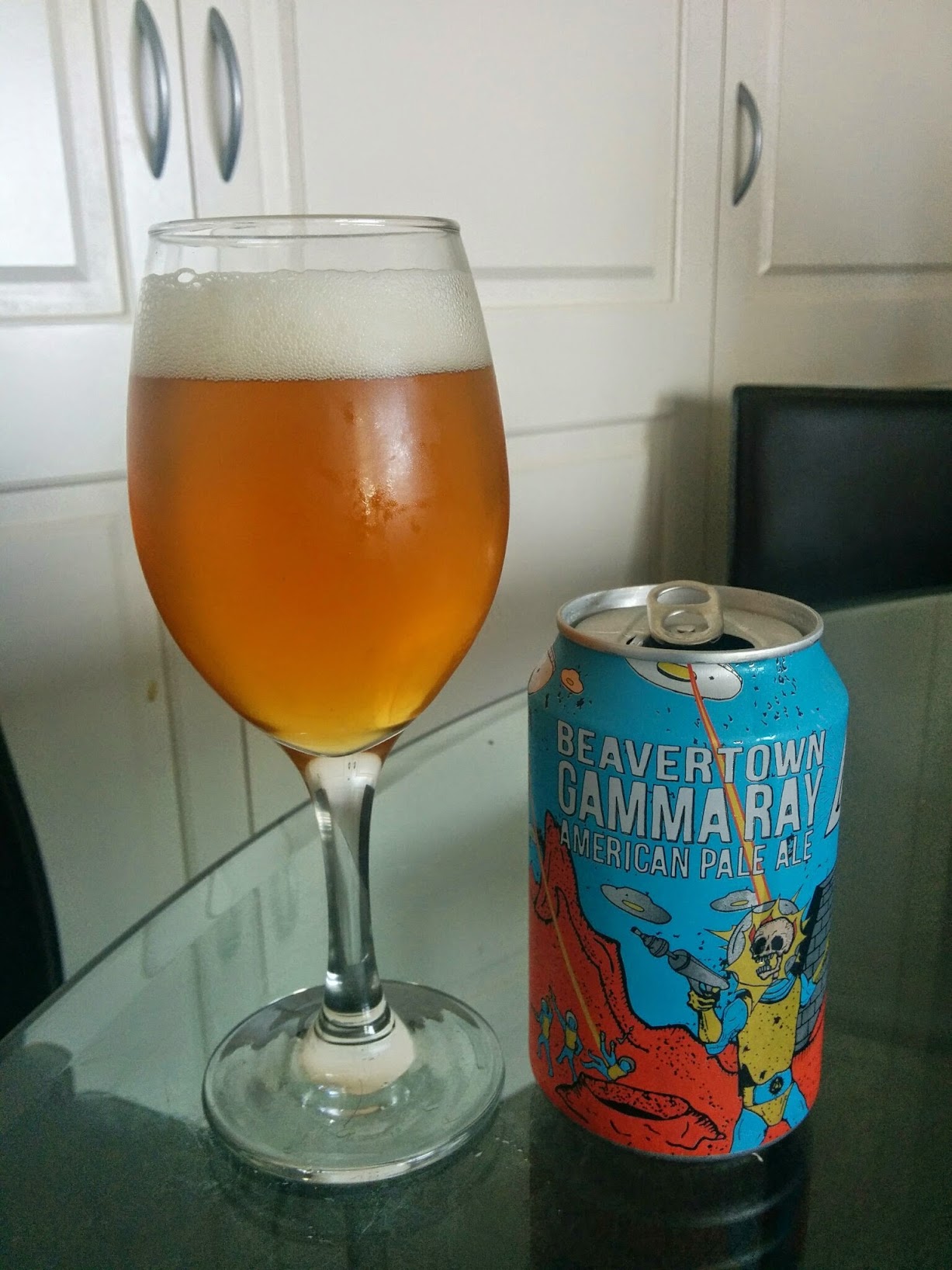 330ml can purchased from Oak Barrel in Sydney.

Pours a pleasant golden yellow colour, with some mild hazing in the body. Head forms a frothy crest, but settles out to a mild fine ring of white that leaves good, solid frothy sheets of lace. Body is light, with a little bit of boisterous carbonation when tilted. Looks pretty decent.

Nose is pleasantly nutty, overlaid with a mildly herbal hop note, which lays on a little pine essence with a more scrubby bush character. It's certainly not what I'd consider a classic American hop character (despite the "American" in the name), but it's genuinely pleasant on its own terms.

Taste is also good, mainly because there's a highly attenuated lightness to the body here, that makes it feel light and drinkable. Despite this, the hops are fairly restrained, meaning the bitterness is still quite crisp without being overwhelming. Malt is very muted, despite that nutty character on the nose, but there is a slight structure underneath it which helps give it a little bit of basis. Pretty decent.

Feel is very light, but that helps the drinkability.

Overall, yep, this is a solid beer, albeit one that firmly sits in the category of "drinkable pale ale". I don't think it does anything wrong, but it doesn't really push the envelope much either. It's fine: I'd pick it up if I saw it on an otherwise uninteresting menu, but there are plenty of other very similar beers already out there.
appearance: 4.0 | aroma: 3.5 | taste: 3.75 | feel: 3.5 | drinkability: 3.75
Smog Rocket
5.4% Smoked Beer from Beavertown Brewery
Overall:
68 / 100
(Solid)
330ml bottle purchased from Slowbeer in Melbourne.

Pours a dusty brown colour, quite dark, but certainly brown rather than black. Head forms a huge frothy crest initially, despite a careful pour, but settles into a centimetre or so of tan froth. Lacing forms in pretty tidy, solid streaks. Looks decent enough.

Nose is sweet-smoky, with a subtly ashy character coming from the smoked malts, but a stronger chocolate or toasted sweetness coming through from the other malts. Mild fruitiness makes an appearance as well, leaving a subtle suggestion of red grapes and cherries. Mostly, the chocolate and the sweetness win out, although the other characters add complexities to the aroma. Nice stuff.

Taste is a little simpler, but still pleasant. Solid toasted basis leaves husky chocolate and brown malt characters somewhere between sweet and savoury. Slight bite of roast on the back is accentuated by the smoke, making it seem a little darker than otherwise. The smoke flavours are quite subdued, leaving just a reminiscence in the aroma. Feel is quite light, but the sweetness that remains gives a vestige of body to the palate.