Pale lager aged in foudre on Brettanomyces. Tried in a bottle at the Wild Rover in Surry Hills during Sydney Beer Week.

Tastes a bit tart, and gets kinda weird, sour and yet creamy, with a big kind of dry, yet creamy note on the back. Has some oaky vinous characters, but it's quite wild and sour too. Tastes ultimately herbal and a bit dour; lots of character but not really pulling them all together; I think the base beer is a little simple so it's just ageing characters piled on.

A bit fizzy; has some substance but doesn't match the flavour profile.

Smoked beer with apples. Bottle shared with Jez at the Wild Rover in Surry Hills during Sydney Beer Week.

Pours a dark amber colour, decent colour with fine cloud. Some head; mild but retains well. Good colour to it. Off-white. Some lace, but mostly unimpressive.

Sticky sweet; had a big British feel to it. Not too bad but a bit too heavy. 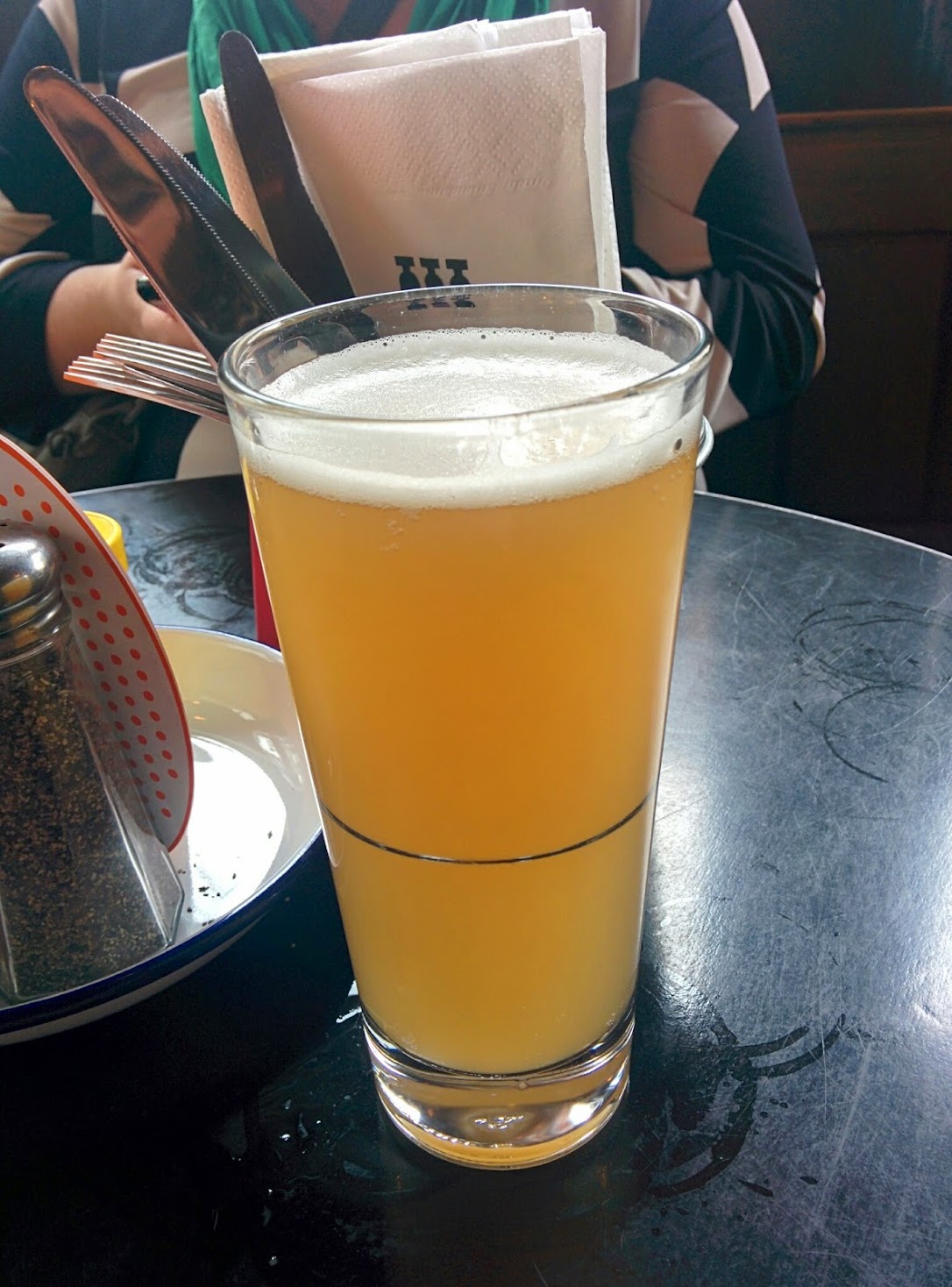 Pours a very cloudy pear-juice colour, almost green-yellow. Head is a little frothy, but very thin, leaving only a little mess on the top of the glass. Lacing is minimal. Looks pretty interesting at the very least.

Nose has definite sourness to it, plus funk and a bit of decomposition. Lemon sherbet at the sweeter end, green olives at the more dank end. Probably some Brett to it, but the guy behind the bar seemed to think it was a sour mash, so perhaps not. Still, it's pretty complex, if a bit whiffier than the cleaner, straighter wild ales.

Tart entry on the palate, more vegetative notes towards the mid-palate and a bit of rotting undergrowth or wet, mouldy grain. Slightly briney on the back, with lots of acid. This leaves it bone-dry, but astringent and very sour at the same time. Finish cleans it out: champagne-like, dry and tart, and slightly salty.

Feel is dominated by the acid, which has free reign to shape the palate.

330ml brown bottle purchased from Leura Cellars. For a beer named "Fresh" with the warning "Drink Now + Don't Age" on it, I was a little dubious, given it doesn't have a date on the bottle and it's here in Australia on the other side of the world from where it was born. Still, let's see where we go...

Pours a pale golden colour with a massive crackling head of white that forms swiftly and settles to a foamy mass that stays pretty persistently. Lacing forms in soapy clods. Carbonation is quite aggressive, running through the body very swiftly. Looks pretty good.

Nose is pleasant, but given the rhetoric on the bottle, I suggest it isn't as fresh as they hoped it to be when drunk. Pleasant citrus hops come forward with a slight tingle of passionfruit or guava, and a cut grass/pepper spiciness. It's certainly pleasant—the main issue is that it's not as powerful and potent as it might have been. Amp that aroma up and I'd be loving it.

Taste is clean and slightly earthy, with a clear but somewhat woody hop bitterness towards the back. It actually works rather well, but it's the sort of bitterness you get in a beer that doesn't smell like this. Pleasant and herbal, but lacking those fruity/citric flavours suggested by the nose. Finish has a pleasant lingering bite and a hint of nuttiness, and the carbonation is remarkably rather tamed.

Feel is good: there's not a whole heap of tingle to it from the carbonation, but is does get a bit gassy after a while.

750ml brown bottle purchased by my brother Sam from Slowbeer in Melbourne and gifted to me for Christmas.

Pours a very pleasant deep brown colour, solidly hazed and opaque, but with fluidity to it. Head forms a huge, chunky crest of beige to begin with, but settles out to a faint film pretty quickly as the carbonation crackles it out to nothingness. Body is pretty light. Looks okay.

Nose is pleasant enough, moderate smoke characters giving a strange lilt to the predominantly dark, malty body. Slight green vegetative or herbal notes are alive underneath this, and everything is laced with a rather potent overcarbonation. Some sweetness comes through as well, but a generic malt character more than the "brûléed sugar" mentioned on the label. Not bad.

Taste is pleasant, because it's a little bit lighter: clean entry lets the smoke and dark malt wrap around each other to provide a dry basis that does indeed remind me a little of Lapsang Souchong. Husky finish has a vague touch of nuttiness, but stays mostly dry and crisp—I like that dryness in a stout in any case, but with the smoke it works particularly well.

Feel is light and dry for the most part. It works well with the flavours on the body.

Pours a fairly clear red-brown, with a fine, firm head of beige that leaves superb streaks of lace. Body is solid, and holds fine swirls of carbonation. Looks really nice.

Nose is sweet-tart, with funky esters over an almost candy-like acidity. Oak comes through, as does a suggestion of chocolate or cocoa, giving it that really nice balance between acidity and darkness. Extremely pleasant.

Taste is smoother, sweeter, with banana aromas and a slight roasted tone on the back. The roasted character gives it a bite on the back, and punctuates the acidity. Lingering medicinal tones work well with the residual tartness, leaving it slightly astringent, but quite refreshing.

Feel is good. Smooth on the front, but with a tannic bit on the back.

Overall, I really liked this beer a whole lot. It had a lovely blend of sweetness, tartness and roast, and used them together to create stacks of interest. Certainly something I'd seek out again.