330ml brown bottle purchased from the brewery in London. Brought back to Sydney where I shared it with Sam.

Pours a pretty heavily hazed bronze-amber colour: heavy in body and heavy in haze, but with a nice fine carbonation that sits pretty steady when tilted. Head is a lovely fine creme of white. It looks thick and really very nice.

Nose is stretched and a little thin. Definite organic greenness, but with a rather unpleasant cabbage note to it. There's a hint of yeasty spice, but really not much to it. Mostly it's dank and a little unpleasant. It has some character, but not all that much in the way of actually pleasant character.

Taste is maybe a little better, perhaps because the sweetness gives it a sense of depth that the other characters don't really warrant. It has a pasty papery note that suggests that it was good at one time, but has just been subsumed by yeast. There's a little bit of spice, but it's really quite flat and disappointing.

Feel is okay. There is definitely some weight there—it's just so disappointing that there's nothing that it works with.

Overall, I'm definitely disappointed. Partizan had some very decent beers on tap (and were genuinely nice guys when I chatted to them), but both of their bottle beers were very disappointing. It's a real shame.
appearance: 4.0 | aroma: 3.0 | taste: 3.0 | feel: 3.5 | drinkability: 3.25
Quad
11.2% Quadrupel from Partizan Brewery
Overall:
76 / 100
(Excellent)

330ml brown bottle purchased from the brewery in Bermondsey. Brought back to Sydney and shared with Sam & Rich.

Pours a solid red-brown with good clarity. Head forms a fine but minimal film of pale off-white. Lacing forms in patchy inconsistent streaks. There's a little weight to the body, but nowhere near what I expect. Decent enough though.

Nose is slightly nutty, hazelnuts coming through in particular, with a slightly fatty sweetness. Some spice: a little cinnamon, perhaps, with just a jot of acidity like pickled orange peel. As it warms, it gets broader and sweeter, which really helps it a lot. I like it.

Taste is a bit flat, but still pretty broad, and with a good deal going on. Slight peppery spice, more pickled orange notes, and a persistent vanilla note which helps with the broadness and the sweetness. It lacks a little complexity overall, but there's plenty to enjoy as a whole.

Feel is smooth but sticky—lacking a true sweetness and body to be really rich, but certainly well-matched to the flavours

Overall, I'm pretty impressed. I liked the Partizan beers I had at the brewery fine, but I don't think either made it to the standard of this. As an aside, I coincidentally happened to have this beer on an evening where someone else brought an (admittedly old) bottle of Westvleteren 12, and this absolutely held its own against it.
appearance: 3.75 | aroma: 4.25 | taste: 4.0 | feel: 4.0 | drinkability: 4.0
Saison Grisette Lemongrass
3.8% Saison from Partizan Brewery
Overall:
67 / 100
(Solid) 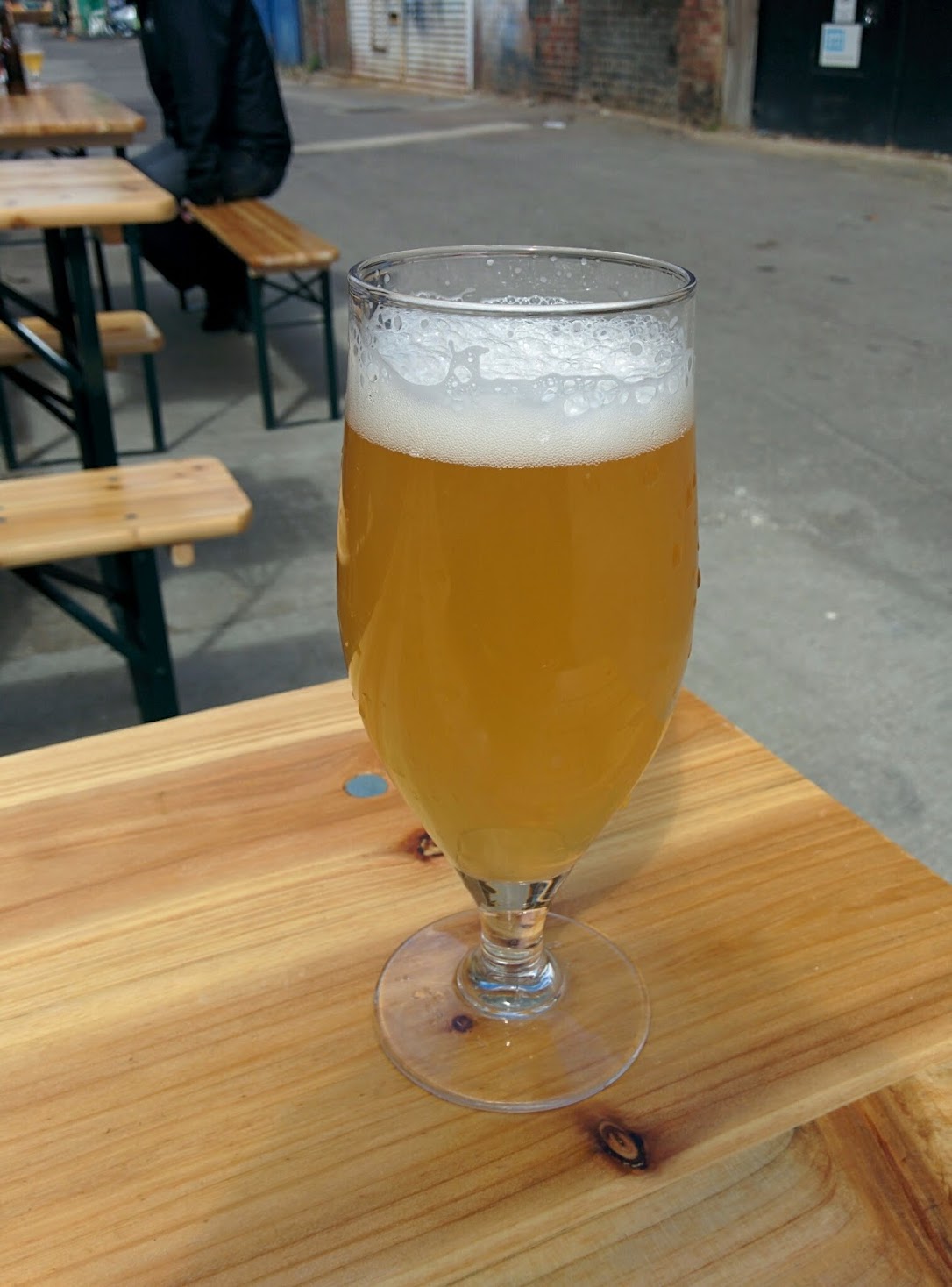 Tried on-tap at Partizan Brewing in Bermondsey while doing the Bermondsey Beer Mile.

Pours a pale lemon-yellow/straw colour with solid hazing. Head is white with a yellow tinge, forming a ring of fine bubbles as a head. Patchy but sticky lace forms. Body is fairly fluid, but solid, and holds very fine carbonation. Looks good.

Slightly funky notes on the nose, sweet lemongrass coming through as well above a beer basis that's more grassy and green. Rounded yeast and a bit of weird corny sweetness. It's solidly weighted at least.

Rounded Belgian notes on the front palate, turning smooth and slightly buttery. Light candy characters like Redskins lollies. Lemongrass on the back with some bright spice and a lingering sweetness. Aftertaste is a little watery. It's pleasant and light at least.

Feel is a little bit weak, but with length to it. 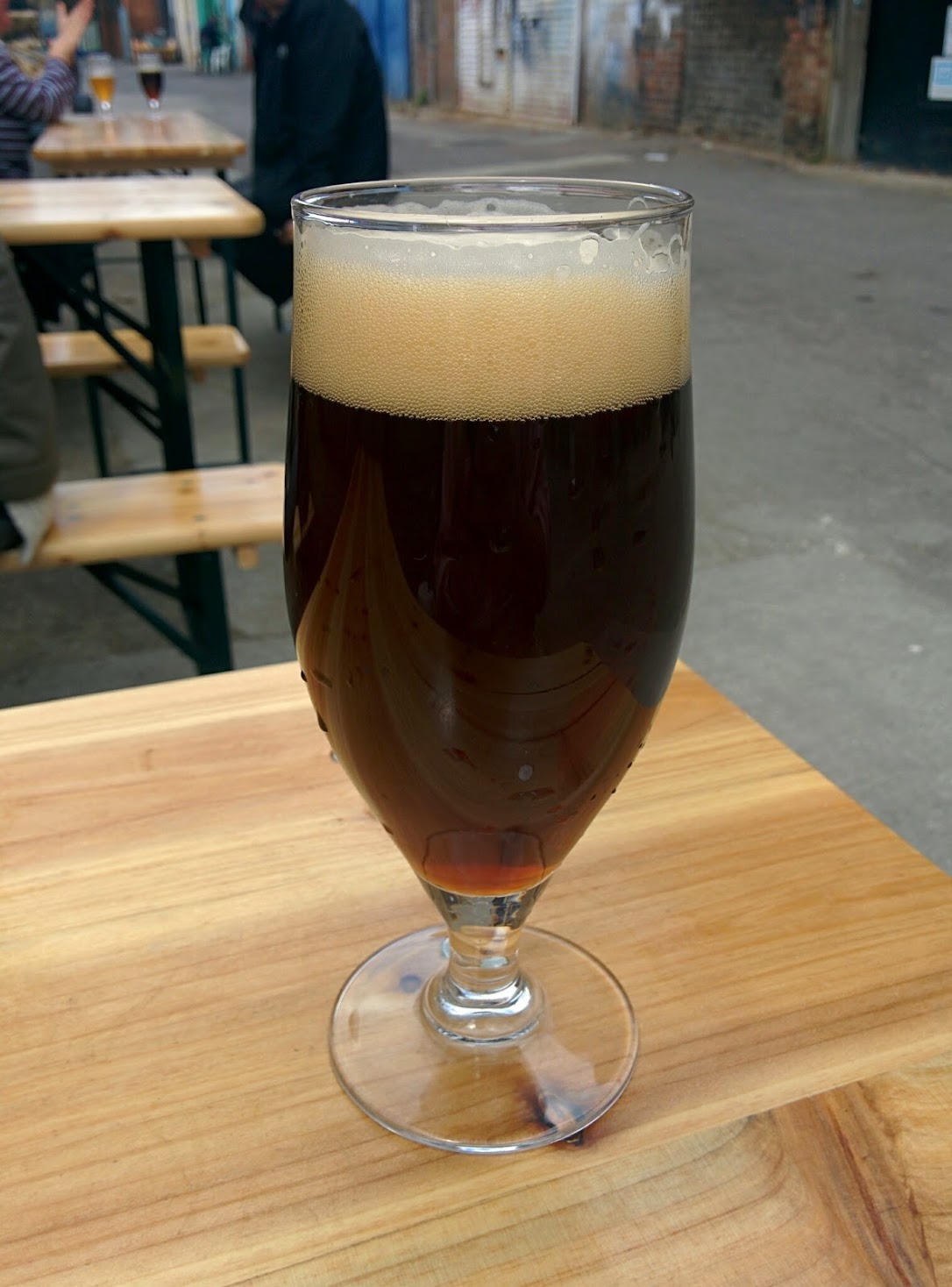 Tried on-tap at the brewery in Bermondsey on the Beer Mile.

Pours an amber-red colour, deep and quite clear in the glass. Body is light, but pleasant enough. Head is a yellow-beige/taupe colour, coarse but persistent, leaving sudsy, complex lace. Carbonation is fine but minimal. Looks pretty good all up.

Weird spice characters come through on the nose—smells like a Thai restaurant. Sweet caramel, malty roast and some pepper. There's also a honey sweetness that sticks around and an odd creaminess. Interesting at least.

Taste is clean and mild for the most part, but things come and go at least. There's a mild toasty sweetness on the front, and a frothy spicy character that builds up on the mid-palate. Some roast marks the back, but by then the palate has dropped out a lot leaving it clean but empty.

Feel is pretty weak—which is disappointing.