Pours red, rather than purple - if that was the idea? - with a bit of cloud but not a whole lot. Head is cream, sparsely webbed but retaining alright. Looks OK.

Smells hoppy, largely fruity and quite lightly so and refreshing, with pear, mango and apricot being the dominant notes. Again, not bad.

Taste is alright, too. Fruity hops that come on early across a very light grainy malt base. Mango dominates the mid-palate and then makes way for grapefruit with a touch of bitterness late-mid. Finishes somewhat yeasty, with just a slight linger of that fruit character. Not great, but not bad either.

Decent body, with a sharp cut of alcohol late, possibly just because the finish is not really there on the palate there's nothing to cover it.

Could use more cut through from the hops on the back; the NEIPA characters are not badly done but because it's quite big the booziness shows through and is ultimately unwelcome.
appearance: 3.5 | aroma: 3.5 | taste: 3.5 | feel: 3.5 | drinkability: 3.5
Bountylicious
7.0% Dunkelweizen from Six String Brewing Company
Overall:
56 / 100
(Decent)
Coconut dunkelweizen brewed for GABS 2016. Tried there on tap.

Pours a brown colour, fair bit of sediment to it. Head is beige, creamy nitro in appearance and sticks around for a thick crema-esque head. Looks awesome. Really appealing.

Smells sweet, and fairly simple for the style and the size. Caramel-choc notes with a touch of spicy roast. Definitely lacking coconut.

Taste is fairly nice, chocolate notes upfront that develops into a buttery, vanilla mid-palate with a slight hint of weizeny spice on the back, hint of pepper and maybe some clove. But really not a whole lot of coconut which I was hotly anticipating. Not bad but disappointing.

Tingly mouthfeel, which helps cut through the sweet palate. 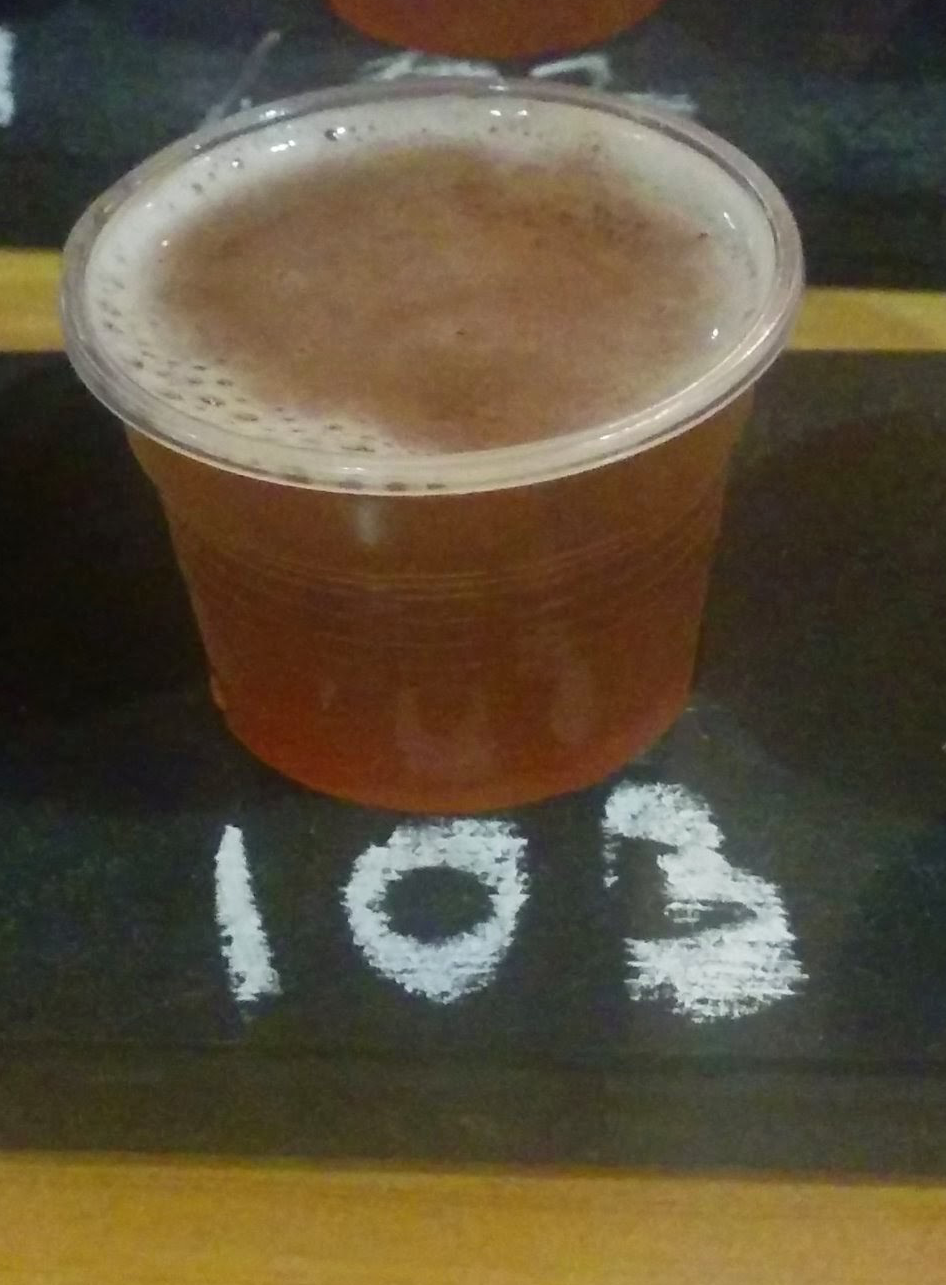 Pours a very pale yellow colour, quite clear in the body and light weight. Head is white, forming only a futzy ring of bubbles, but some strong lace despite this. Tilting, there's some minimal carbonation released. Looks okay.

Nose has some toasty coconut to it and some fragrant lime leaf. Decent notes of lemongrass come through too. It's nice enough, but certainly not really huge.

Light, thin kaffir lime notes on the front, which tend to dominate the palate. Some spice comes through in the centre with a little hint of stewed orange peel. Kaffir again raises its head on the back, slightly pithy and a little harsh. Aftertaste is relatively smooth though and after drinking it my burps are aromatic.

Feel is light and a little gooey.

Smells fruity and tangy; citric dominance with lemon mostly and a touch of peach. Slightly bitter but could use more edge, more Thai spice.

Taste is more on the Thai spice. Lemongrass, kaffir lime. Maybe even a touch of galangal at the back of the throat. Slightly bitter, those Thai spice notes dominate without a huge hop character but not bad.

Decent body, slight alcohol warmth as it goes down, but otherwise nice and smooth.

A rye amber pilsner brewed for GABS 2014 in Melbourne, which is where I sampled it.

Deep golden in colour, perhaps a little light for the "amber tag", and fairly clear and light through the body. Head is white and fine, forming in a firm ring that leaves solid lacing. Looks good.

Nose is fairly staid. A little bit grainy with a touch of sweetness like golden syrup. A faint suggestion of hops come through, but just really adds a cereal quality to the malt. It's pretty weak all up.

Taste is a lot better. Slightly nutty entry with a touch of edgy hops that develop towards a clean spice through the mid palate. Rye gives a touch of acidity along with the spice, but not unpleasantly so. Back is fairly smooth and balances out the spice and lightness of the rye nicely, just leaving a little linger of pepper and hops on the back. Very nice. Feel is quite smooth for a lager.

Chai on the nose, yep. Touch of rye bread and sourdough in with the mix of cinnamon, licorice and a big wallop of star anise. Not bad at all.

Taste is very decent. Lots of chai on there with a nice blend of cinnamon, clove, plus licorice, star anise and a subtle twist of lemon. The darker malts with the spice mix gives a touch of rye bread character as well. Nice malt base and nice blend of chai spice.

Pours a thin brown colour with decent clarity to it and a rather light weight behind it. Head is an oat-tinged white in colour, forming a slick oily film across the top of the glass. Looks decent enough.

Nose is a bit light all up, and with some of the spices providing oddities of aroma that don't necessarily work. I get aniseed which pings off the malt to be slightly rubbery. There's also some chocolate notes and a hint of ginger. But, again, it's a little bit light. Not bad all up though.

Taste has some pleasant roast characters on the front, before that aniseed character comes through a little strongly again, giving that rubber note another foothold. This cleans out by the early back palate where the aromatics seem to reach a pleasant equilibrium giving the perfume of an southeast Asian marketplace. Feel is very light: it could certainly use a bit more.

Overall, though, it's quite nice. It could use more body, more roast and could reign in the spices a little so they work more coherently together. It's got ABV to play with, so it could definitely afford a little bit more weight and sweetness at least. Nice overall.

Pours a genuinely deep red with good clarity, but a really nice depth of colour—it's definitely living up to the "dark red" of its name. Head is beautifully creamy, just off white, but rich. Full, streaming lace. It looks awesome.

Mild neutral hops on the nose. Clean and crisp citrus takes the bulk of the interest above a slight malt character that doesn't really add anything flavour-wise, which is a bit of a shame given the dark colour and the body. It just ends up being a little more generic and a little less powerful than it should be.

Very clean entry on the palate, but again, this just underlines how neutral and limited the malt character is. Smooth plasticky note from the hops balanced with a slightly rounded character. Some crispness on the back, but almost no bitterness. It is all in balance, at least, but it's balanced in a rather bland way. This could be twice or three times as aggressive and be five or six times as interesting.

Feel is good, following through on the promise of the body and that beautiful creamy head.

Overall, this is clearly well-made stuff: it's crafted well, balanced, and without anything out of place. But it should be bigger for what it is. If the flavour was just upped across the board it would be a really top-notch beer.

Had on tap at the brewery.

Pours a pale gold colour, maybe a touch of haze. No head left, which is a shame (Chris the brewer tells me they need to change dishwasher liquid). It looks pretty bland, really.

Smell picks up a lot of that slack. Lovely aromatic, organic barnyard funk with notes of rubber, some fresh lychee, rosewater and big peachy stonefruit at the back. Summery and fresh and lovely; could maybe lean a bit heavier on the true saisony notes, but still very enjoyable.

Taste unfortunately dips a bit from the aromatics. Bit light on the funk, with more of a German banana ester. Spice notes, clove and aniseed as well and a touch of nutmeg. Light rubber on the back. Pleasant beer, but a little lacking in the big saison notes the nose promised.

Light carbonation sizzle, a bit drying towards the back. Not bad.

Had on tap at the brewery. I'm aware of how hideously offensive the term 'Dark Red IPA' is. I don't care.

Pours a nice burnt earth colour, red tinge up to the light. Head is beige, and pleasant. Nice density with awesome lace left behind. Looks a treat.

Taste is big and hoppy. A bit of chocolate and roast from the malt, then big hop characters, earthy bitterness with notes of green pepper, pine wood and citrus. Very decent IPA structure, with a nice malt character. It's not quite roasty like a black IPA, but certainly something darker, sweeter to prop up the hops. Nicely done.

Feels alright, goes down nicely enough. Decent body doesn't leave too much hanging despite the obvious and abundant hop oils.

Slight tartness on the nose, banana and apple coming through. Just a hint of mild spice. Par for the course, nothing too special.

Taste is a bit weak, some banana esters and other fruit, with a touch of anise on there. Fairly sweet and fruity characters throughout, particularly on the back where I'd prefer more spice esters to come through.

Not a very full bodied hefe, quite light and slightly dry without much spice oomph. Bit of light sizzle from the carbonation.

Smells hoppy and fresh. Strong honeyed-oat character on the nose upfront and then playful citric notes at the back, with a touch of peach and apricot; tangy and nice. Very light, too, but enjoyable pale smell.

Taste is pleasant and fresh. Pretty caramelly upfront and then plenty of hops make their presence known quickly. Light bitterness, citric and piney and then a little astringency on the back. Woody as well, though and not unpleasant. Still quite bitter for a pale on the aftertaste. It lingers. I can see people really enjoying this but not sure about the 'gateway' factor for this drop.

Decent mouthfeel, good body and fairly dry towards back. Nice.

Had on tap at the brewery. Pours a pale gold colour, with clear rim of white head. Leaves some nice lacing around the edge; not bad.

Smells honey and sweet. Honeyed cereal grain, with golden syrup and some earthy hoppy notes: hint of citrus, and some herbal notes. Nice.

Tastes similar, with earthy and honey notes. Light English sort of hop characters and Belgian-style finish. Grassy, earthy herbal note of coriander maybe and lemon thyme. Bitterness is good, and slightly phenolic on the finish. Very pleasant indeed. Light bodied, but slightly challenging. Belgian bitterness with an English cleansing note on the back.