7 cent Brewery
from Australia
Tropic Thunder
4.0% Chile Beer from 7 cent Brewery
Overall:
62 / 100
(Decent)
Another weird "Let's throw lots of everything in and see what happens" GABS beer that's hard to categorise - sour beer with mango and sriracha. I've called it a chile beer which seems like the least worst option. Tried at the festival on tap.

Pours a pale straw colour, slightly cloudy with a thin rim of sparsely webbed white bubbles. Bit meh; inevitable with this type of beer though.

Smells like sriracha. Big vegetative chilli note, maybe a touch of sour vinegar character and a big cumin note. Not a lot of mango or fruit generally, but quite pleasant.

Taste is pretty nice too. Good fruity character with mango and orange peel in equal measure. Notes of sriracha including fruity and vegetative character, a hint of undergrowth to it and some general earthy spice notes towards the back. Bit weird, but I quite enjoy it. Not really any heat to it though.

Body is a bit thin, but the texture is fine as it goes down. If the sriracha came through really spicy it might be a bit much, so thankfully it's not too hot.

Decent fruity, tangy beer with a good chilli flavour on there as well. Surprisingly accessible given the weirdness of the proposition.
appearance: 2.5 | aroma: 3.25 | taste: 3.75 | feel: 3.25 | drinkability: 3.5
Belly Button Beer
4.5% Witbier from 7 cent Brewery
Overall:
50 / 100
(OK)
In theory I should call this a Wild Ale since it's most similar to Rogue's Beard Beer (which is classified as such). But 7 Cent called this a Belgian Wit-ish, so that gets the points.

Tried on tap at GABS 2016. I was so sick of this beer before going into the festival because of the stupid amount of media attention it got just for its gimmick of being made from yeast cultivated from the brewer's belly button. Predisposed to hate it, but happy to give it a chance.

Taste is grainy, with cereal grain and more of that plain oatmeal character. There's a slight earthy, organic flavour towards the back and develops a very soft touch of spice on the back out of that. Mildly vegetative, but what it really is is bland, and flavourless.

Body is thin and insubstantial. There just doesn't seem to be anything really behind this beer.

A gimmick and nothing more. What's really disappointing here is that its overall effect is of it being dull, rather than unpalatable. I feel like they embraced the novelty factor wholeheartedly hoping that it would make up for the lack of substance in the beer. Needs a rethink. But not a redo.
appearance: 3.0 | aroma: 3.0 | taste: 3.25 | feel: 2.5 | drinkability: 2.75
Beer is so Over
5.5% Fruit Beer from 7 cent Brewery
Overall:
19 / 100
(Awful)

Tried on-tap at GABS 2015 in Melbourne. This is a beer brewed with a strange melange of hipster ingredients including kale, goji berries and probably quinoa and artists' tears.

Pours a pinkish red colour, quite clean of hazy with a light body holding some powdery carbonation. Head is a pale pink that forms a foamy and full crest and leaves nice fine sheets of lace. Looks good.

It's downhill from here though. Smells immediately yeasty, woody and vegetative, mostly with a kind of raspy woody hop note, but with unpleasant quirks of sewer funk and crushed silverbeet. I'm not a fan.

Taste is slightly worse even than that. Nasty, bitter vegetative flavours from the start, slightly medicinal on the front. These ram up against more of that unpleasant woody hop note, and dank yeasty quality. The back is nasty: bitter and unpleasant. Apparently goji berries taste like shit. Finish is the same. Very unpleasantly bitter with a whack of carbonic acid.

Feel is light and frothy, but it doesn't help the beer much.

Smells kind of how I expected; grainy with a slight nutty character to it, and a touch of fruitiness which bends towards phenolic. Not very aromatic.

Taste is somewhat unpleasant. Light tartness to it with a touch of goji berry. Develops a medicinal character midway and then finish is watery, with a touch of vegetation. Not really nice but not too nasty.

Body is watery, light carbonation. Not too bad. 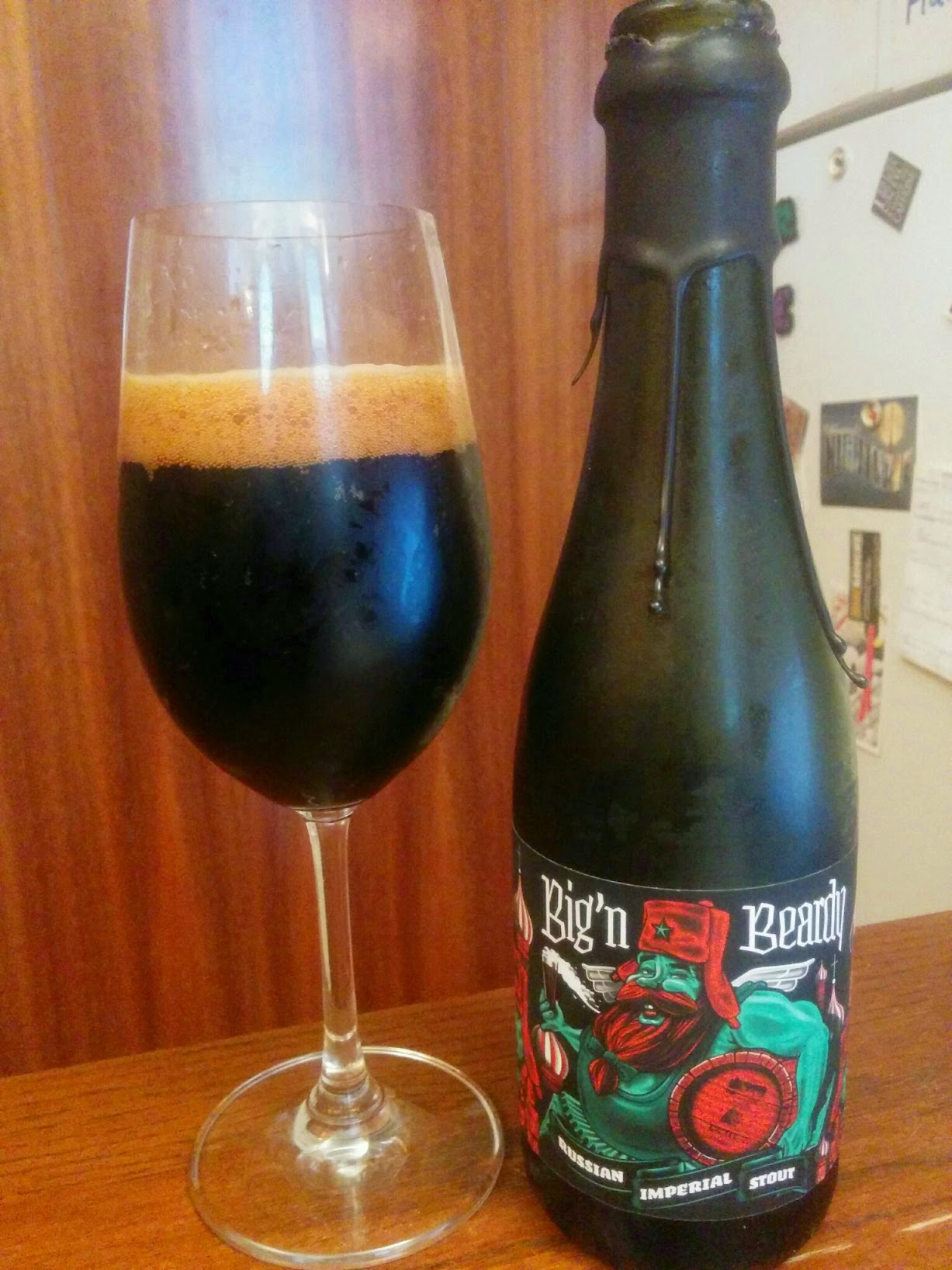 Pours a deep, very deep black, even at the edges—almost charred coffee-like in the corners of the glass. Head is a fine brown, leaving complex streaks of intricate lace. Despite all of this, the body looks quite light and fluid, and the carbonation, while fine, moves rapidly through it. It's an interesting and perplexing dichotomy.

Nose is certainly odd. Initially, I got a big whiff of olive brine, possibly the result of some funky barrel work, but as it warms, more of the toasty malt character comes through, which relegates the funk to a vegetative backdrop. Instead, it smells slightly dusty and musty like a dry, ancient cellar. There are some other really unexpected and odd notes in there as well. I get some marmalade and almost a treesap or eucalyptus note. Yes, there's also some roasted characters in there as well, but it's the weirdnesses which push it into the realm of genuinely off-kilter.

Taste is extremely dark, almost acrid and ashy. There is so much roast here that it feels like its sapping the moisture from my mouth. Bitter with dark malts to a pretty insane degree. There are very few alleviations to the onslaught—one is the feel, which is pleasingly slick and smooth and oily, but this has the disadvantage of making the ashy character seem to coat the tongue. There's also a firm alcohol note, but again this seems to accentuate, rather than lessen the bitterness. I genuinely feel like this is too much.

Yes, apparently it is possible for a beer to be too dark. This is actually ashy and genuinely a little unpleasant. This needs more body, and more sweetness if it's going to persist with all that roast. The barrel aging is almost not apparent, apart from that suggestion of weird funk on the nose. Overall, I can't say I'm a fan.
appearance: 4.0 | aroma: 3.5 | taste: 2.0 | feel: 4.0 | drinkability: 2.0
Wet Willie
7.0% American Brown Ale from 7 cent Brewery
Overall:
54 / 100
(OK)
Pours a deep amber-red colour, huge cloud throughout, not really letting light through. Beige head, foamy density and sticking around nicely. Bit more red ale than what I was expecting, but nice.

Caramel malt notes upfront, descending into faint tangy hop character. Passionfruit and a touch of lemon but really, really subtle, almost hidden. It's the 'wet hop' factor again - the aroma is there but I really have to hunt for it.

Grape. Red grape on the palate, huge and unmistakeable. Touch of grapefruit bitterness late, some cedar wood characters and a big dank finish. Vinous for the most part, and a bit off. Not what I was expecting.

Tastes a bit off. From the description and aroma I was expecting something more fresh and hoppy. Not a terrible drop, just a bit off-kilter.
appearance: 4.0 | aroma: 3.5 | taste: 3.0 | feel: 3.0 | drinkability: 3.0
Wet Willie
7.0% American Brown Ale from 7 cent Brewery
Overall:
58 / 100
(Decent)
Tried on-tap during the GABS festival in Melbourne. This was a fresh-hopped "harvest ale", brewed quite dark and with some added rye.

Pours a deep amber-brown hue, solidly hazed and rich in the body. Head is full and frothy and very yellow in colour. Surprisingly, despite the weight and the fullness of the head, there's not much lacing as it goes down. Otherwise it looks pretty good.

Nose is disappointing. Slight toffee sweetness on the front with a light, leafy hop character and some rather burnt overtones and a medicinal ointment character. It doesn't really win me over, and doesn't match what they describe in their tasting notes.

Light, rounded entry on the palate moving to a chewy caramel centre. It's still very light though, meaning that the hop bite on the back turns a little phenolic without things to balance it. And the aftertaste has a residual burnt note which isn't softened by any real malt or complexity of flavour.

Feel is ok: pretty full and rounded, which just makes the lightness in the flavour a little more disappointing.

Overall, I wanted this to do more. This was a pretty bland offering, but it had the potential to be much better.

A soured cherry porter, tried from a bottle at Penny Blue during their Sourfest evening during GBW2013.

Pours a deep, black-cherry colour, with a hint of deep, bloody red. Head is full and deeply pink. Body is very light and soft and there's almost no carbonation visible. No lacing either. Love the colour, though.

Cherries on the nose with a slight hint of weird, off-kilter smashed cocoa nibs. Some grassy characters come through as does a little rounded, flattened tropical fruit. Sour milk chocolate. It's a bit light, but it's certainly interesting.

Taste is surprisingly rather clean and smooth. Some pithy characters through the centre of the palate and a little cherry skin on the back. There's a hint of acidity to it, but it's all very mellow and smooth: there's not a touch of sharpness to the sour character. There's also not a touch of roast to it, apart from the slight chocolate and cocoa tones in the aroma. On the palate, there's no chocolate at all: not much hint of the porter.

Overall, it's a bit watery and thin, and the lack of any semblance of porter past the aroma is a little disappointing. But the cleanness is quite pleasant, and the mild acid is restrained and interesting. It's pretty decent all up.