Pours a very pale straw yellow colour with a psychosomatic tinge of green to it. Haze is very prominent in a light-weight, lightly carbonated body. Head is white, what there is of it, but it dissipates very quickly to almost nothing.

Dirty, funky and pithy on the nose and quite potent. There's a touch of seaweed to it and lots of tart finger-lime citrus notes. That sea character comes back though with a fragrant, slightly pongy character of clam shells. It's certainly interesting.

Taste is lime-forward on the front, with a clean, bright, fragrant mid-palate. Biting citrus comes though on the back with some definite acidity, and a linger of carbonic soda in the finish. Aftertaste has a bit of that pithy lime again.

Feel is very light, but this is appropriate for the beer.

Overall, I found it really quite refreshing, and moreover quite interesting. I think I'd quite happily drink a bunch of this.
appearance: 3.75 | aroma: 3.75 | taste: 4.0 | feel: 4.0 | drinkability: 4.25
Fat Freddy got Finger-Limed
3.2% Berliner Weissbier from Dennis Beer Co.
Overall:
64 / 100
(Solid)
Pours a straw colour, hugely cloudy which gives it substance. No head at all but that's expected for the style, and the colour is nice.

Smells sour, tangy. Loads of lime to it with a touch of crisp green apple as well. Otherwise light, and slightly yeasty.

Taste is tangy and citric. Big lime character but rounded with lemon zest, some underripe Granny Smith apple and then again yeasty on the back. Not bad.

Body is surprisingly thick, I can only assume from actual sediment cloud. It's actually quite a nice pad for the tartness. 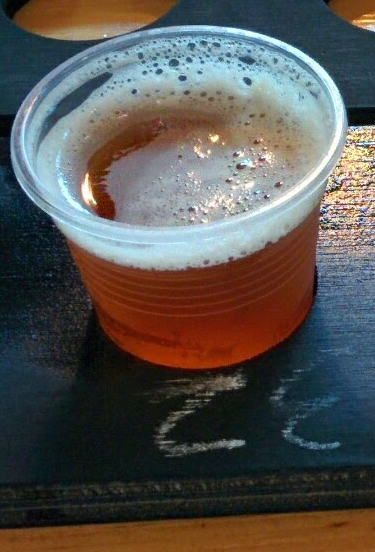 Tried on tap at GABS in Melbourne.

Pours a deep golden colour tending towards a pale amber. Some hazing comes through. Body is very heavy, which is not surprising at 11.9% ABV. Head is yellow-white and forms big frothy bubbles of residue and lace. Looks good.

Huge initial hit of hops on the nose. Big fruity sweetness almost tending towards candy brightness. Like on their Mad Hatter I get reminiscences of Redskins candy from childhood. Mostly it's bucketloads of hops though, and it's done with great style and power. I'm impressed.

Light entry on the palate with that aromatic candy sweetness coming through. This develops into a big true sweetness on the mid-palate, backed with an almost tea-like hop fragrance. Back does have a touch of the booze, but it's well hidden given its strength. Aftertaste lingers for a long time with plenty of clean bitterness. Feel is very smooth and tingly.

Overall, this is a cracker of a beer. Where's that 12% ABV? Were I a skeptical man I would say they're overclaiming—but I choose to believe that it just shows the skill of these guys that it ends up being as damn drinkable as it is for the strength.
appearance: 4.0 | aroma: 4.5 | taste: 4.0 | feel: 4.25 | drinkability: 4.25
Rocket Science Red Planet
6.4% American Amber / Red Ale from Dennis Beer Co.
Overall:
68 / 100
(Solid)
Tried at the Sydney Craft Beer Week launch party.

Smells hoppy, with nice malt notes. Distinct cinnamon and nutmeg notes with some brown sugar toastiness and some tangy hops. Pleasant, but a bit two-streamed. Doesn't quite meld together.

Taste has more hoppy notes. Apple, some citrus, that gets bitter and almost metallic on the back. Some malty notes, blends better with hops to merge subtly into bitterness from the slight toasty front. Decent drop; some nice toastiness.

Huge fruit hit on the nose. Masses of passionfruit, mango, guava and banana. NZ hop notes all over that, just a big fruit salad. Needs more grounding, but nice.

Taste is similar: lots of fruit salad with tropical notes - banana, papaya, passion, mango and a touch of pineapple. More edge though from the hops. Very soft bitterness, but enough to ground it after the mélange of tangy deliciousness. Really tasty beer, lots of fruit but nicely balanced.

Bit of fizz through the mouthfeel, decent enough body.

Nice quencher. Lots of sweet enticing flavours but plenty of down-to-earth beery bitterness to keep your cock on.
appearance: 4.0 | aroma: 3.5 | taste: 4.25 | feel: 3.5 | drinkability: 4.25
The Italian Job
8.0% American Brown Ale from Dennis Beer Co.
Overall:
75 / 100
(Very Good)
Tried on-tap at the Welcome Hotel in Rozelle during their Beer Mimics Food event for Sydney Craft Beer Week. This was a collaboration between Dennis and the Welcome Hotel itself, and if I remember correctly has chianti or grappa or some other sort of Italian booze in it.

Pours a deep ruddy brown, solidly hazed with good weight to the body. Head is a big hemispherical bulb of brown that leaves some sudsy lace. Some fine carbonation. Looks good.

Nose is toasty. Noticeable coffee aromas, some brown bread and a bit of toffee. Slight meatiness comes through as well, as does a decent amount of wood. It's pretty aromatic and pretty damn good.

Light entry leaves some burgeoning booze to provide sharpness. This blossoms into a chewy, boozy mélange on the mid palate, spliced with stacks of wood characters. More coffee comes through leaving a slight spicy sharpness. On the back comes the real sweetness, giving sticky date, liqueur-like coffee tequila and gingerbread spice. Feel is a little sharp: smoother would make things integrate even better, but all up it's pretty damn tasty.

One of the best beers at the event, from a brewery that's really pulling out some interesting and tasty things. This was good stuff.
appearance: 4.0 | aroma: 4.0 | taste: 4.0 | feel: 3.75 | drinkability: 4.0
Rocket Science Mad Hatter
6.4% American IPA from Dennis Beer Co.
Overall:
73 / 100
(Very Good)
Served out of a teapot at Vic on the Park during the Sydney Craft Beer Week launch party. They call it an "IPA with a twist", which is that it is infused with tea (hence the teaparty theme, no doubt).

Pours a nice deep golden colour, quite clear and bright. Decent head on the top, fine and white that leave really great lace. Very fine carbonation. Looks good all up.

Nose is awesome and weird. Big passionfruity New Zealand hops, but with an underlying candy sweetness that makes me think real-life actual passionfruit in the mix. There's a roundness to the malt that is so attached to the hops it gives it a gooey, almost buttery diacetyl character: it's not diacetyl though, it's just the way the hops and malt are working together. It's extremely interesting.

Taste is also sweet with hops: bright and fruity. Indeed, it could use something to counterbalance it in someway—both the hops and the malt contribute to sweetness, and there's very minimal amounts of bitterness. The counterbalance has to come from the neutral, slightly savoury character from the malt, and a hint of carbonic acidity on the back which does its best to fill in for true bitterness. It's still very flavoursome, but I think it needs just a tad more balance to be truly sessionable.

Very interesting stuff and very tasty though if I'm only having one. Dennis are really doing some awesome things. I love that.

Tried on-tap at the Vic on the Park during the Sydney Craft Beer Week launch party.

Pours a solid red colour with decent weight to the body and a little haze to scatter the light. Head is very firm, a crackling tangle of pale yellow that leaves very solid lace. It's a great looking beer.

Pleasant rounded hops on the nose with some citrus to provide a sharper tone. Underneath is a very solid caramel malt that gives some sweetness, but mostly provides balance: a little like marmalade it its balance of sharpness and sweetness. Slight herbal notes and a little pepper come through as well just to make it interesting.

Taste is very pleasant. Bright and clean entry that soon gets more heft from the malt making the mid-palate smooth and substantial. Cleansing bitterness on the back integrates with a burnt sugar/caramel character that evaporates into a burst of fresh herbs. Nice stuff.

Feel is lovely: smooth and clear with a latent carbonation. It's like a cask pull. Great stuff.

This is seriously good stuff: and it just solidifies Dennis as a producer of very fine beers. They're doing interesting stuff, but pulling off balance and coherence as well. Nice work.

Had on-tap at Harts Pub. I'd been meaning to try something from these guys for a while, and I'm pleased I got around to it last weekend.

Pours quite light in the body, clear and golden, with a decent and rather frothy white head that stays pretty solid in the glass, and provides ringed lacing as it goes down. It looks quite well-made with a hint of sophistication. I like it.

Nose is bright with sweet fruit, but a crispness that restrains it someone. I get fresh mango along with sharper pine characters and a clean, faintly grainy hop presence to give it some body. It's light overall, but very pleasant.

Taste is clean, crisp, bright and well-crafted. Clean bitterness on the back, smoothing malt through the centre, with a slightly grassy aftertaste. Again, it's very light (which is slightly more detrimental on the palate), but it's quite clean and refreshing.

Feel is very light and crisp.

Overall, this is a nice package, and I'd happily drink this frequently. It's hard to get an Aussie pale ale to stand out with me, but this does all the right things. It has lots of flavour, but balances this with a crisp, light drinkability. I look forward to trying Dennis's other beers.