Get Radical
from France
Bodacious Cowboy
10.9% English Barleywine from Get Radical
Overall:
40 / 100
(Not Great)

Pours a pretty light and fizzy pale brown colour, with a head that fizzles out to nothingness pretty quickly. Body is pretty light, but I guess that's what you get with lots of fermentable sugar. Minimal carbonation. Overall, actually not that great at all.

Nose is sharp and boozy, with a cognac-like buzzy harshness, and the residual woody aftertaste of fermented maple syrup. Otherwise, there's a dustiness to it, slightly earthy perhaps, but not really a lot more. Again, fairly disappointing.

Taste is thin and fairly sharp, with a rather harsh alcohol flavour if fortunately not much burn and heat. Metallic coppery characters come through, with a solvent-like aftertaste. Slightly bitter on the back. This lightness in the feel does make it less oppressive than it might have been otherwise, but it's still a big beer without much to say or contribute.

Overall, nope indeed. I tried 3 of Get Radical's beer on my trip to Paris, this is easily the worst. But when you're a gypsy brewer in a beer-poor country specifically going with a "Bière Expérimentale" label, you're bound to hit a few bumps. While this isn't a great beer, others like their Train to Mars brewed at Thiriez make a few mishits like this one worthwhile.
appearance: 2.0 | aroma: 2.5 | taste: 2.75 | feel: 2.75 | drinkability: 2.5
Wollt Ihr Das Bett In Flammen Sehen
8.1% Double IPA from Get Radical
Overall:
59 / 100
(Decent) 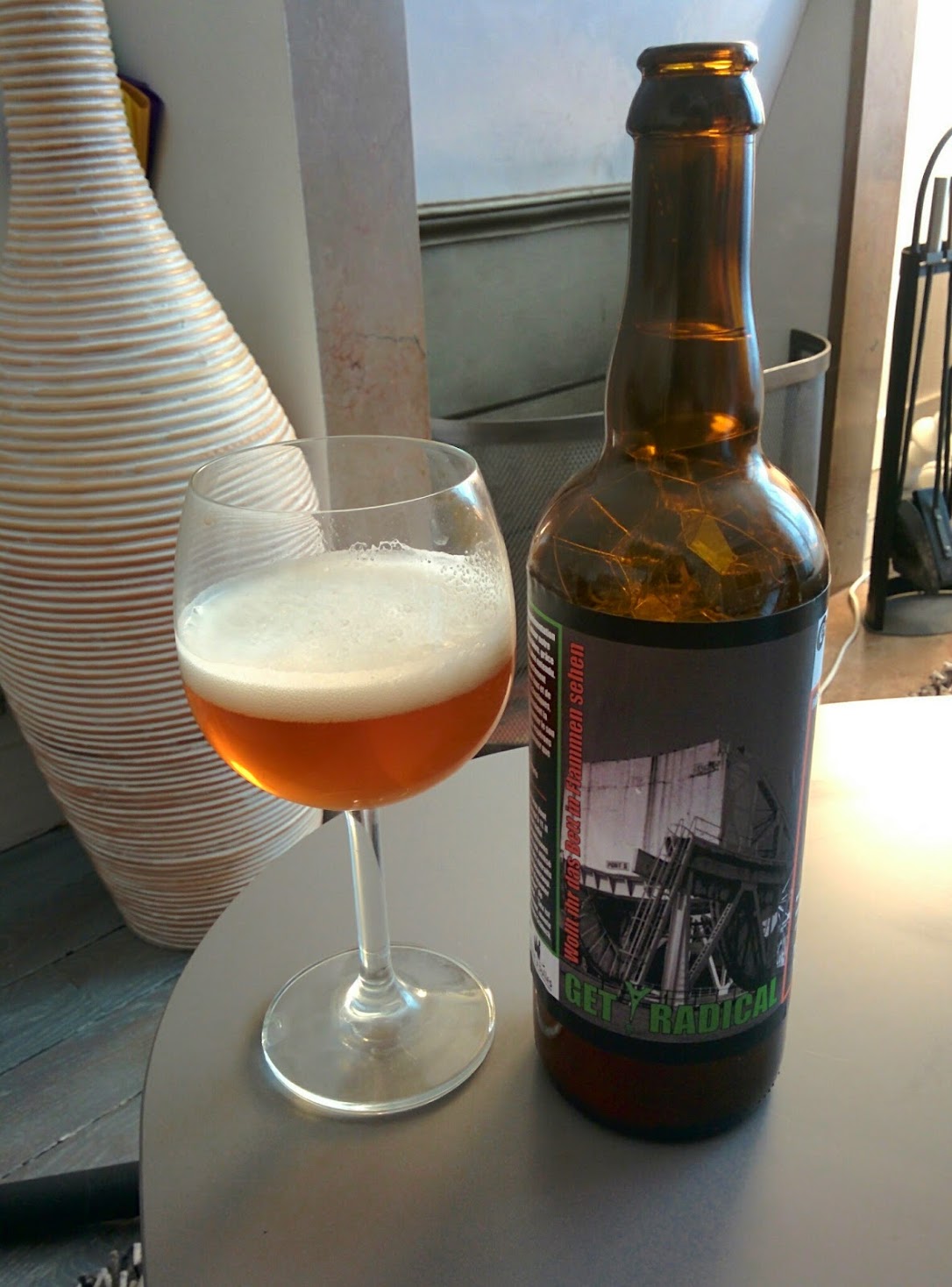 75cl brown bottle purchased from Cave à Bulles in Paris. Brewed by Get Radical at Brasserie Corrézienne and named after a Rammstein song. The key part here is that no hop pellets or cones were used in its brewing, but 100% hop extract. As instructed on the bottle, I was listening to "Wollt ihr das Bett in Flammen sehen" while reviewing it.

Nose is pretty weak, sadly. Thin, candied orange peters out to nothingness, while a faint barley-sugar sweetness sums up the rest. It's a bit of a shame that there's not more going on, but I guess that's what you get when you throw away all of your oils and resins in exchange for pure alpha-acid.

Taste is similarly fairly uninspired. It's clean at least, with a solid hop bitterness through the middle, but no breadth to the hop characters at all. Malt body is extremely muted, but at least it's there in the background to provide some support. It tastes like an IPA with all of the nuance and character removed: the bare bones around which a better beer could be constructed. 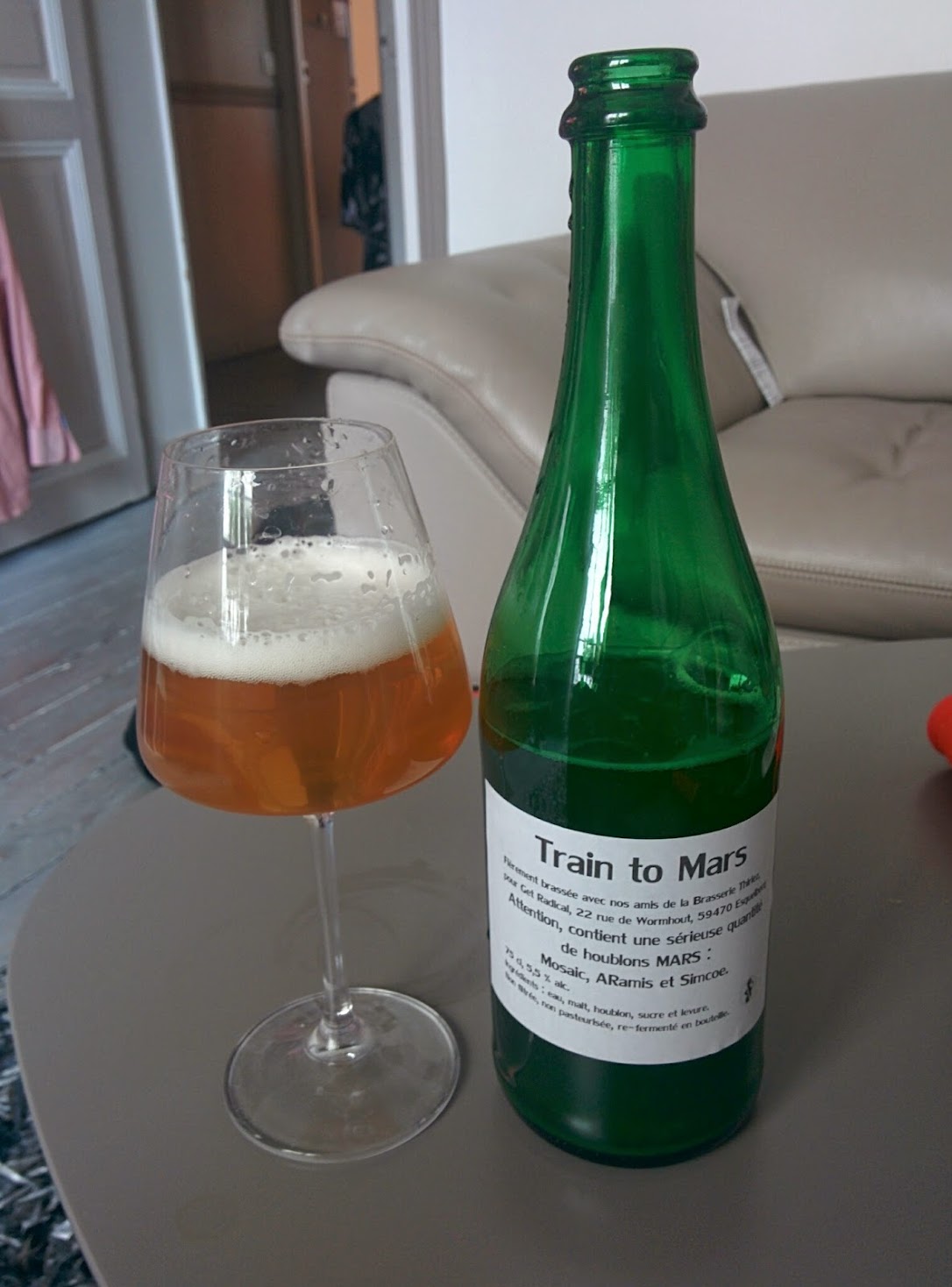 750ml green bottle purchased from Cave à Bulles in Paris. Simon, the owner of Cave à Bulles is also involved in the brewing of this beer. My bottle says 5.5% ABV, but he said that that's a misprint, and it's actually only 5%.

Pours a clear and vibrant golden colour, with a frothy, firm head of white. Lacing is superb, leaving lovely messy streaks and pattern down the glass. Carbonation is very fine, and although there's a lightness to the body, the bubbles linger when tilted. Looks very nice. Very refined and sophisticated.

Nose is great. Big on both the funk and the hops. Initial whiff gives huge, pungent, almost gueuze-like funkiness and a little light-struck skunk from the green bottle (which I'll admit actually doesn't hurt this beer). A little sulphur comes through, but it works in with the funk nicely. But as well as all of this rustic organicness, you have the hops, which are bright and powerful. Mosaic, Aramis and Simcoe are used in this, and I think the Aramis is most noticeable, giving a clean, slightly herbal but fresh green character to the beer. It works well with the funky saison base, giving it a brightness to complement the earthiness of the yeast. Great stuff.

Taste is much, much more simple, which is a shame, but it's perhaps only disappointing because the nose was so good. Clean entry with a thin lagery-grain character like a southern German pils. The hops come through fairly well, giving a crispness to the backbone of the beer. Funk is much more subdued, and the body is very light, meaning that that rich, earthy character is very much curtailed here. Bitterness is restrained throughout, but persists longer than the rest of the flavours, meaning it has quite a bite of hops in the aftertaste.

Feel is crisp and light. It makes it extremely drinkable, even as many of the contrasting flavours seek to overwhelm the senses.

This is great stuff. It's extremely interesting, which always gets me, and it's a lovely weaving together of hops and funk. The aroma is magnificent, which makes everything else seem a little pale by comparison, but altogether it's really wonderful stuff.
appearance: 4.25 | aroma: 4.5 | taste: 3.75 | feel: 4.0 | drinkability: 4.25