75cl brown bottle purchased from a beer distributor here in Australia. Cracked on my 36th birthday.

Uncaps with a snap-thunk hiss and immediately gushes everywhere. Good start, guys. Once it's pourable, I get a hazed golden peach colour in the glass, with an initially loose-bubbled white head that froths as monumentally as the uncapping, and then settles down to nothing. Body has a bit of weight to it, and the carbonation, which minimal, moves slowly through the glass. Looks decent.

Nose is spicy and sharp, with a little stonefruit, and a bunch of pepper. It has a leafiness that might seem herbal or medicinal, but there's always enough sweetness from the fruit characters. It seems balances as a result. There is a little grassy grain character—it's possibly the rye, but it's also quite subdued. It's nice enough.

Taste is pretty similar, but here it's more obvious that the balance is really nicely done. There's indeed plenty of peachy fruit through the centre of the palate, and it cushions the initial punch of spicy rye and yeast. The back dries out, with a very subtle acidity that nicely ties itself to the fruit characters. Finish leaves with a crackle of pepper and crushed herbs. I feel like we've exercised most of the flavour palette by that stage.

Feel is a little flat after it expended most of its carbonation in the initial flurry, but it's backed by a nice smoothness from the fruit in the centre, and a tannin-like dryness in the finish. 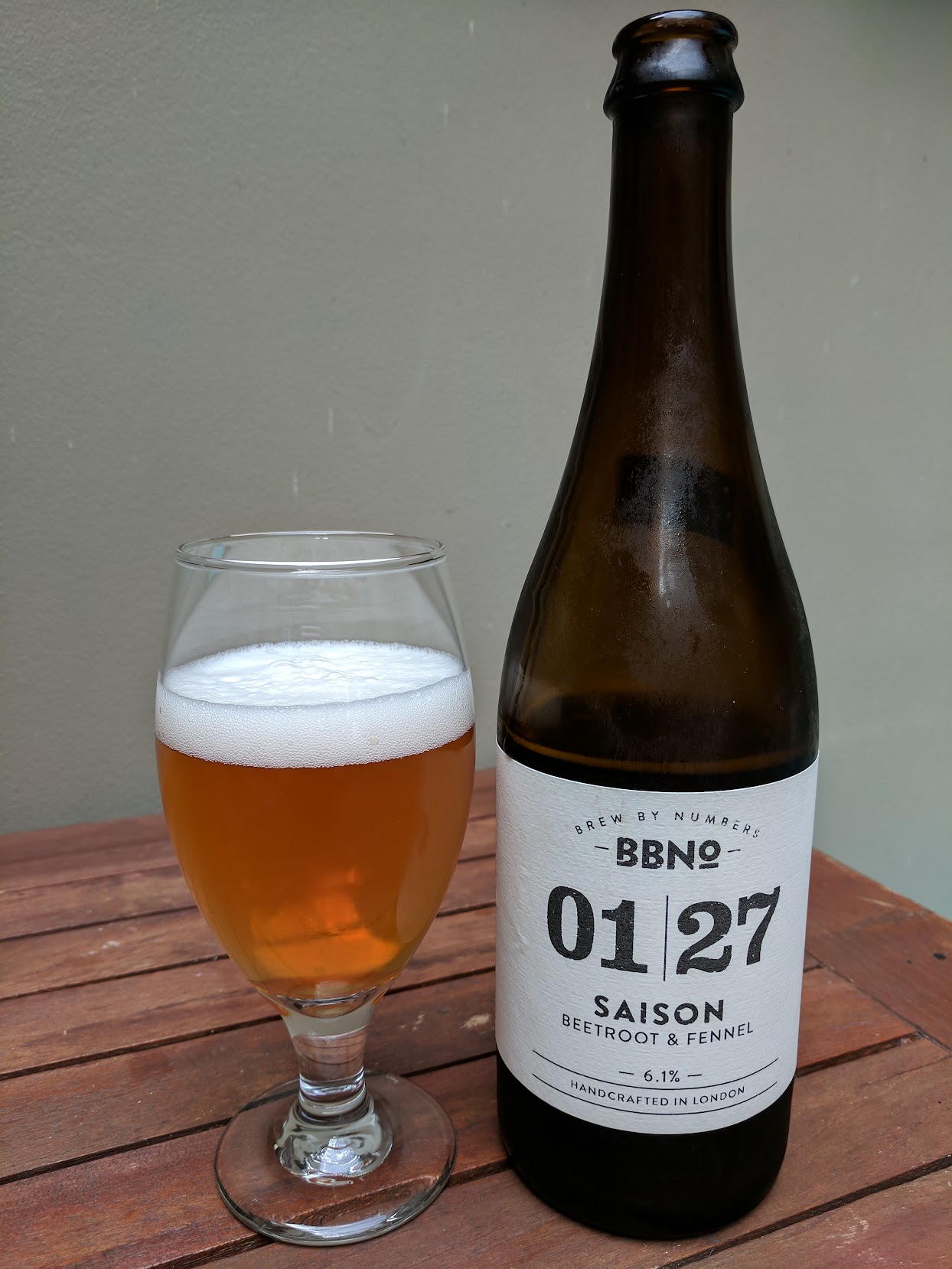 Pours a rose-tinted golden colour, with a frothy white heat, staying insubstantially as a gauzy ring. Minimal lacing. Carbonation is swift and coarse, rapidly moving through the light body. The colour is nice, otherwise, it's a bit lacklustre.

Nose is slightly tart and crisp, with a definite vinous character adding a fragrant acidity. Under this though is the undeniable hint of dill and fennel, which add a semi-sweet anise to the mix. There's not much in the way of saison outside the acidity, and indeed, this only emphasises a thinness, turning slightly metallic and blocking the vain attempts of the bready malt. Hmm.

Taste is similar, or slightly worse. Here, the acidity creates a hole in the centre of the palate; an emptiness that has nothing to fill it. But the acid doesn't stick around either. Despite a punchy entry with a hint of tart, slightly peppery crispness, it evaporates quickly, leaving the back-palate to a tired refrain of almost bitter aniseed. The centre is flat and rubbery, like you get in a poorly made saison.

Feel is light and prickly. It's thin in the mouth, but with a series of carbonation stabs in the centre of the tongue. 330ml brown bottle purchased as part of a bulk order with some workmates. Bottled in January 2016, so over a year old.

Pours a rather hazy deep golden colour, with a coarse, crackling head of pure white, fed by some swift carbonation. Body is quite light and clearly well-attenuated. Looks pretty decent.

Nose is relatively pleasant. There's a pleasing savoury character that comes through from some combination of malt and yeast. The hops have dropped a little, but that's not unexpected for a beer of this age. The booze is sharp though, and gives a slight solvent character, softened somewhat by the Belgian yeast presence, which gives some rounded, aromatic sweetness.

Taste is similar. It starts out with a very pleasant savoury malt structure, with sweet and toasty notes and a slight bite of carbonation. On the back though, the booze is very prominent, with a sharp, metallic note and a slight astringency. Bitterness is somewhat controlled, but it also doesn't hide some of the more challenging boozy notes either. Feel is light-bodied, but quite heavy on the carbonation. 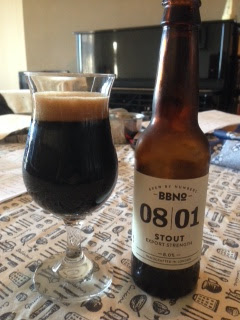 Bottle gifted me by Jez, enjoyed by myself.

Pours a very dark coffee colour, with a glint of brown at the edge. Head is beige, forms a gorgeous reverse cascade upfront then settles down to a thin crown with some ruffles of lace around the top. Pretty cracking looking stout.

Smells roasty, with some bittersweet chocolate on there and a slight metallic tinge that isn't so desirable. Fairly dark, roasty, bitter. Touch boozey, maybe some brandy.

Taste is more cohesive, with some roasty notes throughout, but plenty of sweet caramelised grain and chocolate on the mid-palate. Spice on the mid-front and a slight peppery spike towards the finish. Finishes quite clean but a hint of coffee bitterness that lingers lightly. Well-constructed stout palate; sweet notes throughout but a nice toasty, stolid bitterness to finish.

Decent body with a slight carb texture late and a hint of boozey warmth late. Not bad. 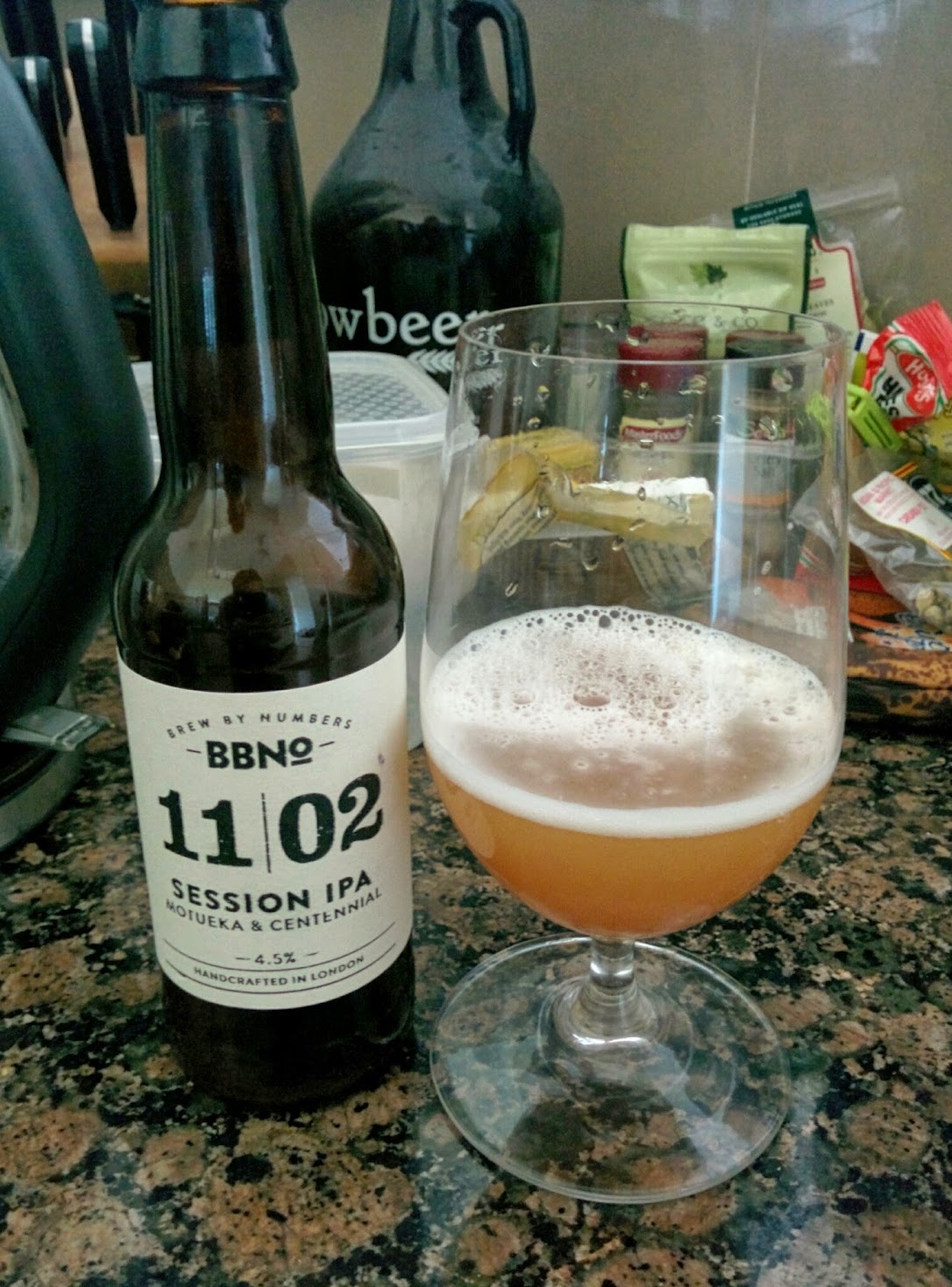 330ml brown bottle purchased from the brewery in Bermondsey when doing the mile. I brought this bottle back to Sydney, Australia where I shared it with Sam & Rich.

Nose is pleasant: definite citrus characters giving a fragrant, almost acidic tone to the aroma. Slight husky nuttiness comes through as well, more of a savoury grainy malt character than any real sweetness. Hops are the most dominant part though, and they're done fairly well.

Taste is very light, but pleasant enough in its way. Very thin body delivers the "session" quality, while the malt is definitely very savoury, providing an almost umami-like biscuit character underneath everything. Slight weak fragrant hoppiness sits on the back and makes it slightly bitey. Not bad.

Feel is very light. It's not unexpected, but it doesn't help a lot overall. 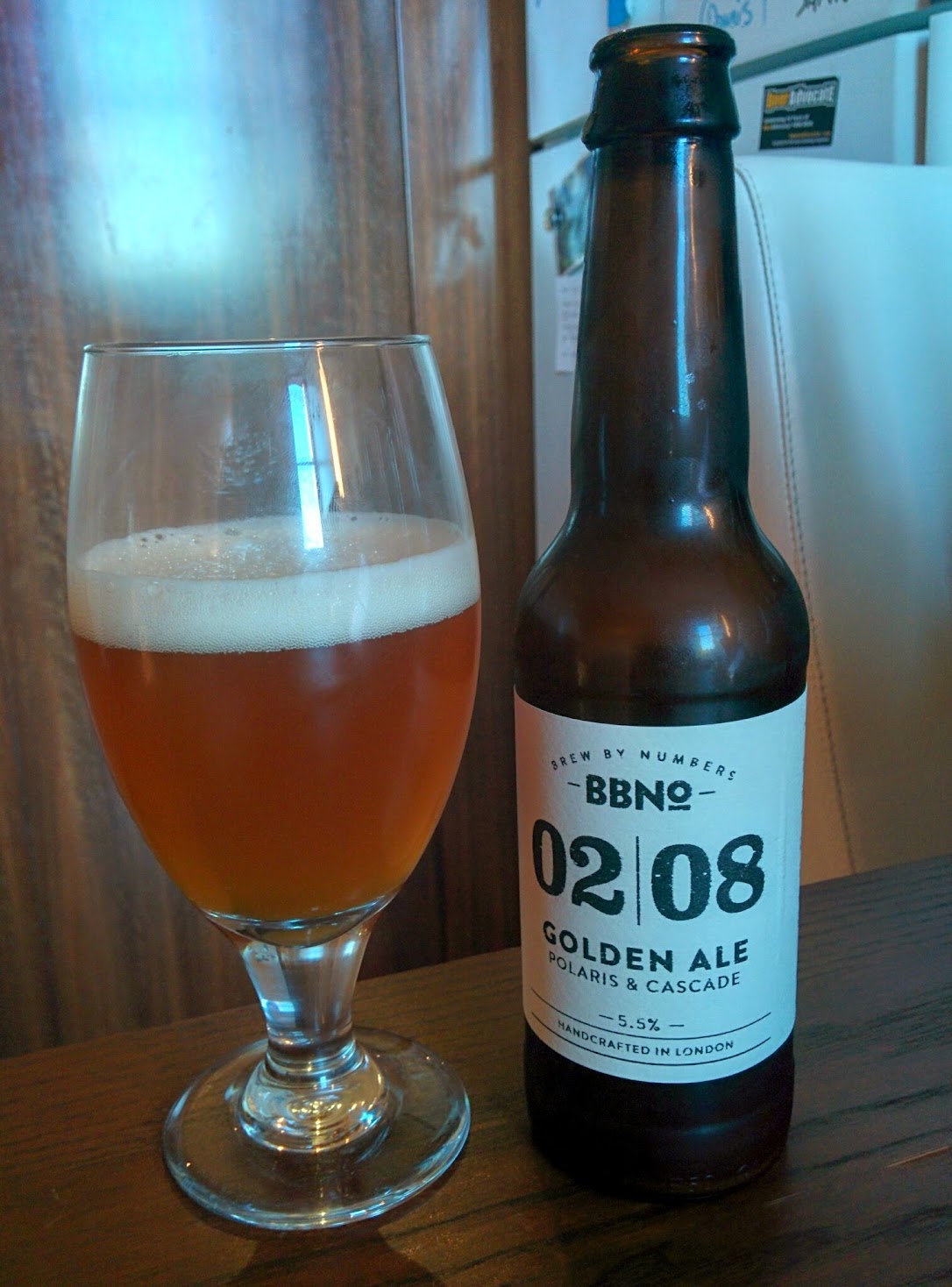 330ml brown bottle purchased from the brewery in Bermondsey.

Pours a fairly hazed bright golden colour, fairly deep and burnished. Head forms a frothy, persistent and solid cap of white that leaves some streaks of foamy lace as it goes down. Carbonation is fine, but rushing through the fairly light. Body. Looks good overall though.

Nose is very nice, bright clean hoppiness, with the Polaris providing an unusually vegetative or herbal note to the mix, a little bit like freshly chopped silverbeet. Malt is fairly neutral, but does provide a bit of surrounding basis. Overall, solid stuff.

Taste is also pretty clean, pleasant and well-balanced, with a fruitiness coming from the Cascade hops that sits nicely alongside the fresh, slightly grainy malt. Rustic, slightly dusty bitterness towards the back cleans it up, providing a dry, powdery feel in the finish. Really nicely balanced, and really very quaffable. Very nice stuff.

Tried on-tap at the Brew By Numbers brewery on the Bermondsey Beer Mile.

Pours an opaque black colour, with a hint of colour at the edges. Body is very decent, with very fine carbonation. Head is a pale mocha colour, forming a foamy, firm and persistent crest. Lace forms in specks and gargoyles. Looks good.

Nose is toasty with a slight creaminess. Hint of spice, mint and anise perhaps with a dollop of vanilla ice cream on the top. It's a bit light in weight, but overall, it's pretty good.

Light entry on the palate, smooth and a little thin. Light cacao comes through and some spice notes. Rubbery chocolate. The finish leaves little behind. It's smooth but weak—almost feeling watery by the time it reaches the back. This means it cleans out nicely at least, but it could really afford to be bigger. Feel is fairly smooth throughout, with a rubbery texture again. 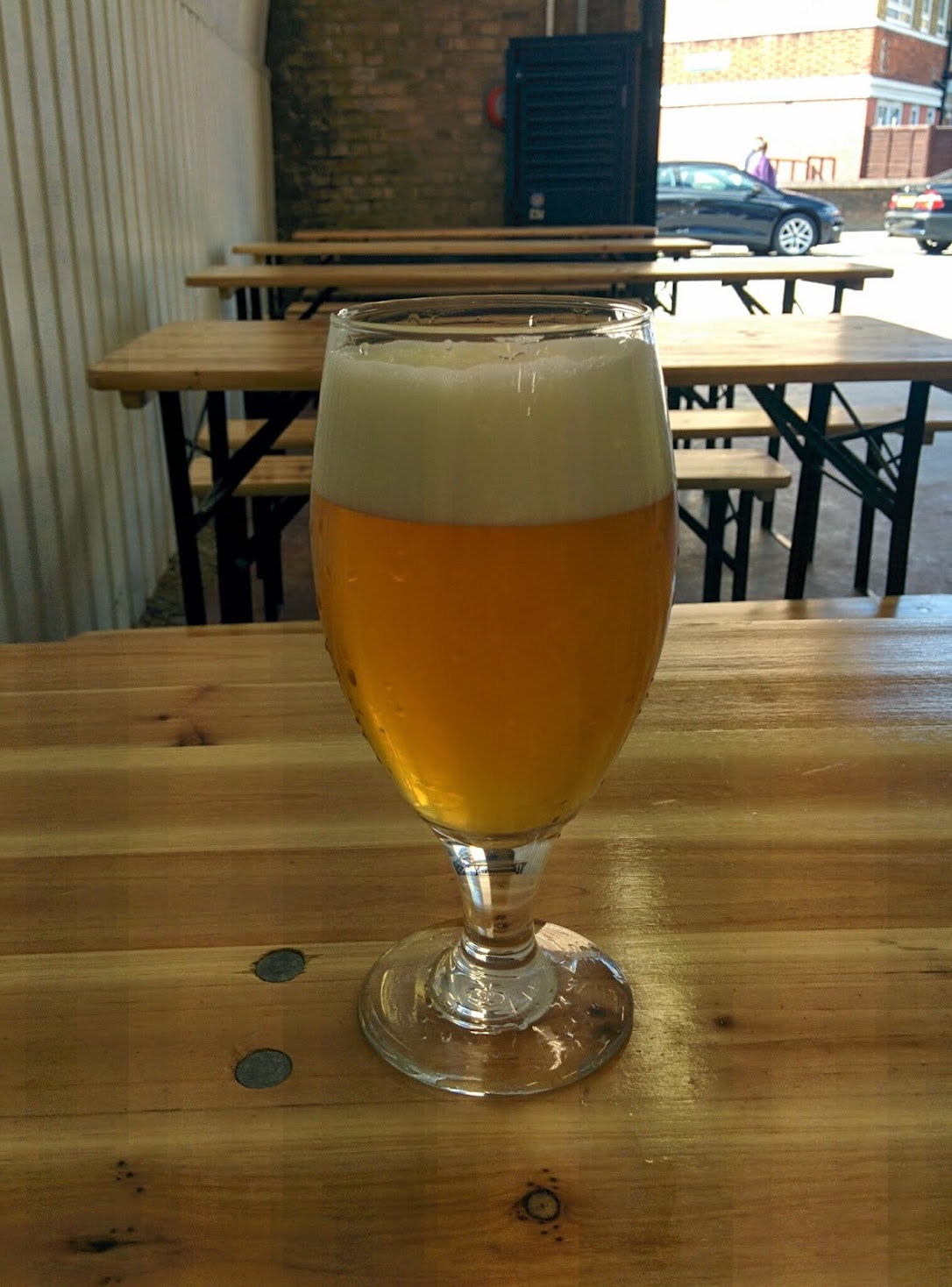 Tried on-tap at the brewery on the Bermondsey Beer Mile. I asked what they recommended from their range and they said "The IPA is tasting out of this world right now".

Nose is clean and bright—dry hop notes clean and slightly herbal. Amarillo is prominent with its slightly dank fruitiness, but livened up with a bit of crisp citric Citra. Quite lovely. It's a bit lighter than it could have been but that would just be making a great thing even better.

Taste is awesome. Clean and smooth on the entry, laying down a nice neutral malt base. Here a bright, sunny West Coast IPA aroma builds up giving complex fruit and pithy citrus. It releases hop fragrances like little pops of deliciousness. Gorgeously clean on the finish, light and crisp without too much bitterness.

Feel is smooth but light: it's an almost perfect balance.

Wowee! They weren't kidding when they said it was tasting "out of this world". This is a cracker of an IPA. Super drinkable and refreshing with bags and bags of character—it would give most Californian IPAs a run for the money, and would probably crush all but the best of them.
appearance: 4.5 | aroma: 4.0 | taste: 4.5 | feel: 4.5 | drinkability: 4.75