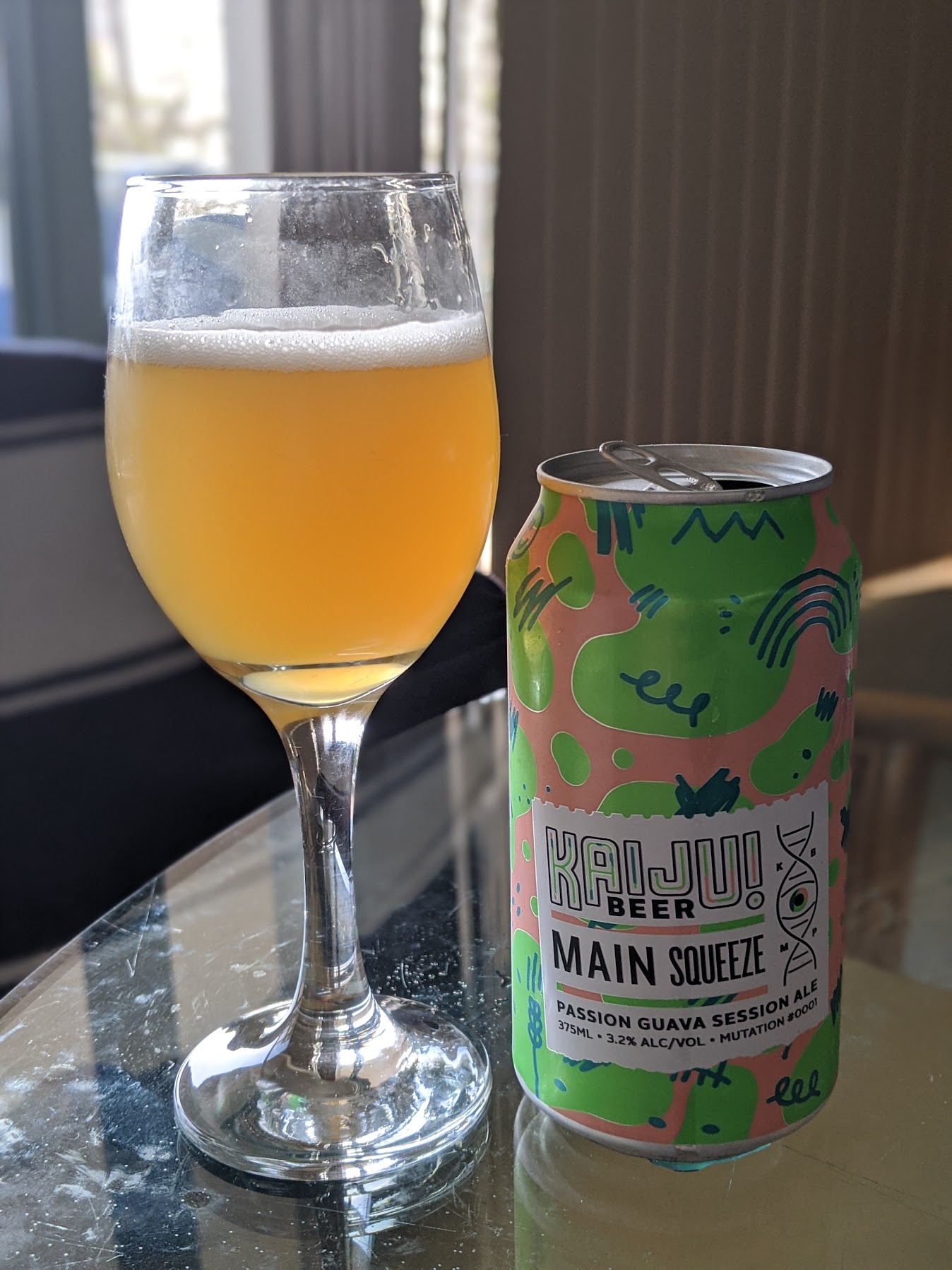 330ml can purchased from Slowbeer by my brother, given to me for Xmas 2019.

Pours a very hazy but bright mango yellow-orange colour, with a fine rim of persistent white bubbles forming the head. Some minor streaks of lace, but otherwise it sits in the glass looking like juice. Minimal carbonation. Looks like it has more weight than you expect for 3.2%, but there may just be loads of juice left post-ferment.

Nose is almost purely guava juice. That's certainly pretty sweet, happy and enjoyable, but it's also lacking subtlety and complexity. No, maybe there's a bit of passionfruit as well, giving almost a dank post ferment aroma to it.

Taste makes me like it a bit more, because it's lighter and spritzier than just drinking pure tropical juice. As a result, although the aromatics are still there from the nose, it feels more like beer and less like carbonated fruit juice. Clean back palate leans into a note of soda and very faint light malt. In the end it feels like beer, but it's a close thing.

Pours a pale orangey-yellow, with ridiculously voluminous head that takes up most of the glass when first poured. Off-white, sparsely webbed bubbles that sinks nicely on top but doesn’t have a lot of substance to it, as you’d expect from the style I guess. Otherwise looks good, but the head could definitely be toned down.

Smells delightful. Fresh, fruity and summery, with pineapple predominating with a thin spike of citric tang. Passion, mango and some floral botanicals around the edges. Not a whole lot to it otherwise; there doesn’t need to be, it’s unpretentiously tropical.

Taste kicks off very quickly with that big juicy tropical character that’s all over the front of the palate. Pineapple, passionfruit, mango and peach, with a hint of banana towards the mid. Develops so that you know said character is all just late-hopping as they turn fairly bitter late-mid and then continue, somewhat citric but also woody and floral in their bitterness so it’s still fresh and all pretty clean. Slight biscuity overtone to the back which is really the only hint of malt, otherwise it’s all florals and fruit. Really nice summer quencher.

Mouthfeel is a little tingly, maybe a touch prickly as well, with a pinch to the bubbles as they go down. Otherwise thin, insubstantial, as it should be. 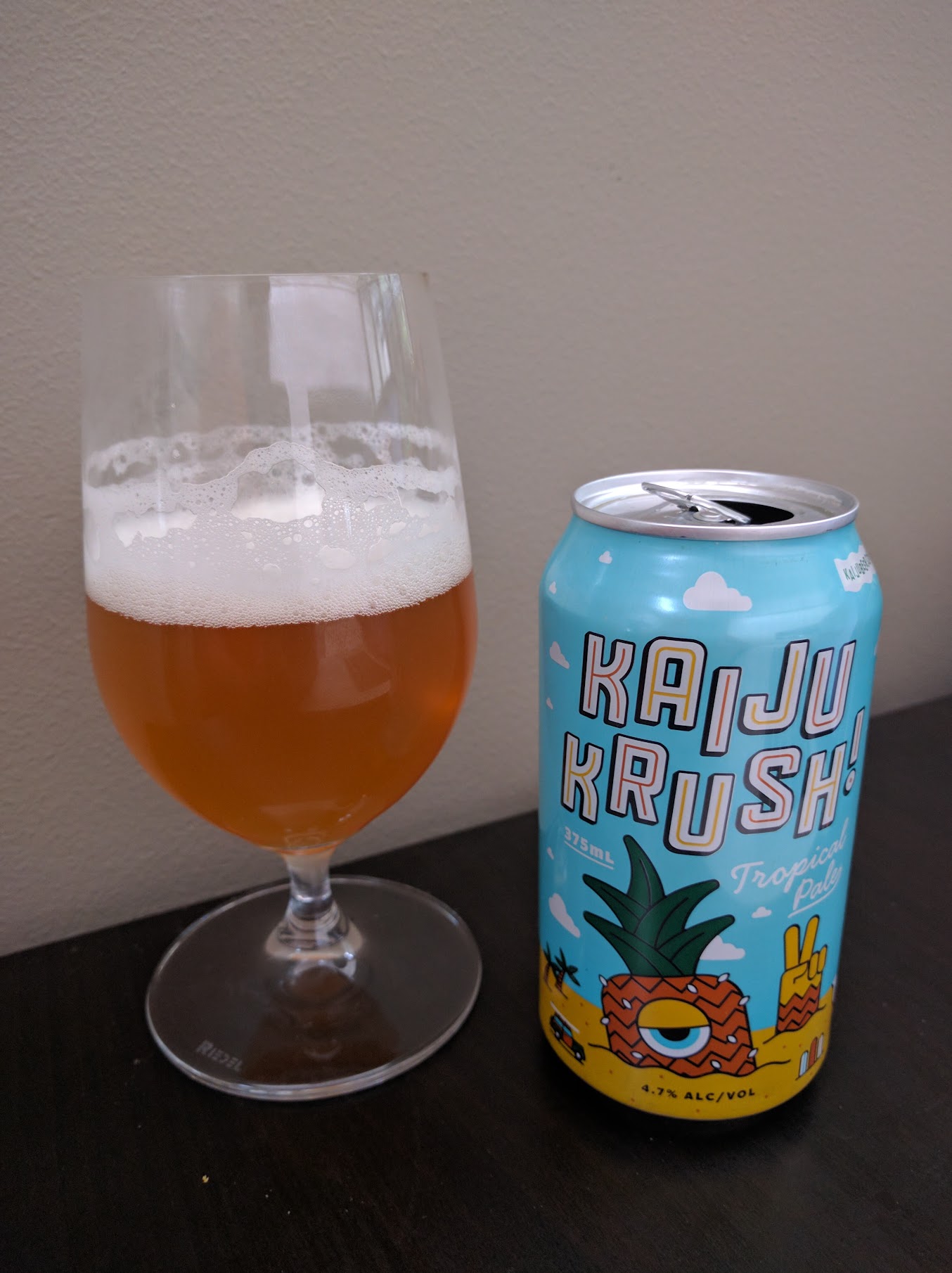 375ml can purchased from Slowbeer in Fitzroy.

Pours a hazed pale golden colour, with a fairly thick, frothy head of white that leaves loads of sudsy lace. Carbonation is mild, and streams swiftly through the glass. Body is fairly light. Looks decent enough all up.

Nose is great. Big, bright, punchy fruit, crackling with a sherbetty sweetness. It's like sharp pineapple zapped with the powder from a Fun Dip. There's a slight bite of funky white pepper as well as something a little more primal and carnivore. It's a good nose.

Taste is pretty good. Pleasant lightness to the palate allows the beer to stay quite fresh and drinkable, but the hops are still present, meaning they take on a slightly too prominent position in terms of the bitterness. These leaves the back with a slight iodine twang as the bitterness lingers. Around the front and the edges though, it's all smooth, sweet, flat fruit notes, which work well.

Feel is pretty squishy. It feels light, but there's a gumminess that comes from the sweetness that seems to bulk it up a little.

Smells hoppy; quite citric, but also very malty. Cake battery, citrus, notes of caramel. Smells like it should be hoppier, it's actually quite malty overall. OK though.

Taste is quite dark and roasty, with some resinous character. Malty sweet with caramel toffee, touch of vanilla, then hops with grapefruit, lemon and a touch of lychee. Finishes quite resinous with roasty notes mingling with hop oils. Very pleasant though; nice character overall.

Full, a little bit of texture, quite a pull on the back.

Smells like an IPA, yeah. Caramel malt, with big tropical fruity notes - mango, passionfruit, pineapple and apricot. Hops have a sharpness to them but it's a nice mix.

Taste is predominantly new world hops. Big tropical character, with passionfruit and pineapple very noticeable. Develops some nice Belgian notes towards the back, with phenolic characters, touch of pine wood, and some resinous character together with a grapefruit bitterness on the back. Quite bitter, really. Pretty tasty.

Body is a bit thin, and the carbonation comes through very sharply as a result. Touch of warming alcohol.

Not a bad drop. The characters are certainly on point.
appearance: 3.5 | aroma: 3.75 | taste: 3.75 | feel: 3.0 | drinkability: 3.5
Where Strides the Behemoth
10.5% India Black Ale from KAIJU! Beer
Overall:
76 / 100
(Excellent)
Just came across this old reviewing sheet from GABS 2014, where I first tried this beer. The reason I hung onto it was because I was using BeerAdvocate for my reviewing at the time, and I would have had to enter an "Address" for KAIJU! beer, which at the time was not forthcoming from the interwebs. So while this is a very, very retroactive review, I'm confident my notes were comprehensive enough at the time to cover any gaps in my memory.

Smells fruit salady, probably citra-hopped? Mandarin, passionfruit and pineapple, with mango giving a big sweet character. Tangy and sweet, and a touch of bitterness. Could use more darkness but nice otherwise.

Taste has more roasted character on it, just the way I like it. Cocoa character to the malt upfront, then hops take hold with passionfruit, and mango adding a nice complementary sweetness. It's very hop-driven and tangy but without a lot of bitterness from the hops. Nice India Black Ale notes, though, with complementing roast and hops character. It's my kind of beer, just bitter enough without drawing too much attention to it.

Alcohol is slightly warming, with a full body. Not bad.

Pours a pale gold, a bit cloudy. Head is lacklustre: sinks quickly to foam with some bubbles on the top. Lace is OK.

Nutty aroma, and a hint acidic. Maybe some funk but also lemon/orange zest with walnutty malt. Grain, maybe a touch off but OK. Just not sure what its intentions are.

Taste is a bit more citric, especially on the back. Funky hint upfront, then gets tangy midway and zesty lemon and grapefruit pith on the back. Not too strong, but verges on heavy puckering bitter territory. Bit nutty as well from the malts that are possibly British in nature? Not bad overall, but I don't get a huge lot of character or nuance.

Sizzly, quite a lot of pull. Not nearly enough body. 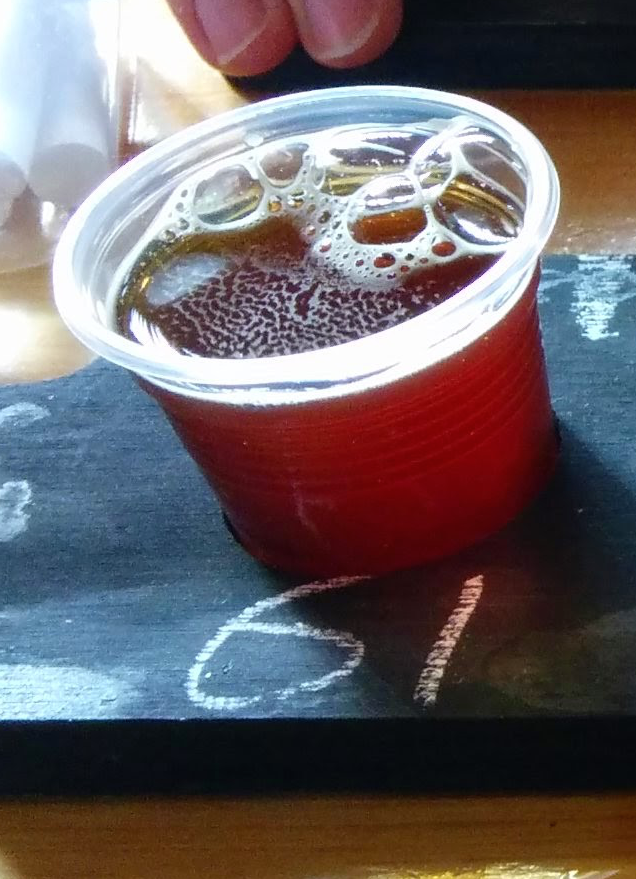 Pours a solid amber colour, hazy and glowing in the glass. Body is solid. Head is an off-white beige forming a fine ring that leaves some mild, but long streaks of lace. Carbonation is very fine, almost powdery when tilted. Looks very good.

Nose is great, with a very pleasant blend of sweetness and hops. It gives notes of strawberry cream set against a slight nutty malt. Hops are fruity, giving mostly nectarine and a little dark berry. It's very nice indeed.

Taste starts out well: hoppy with a slight savoury grain note on the front giving a mild toasty quality. By the mid palate though a very harsh booze character comes through. You can taste it. There's not enough body to mask it either meaning it rips apart the promise. Back is slightly astringent, but finally there's a hint of sweetness to smooth it out. Aftertaste has some bitterness and a touch of bush spices.

Feel is hot with booze and tingling with the final dose of bitterness.

Smells fairly malty upfront, caramel touch to it with a slight nuttiness as well. Citric hops mostly, with a US west coast edge but a bit of NZ sweet stonefruit hops that give a slight cloying edge. Fairly nice overall though.

Taste is caramel grainy upfront, again. That melange of hops, with American and NZ in equal measure throughout the back of the palate. Slightly phenolic on the back, maybe a touch medicinal with that resinous/sweet mix. Not bad.

Touch of booze on the back, but a nice full body that pads out any hop rawness nicely.

Smells like an IBA. Roasty and chocolatey malts underlie it all, but a big resinous hop aroma as well. Lots of hop oil, touch of apple and citrus but mostly just dank and moist woody hop notes. Touch of cinnamon. Bit of everything.

Touch of darkness throughout. Starts quite malty, gets spicy and actually somewhat harsh midway. Roasty, bitter with masses of resinous bitterness late-mid, some citric notes but just a big hop oil note mainly. Decent roast and some nice chocolate sweetness could be bigger. Not bad but has that dank note in some IPAs I don't like so much, and not hugely balanced between dark and hoppy.

Full, bit too much pull from the hops.

Pours a deep, proper black colour, with a very frothy and thick head of pale beige that stays a little bit overdone all the way done: fed as it is by some fairly aggressive carbonation. Minimal patchy lacing. Body is fairly light. Overall, it looks decent—the colour is at least a good depth for an India Black Ale.

Nose is pleasant, if a little subdued—perhaps because it's not super, super fresh. Still, there's a pleasantly constructed broad hop character through it matched with a mild chocolate character that adds a hidden depth. Slightly peppery note comes through as well. Overall, pretty good.

Taste is very good: there's a really nicely spliced together roast and hop character that allows the hops to be sweet and the malt to be bitter—it's perhaps this switching of characters that allows them to meld so well. We get some fruity, aromatic characters from the hops, and a firm coffee-roast bitterness from the malt. Together they give off characters of concord grape and a fragrant nutty almond note as well. It's really very pleasant and flavoursome, but with lots of coherence, and firmly in the structure of an IBA.

Overall, this certainly is very good stuff. It may have taken until the palate for all of this to be quite that noticeable, but once it gets there, it makes you realise just how good it is. I particularly like that it doesn't use the darkness as a purely cosmetic element. There's plenty of roast here, and you want that in a good IBA—better yet, in this beer they've made it a coherent blend with the hops, and I really like that.
appearance: 3.5 | aroma: 4.0 | taste: 4.25 | feel: 3.75 | drinkability: 4.0
Metamorphosis IPA
6.7% American IPA from KAIJU! Beer
Overall:
68 / 100
(Solid) 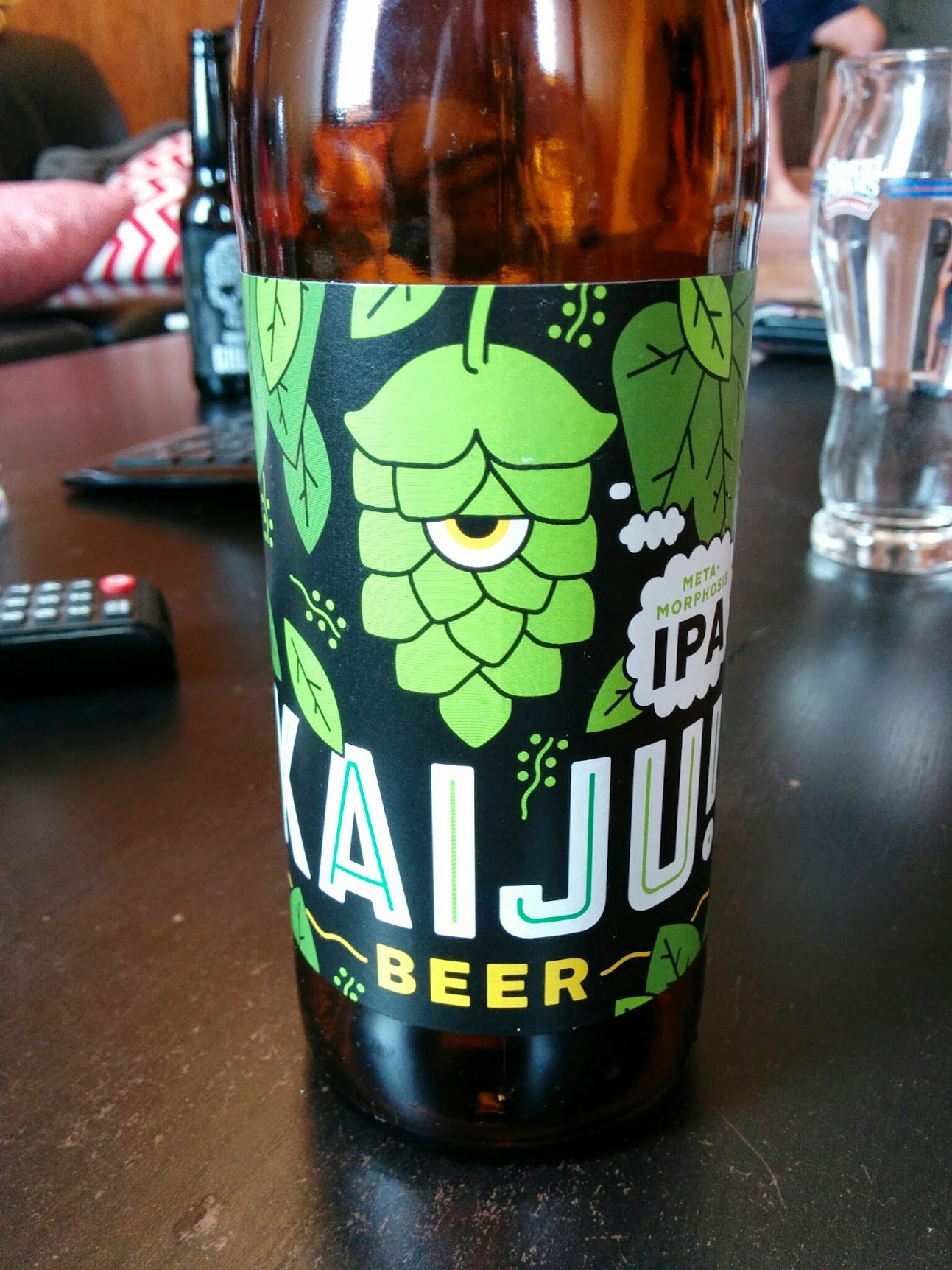 500ml brown bottle served to me blind with Sam and Rich courtesy of Chris during a brewday.

Pours a very clear pale amber hue, with a thick and full, frothy head of off-white that leaves sticky and extremely credible lacing. Body has a little weight to it, but less than you'd think, and the carbonation shimmies away when swirled or tilted. Looks pretty good though.

Nose has pleasant sherbet characters, quite light, and not overtly hoppy. There's a toffee sweetness underlying a lot of it, which is rather pleasant. It's subtle in many ways, but feels quite fresh and fairly bright. I like it fine.

Taste is a little better. Here the toffee character is more pronounced, and provides a very pleasant undertone to the other stuff that's going on. Atop of this, is a slightly herbal, almost English bitterness through the centre, that leaves some organic tones and something like freshly picked rosemary. Finish is lingering with bitterness, but quite clean. I like it.

Feel is silky, but with a bit of weight towards the back.