Tried on-tap at the brewery in the north of San Antonio.

Pours a pleasant golden hue, slightly hazed as though unflitered, which is fine by me. Head is relatively fine, but minimal, staying as a slight ring and leaving good lagery lacing. Carbonation is remarkably minimal, which is certainly something of a surprise, but looks fine when agitated or tilted.

Nose is solid for the style. German grain comes through, slightly dusty and little sweet. Maybe some slightly vegetative noble hops, but they're pretty much lost. It catches the right flavours at least. There's perhaps not much else to it, but it's stylistically appropriate.

Taste is similar. Firm, German grain character which verges towards the sweet, but with a slightly hazy quality which prevents it from being cloying. Mild bitterness on the back is restrained, but coherent within the body of the beer and again is pretty suitable for the style. Clean finish with a husky note in the finish.

Feel is clean, but a little heavy. It's not bad, and certainly not outside what's suitable for the beer.

Overall, this is pretty solid for the style. It's not a really exciting beer on it's own, but it makes sense for what it is. It's this sort of brewing that makes me believe in a brewery—more so than having fantastic beers at the fringes of styles. So after this beer, I certainly believe in Freetail.
appearance: 3.75 | aroma: 3.5 | taste: 3.75 | feel: 3.5 | drinkability: 3.75
Thanatos
7.2% American Imperial Stout from Freetail Brewing Co.
Overall:
79 / 100
(Excellent)

Tried on-tap at the brewery in San Antonio.

Pours a deep, brown-black. but certainly not as heavy or dark as it might have been. Head is a pleasant yellowish-beige that's quite fine and persistent. Good sheeting, thin lace. Carbonation is fairly fine and slow, despite the lighter body. Looks good.

Nose is pleasantly perfumed with an aroma like rose or something else floral. Then, the booze comes through giving it a bit of sharpness. This is melded with a little roast and some gripping sweetness. Mostly, it's heavy with that perfume though. I like it.

The taste is very good. There's a nice toastiness to it, but it's quite dry, not overly sweet, and free from booze cloy. Instead, there's some mild buttery notes to give is some smoothness, and it stays quite clean, with the roasted notes floating around the edges. There's a hint of some mild spice towards the back, with a long but smooth linger.

Feel is light, but suitable, and it helps match up with that rather accessible flavour profile 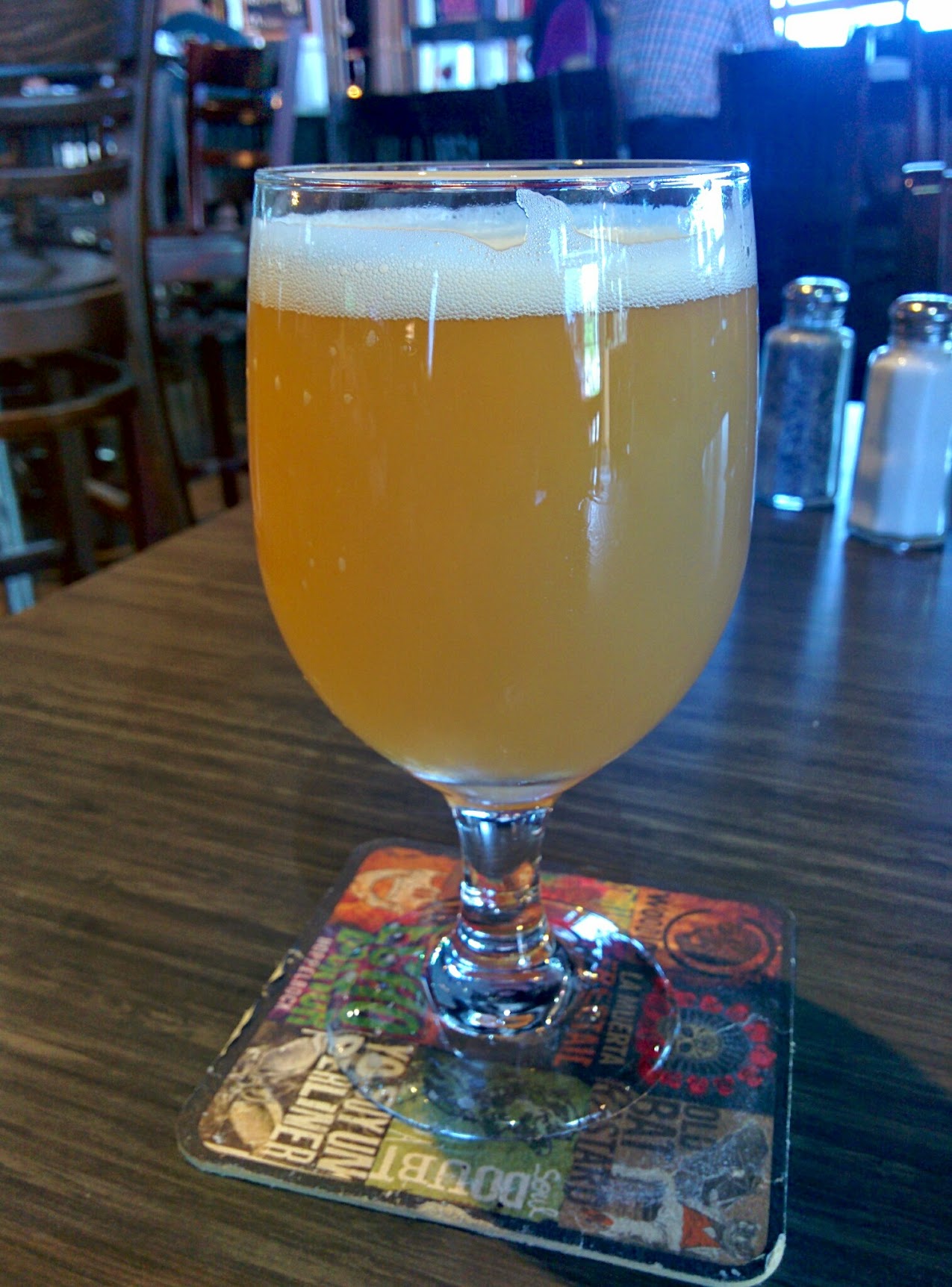 Double rye witbier, apparently. Sampled on-tap at the brewery in the north of San Antonio, TX.

Pours a deep straw colour, perhaps taking on a little more colour than that—it's genuinely pale like a with, but with suggestions of orange in the deeper parts. Body is thick, and the head is full, settling out to a white, fine ring. Carbonation is minimal, but very languid when tilted. Lacing forms in streaks. Looks good.

Nose is a little mild—some orange skin character comes through, along with a oddly dusty note, and maybe a little uncooked flour. It's not very potent, but it's decent enough.

Taste is a little better. Here, there's a proper rounded character—slightly sweeter, with a bit of booze to accentuate it. Still some witbier tones to it, but really nothing sharp. It's very smooth on the back, slipping into a clean, long finish with no harshness or bitterness. I feel caressed even though the beer is pretty boozy.

Feel is also pretty good. It has a bit of weight to it, but mostly it stays smooth.

Tried on-tap at The Friendly Spot in San Antonio, TX. This is brewed with coffee from Local Coffee, which is (unsurprisingly) a local San Antonio coffee roaster.

Pours a lovely deep brown colour with some good weight behind it. Head is appropriately coloured like espresso crema, and forms a good firm film across the top of the glass. Lace is a nice sharding drop of vertical streaks. Carbonation is very fine. Looks really great.

Light aroma with dry coffee tones predominant with a slight dusky malt character coming in underneath. It's slightly gritty, to be honest, but the roast character is smoothed somewhat by a little sweetness. It's pretty decent.

Light entry on the palate, with a surprising crispness from the coffee. This mellows once the malt comes in, with some smooth roasted characters on the mid palate, aided by some sweetness and booze. Finish cleans this up though, leaving the back toasty and dry. Some coffee lingers with a bit of fruit—almost a suggestion of acidity. Aftertaste has a very mild cling of coffee to remind you what this is all about.

Feel is very solid, but clean, with a bit of weight behind it.

Overall, yeah, this is pretty decent. The smoothness and the weight of the body help it go down even while they provide what I guess are the more challenging elements. Good beer drunk under good circumstances.
appearance: 4.5 | aroma: 3.5 | taste: 4.0 | feel: 3.75 | drinkability: 3.75