Bottle served to me by Jez.

Smells malty but a good belt of fruity hops. Quite sweet, marmaladey really, with tangerine, orange and slight pineapple. Yeah jammy, a bit too sweet maybe, not enough cutting.

Taste is decent, a little more dry on the back with resinous hop character as well. Starts sweet with that marmaladey apricot and orange flavour. Develops some sharpness late-mid, then finish is spicy, piney and slightly resinous. Nice dry finish, with a decent linger of dry spice but the malt and sweet fruity hops don't hang around.

Mouthfeel is decent; smooth, a little bit flat though so it seems mildly stodgy.

Drinks decent; good finish to a decently tasty fruity hoppy beer. Jez reckons this bottle might be a bit old, which seems reasonable. It still tastes pretty good though, which to my mind is the mark of a good IPA; there's good beer structure behind the hop flavours.
appearance: 3.25 | aroma: 3.5 | taste: 3.5 | feel: 3.5 | drinkability: 3.75
Duet
7.0% American IPA from Alpine Beer Company
Overall:
65 / 100
(Solid) 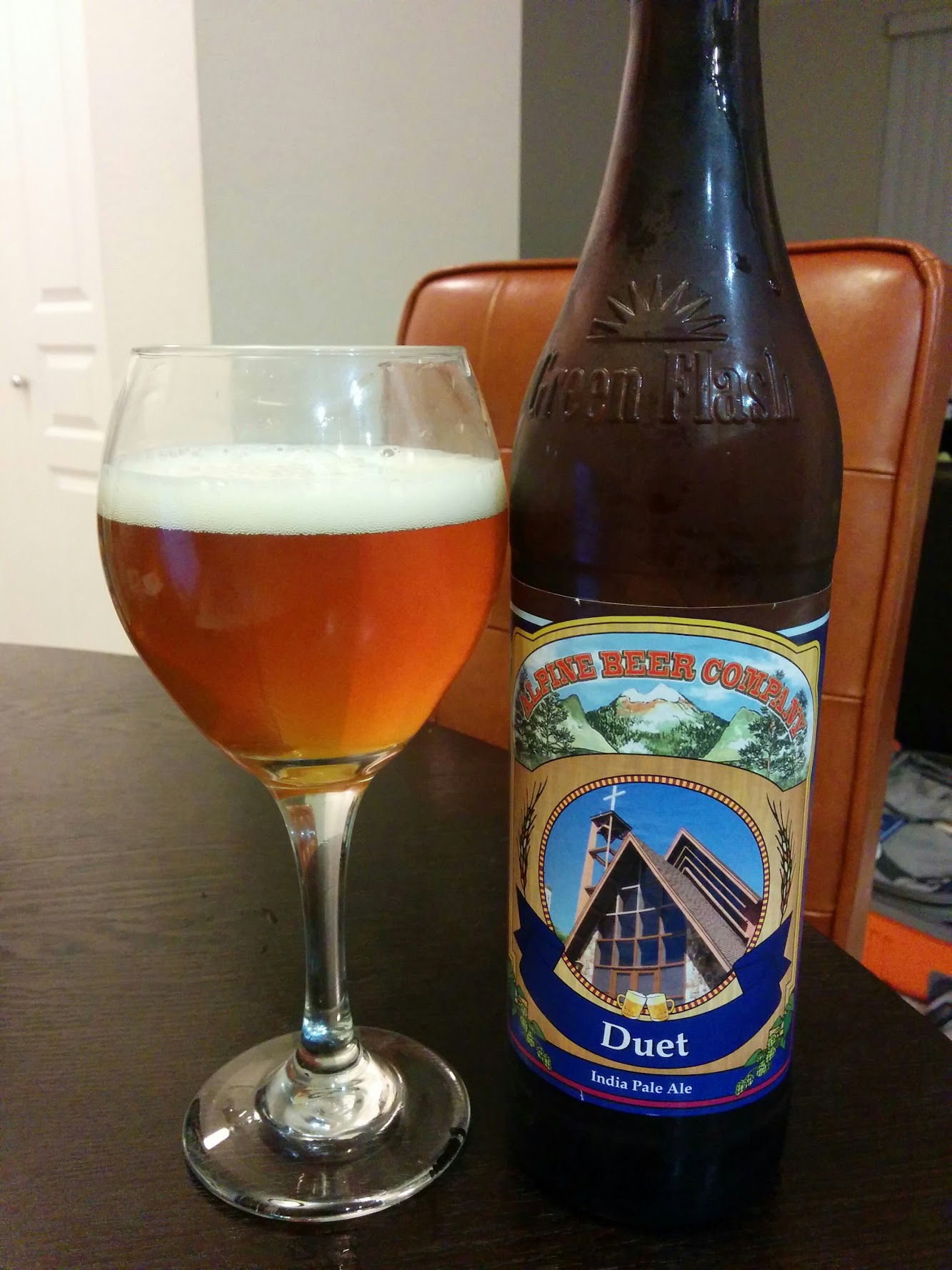 22oz brown bottle, which for some reason that eludes me is embossed with the Green Flash logo. Purchased from Ales Unlimited in San Francisco. Freshness date of 17 March 2016.

Pours a very mildly hazed deep golden colour, with a flimsy head of white that becomes a mesh of coarse bubbles. Lacing forms in pleasant discrete streaks. Carbonation is very fine, and the body has enough weight to make the bubbles seem pretty languid. Looks solid.

Nose is intense—resiny, pithy, engorged hop character, that extends itself into the realm of sticking your nose into a container of hop pellets. It's towards the grassy, organic side of things as well, rather than the more mild or rounded citrus tones you often find in a Californian IPA. It feels almost like it's paint-stripping your nostrils—in a good way.

Taste is only really okay, unfortunately. Hops here give a rather pronounced grassy/hay-like quality that bucks up against the malt, making it taste a little tired or oxidised. As it warms, this subsides somewhat, leaving instead a more pleasant gloss of marmalade and stewed orange. Back is smooth and light, with a well-targeted bitterness somewhere between "actually bitter" and "suggestions of bitterness".

Feel is thick with the sweet citrus notes, and really feels like it's lacking carbonation. A bit more might enliven it a little, especially given the citric characters.

Overall, this is decent enough, but given Alpine's reputation (and the fine example I've had previously from them) it was certainly a disappointment. I'd say the bottle was old, or poorly stored, but purchased as it was from a fine, reputable beer merchant, and given the date on the bottle, I think we can discount both of these. It's a shame. I guess it's to its credit that it still tastes as good as this even despite the drawbacks.
appearance: 3.75 | aroma: 4.0 | taste: 3.5 | feel: 3.5 | drinkability: 3.5
Captain Stout
6.0% American Stout from Alpine Beer Company
Overall:
68 / 100
(Solid) 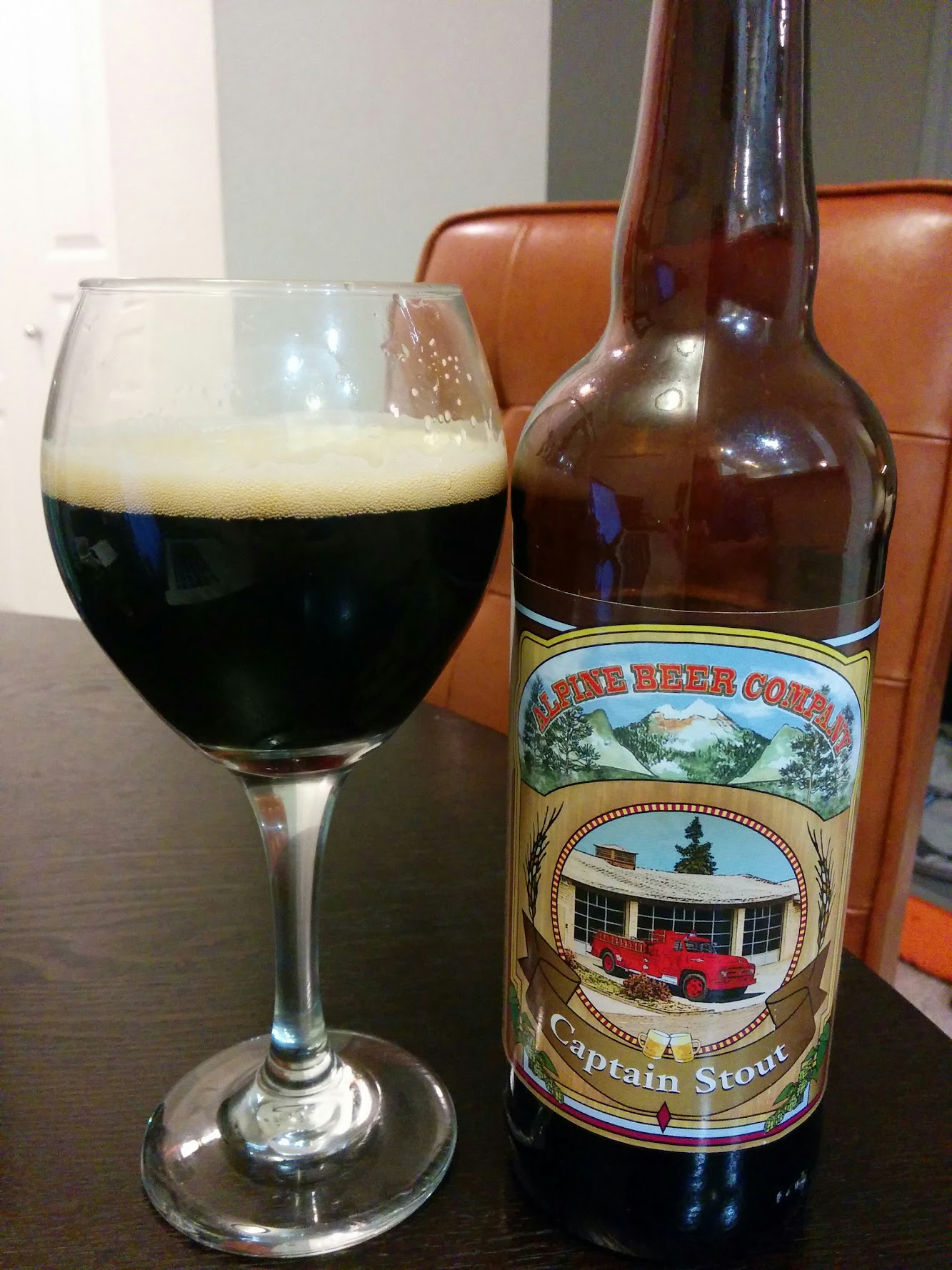 Pours a deep brown colour, only showing its true tone at the edges, and forming a slick oily weight in the glass. Head is a fine sheen of beige that leaves some minimal but delicate streaks of lace. Looks good.

Nose is very pleasant. Toasted malt with lashings of bittersweet cocoa and a touch of underextracted espresso. Also some tones of vanilla and marshmallow, which give it a kind of broad sweetness. It's nice stuff.

Taste is also solid, but it has a thinness towards the back that undermines it. It starts off well though, with more of those cacao notes and a touch of vanilla-infused coffee, but devolves a little towards the back as the palate drops away. This leaves a rather weak flavour of spent grounds and unsweetened vanilla pods. It's a bit of a shame.

Feel is rounded on the front, but melts away pretty quickly on the back.

Overall, it's relatively smooth and it has some nice characters to it. But it's not a great package all up, and feels like it's really missing something as things go on. I'll say it again: it's a shame—because this has the potential to be something pretty special, and it ends up being rather tame and dull.
appearance: 4.0 | aroma: 4.0 | taste: 3.5 | feel: 3.75 | drinkability: 3.75
Hoppy Birthday
5.25% American Pale Ale from Alpine Beer Company
Overall:
79 / 100
(Excellent) 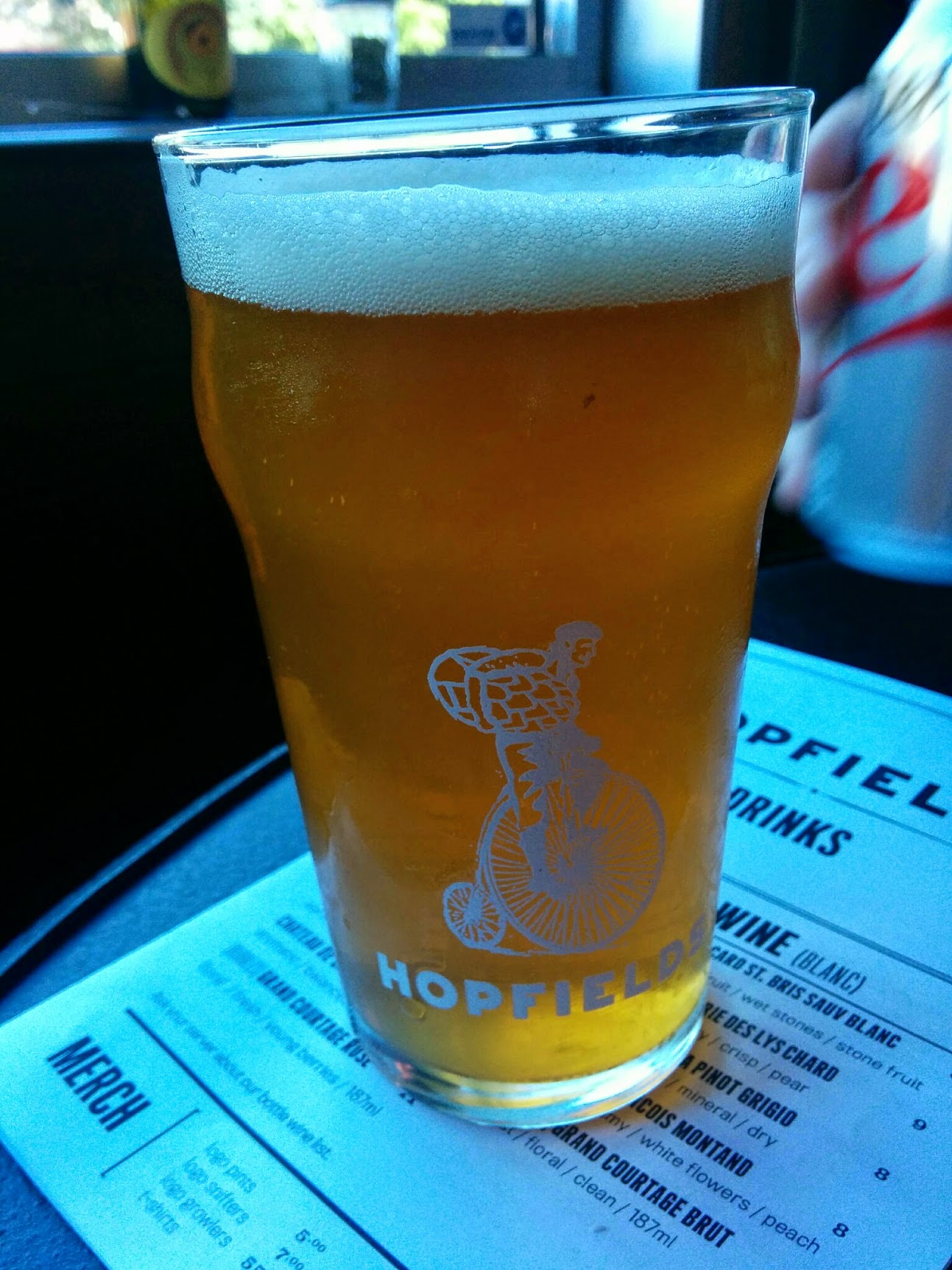 Pours a pleasant light golden colour with a little haze that helps it glow. Body is solid, and holds lots of fine, streaming carbonation. Head is a firm, frothy cap of white that stays persistently atop the glass. Lacing forms in vertical streaks. Looks good.

Nose is wonderful, with a big aroma of fresh hops bursting out from the first whiff. Pungent citric tones come through, clean and sharp with a little fruit sweetness to temper it. Indeed, it settles down a bit and gets a creamy neutral malt character to balance it. Very solidly created.

Light and easy to drink on the front palate, evoking out a little apricot and blunted orange, all with that smooth malt character to give it some plain, solid grounding. Bitterness builds towards the back, with a pleasant pithy orange note to it. This leaves a linger or resiny hop character on the finish, with a long and persistent bitterness in the afterpalate. Feel is rounded but fluid, with a linger of bite to it. Very drinkable stuff.

Overall—this is a beer that tells a tale of masterful hops craftsmanship. It feels very much as though the hop characters have been designed to do exactly what they do, as though every element of the hops is in tight control. That's a really excellent thing.
appearance: 4.0 | aroma: 4.5 | taste: 4.0 | feel: 4.25 | drinkability: 4.25