Pours a cola-black colour, with a coarse-bubbled head across the top that leaves a fine ring, but minimal lacing. Body is quite light, although it has a pleasant sheen to it. Carbonation is minimal. It looks okay, but not amazing.

Nose is very pleasant. A full, toasty richness that does bank itself on the ability of dark grain to stand on its own. But there's a sweetness that lends a slight aromatic chocolate character to the mix.

Palate is similar, but it's overall a little thinner and lighter than I was expecting. Still, there's a good toasted malt structure in the front, which doesn't shy away from being properly dark. But at only 5%, it necessarily drops away a bit on the back, probably improving the drinkability a bit, and certainly making it more sessionable. But still—I'd prefer a bit more punch.

Yeah, it's okay in the end. It's not a big standout, but it's a solid beer that sits well enough in a lineup of beers in general. Good as part of a mixed six—I don']t think it holds up that well on its own terms.
appearance: 3.5 | aroma: 3.5 | taste: 3.5 | feel: 3.5 | drinkability: 3.5
Pink Drink
5.2% New Zealand IPA from Funk Estate
Overall:
63 / 100
(Solid)
IPA infused with various pink things, to make it turn pink. Hence it's called Pink Drink. Brewed for GABS 2017, and tried at the festival on tap. Yes I'm aware the dates are wrong; I finally found the lost GABS tasting sheets hidden in my locker at work.

Pours an amber colour, fairly cloudy and sedimenty. Creamy-coloured head, webs out to leave a thin crown of bubbles. Cloudy, and amber rather than pink. But pretty good.

Smells citric, with a sweet orange overtone to it. Some cake battery malt and a touch of mango tropical aroma. Pretty decent.

Fruity for the most part with just a thin layer of grain on the front and underlining it all. Not really any distinct fruity characters, mostly just a generic apple/pear kind of character and it develops a weird chalky character on the back, like the fruit esters turn minerally slightly. Decent characters but not really distinctive or overly exciting.

Decent body; slightly thin body so a little pull as it goes back.

Pours a champagne colour, very pale with a touch of sediment. White head, foamy and retaining well. Was promised more of a pink tinge which I don't really see, but it looks good.

Smells funky, but not in the way I was expecting. Slight green apple tartness but otherwise mostly vinous that veers into rubbery, kerosene territory like an old Riesling. Intriguing but again I expected more fruit and this is not what I'm getting.

Taste is citric, and sour, and more in line with my expectations. Lemon and orange notes, with a touch of green apple. Big fruity notes from start to finish and doesn't really finish very tart, or interesting. Just peters out into a juicy flavour that is driven by fruit rather than any interesting souring of the beer. Not bad though.

Slight tingle of carbonation, gives it a bit more of a soft drink feel than the palate alone. 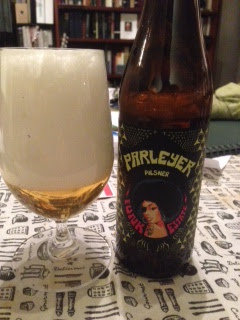 Bottle given by Jez, tried by me.

Pours a pale golden colour with really excessive head, might have to do with having chilled it in the freezer to get it cold more quickly. Sparsely webbed with a sweet marshmallowy texture on top. Lace is clumped around and there's a steady bead too. Pretty great pils but the head is annoying.

Smells very hoppy. Citric, fruity with kiwifruit, touch of mango, some mild herbal notes as well. Slight caramel grain but yeah all hops not much else. Pleasant.

Taste is quite sweet upfront, touch of vanilla, caramel buttermilk. Hops come through upfront, slightly peppery with big citrus notes, some kiwifruit and passionfruit. Fairly sweet still, with a nice malty undertone and just softly bitter hops towards the back. Quite herbal overall but a nice piquancy that's quite pleasant. Nicely balanced drop.

Decent body, touch of texture from the hops as it goes back. Not too thin at all; great texture for the size. 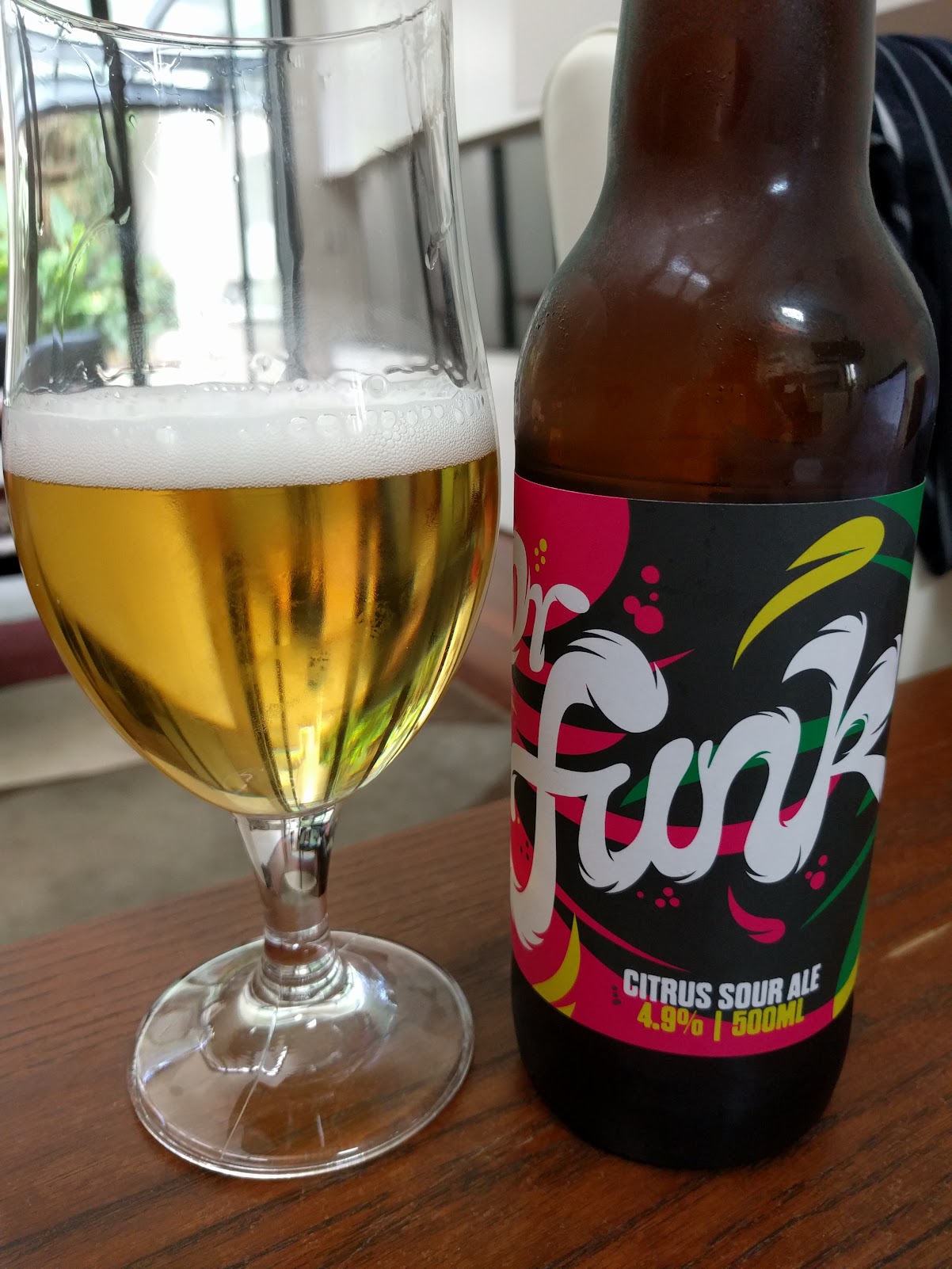 Collaboration between Funk Estate and Doctors Orders Brewing. This is a sour ale brewed with yuzu and black (dried) limes.

Pours an extremely clear and extremely pale yellow colour, almost looking like champagne. Carbonation is lower though, although it forms a very pleasant fine white ring. Body is quite fluid, but surprisingly looks deeper when tilted due to some languid static carbonation. Looks good though.

Nose is a little disappointing. There's a pronounced sour grain character which seems a little like garbage water or sour milk, initially. As it warms up, and if you swirl it enough, more of the citrus notes come through which mask the aroma. Once it's gone, fortunately, it mostly stays gone.

Taste mirrors this. There's a pleasant clean crisp citrus note from the yuzus in particular on the front, that give a slight tangy refreshing quality. On the back though is that slightly milky lacto sourness, that blends with the grainy notes to leave it feeling down and slightly swampy. It's a shame—without that character, it would be lovely and crisp and bright.

Feel is light, but effervescent, with a fine texture to the carbonation that works well with the citrus.

Overall, though, I do find it quite difficult to really enjoy it, despite the nice characters. Every sip, I just know that aftertaste is waiting for me. It's a true shame that something so minor affects so strongly what is otherwise a well-devised and well-constructed beer.
appearance: 4.0 | aroma: 3.0 | taste: 3.0 | feel: 3.0 | drinkability: 3.0
Afrogato
8.5% Russian Imperial Stout from Funk Estate
Overall:
56 / 100
(OK) 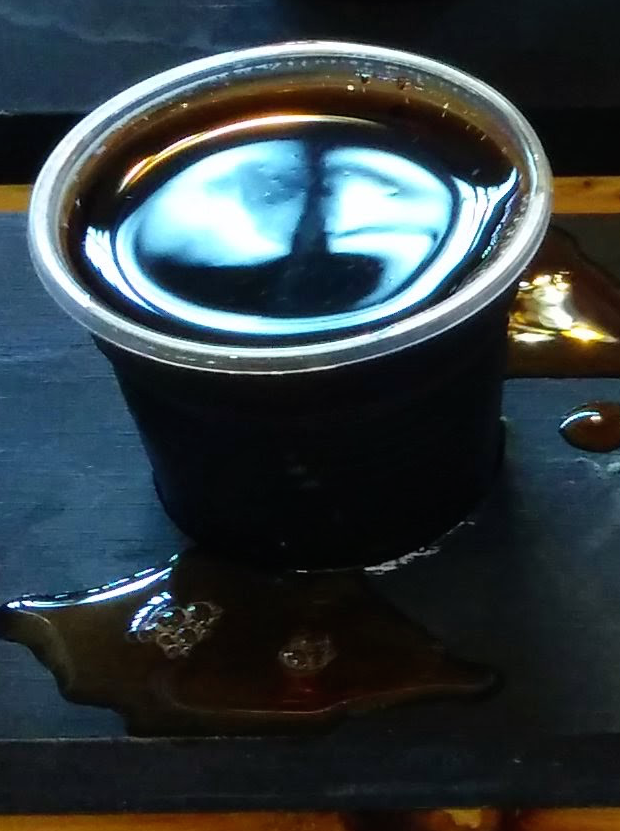 Pours a muddy brown colour, but with clarity through the surprisingly lightweight body. Head is a pale beige, but persists as almost nothing, only leaving a few specks of lace behind. Carbonation is flat—it almost looks dead in the glass, or like cold drip coffee.

Nose is mild and dull. Old coffee with a few heaped teaspoons of sugar in it, also with a slight oxidised cardboard character. Marshmallow comes through a little too, oddly. I don't love it.

Flavour is marginally better, with some smoothness and sweetness, again with a slight character of marshmallow and faint weaker coffee. On the back though, even this disappears, leaving the whole thing feeling pretty dull with just a mild linger of empty chocolate.

Feel has a bit of weight, but it's quite flat overall.

Smells quite sweet with European-style malts. Slightly buttery and vanilla character to grain, touch of spice and maybe some coconut. Tangy NZ hops are there but the fruitiness adds to the sweetness rather than balancing.

Taste is very sweet as well, and grainy. Buttery caramel malt upfront that develops a rich toffee character midway, touch of rye spice and then sort of plateaus out without hops making any kind of a statement. It's clean enough but I was really hoping for more robust hop character.

Not a bad drop, but a bit too much sweetness, and could use more NZ hops for either flavour or cleansing.
appearance: 3.5 | aroma: 3.5 | taste: 3.5 | feel: 3.25 | drinkability: 3.25
Afrogato
8.5% Russian Imperial Stout from Funk Estate
Overall:
71 / 100
(Very Good)
Pours a very dark espresso colour, really dark all the way to the edge. The edge is very visible because there's NO HEAD. Can't even describe the head because it was never head. Nice colour, though.

Smells fairly sweet. Malty upfront that develops into chocolate midway, some sweet coffee notes towards the back, caramel and licorice as well. Not bad, but not amazing.

Coffee comes through fairly strong on the palate, spicy and rich with notes of vanilla, chocolate and cinnamon. Touch of oak towards the back and an odd earthy note that reminds me of chilli - there's a fair bit of spice here too which adds to that impression. Really quite grainy overall, but nice and big nonetheless.

Nice full body which I'd expect, some booze heat towards the back.