330ml can purchased for me by Sam as part of his 2018 advent calendar. Reviewed blind.

Pours a very slightly hazed pale golden, with a coarse-bubbled and very fizzy head that runs out of steam quickly, leaving no foam at all after a matter of seconds. Body is light, and lacking persistence. It looks very underwhelming, to be honest.

Nose is quite pleasant. It has a strong fruit presence, almost like a perry. But it's quite sweet as well, more like pineapple or guava. It has a metallic acidity to it as well though, which gives a slight chemical note—it almost has the smell of fresh housepaint. But it's almost entirely covered by that fruit note, and that's a saving grace.

Taste is not great, honestly. It has that fruit character struggling about in a great unwashed mess of competing characters. There's a vague lactic sourness on the front, but with a turn towards the burn of malic acid. The grain note is husky through the centre, and it finishes with a really quite genuinely unpleasant dirty yeast note that tastes like the dregs of warm Carlton Draught.

Feel is overly fizzy, but with a lactic bite in the finish.

Overall, I'm not a fan. It's very overcarbonated, the base beer is not good, and the fruit character is confusing more than anything. I do think that it has some nice aromatics to it, but it doesn't at all manage to integrate this into the finished beer.
appearance: 2.0 | aroma: 3.5 | taste: 2.5 | feel: 3.0 | drinkability: 2.75
It Takes Two to Mango
8.0% Double IPA from Stomping Ground Brewery
Overall:
56 / 100
(OK)
Mango Double IPA brewed for GABS 2017, tried there on tap.

Smells decent; quite sweet with caramel and toffee notes to the malt. Tropical fruit as well, with hints of passionfruit and mango. Maybe a touch too subtle so it ends up sweet with a hint of tang and I feel it should be ballsier. What's there is good.

Taste is fruity, and light. Mango and passionfruit again, with the passionfruit providing the tang on the back. Very little bitterness given the style, maybe it's meant to be a NEIPA but it just feels insubstantial and it peters out with sweet fruit instead of balancing itself. Just lacking in character and complexity especially for 8%.

Full body, with a tingly carbonation as it goes down. Hint of alcohol warmth. Not bad.

On tap at the Local Taphouse, the day before Sydney Mardi Gras. I kind of ignored the fact that the staff were putting up rainbows all over the bar and only later realised what day it was. I like to think it means I'm relatively free of bias, that I don't see anything unusual in rainbow flags going up everywhere.

Pours a pale fruity yellow colour. Cloudy, very cloudy even. Head is thin, tightly packed bubbles that retains very thinly on top. Not bad, I like the witbier haze.

Smells very fruity and spicy. Good ripe peach character, with notes of Belgian spicy phenol at the back, as well as some coriander that overall contributes to a slightly sour character. Not unpleasant though; the fruit is the saving grace.

Taste is more on the fruity side, and good on it. Big peach character takes over early, with ripe tropical notes building towards the mid. Spice takes over late-mid with coriander mixing with cinnamon, and some dry and slightly sour peppery notes late as well. Quite a good witbier, with a nice peachy twist. Good Belgian characters, although the back is really quite spicy.

A bit prickly and thin, has a big spicy edge towards the back.

Quite a nice witbier, pleasantly put together with enough peach to give a twist without it strangling the classic wit spice characters.

On tap at the Local Taphouse.

Pours a bronzey amber colour, light but steady trickle of bead up the side. Head is off-white/beige, not a lot of it but some nice lacing left behind. Looks pretty decent.

Smells a bit off. Malty, predominantly, with a big caramel note that gets into slightly buttery territory. Hint of some hops that are somewhat dank and a touch tropical but just smells heavy and a little off-kilter.

Taste doesn't do a whole lot better, unfortunately. It's very very sweet and malty with a chewy caramel toffee base, that gets a little bit of bittering hop mid-to-late, but it's sort of earthy and dank like PoR (although I don't think it is), with a hint of candied orange, so it really doesn't lighten up the palate and it sorely needs some. It's not unpleasant, but it finishes very sweet and quite thick on the body so it quite plainly needs something to cut through.

Yeah body is a bit thick, with a bit of tingle from the carbonation, but it needs more of a slice than a tickle.

I feel like there's just a couple of tweaks needed and this could be a pretty tasty pale ale. At the same time and not to be overly condescending, but I feel like it's not a difficult style to get right, so those tweaks should already have been made.
appearance: 4.0 | aroma: 2.75 | taste: 3.0 | feel: 3.25 | drinkability: 3.25
Piquant Beere Weisse
3.2% Berliner Weissbier from Stomping Ground Brewery
Overall:
59 / 100
(Decent)
Blackcurrent Berliner Weiss brewed for GABS 2016. Tried at the festival in Melbourne.

Decent body but the pull from the wildness is a little sharp. 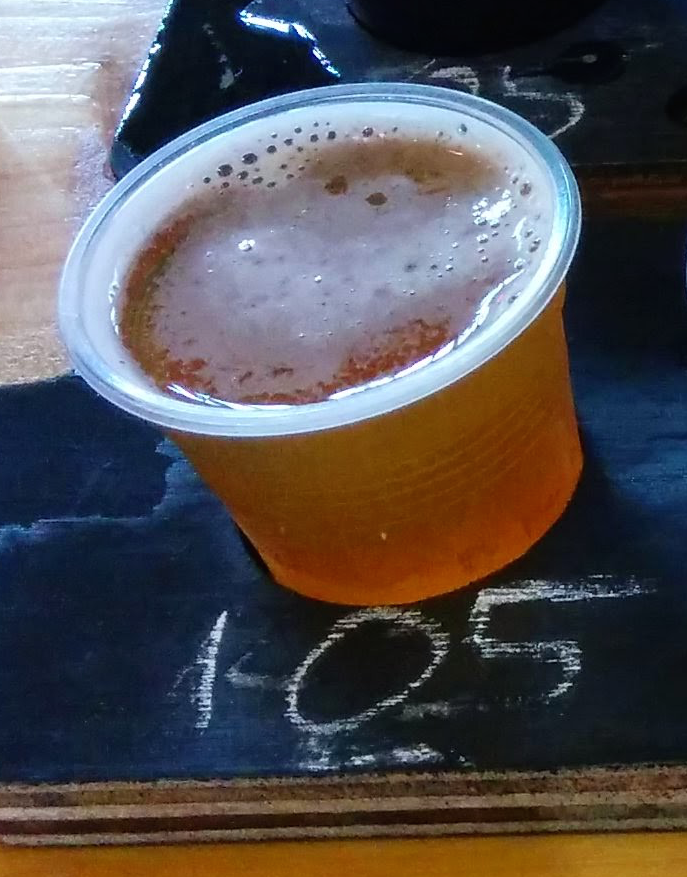 Pours a hazy yellow colour, light in body with some fine carbonation. Head is white that forms a firm ring and leaves some good lacing. Looks pretty decent.

Nose is disappointingly grainy and rather dull. There's some faint vegetative hops to it, but also an unpleasant bready, floury note. I'm not a fan.

Light buttery characters on the front bode ill for what's to follow, but at least we end up with a little graininess and a little bit of grassy cleanness towards the back. There is a slight mouldy or dank character around the back, but it's light enough. There's even a hint of fragrance when the bitterness comes through in the finish, meaning it ends up better than it might have been.

Feel is light, but that works okay in this beer.

Yeah, it's drinkable enough, but it's not the right sort of beer for GABS. Give me a pint of it at the pub sometime and it might be a different story.
appearance: 3.75 | aroma: 2.25 | taste: 3.0 | feel: 3.25 | drinkability: 3.5
Inception
5.5% American Pale Lager from Stomping Ground Brewery
Overall:
71 / 100
(Very Good)
Pours a champagne colour, huge cloud through it. Head is white, large bubbles just around the rim. Nice cloud, but not sure it belongs in a lager.

Smells grainy, yeasty. Cereal notes with a touch of fruit - apple/pear and lemon mostly. Not bad, but fairly non-descript.

Taste is grainy upfront with a touch of pearl barley, then the hops take over midway with lots of lemon pith, citrus, that actually gets quite bitter towards the back. Cleansing and fairly pleasant.

Quite a full body for the style and the ABV, good texture.