On tap at the Flodge Hotel as part of their SA State of Brews takeover during Sydney Beer Week 2017.

Smells fragrant; largely fruity with some floral notes as well. Some toffee and light spice notes and a mildly harsh grapefruit bitterness to it. Pretty standard; not bad but nothing spesh.

Taste is a bit more dour. Quite sweet upfront with a big caramel malt sweetness that's a bit heavy, then develops this big resinous bitterness that has lots of hop oil all around it, with grapefruit and pine needle character as well. Slightly medicinal late-mid due to the combined heaviness of the malts and the resiny notes of the hop oils. Can't say I love it; it's ballsy but it needs some freshness as it's overall a bit weighty and kinda weird - fruity sweet even in its bitterness.

Decent body; bit of carbonation texture towards the back which is welcome. Otherwise somewhat thick.

Yeah might be a bit flawed; drinks like there's a weird ester on there that cant be put down to hops, and otherwise is quite full on with flavour and not quite balanced enough between the elements.
appearance: 4.0 | aroma: 3.5 | taste: 3.0 | feel: 3.5 | drinkability: 3.0
#63 Thai Green Curry Pale Ale
5.5% American Pale Ale from Big Shed Brewing
Overall:
78 / 100
(Excellent)
So unlike Bright Brewery's Thai Curry beer, this one offered a decent description of itself as a pale ale, so I'm going with that. But obviously there's a shitload of adjuncts in this.

Pours a pale straw colour, not as cloudy as I somehow expected. Head is white, large bubbles with good retention. Looks pretty good, and curious.

Smells massively of coriander, and black pepper. Some lemongrass and a slight nutty, pecan edge to the malt. Good tang to it; smells very pleasant indeed.

Taste has the similar burgeoning tone to the way it all swells up but they're slightly different characters. Big kaffir lime notes and again with the coriander. Some lemongrass and a touch of coconut. Tangy and gorgeous with a hint of chilli on the back. Really impressive.

That's a winner. Spice, tang, sweetness and heat. These guys have really cornered the market on beers that taste like other things. If I have any shortcomings it's that this doesn't quite bring it back to beer, and just tastes like a tangy liquid curry sauce. 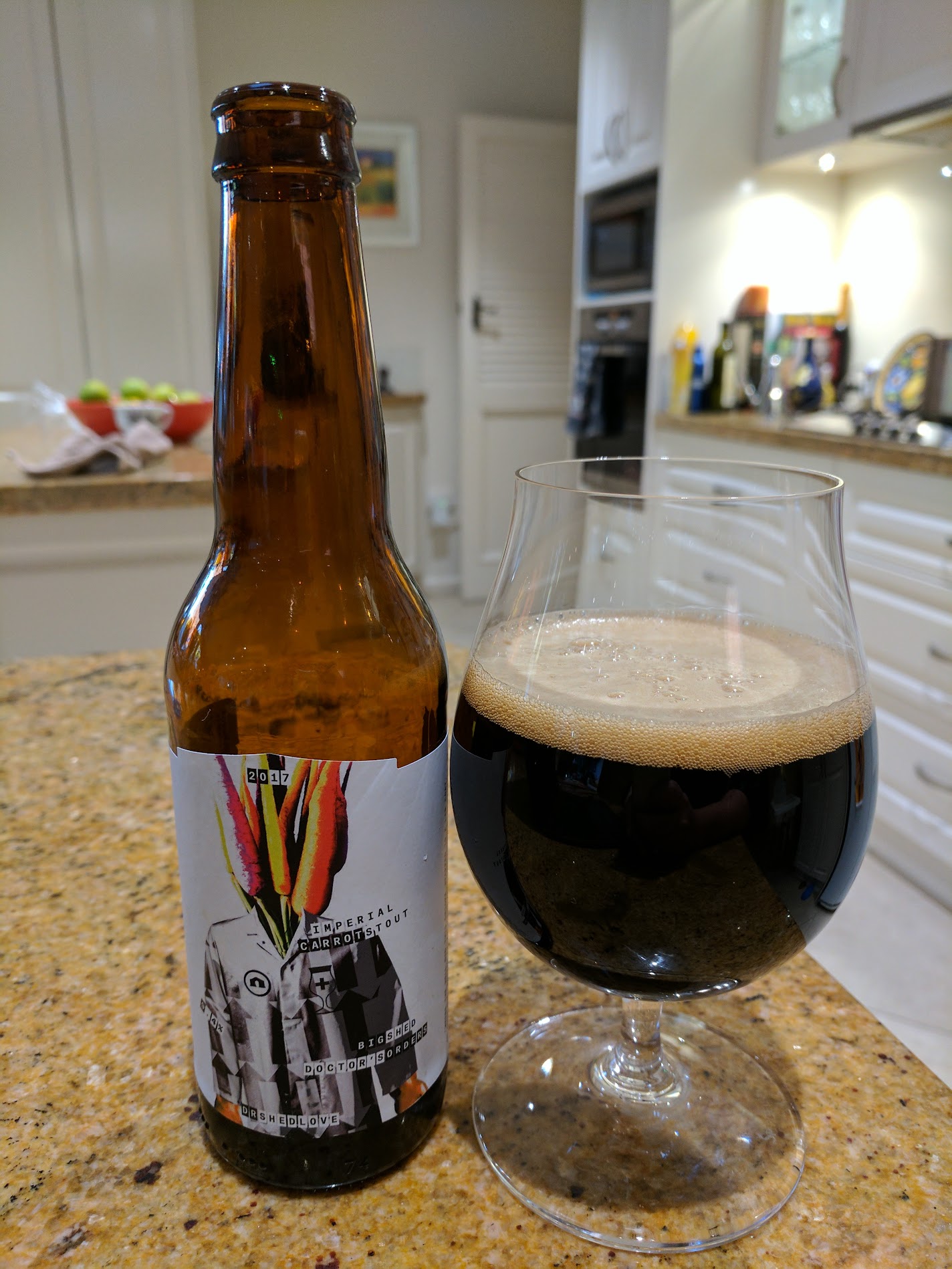 330ml brown bottle purchased from Leura Cellars. This is an Imperial Carrot Stout, because of course it is.

Pours a deep brown, certainly brown at the edges, with some clarity to it. Head is very fine, forming a thin film that leaves tight, intricate lace. Body is quite firm, with nice powdery carbonation. Looks good.

Nose is, in theory, carroty. It's more that it just has a semi-sweet semi-savoury character from the malt, but the suggestion of carrot on the bottle is enough to ascribe the sweetness to it. Otherwise, there are some reasonable rounded fruit notes, and perhaps a touch of Belgian yeast esters. It's pretty nice.

Taste is a bit more of a hodge-podge. Here, we finally get the robust roasted character you expect from an impy stout, but the Belgian yeast saps a lot of the fullness from the body, leaving it feeling ephemeral, aromatic and empty. Towards the back, there's a sweetness you could also believe is from carrot, but it's tied into the boozy note, so it's also possible it's just due to the overall character of the imperial stout.

Feel is slick and tight; it is lacking some richness at least.

Overall, it's pretty decent. The one thing that I think is a real mismatch for the coherence of the beer though is the Belgian yeast. It makes the bottom drop out of the beer, which isn't great for a beer that needs richness and body behind it. The carrot is just a gimmick. I like the idea, but much like the sweet potato and pumpkin in previous releases, it's not a key element.
appearance: 4.0 | aroma: 4.0 | taste: 3.5 | feel: 3.5 | drinkability: 3.5
Dr Shedlove 2016
9.0% American Imperial Stout from Big Shed Brewing
Overall:
60 / 100
(Decent)
330ml brown bottle purchased from Leura Cellars. This is the 2016 batch: made with yam + taro.

Pours a deep brown colour—certainly brown rather than black, with a fine head of deep beige. Carbonation is fine and furious, streaming swiftly to the top of the glass. Lacing forms in rather thick diagonal streaks. Body is decent, but very light for 9% ABV. Looks okay.

Nose is pleasant, without being outstanding. There's a robust toasty chocolate/cocoa note, which is nice enough, and maybe a little something vegetative and organic from the root vegetable additions—although it almost skews towards freshly shaved coconut. Smells actually a little weak.

Taste is similar, but I'll give it credit for managing to mask the booze. There's a lightness to the palate, probably as a result of the Belgian influence, with only a light dusting of cocoa and a very mild sweetness driving through the centre. Yam & taro are probably there: but only if you're really looking for them, and they honestly don't add a great deal to the beer. Finish is slightly organic, maybe with a touch of that coconut flavour again.

Feel is lighter than expected—again likely the Belgian influence, but it doesn't necessarily work in a beer that's meant to be big, rich and chewy.

Honestly, I'm underwhelmed. Doc and Big Shed both do some big, exciting beers, and when they get to do something crazy, I'm disappointed that the end result is something that's high-concept but low execution. This should have been a much more interesting brew.
appearance: 3.25 | aroma: 3.5 | taste: 3.5 | feel: 3.0 | drinkability: 3.25
Beery Ripe Porter
5.7% American Porter from Big Shed Brewing
Overall:
79 / 100
(Excellent)
On tap at GABS 2016, with a high sense of anticipation after Big Shed scored my highly coveted beer of the festival award in 2015.

Pours a mahogany colour, dark to the edges though. Head is lovely, nice retention of a beige foamy crown. Bit pale maybe, but looks like a nice porter anyway.

Tastes like a cherry ripe, too. Sweet upfront, with vanilla and chocolate characters, gets more roasty and bitter towards the mid where it is balanced by a big coconut character, and then the cherry and dark fruit sweetness come through late. Nicely cleansed on the back so it doesn't get bogged down in sweetness but that's still the lingering memory of the palate, along with just general nostalgia that it so successfully evokes. Great stuff.

Body is a little disappointing, it's quite thin for the big flavours it packs in. I feel most of the flavour is from adjuncts so the malt base is a little lacking.

Tastes like a cherry ripe. In beer. What more could you ask for given the promise this had? Wonderful nostalgia constructed beautifully. Shit, these guys have done it again. 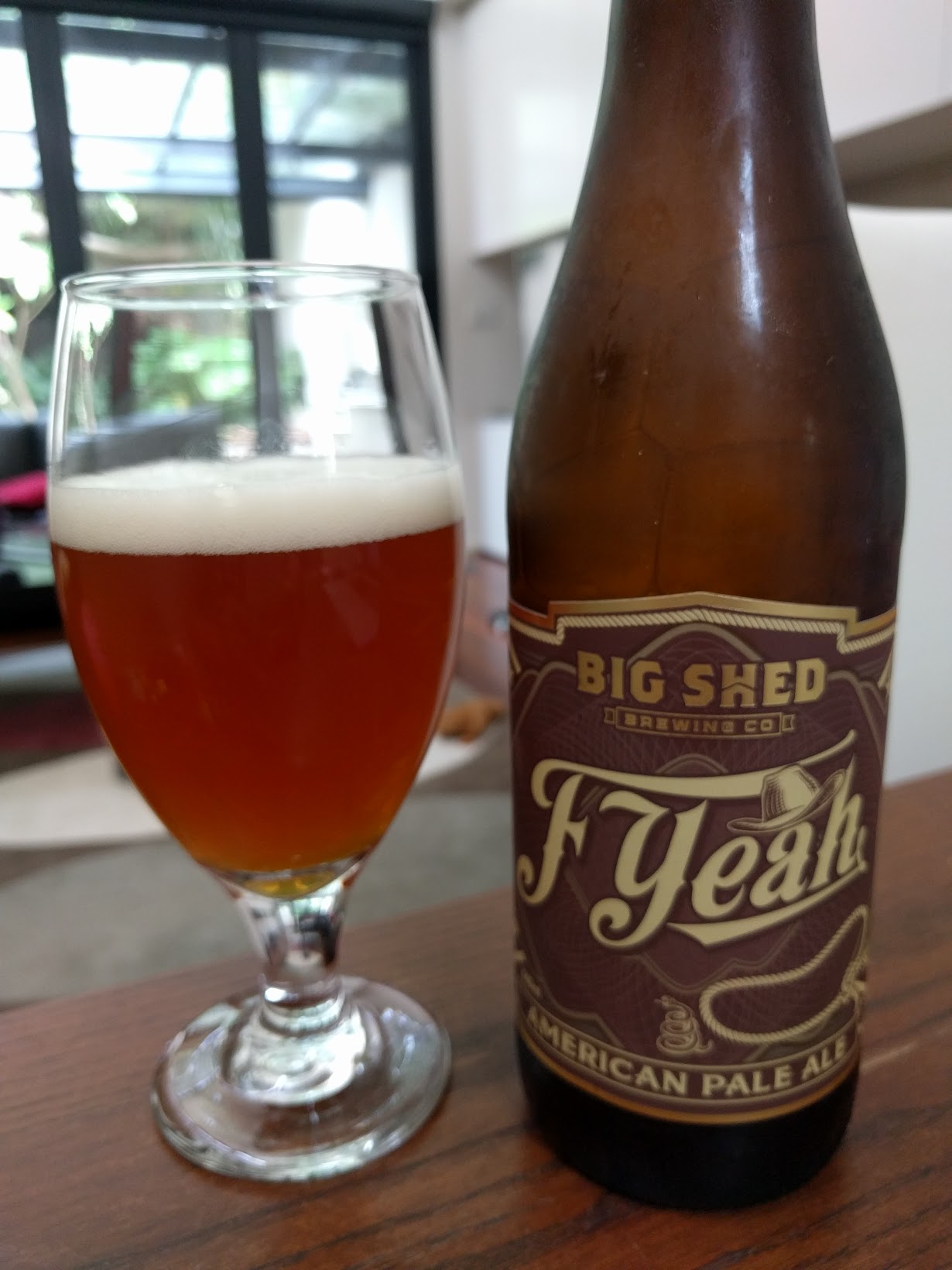 Pours a slightly hazy orange colour, with a firm, relatively fine head of white. Carbonation is fine, but surprisingly minimal. No lacing really forms. Looks decent, if a little underwhelming.

Nose is also decent, hem hem, if a little underwhelming. There's some slightly herbal notes to the hops, which are certainly present, which give a dusty aroma to the beer. There is some semblance of the more fruity end, a little dried citrus peel perhaps, almost giving a slight carbonic note. It's okay but not amazing.

Taste is a bit better, mostly because it's extremely clean and very drinkable. There's a touch of bitterness, melded with a smooth neutral malt character, that doesn't provide much true sweetness, or much personality on its own—but that's not the point here. It provides the canvas, and the hops provide the lilt of interest.

Feel is pretty smooth, but with a lightness and a crispness towards the back.

It's a super-drinkable beer, despite the fact that it's actually just not that interesting. But maybe you don't want interesting. Maybe you want to just have a beer which won't distract you from the conversation you're having, the film you're watching or the fun you're having. This is the beer for then.
appearance: 3.25 | aroma: 3.25 | taste: 3.5 | feel: 4.0 | drinkability: 4.25
Golden Stout Time
6.0% Milk / Sweet Stout from Big Shed Brewing
Overall:
80 / 100
(Excellent) 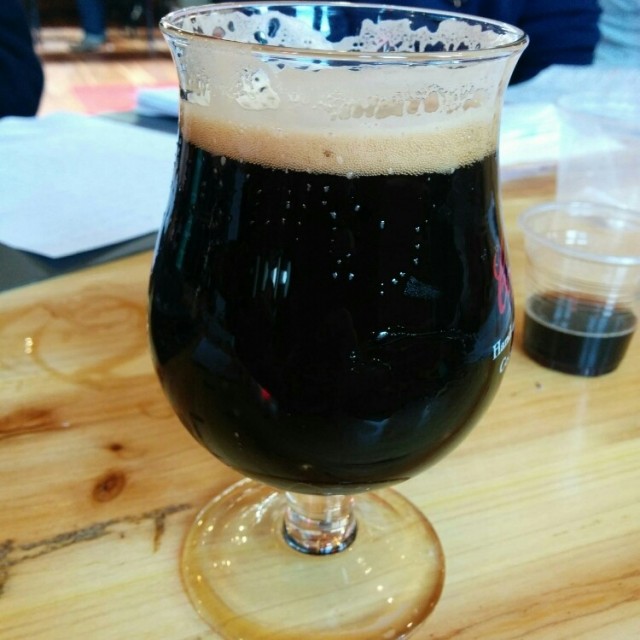 Tried on-tap at GABS 2015. After numerous retries, this ended up at the top of my list of the festival, even though fared worse than others on my initial tasting—but there's some x-factor to it that really makes it stand out, quite aside from being a fine beer on its own terms.

Pours a deep brown colour, quite clear and free of hazy. Body is quite liquid and fluid. Head is beige, and although ends up quite thin it leaves very intricate lace. Looks pretty good.

Nose is lovely. Sweet biscuity characters with lashings of caramel and coconut up the wazoo. It's so smooth and sweet, and the characters complement each other really nicely. I like it.

Light toasty opening on the palate, with a bit of compound chocolate that develops into a choco-coconut amalgam by the mid-palate. Back has a linger with some more biscuity sweetness and a touch of vanilla. It cleans up nicely in the finish—there's a touch of bitey bitterness in the back to stop it from getting too cloying.

Feel is very light—I think it could do with a melty sweetness to it. Overall, this was good stuff—I wrote that it would be a solid contender for People's Choice as well (where it did do well), but I was certainly happy myself to have this as one of my picks of the festival.
appearance: 4.0 | aroma: 4.25 | taste: 4.25 | feel: 3.75 | drinkability: 4.25
Golden Stout Time
6.0% Milk / Sweet Stout from Big Shed Brewing
Overall:
81 / 100
(Exceptional)
Pours a brown colour with beige head of medium foam that sticks around nicely. Looks like a decent stout, could maybe be a touch darker.

Smells biscuity. Sweet and pleasant with loads of vanilla, caramel and a touch of peanut. Just astoundingly good.

Taste is similarly biscuity upfront, with again a slight nutty edge to the opening malt base that develops rich chocolate, sweet vanilla and caramel complementing beautifully. Evolves into a somewhat bitter finish that might exclude this from being a people's choice winner (note: I actually wrote that on the night, how prescient of me), but a coherent way to finish to bring it back into the beer realm. Lovely drop.

Body is a little thin, but the texture is fine for what it's presenting.

Very, very nice sweet stout. I didn't realise going in that this was a Golden Gaytime beer but it really hits the nail on the head, while retaining an interesting and well-rounded stout palate. Right in most people's wheelhouse.