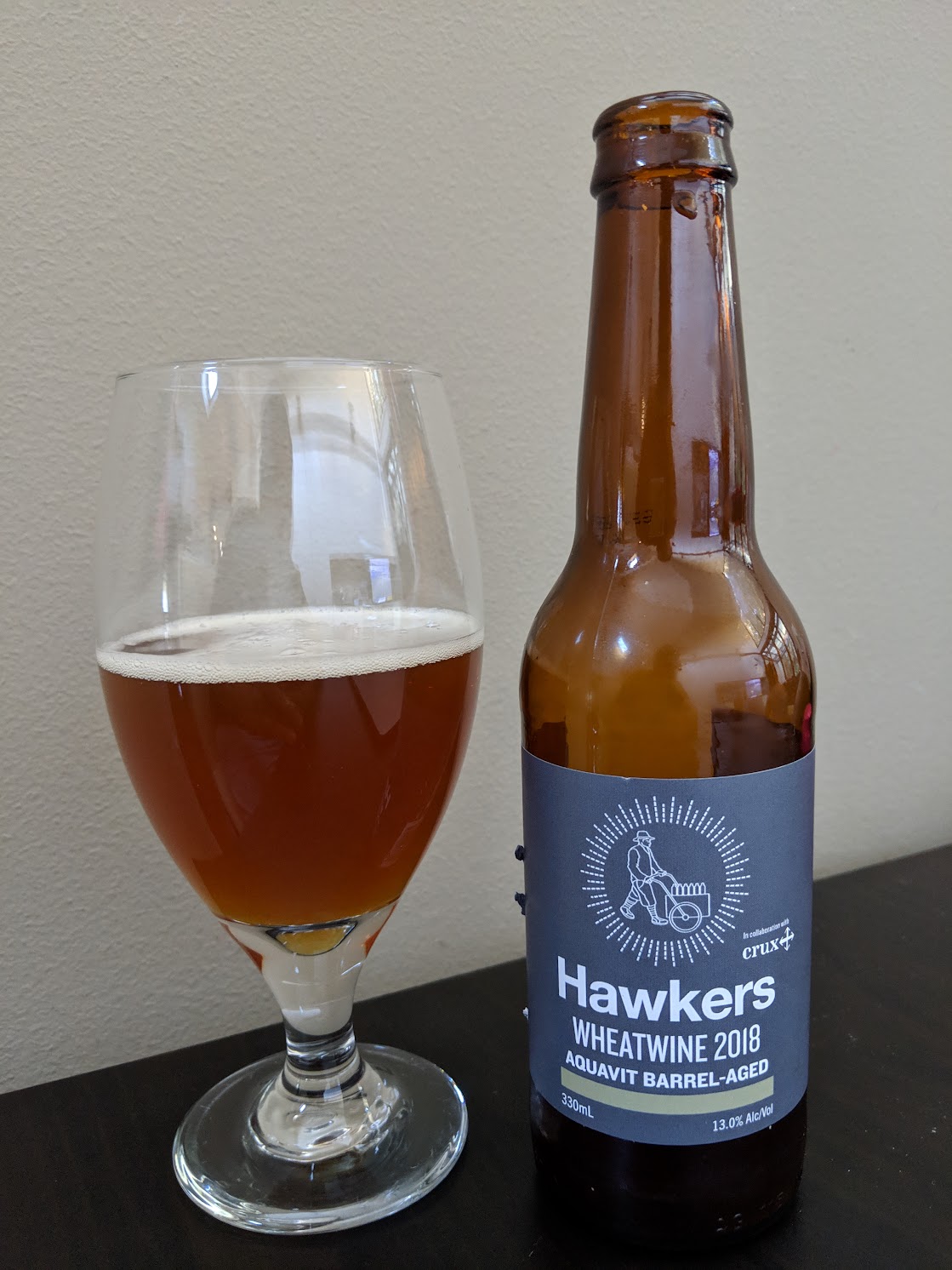 330ml brown bottle purchased for me by Sam.

Pours a deep golden, almost-amber colour, with a fine, but flimsy head of off-white that peters out to very fine ring and little else. Carbonation is powdery, static and fine. Body is slick, but fine as well. Looks decent.

Nose is soft and sweet. It's not as immediately boozy as you think it might be. There's some seedy spice aroma from the aquavit, giving a semi-savoury character of caraway which connects to the caramel sweetness from the malt. It's pleasant.

Taste isn't perhaps as complex as it might be, but it's pleasantly balanced. The front starts with some sweet, caramel characters, again connected to the spice, which gives notes of toasted sesame and cinnamon. The back is a bit flat, to be honest, and it lets the palate just whimper away. It also allows the first touch of booze to raise its head, and it adds a touch of harshness in the finish.

Overall, it's pretty decent. It has a nice balance to it, and up until the end, the booze is well hidden. It probably needs more genuine complexity to warrant the ABV, but the fact that it's not overly harsh or hot means that it earns something of a reprieve. Decent enough all up.
appearance: 4.0 | aroma: 4.0 | taste: 3.75 | feel: 3.5 | drinkability: 3.75
Hop Series IPA No. 2
6.0% American IPA from Hawkers Beer
Overall:
60 / 100
(Decent)
IPA made with several South African hop varieties; can given to me by Jez for my birthday.

Pours a pale orange with thick haze. Head is white, foamy so doesn't really stick around, leaves some whispy bubbles around the edge. Some decent lacing; looks fine.

Smells nice. Citric and spicy. Bit of a szechuan pepper aroma with some grapefruit, grains of paradise, coriander and a touch of boot polish. Kind of a bergamot richness to it as well. Distinctly hoppy but a big earthy spice on there which is quite nice.

Taste is similar, but it doesn't quite have the same complexity. Ends up mostly earthy, with some spice, notes of coriander and black pepper. Doesn't quite have much freshness on there which is a bit of a deficiency because it just ends up quite a flat palate. Just starts a little grainy, turns earthy, there's a mild and long bitterness but not really much of a lift or any layers to it, just blares it out from midway. Not bad, but pretty flat and a little turgid.

Mouthfeel is a little harsh, with a fair bit of carbonation that feels too raw, without enough malt presence. 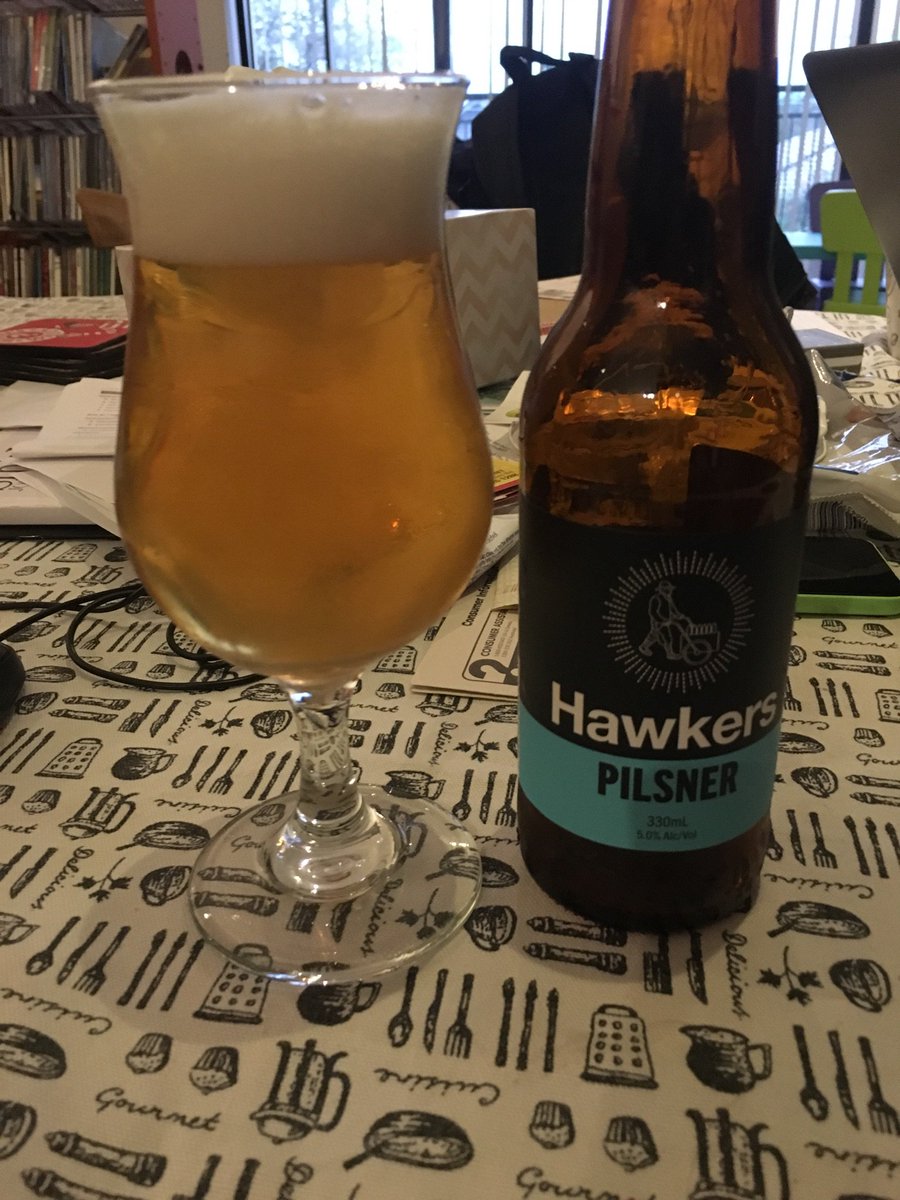 Day 4 of my #fletchmas Advent Calendar. Reviewed blind, as I have with all of these, if that isn't clear from the review.

Pours a pale golden colour, very light haze. Head is white, bubbly but nicely dense, retaining a thick rim of lacing around the edge. Looks like the sort of beer you'd expect to have bead, but there's none in sight. Looks clean; nice.

Smells grainy. A little bit sweet, with puffed rice and a light chemical note. Slightly corny, some pearl barley. Yeah, not loving it. Adjuncty and sweet. Not a lot of grounding.

Tastes better. Not a huge lot better but there's a distinct tang from some hopping that is very welcome at this stage. Front is all that sweet cereal character, with corn and some barley, then a slight swell of citrus and melon fruit that gets nicely tangy towards the finish and then cleans off at the back. Slight earthy bitterness but otherwise fresh on the back. Actually gets better as I keep sipping. It's not groundbreaking but there's a nice hop swell and clean finish which is quite refreshing.

Body is not as light as I expected but not a lot of texture so it's slightly gluggy. I'd actually welcome some more carbonation fizz in this case.

Pours a deep brown colour, very cloudy presumably from the adjuncts, with a pale beige-coloured head, dense and creamy. Maybe a bit pale for something that's an imperial brown ale, but looks pretty good.

The nose is very complex, but maybe a bit incoherent. Hints of chestnut, peanuts, honey and a big clovey aniseedy note as well. Feels like they went in with the intention of doing a big sweet nose with a hint of spice and it's gone the other way instead.

Taste is predominantly sweet. Caramel malt note with a hint of honey towards the middle and a fair nutty edge to it as well. Nutty, sweet, honey, really. Bit of weird spice towards the back but doesn't really draw it together, just seems a mishmash of different sweet and spice characters.

Tastes a bit off, maybe a bit of ethyl alcohol from the fermented honey. Good nuttiness that tries valiantly to guide it into a coherent palate profile but it just feels a bit overcooked.
appearance: 3.75 | aroma: 3.5 | taste: 3.25 | feel: 3.0 | drinkability: 3.5
Imperial Stout
10.0% American Imperial Stout from Hawkers Beer
Overall:
70 / 100
(Very Good) 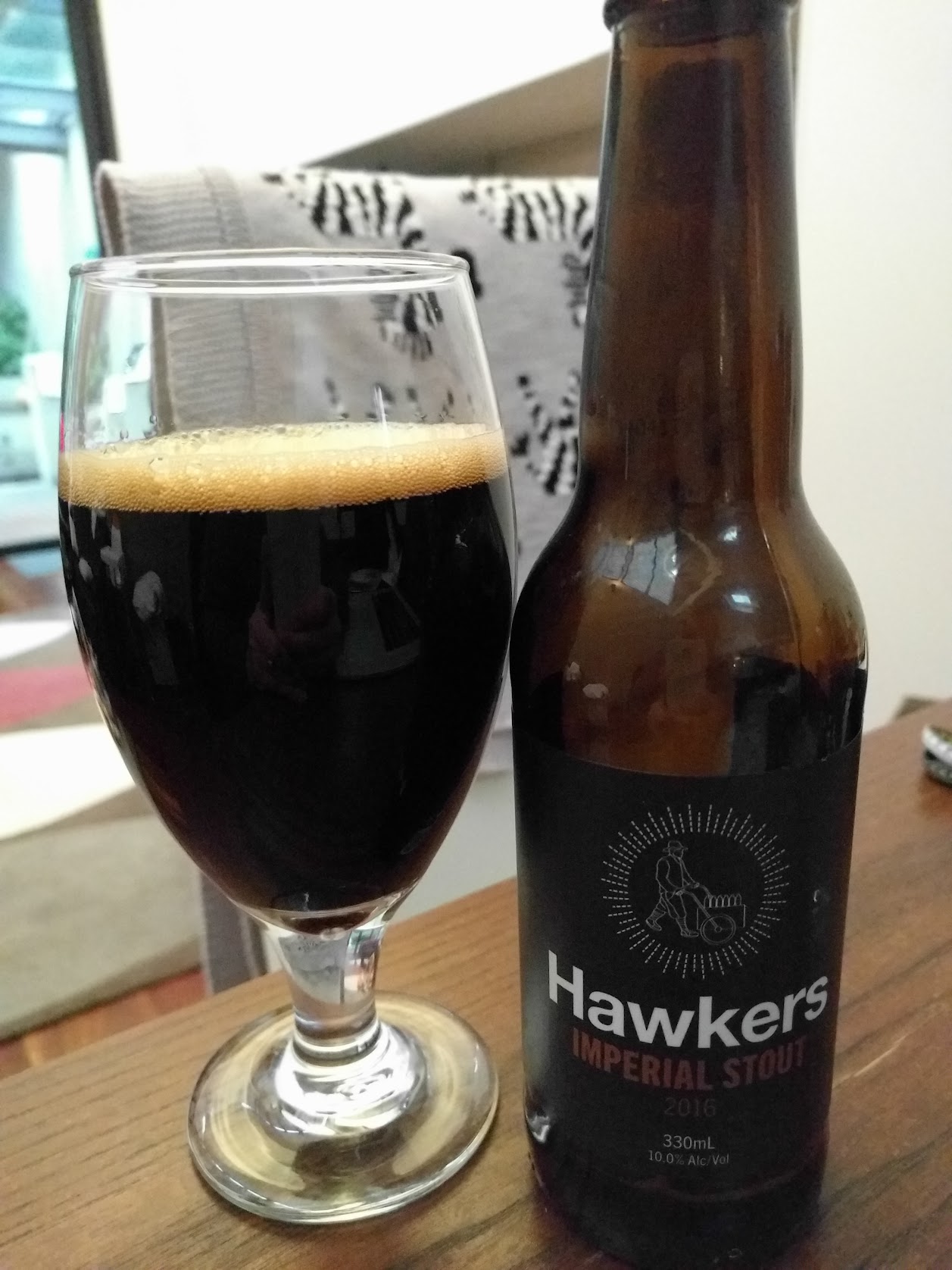 Pours a deep brown colour—certainly brown rather than black, with a coarse-bubbled head of of pale chocolate brown that settles out to a thin ring. Body is decent, but surprisingly light and fluid for its weight. Looks reasonably good, but not the bombastic beast you might expect.

Nose is pleasant. Mild toastiness with hints of light-roasted coffee and tobacco. Slight sweetness gives it wafting overtones of toasted coconut, marshmallow and raspberry candy. It's rather pleasant, without being all up in your business about everything.

Taste is also pretty good. Supple body has a bit more weight than I expected, and there's some residual sweetness that never gets cloying. Instead, we have some mild toasty characters, with a slight spicy astringency like anise. The back has some toastiness, but it never gets to full roast, coffee bitterness or acridity. I'd almost like just a touch of that for an imperial stout.

Feel is just a little bit over-carbonated. It has a fizziness on the front of the palate which seems quite out of place. 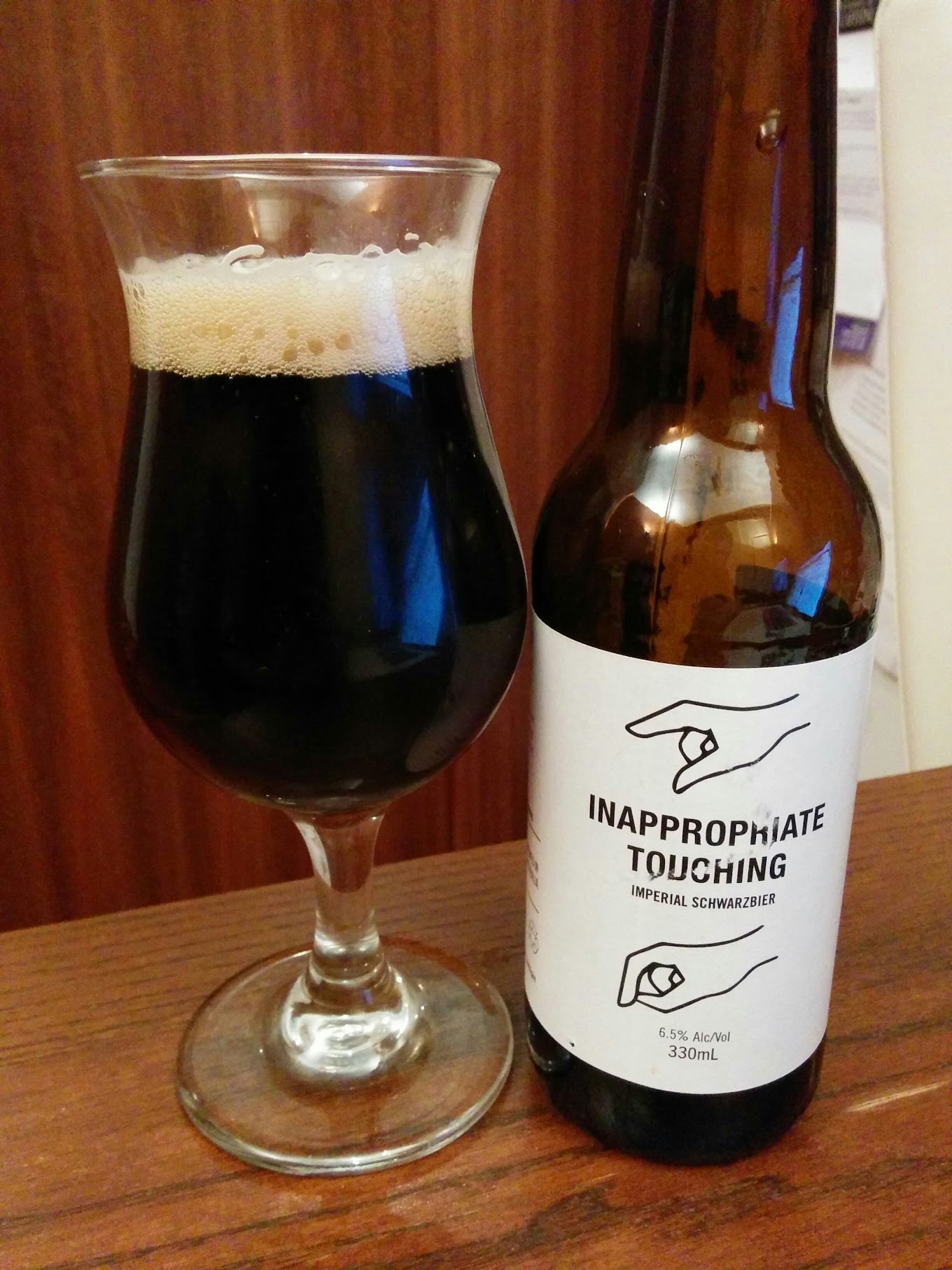 330ml bottle purchased from Slowbeer in Melbourne. This is a monster collaboration brewed at Hawkers for Good Beer Week 2015.

Pours a rather muted deep brown, quite light at the edges, and certainly rather ruddy when held to the light. Head is coarse, but persistent, sticking as a fine ring around the glass and leaving pretty solid sheeting lace. Carbonation is fine but swift through the body. Looks decent enough.

Nose is also fairly muted. There's a vague brownish malt character that gives it a bit of toasty graininess, and perhaps a little clean hop character that vaguely smacks of lemon. Together though, it's a little bit dull, and extraordinarily restrained for a beer that doesn't have much to lose.

Similar kind of thing on the palate: it's not unpleasant, but it is really surprisingly dull. Thin, mid-level malts give it a sense of body, but it also takes on a rather flat dry grassy tone that doesn't really do it any favours. Back is cleaned out by the dryness of the lager yeast, but there's nothing in the way of a counterpoint, meaning it just flops around impotently until it dies.

Feel is actually surprisingly flabby—a bit of crisp hoppiness singing in the top register would lift it, as would a touch more carbonation. Having both would be better.

Overall, this really genuinely wasn't that great, especially for a one-off beer brewed for a special occasion. Surely, more than any other time, this is the chance to go for something more exciting or unusual, and instead we've got something which meanders towards the equivalent of a beer-world median. Maybe it's just a matter of Too Many Cooks.
appearance: 3.5 | aroma: 3.5 | taste: 3.0 | feel: 3.0 | drinkability: 3.0
Imperial Red
7.6% American IPA from Hawkers Beer
Overall:
70 / 100
(Very Good)

Pours a golden-to-amber hue that in no way seems red to me. Body is quite clear with some solid weight behind it. Head is off-white, forming a fine ring that leaves good sheets and legs of lace. Carbonation is very fine when tilted. Looks good, aside from the colour.

Nose has a slight toastiness to it, with a bit of tropical fruit adding some hoppiness. This is also accentuated by a slight pepper character and supported by a smooth, dull sweetness. It's rather mild all up and lacking a real punch, but it's not bad.

Nice clean mellow entry, with some hoppiness above a decent body. Mid-palate is fruity and pleasant, with a dry, clean hoppy note towards the back. It is dry though, and this leaves it a little dead and slightly generic towards the back, almost a touch adjuncty.

Feel is smooth and thick at least.

Smells of caramel malt and then a huge mixed bag of fruity and floral hoppy goodness. Pear, mango and peach with passionfruit and pineapple tang, all tropical and tasty. Mixes with the sweet malt nicely. Smells awesome.

Taste is sweet upfront, honey coming through on the malt base then lots of fruit salad hops - peach mostly with passionfruit and pine notes as well. Touch of bitterness and a slight boozey notes on the back. I like it but I don't adore it; it delivers what it promises.

Carbonation is a little fizzy but the thickish body and warming alcohol counterbalances. Decent.

Great drop. Big, boozey, but with lots of character complexity to back it up.