Merchant Brewing Co
from Australia (New South Wales)
Fruit Tingle
5.7% American Wild Ale from Merchant Brewing Co
Overall:
71 / 100
(Very Good)
Kettle-soured ale. I don't know; I never really know how to classify these GABS beers, this one seems too big to call it a Berliner Weiss, and it's all about the adjuncts too. Raspberry, citrus peel, lactose and blue pea flowers were added to give it a distinctive purple colour, designed to resemble a Fruit Tingle cocktail. Tried at GABS in a sampler.

Pours a purple colour; have had more vibrant purple colours at the festival, kind of pale violet with a touch of red to it. Very cloudy and no head at all. Interesting colour but dull otherwise.

Smells tangy, fruity, slightly sour. Quite pleasant really, with a touch of pear and green apple and a slight vanilla sweetness. Not bad.

Taste is great. Tangy, tingly, yeah quite cocktail-esque but also reminiscent of the fruit tingle lollies which I assume the cocktail that this is imitating is imitating. Citric notes, with grapefruit, lemon and orange zest. Underlying musky rosewater note. Nostalgically nice and good sour beer characters too.

Good body, decent texture as it goes down, no sharpness. 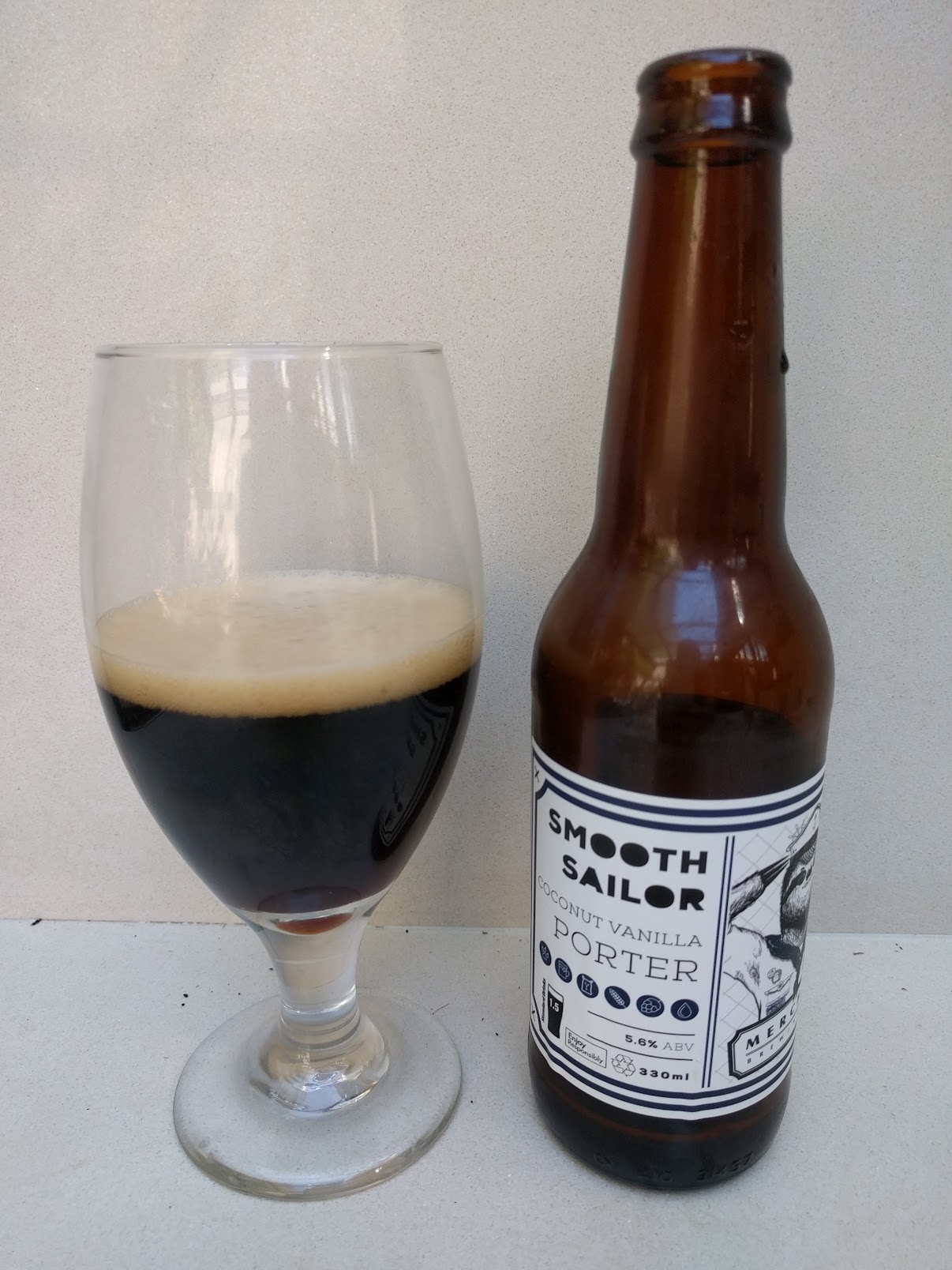 Pours a deep mahogany-tinged brown, with a fluffy, but bubbly head of beige that leaves specks of lace. Body has some slickness to it, but mostly it looks pretty light and fluid. Looks decent enough.

Nose is pleasant. There's a toastiness to it which helps make it feel substantial, with a bit of roast and coffee. There's maybe subtle hints of coconut and vanilla, but they're mostly hidden behind what's a fairly standard but solid porter aroma.

Taste is pretty solid too, at least on the front. There's a roastiness that is prominent, but it has slightly too light a body, which means the dark grains project a sense of acidity. The back is a bit too thin, without the malt structure that would make it feel dry, toasty and coherent. Vanilla and coconut are nowhere to be found.

Overall, yeah, I'm not super impressed. Merchant have done some reasonable things in the past for me, but this is a misstep as far as I'm concerned. It's a fairly generic porter, without the promised accentuations.
appearance: 3.25 | aroma: 3.5 | taste: 3.25 | feel: 2.5 | drinkability: 3.25
When Sloths Cry Golden Ale
5.2% American Pale Ale from Merchant Brewing Co
Overall:
62 / 100
(Decent)
On tap at Cammeray Craft.

Cloudy orange colour, white head; dense with some visible bubbles. Decent film of lace. Looks more like a pale ale or even IPA than 'golden', but it's a colour I like so I won't quibble.

Smells fruity hoppy. Melon notes abound with a fair bit of citrus as well. Grapefruit, resin. Largely cantaloupe heavy though. Touch of sickly caramel but not too much. Pretty pleasant.

Taste is somewhat sweet and malty upfront, touch of cake batter. Hops rise on the mid with some bitter citrus and some of that cantaloupe note as well. Late mid develops some POR notes maybe? Earthy bitterness with some strong resin as well. Finishes with a bit too much hang but a decent citric cleaning up. Possibly a little soapy.

Fluid, with a sharp pull from hops on the back. Not quite enough malt base to carry it.

Smells sharply citric. Lots of US West Coast character; mandarin, grapefrut and a touch of pepper. Maybe a touch of champagne too. Pleasant.

Taste is hoppy, start to finish. Sharp upfront with lenon pith and grapefruit, then mellows towards mid and actually sweetens up on the back with a candied orange peel character. Touch nutty on the back too. Intriguing and quaffable. Ballsy that later gets soft and sensitive and cries at the end of Sleepless in Seattle.

Bit of body but not loads. Little sharp hop pull at the back.