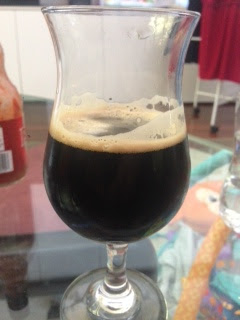 Pours a dark brown with pale beige head, quite foamy and nice. Sinks to a thin crown with some thin lace left behind. Some lovely cascade bubbling when the head is tilted. Looks very nice.

Taste is sweet throughout, and develops beautifully. Caramel, just a touch of burnt sugar flavour that leads into midway where that spice melange blossoms. Cloves, fennel, and turmeric with some cinnamon, nutmeg and vanilla for sweetness. Chocolate fenugreek on the back. The spice is complex and leaves a slight residual bite on the back, but it mostly just elevates and accentuates the underlying malty sweetness that abounds. Beautiful flavours and a gorgeous dessert beer.

Smooth, thick with a bit of bite at the back. Maybe a touch too thick as it delves into syrupy, but not quite enough to be stodgy.

Love this beer. It's sweet and desserty, with bags of character and just a hell of a lot of likeability. Winter warmer for sure and could just see so many foods - from rich desserts to fresh fruity desserts and even some red meat dishes - popping off the plate with this pairing.

Note: Obviously tasting blind, I didn't pick up that it was a gingerbread beer. Possibly to its detriment, but in this case as my experience still fell in the same ballpark I'm happy to give it the score I gave it, even though I judged it to be a big spiced beer rather than anything more specific.
appearance: 4.25 | aroma: 4.5 | taste: 4.5 | feel: 3.75 | drinkability: 4.5
Gingerbread Stout
10.0% American Imperial Stout from Buffalo Bayou Brewing Co
Overall:
81 / 100
(Excellent) 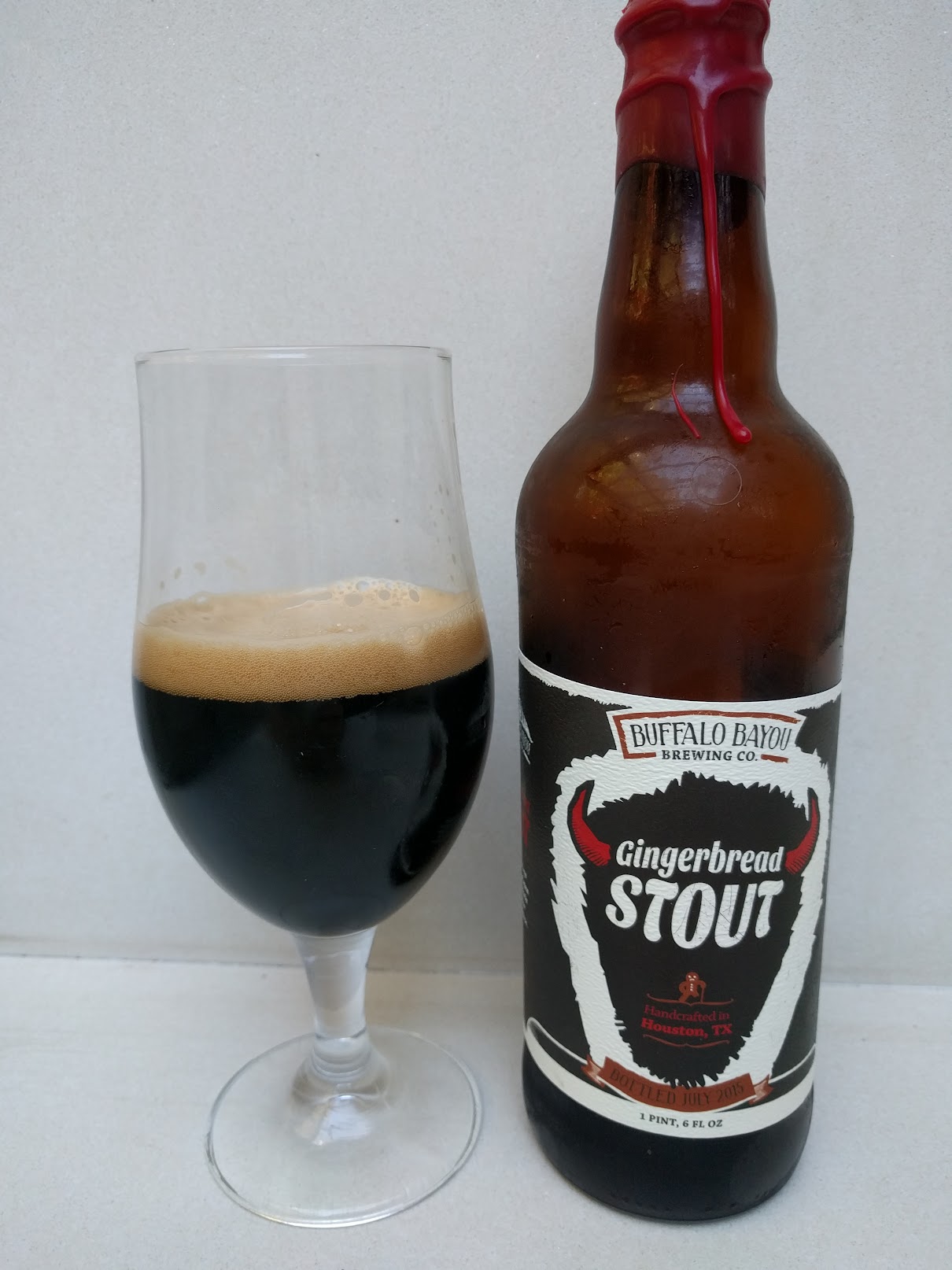 Pours a rich brown colour, with a foamy head of mocha. It leaves good lace, settling out to a pocked film with islands of bubbles. Body is fairly firm, but also pretty fluid, leaving long streaks of carbonation when tilted, but also moving swiftly in the glass. Looks good.

Smell is rich and sweet. Lots of all the characters you'd want in a gingerbread stout. Molasses, dried ginger powder, and hints of nutmeg, mace and anise. It's sweet and spicy in all the right ways, coupled with a rich malt note that reminds us of its stylistic origins.

Taste is very smooth, but peppered with spicy booze notes and (if you'll forgive the description) spicy spice notes. There's a slight uptick of aniseed on the front, but by the back, the rich sweetness has blunted it, leaving us with warming characters of cinnamon, ginger and vanilla. The aftertaste is perfect—it's the lingering sweet-spicy flavours that stay in the air after baking a batch of gingerbread men.

It's a beer that's perfectly described by it's name. This is exactly what you'd want from a beer that describes itself this way. Moreover, it's an idea that actually works very well in practice. The gingerbread character is beautifully drawn, and fits very nicely into the rich, sweet brew. This is a cracker.
appearance: 4.0 | aroma: 4.25 | taste: 4.25 | feel: 4.25 | drinkability: 4.25
Meer Koebel
9.1% Belgian IPA from Buffalo Bayou Brewing Co
Overall:
63 / 100
(Solid) 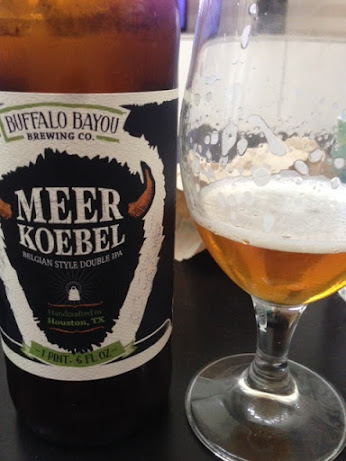 Pours a burnished orange-amber colour. Head is off-white-yellow, sparse bubbling on top but some pleasant sticky lacing. Not bad, could maybe use some more head.

Taste is malty too, plenty of grain. Touch of citrus late-mid and a touch of pepper as well. Yeah, starts fairly grainy, with plenty of sharp notes late that aren't too overblown. Just nice citrus twang and a piquant, spicy note late. At the same time, I don't love it; it seems a bit too gloopy and sweet, even with the hops. Maybe they seem a little oily or resinous too and that exacerbates the sweetness. 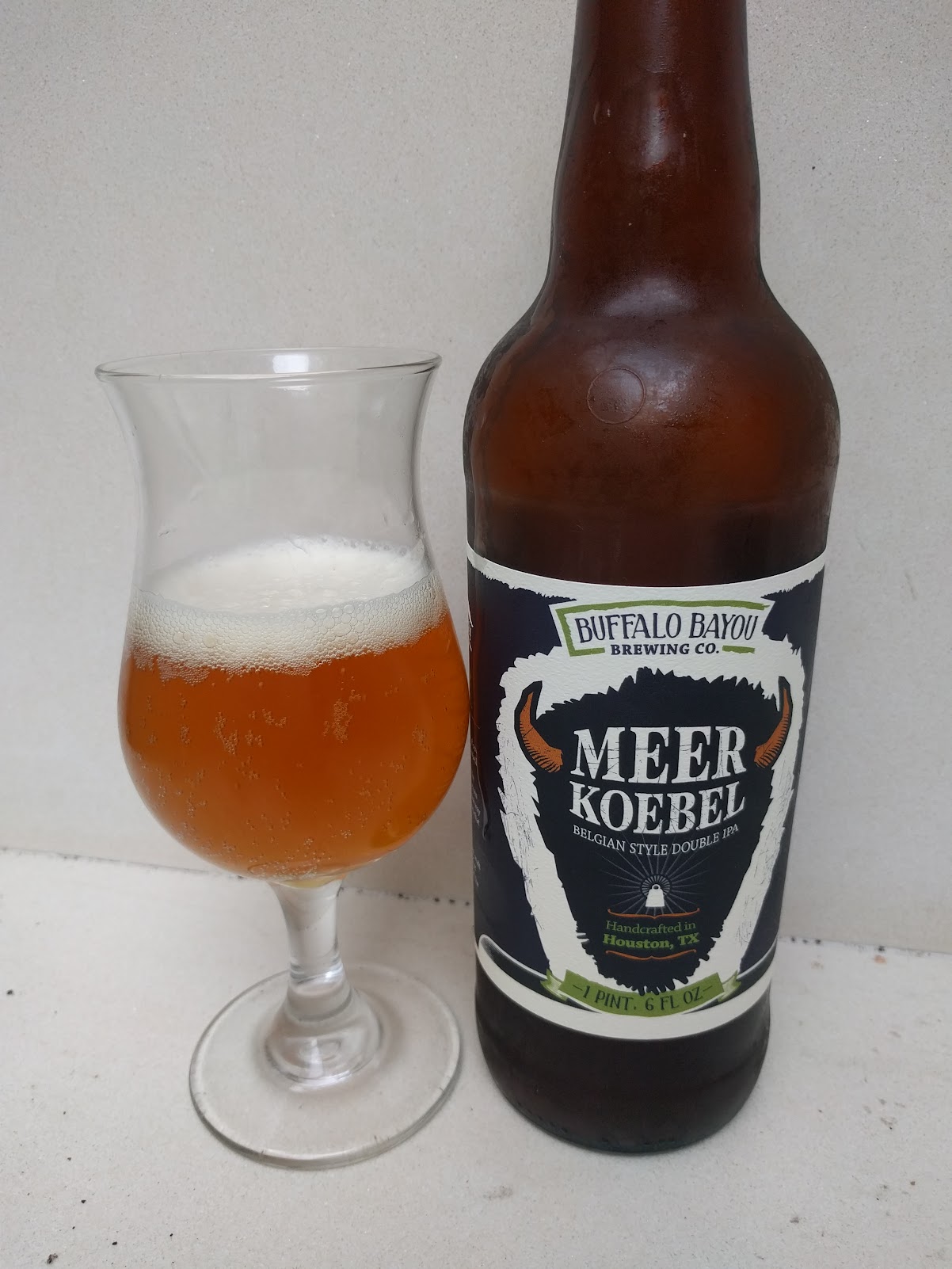 22oz brown bomber purchased from Spec's in Houston, TX. Brought back to Sydney where I shared it with Sam.

Pours a mildly haze golden orange colour, with a coarse, slightly frothy head of off-white that leaves fine, intricate lace. As it settles, it becomes more of a film, but stays fairly persistently. Looks pretty good all up.

Nose is quite pleasant. There are some fragrant, slightly fruity, but more herbal hops, and a slightly syrupy sweetness underpinning everything. This turns slightly metallic and a touch oxidised, but this is often a character that goes hand-in-hand with Belgian yeast, so it doesn't seem out of place. Nice enough.

Disappointingly, this character feels a bit more prominent on the palate, giving it a rather rummy or dark sugar note, balanced by a rather pronounced, bitter herbal hop character on the back. It means that those fruit tones are mostly gone. Alcohol is actually quite well hidden at least, which is a bit surprising, given some of the other characters.

Feel is full but a bit sharp, and actually with a touch of heat—although you can't taste the booze, you can apparently feel it.

Overall, it's okay. There are things to like and things that make me a bit skeptical. I like that it doesn't feel like 9% ABV, but at the same time you question whether it warrants being 9% ABV as a result. Happy enough to have sampled it—unlikely to get it again.
appearance: 4.0 | aroma: 3.75 | taste: 3.25 | feel: 3.5 | drinkability: 3.25
Red Velvet Stout
6.5% Milk / Sweet Stout from Buffalo Bayou Brewing Co
Overall:
58 / 100
(Decent)
Pours a dark brown, cola-coloured at the edge. Head is creamy-beige, whispy cloud on the top. Specks of lace. Looks OK.

Taste is roasty upfront, then gets oddly sour at the back. Yeah, some espresso - spicy, mixing with chocolate on the mid, then sharp, acidic sensation late-mid, actually not that sharp but just out of place. Then finishes chocolatey again so I have no idea what it even was, and I'm now confused.

Lot of pull on the back. Decent body, but I don't love it.

Smells like my go-to beer smell. Nice caramelised malt notes with cake batter, and decent citric hop notes for balance. A touch too sweet, but good.

Taste has a tang from the get-go. Underlying caramel notes, touch of buttery, but the tangy hops start and then get sharper towards the back. A little bit too much, gets a bit pithy and acidic with a touch of astringency. Bit too much of that one hop note that I otherwise like.

Bit of harsh texture, very drying at the back. Possible a touch boozey as well. 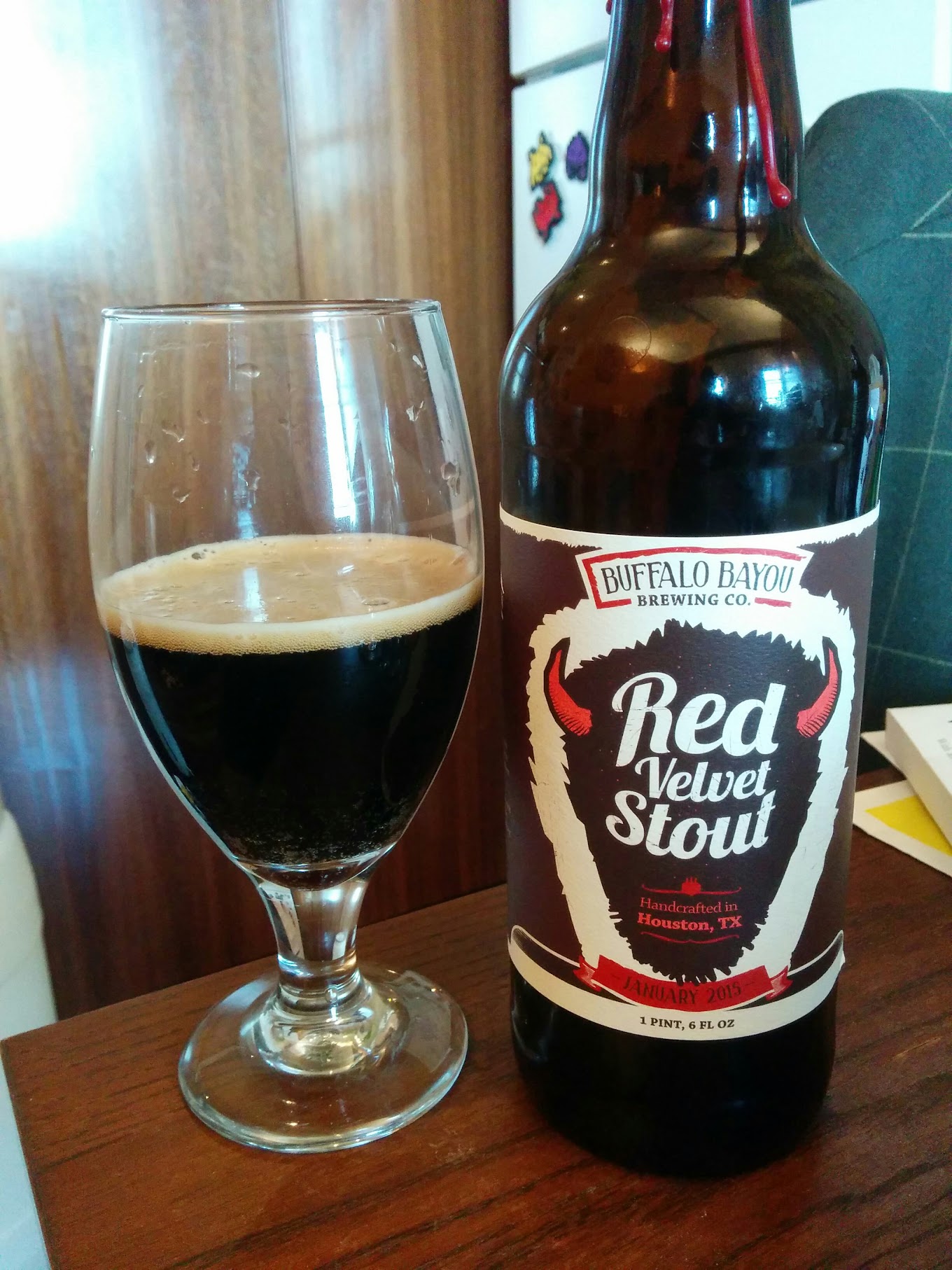 22oz capped and wax-sealed bottle purchased from Spec's in Austin. Brought back to Sydney, where I cracked it with Sam and Rich.

Pours a deep, opaque brown, tinged with orange at the very edges. Head is a fine, thin layer of froth that leaves some coarse bubbles at the rim. Some mild streaks of lace. Body is a tad light. Looks okay though.

Nose is toasty, but with a dark malt character that nearly tends towards black olives. Indeed, there's a slight acidic quality to it that doesn't sit quite right. Still, under that you can see where they're coming from with the name, with a mild vanilla smoothness that actually causes some of the toastier notes to seem jarring. It's okay, no better.

Taste is actually pretty similar. There's a definite metallic or chewy tinfoil character running through this, which undermines the buttery vanilla cake note I think they were going for. It attaches itself enough to the roastiness that you think it's intentional, but it still has an unnerving sense of wrongness. Back has a touch of aniseed that accentuates the metallic note as well. It's disappointing.

Feel is really quite thin, almost fizzy. This, once again, undermines a lot of the nice things in this beer.

Wow, this was a big disappointment to me. Lovely presentation, but there was just something off about this beer, and it really stuck through from start to finish. I feel like the concept was solid, but there was something sadly awry in its execution. Who knows, perhaps another bottle is significantly better.
appearance: 3.5 | aroma: 3.0 | taste: 2.75 | feel: 2.5 | drinkability: 3.0
More Cowbell
9.0% Double IPA from Buffalo Bayou Brewing Co
Overall:
73 / 100
(Very Good) 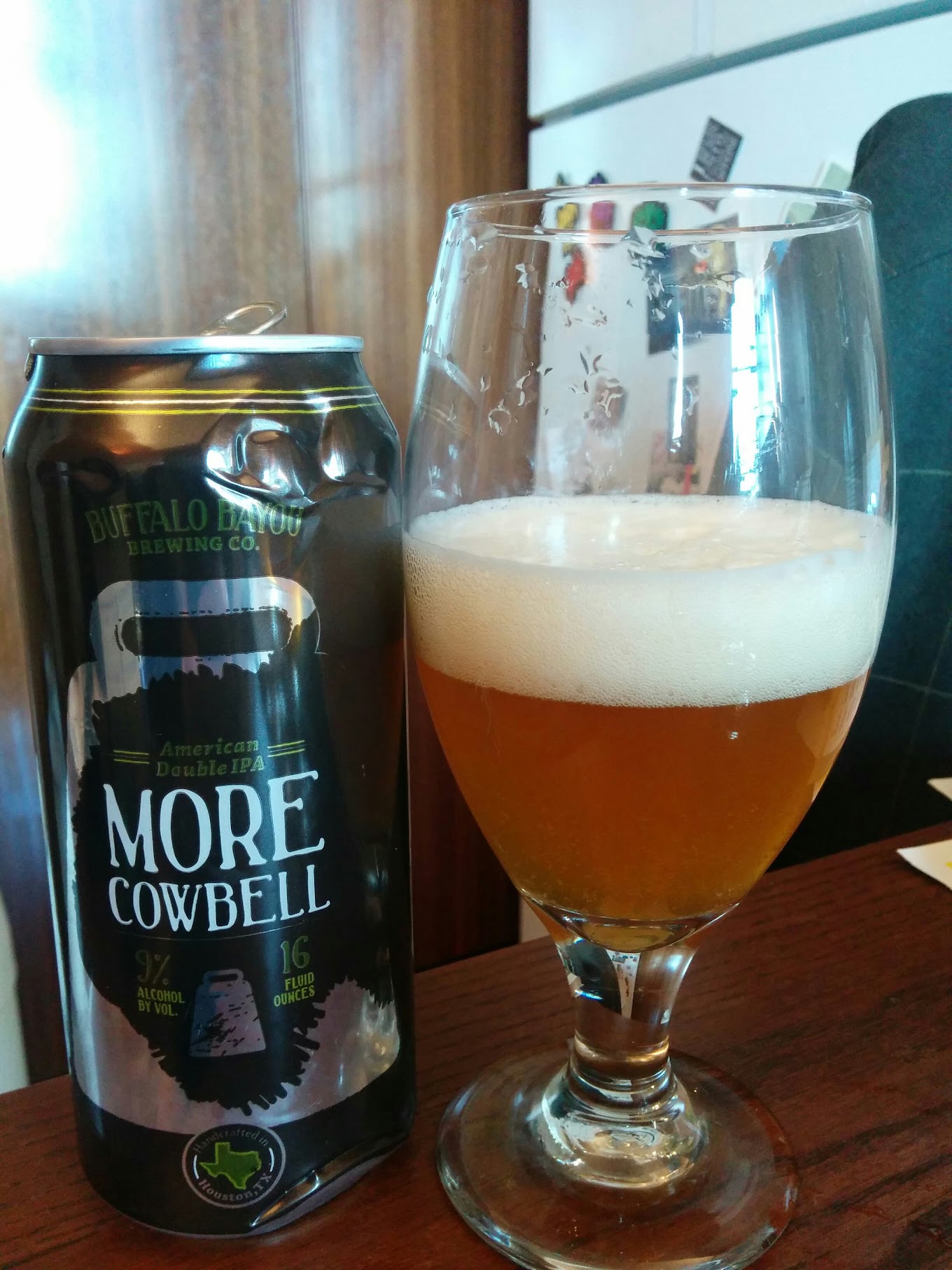 Tall 16oz can purchased from WhichCraft in Austin. Brought back to Sydney where I shared it with Sam and Rich during a brewday.

Pours a pleasantly hazed golden colour, with a thick and full head of yellowed off-white that holds some larger pocked bubbles. Lacing is sheeting and fairly full. Carbonation forms in coarse bubbles as it streams, but looks finer and powdery when tilted. Looks pretty damn good.

Nose is solid, with rounded sweet fruit characters, giving a hint of citrus but none of the sharpness. Slight dusty floury note does come through a little unfortunately, but there's enough other notes to block it out. Some peachskin and a little melon, perhaps. It's still pretty nice.

Taste is also pretty solid. There's a firm, rigid backbone of bitterness through the centre of the palate, which really help stake it out as a bold, unapologetic beer. This is bolstered to some degree by a firm but neutral malt character, providing body and slickness, and only just enough malt sweetness for balance. Slight underripe fruit notes come through on the back, giving a greenness that mingles with lingering malt to provide a rather juicy finish.

Feel is firm, and a little heavier that it really needs, but it helps it stake its claim as a full double IPA at least.