Pours a pale gold colour, kinda hazy. Head is white, thin and disappointing with just a thin rim of lace left behind. Nice cascade when tilted though. Looks a bit bland, but not bad.

Smells very curious. Tart, funky, with a sharp acidity, some champagne and corporeal characters around the edge. Some really sharp fresh oregano and other herbal notes; tobacco even. Nice fruity freshness too, like orangey but also mango. Fuck what is that. It's a really pleasant nose, whatever is being used. Buttery oak, too, is big. Enjoyable.

Taste is so tangy, holy shit. And so oaky too. Big buttery oak from the start, that develops some fruity sweetness, orange and maybe some passionfruit in there. Yeah, maybe some woody and earthy bitterness midway but that oak just stomps on everything, it's like a weird lingering flavour that permeates everything. Makes it oaky-dry on the back, oaky sweet midway. Yeah I've completely lost track of what the base beer is, it just tastes like oak. Slightly tart too.

Smooth, very smooth, slightly dry on the back. Yeah this is where oak can really work.

This is a weird beer; it kind of goes up and down and I enjoyed parts of it and then didn't enjoy other parts, and I feel like there were enjoyable characters on the nose but they just got strangled by this subjugating oak. In the end a bit of an enjoyable mess.
appearance: 3.0 | aroma: 4.25 | taste: 3.0 | feel: 4.0 | drinkability: 3.5
Cellar Wizard Series - Bourbon Barrel Aged Farmhouse Ale
6.9% Saison from Shady Oak Barrel House
Overall:
40 / 100
(Not Great) 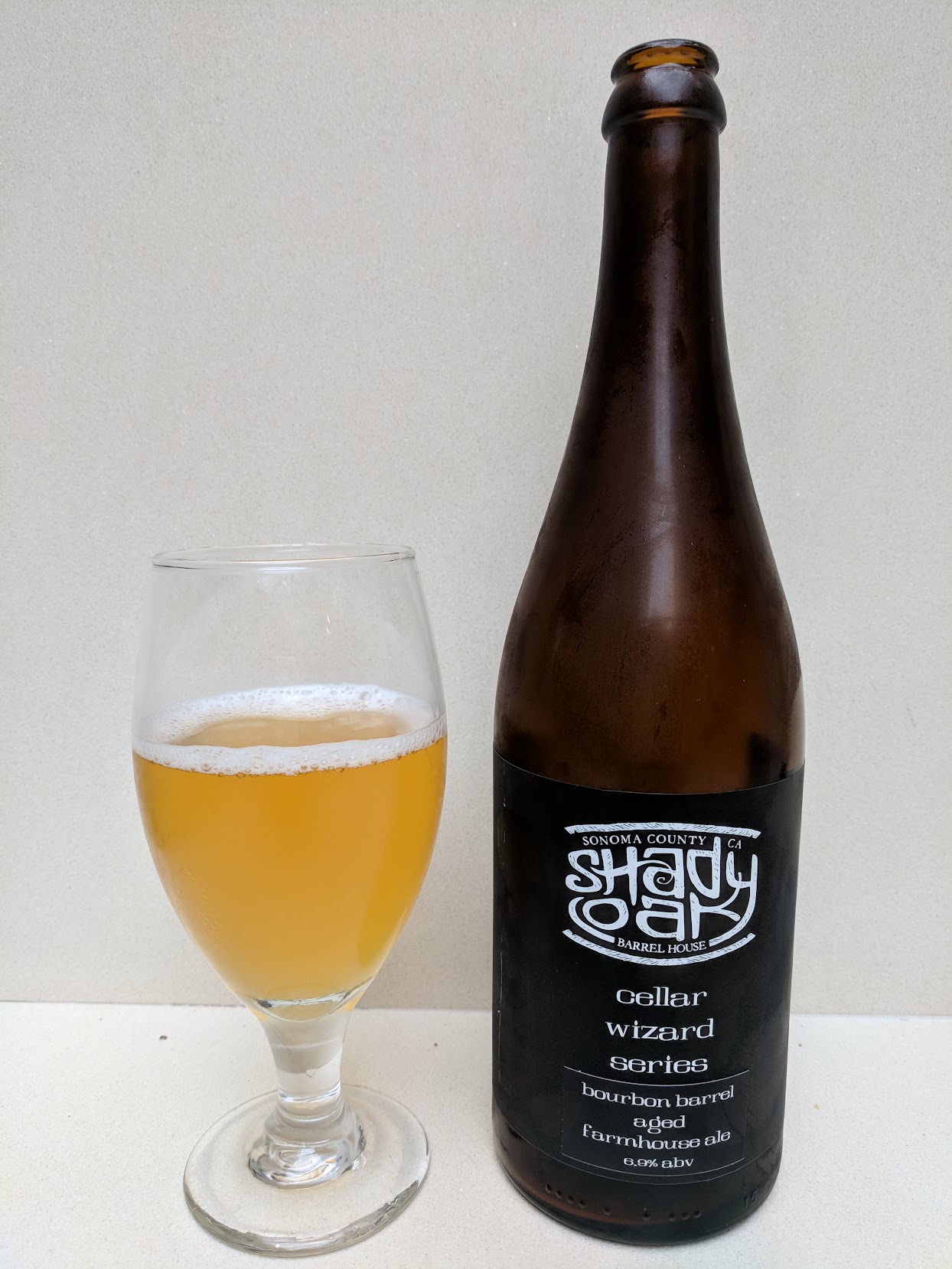 Pours a very clear golden colour, with a fine ring of white, formed from coarse bubbles. Carbonation is very fine, and the body has a little bit of weight to it. It looks decent enough—pretty standard, but decent.

Nose is interesting. There's a definite oak character to it, but there's also a distinct organic almost-acidity. It has a slight vegetative quality to it—more like crushing herbs than anything naturally acidic. The oak is a weird match though. It has lots of vanilla and sweetness to it, which seems to undermine the farmhouse characters.

Taste is actually kind of rank. It has the smooth, oaky vanilla characters from the barrel, but matched with the slight acidity of the saison, it gives it an unpleasant, lactic cheesiness. This is further compounded by a slight vinous note that comes from the oak combined with a slight hint of booze. There's almost a grape candy character in the finish which isw completely misplaced. Nope.

Feel is fine—it's a little thin, but it's smoothed by the oak.

Overall though, this is actually kind of unpleasant. The lactic note is way, way off—the cheesiness is unpleasant, and even if that wasn't there, I'm unconvinced that the confluence of flavours is something that would actually work. I'll say it again: Nope.
appearance: 3.5 | aroma: 3.5 | taste: 2.0 | feel: 3.25 | drinkability: 2.5
Bokonon
6.75% Saison from Shady Oak Barrel House
Overall:
35 / 100
(Nasty) 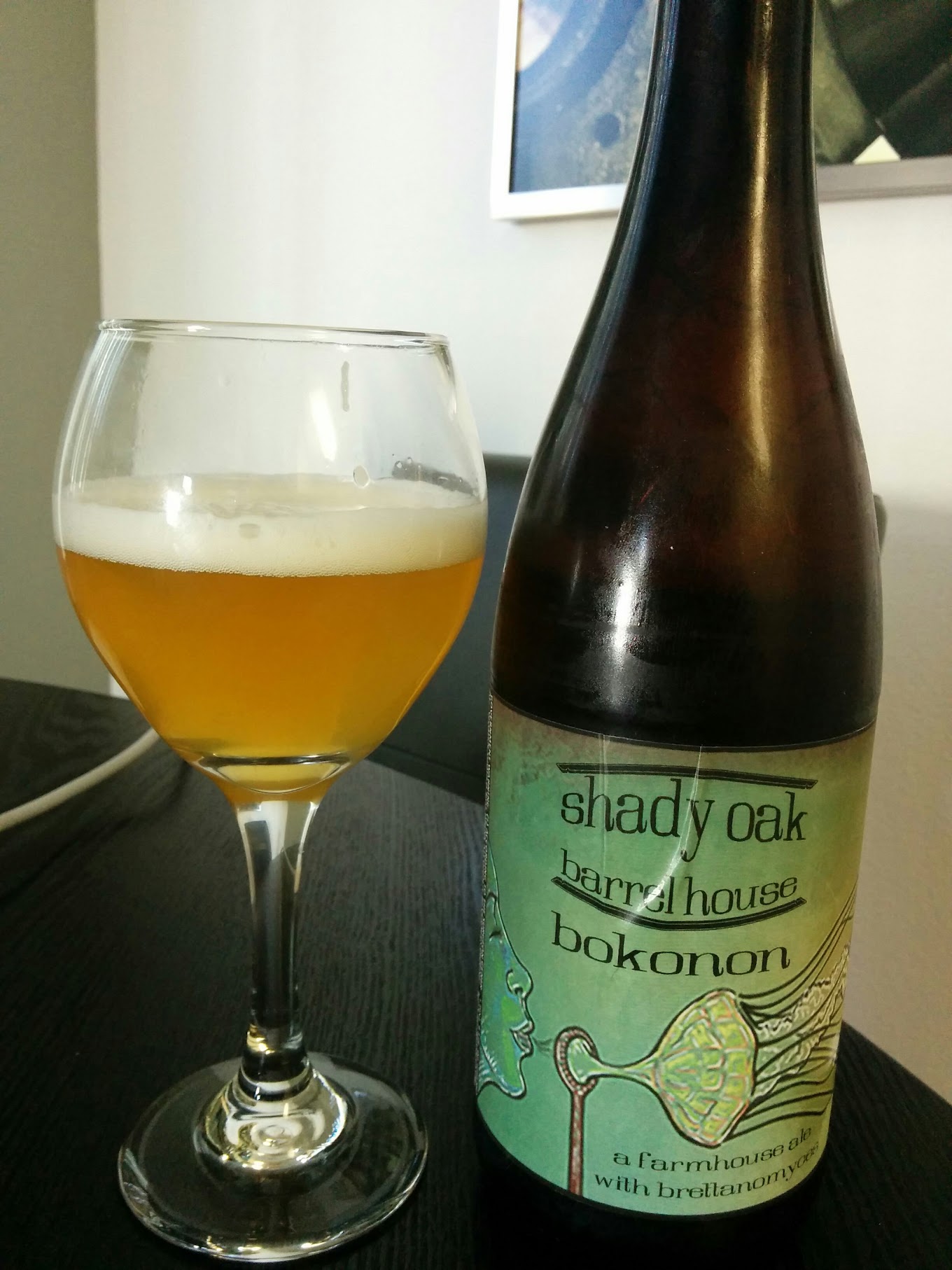 Nose initially smelled quite pleasant and broadly funky, but given just a little exposure to the air, it takes on some rather disappointing characteristics—specifically, it has a noticeable tart cider-like note, and an even more worrying character of chlorine and chlorophenols. If you swirl it enough, you can mask it—with more of the slightly tart, slightly fruity notes coming through more strongly, but it's a worry that it's there, and it puts me off the beer a little.

Unfortunately, the taste doesn't alleviate this at all. There's an unpleasant plasticky note to it, along with a flavour like bitter almonds and medicine. This lingers on the back while the carbonation tries valiantly to pummel it into a touch more submission. Finish has chloriney notes of bandaids and plasticine.

The body is very fine and the carbonation is beautiful, however. It's a shame it has those unpleasant notes.

Overall. I just don't want to drink it. That's what it comes down to. There's something most certainly offputting about letting this beer linger in your mouth, and even more offputting about swallowing it. I'll pass, thankyou.
appearance: 4.25 | aroma: 2.5 | taste: 2.0 | feel: 4.0 | drinkability: 2.0