Bottle served blind by Jez on a brewday.

Pours a slightly cloudy pale orange colour with voluminous head. Yellow-tinged off-white in colour, like really quite yellow. Sinks unevenly but a bit meekly with a sort of soft foaminess seeming prevalent. Lacing is OK. Looks good, some flaws but good.

Smells tart and spicy. Some Brett notes, wild and funky with a touch of acid, and a sweet malty note at the back paired with nutmeg and cinnamon. Appealing. Appealing him off the sidewalk.

Taste starts off with a very foamy mouthfeel. Tart early and strong, with big acidic notes and some wild earthy barnyard flavour that gets sharp and astringent. Quite palate-stripping towards the back, with a lingering bitterness, somewhat tannic and a touch of organic grassy hay on the finish. Quite full-on, sort of bombards you with wild notes and doesn't really have enough nuance through the palate to balance it all out. It's quite blarey and obnoxious, with the subtleties of the nose just drowned in that dank bitter note that takes over. Disappointing especially after that appealing aroma.

Yeah, foamy upfront then big and sharp towards the back. Decently padded on the finish, though.

Bottle served blind by Jez on a brewday. I want it especially noted that this was blind, as the mint was demonstrably noticeable even not knowing beforehand that it was in there.

Pours a dark murky brown, with ochre-coloured head. Nice sticky consistency to it, foamy but grips the glass in tendrils. Not a whole lot of retention but otherwise looks good.

Smells stouty. Big roasty note with plenty of rich chocolate. Sweet, really, with a touch of vanilla and a mild nuttiness at the back. Pretty appealing.

Taste is also very chocolatey and nutty. Big sort of pecan character throughout, kind of sweet but also slightly woody. Chocolate all over it, rich and gooey with a very dainty mint character on the mid-palate that carries on to the finish. Roasty on the early-mid, and it lingers around to keep it grounded but otherwise it's just a big sweet gooey stout, and that light minty herbal freshness is superb. The palate generally is superb, or at least it's right in my wheelhouse.

Smooth, a little bit drying as it goes down. Leaves a little fuzz behind, but good body.

Drinks like a delicious choc mint slice, but really well handled so the flavours are all noticeable without being too overboard or dominated by one or the other, it's just a really gorgeous blend. Bit heavy at times but just really decadent and enjoyable as well.
appearance: 3.75 | aroma: 4.0 | taste: 4.75 | feel: 3.75 | drinkability: 4.25
Perennial / Prairie Dual Artisanship
6.9% Saison from Perennial Artisan Ales
Overall:
71 / 100
(Very Good) 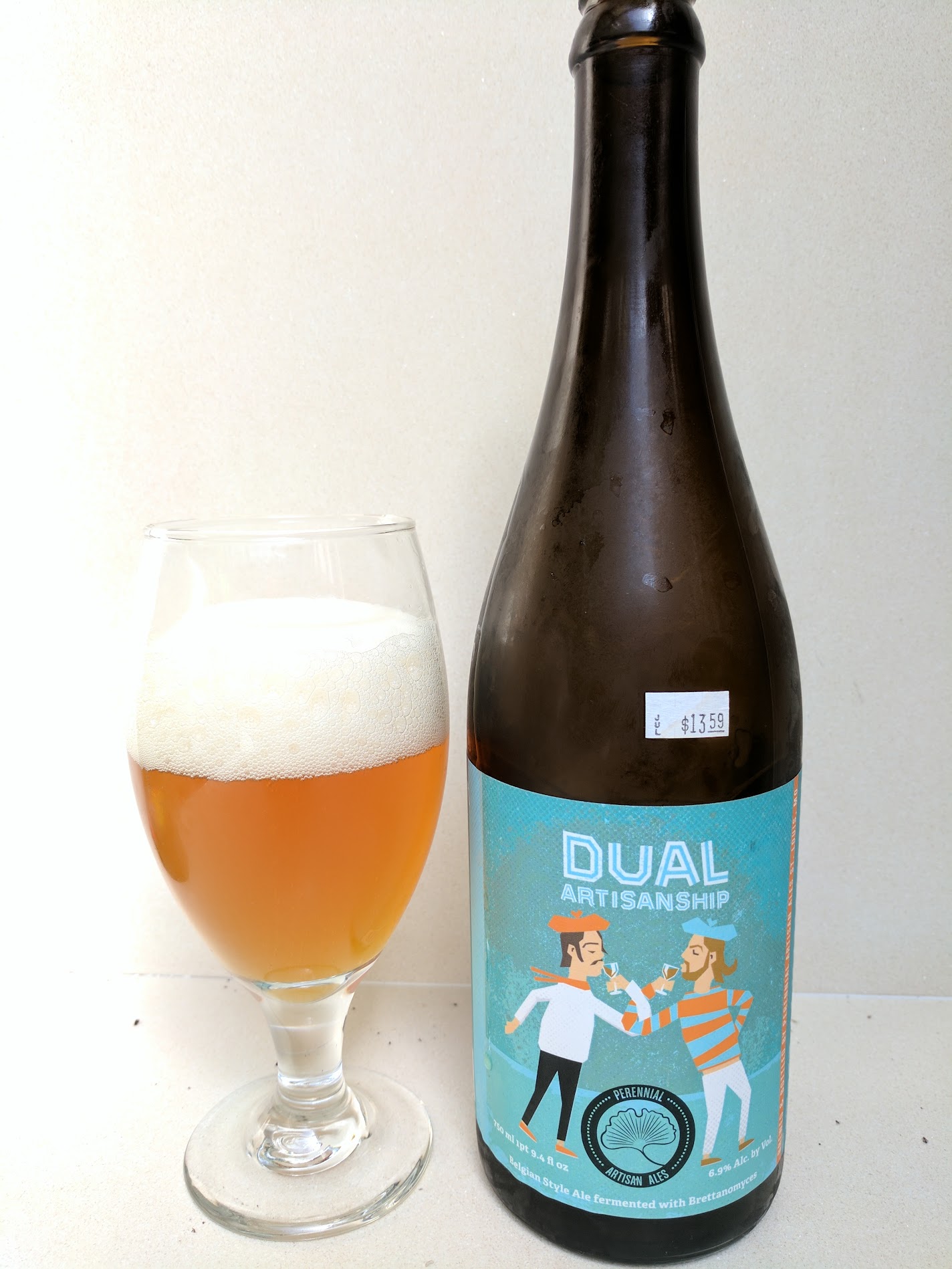 Pours a deep golden colour, thoroughly effervescent and very heady. It crests up quickly with a puff of off-white foam that leaves sketchy, sudsy lace. Carbonation is fervent and swift through a fairly light body. Looks the part.

Nose is brett-dominated, with a big, funky, semi-acidic character that leads to character of semi-ripe fruit and hay. There's almost a gueuze-like plastic character that comes through, with a frothiness that almost makes you smell the carbonation. Nice stuff.

Taste is really pleasantly subdued. Instead of the aggressive, bloating carbonation I was expecting, there's a real softness to the palate, this allows a tingle of flavour to express itself—some green guava, a little metallic sting and a lingering bitterness. The back is genuinely quite earthy, and it takes a bit of getting used to. The aftertaste twists the earthiness of the brett with a slight zing of metallic hops. It's always enlivened by a fine but vivid carbonation.

Overall, this is good stuff. The earthiness is perhaps just a tad too much, and it doesn't integrate that well with the rest of the flavours. But there's lots going on, and there's plenty of complexity to explore. Both of these guys, at least, know what they're doing.
appearance: 4.0 | aroma: 4.0 | taste: 3.75 | feel: 4.0 | drinkability: 3.75
17 - Mint Chocolate Stout
10.0% American Imperial Stout from Perennial Artisan Ales
Overall:
86 / 100
(Exceptional) 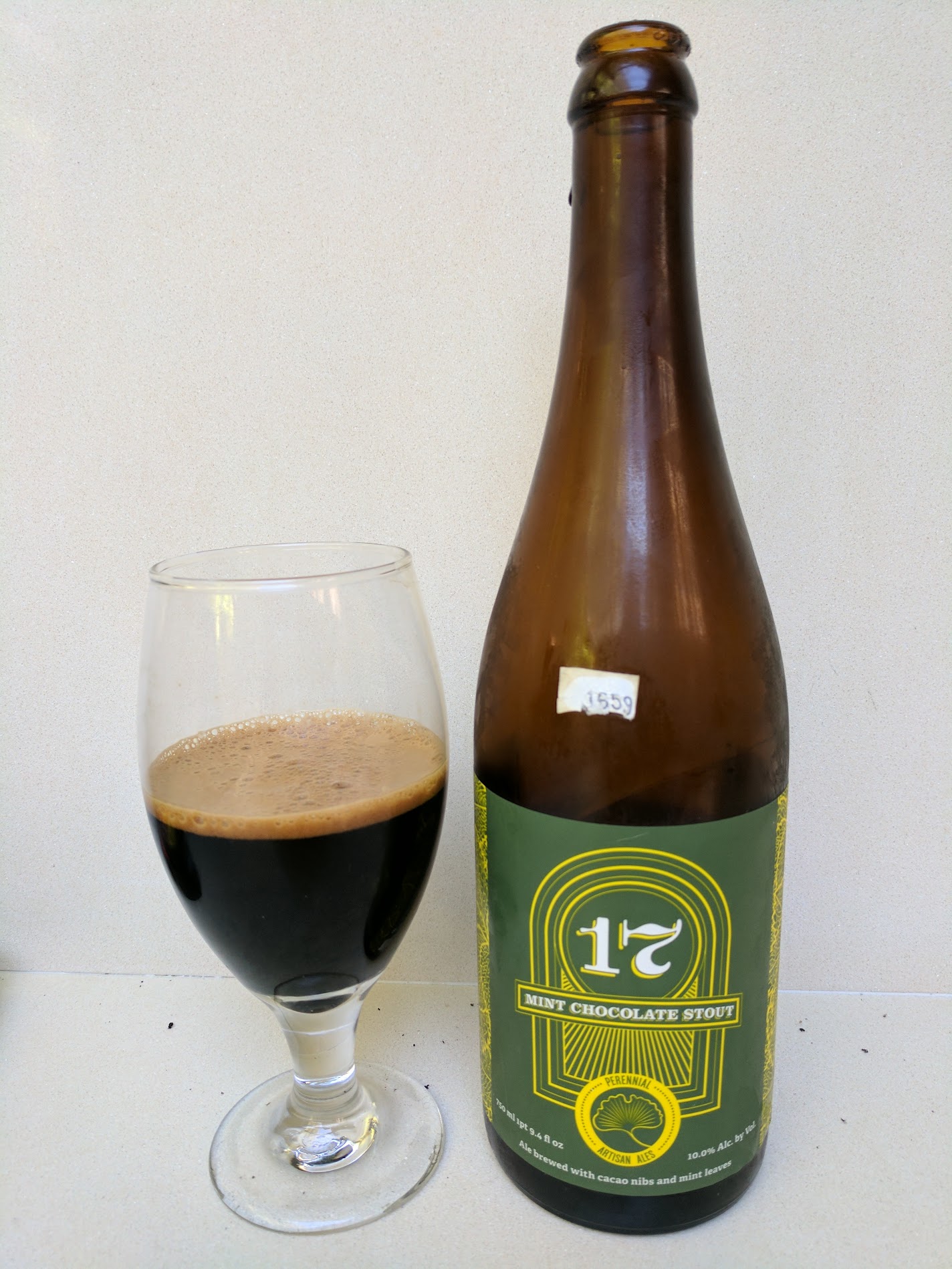 Pours a gooey, silky deep black-brown, that flows out of the bottle like an ebony cord. Head forms a deep, deep melted chocolate brown across the top of the glass. Lacing forms some pleasant minor streaks. Body is glossy and rich. Looks really good.

Nose is also impressive. There's a deep chocolatey richness to it, with an associated bittersweet character that suggest depth and sophistication. But atop this is a combination of the fragrant, sharp mint, and the booze, which gives a lift and emphasis to the herb. It's very nice.

Taste is better, and for all the right reasons. There's a lovely slickness to the body, and a judicious amount of sweetness from the malt—but this works more towards emphasising the chocolate characters, which are dark and slightly bitter as well, and so they create a kind of inherent balance. The mint, on the other hand, is an exquisite and unexpected addition, giving a fragrant, herbal and refreshing elevation to the beer. It makes it spring to life.

Feel is glossy and slick. It's not overly heavy, and the mint leaves a noticeable tingle on the back of the throat. But it still feels luxurious.

Overall, I'm very impressed. This is a slick, really well-made beer, with an addition that makes it pop. Moreover, the addition seems so intrinsic to the beer as a whole that it surprises me that it's so unusual as it is. Great stuff.
appearance: 4.5 | aroma: 4.25 | taste: 4.5 | feel: 4.5 | drinkability: 4.5
Pineapple Kumquat Berliner Weisse
4.2% Berliner Weissbier from Perennial Artisan Ales
Overall:
74 / 100
(Very Good) 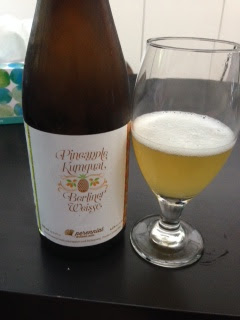 Bottle poured for me by Jez.

Pours a champagney yellow colour, small bubbly head that sinks to nothing, can get a few loose bubbles with a swill. Some isolated pockets of bead in the glass and no real lace at all. Looks either bad or very tart.

Yes, it's tart, and wonderfully so. Big meaty bretty aroma with tart vinegar, citrus and earthy lucerne notes. Herbal too, plus some passion mango and oregano. Big sour complexity but not overly astringent, has a good underlying sweetness that makes it delectable.

Taste is quite tart from the get-go. Vinegary with an edge of citrus, it travels, via champagne flavours, to the mid-palate where it's quite sweet and fruity, with notes of mango and lemon, possibly some agave notes as well. Finishes dry/sour, again slightly vinous, with a touch of French oak, woody and slightly buttery-sweet. Clean on the back. Perhaps doesn't quite reach the highs of the nose but is very pleasant indeed.

Sizzly on the front and slightly dry-sharp on the finish. Touch of bubbly texture. Bit harsh but alright. 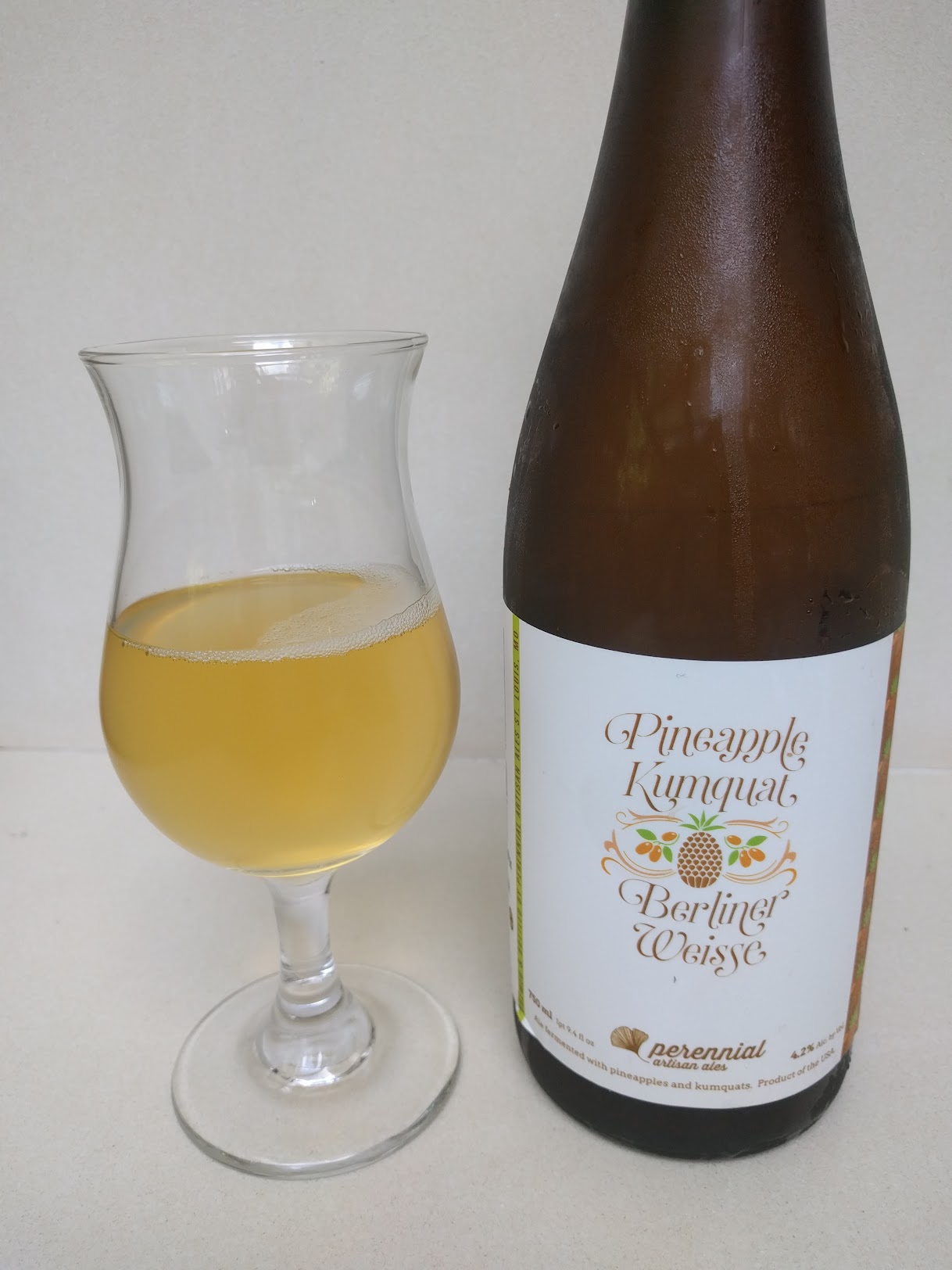 750ml brown bottle purchased from Healthy Spirits in San Francisco. Shared with Sam back in Sydney.

Pours a mildly hazed pale straw colour, with a very fizzy head of white bubbles tht coalesce like soda and end up leaving not head at all. Some persistent carbonation leaves a thin bubbling around the edge. Body is light. Looks okay, but trending towards insipid.

Nose is a little bit disappointing. I mean, in fact, it's a reasonable berliner weisse nose, with some mild tartness and a suggestion of lacto, tending towards vinous acidity. But it's also completely lacking the fruit characters it advertises on the bottle. Ok, so maybe if you're really looking for it you can convince yourself there's a slight pineapple note, and maybe part of the acidity comes from kumquats. But it's so subtle as to be pointless. I'm a bit underwhelmed.

Taste is similar. There's an overwhelming emptiness on the palate, coming partially from very high carbonation, partially from the hole lacto leaves in the mid-palate, and partially because you end up searching in vain again for the pineapple and kumquat and are left floundering in the void. In reality, it's quite a clean Berliner palate, with a building tart lacto finish and no harsh grainy characters like you often get in an improperly performed sour mash. But honestly, again, it's not very interesting.

Feel is almost what you expect, but when there's so little interest, a perversely thin body pocked with aggressive carbonation doesn't do it any favours.

Overall, I'll pass, thanks. This isn't terribly interesting in any case, and it's a woeful disappointment when you're looking for the characters it promises. There are better BWs out there anyway, and really, that's all this is.
appearance: 3.0 | aroma: 3.0 | taste: 3.0 | feel: 2.0 | drinkability: 3.0
Stefon
7.1% Saison from Perennial Artisan Ales
Overall:
67 / 100
(Solid) 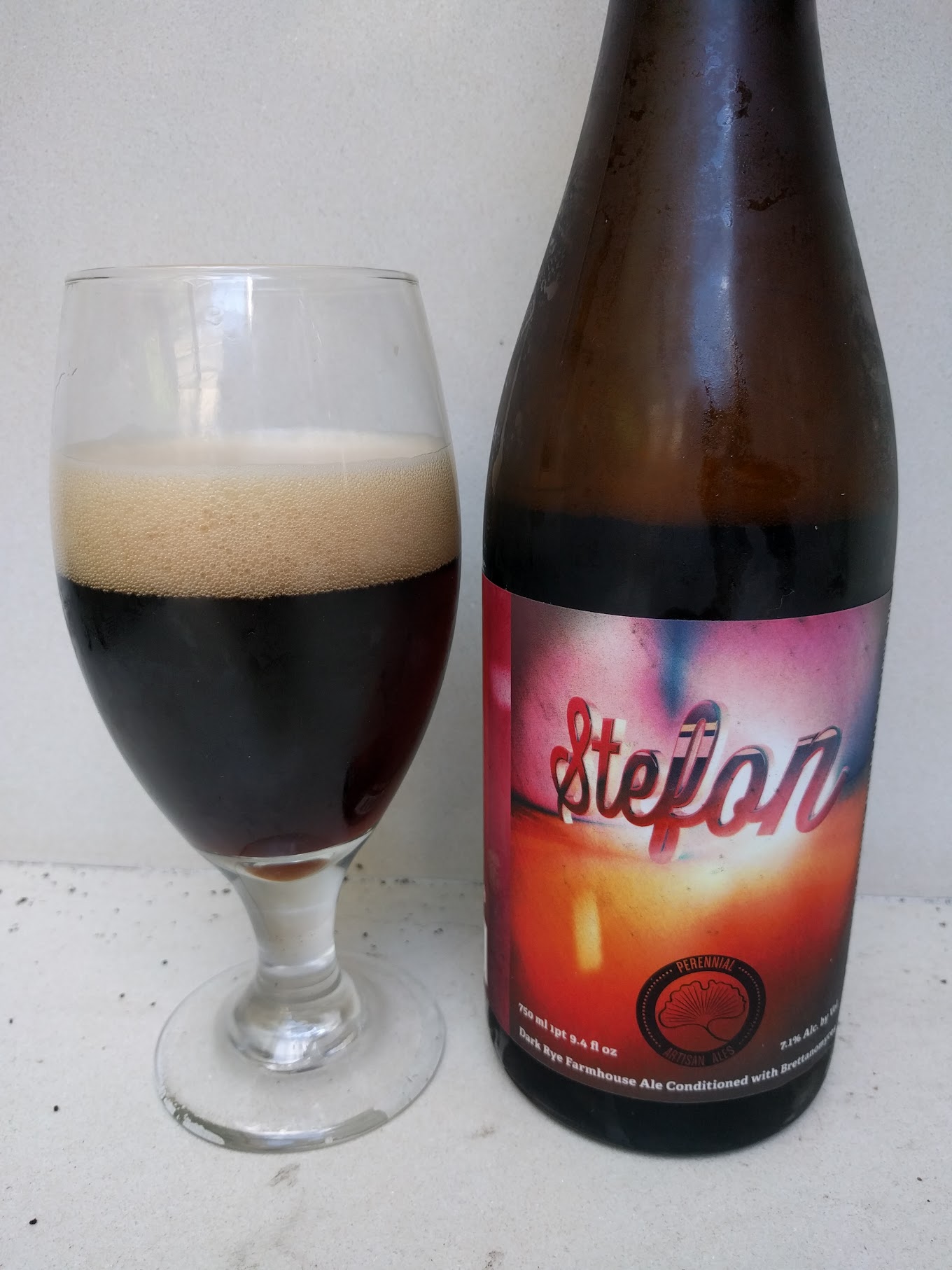 Pours a deep brown, dark enough to be fairly black except at the edges. Head is foamy and full, but running out of steam pretty quickly and leaving not a lot behind in its wake. Body has a bit of heft to it, but the carbonation seems to be a bit lacking, and not really sticking around when tilted. Looks decent though.

Nose is a little spicy and dark, with a bit of caraway and anise. Some mild rounded characters give a slightly Belgian yeast edge, but surprisingly not a lot of Brett. There are some interesting deep savoury spice characters which give some interest, but overall it's not very punchy and in your face.

Taste is decent, but surprisingly empty. There's a slightly frothy feeling to the whole thing, as though there's plenty of air in it which stretches out all the other characters. There's some of that caraway spice, a little dark rye bread and some mild dry grain notes. But it also has an emptiness; an ephemeral kind of volume to it that adds time to the palate, but not a lot of new flavours or complexities.

Feel is similar. It feels frothy and empty, which would be good if there were something to fill the void.

Overall. I'm actually a little disappointed. There's some nice characters to it, but it doesn't really integrate into something really interesting. Mostly, it feels like there's a lot of scope for something to be better, and it just doesn't deliver.
appearance: 3.5 | aroma: 3.75 | taste: 3.75 | feel: 3.5 | drinkability: 3.5