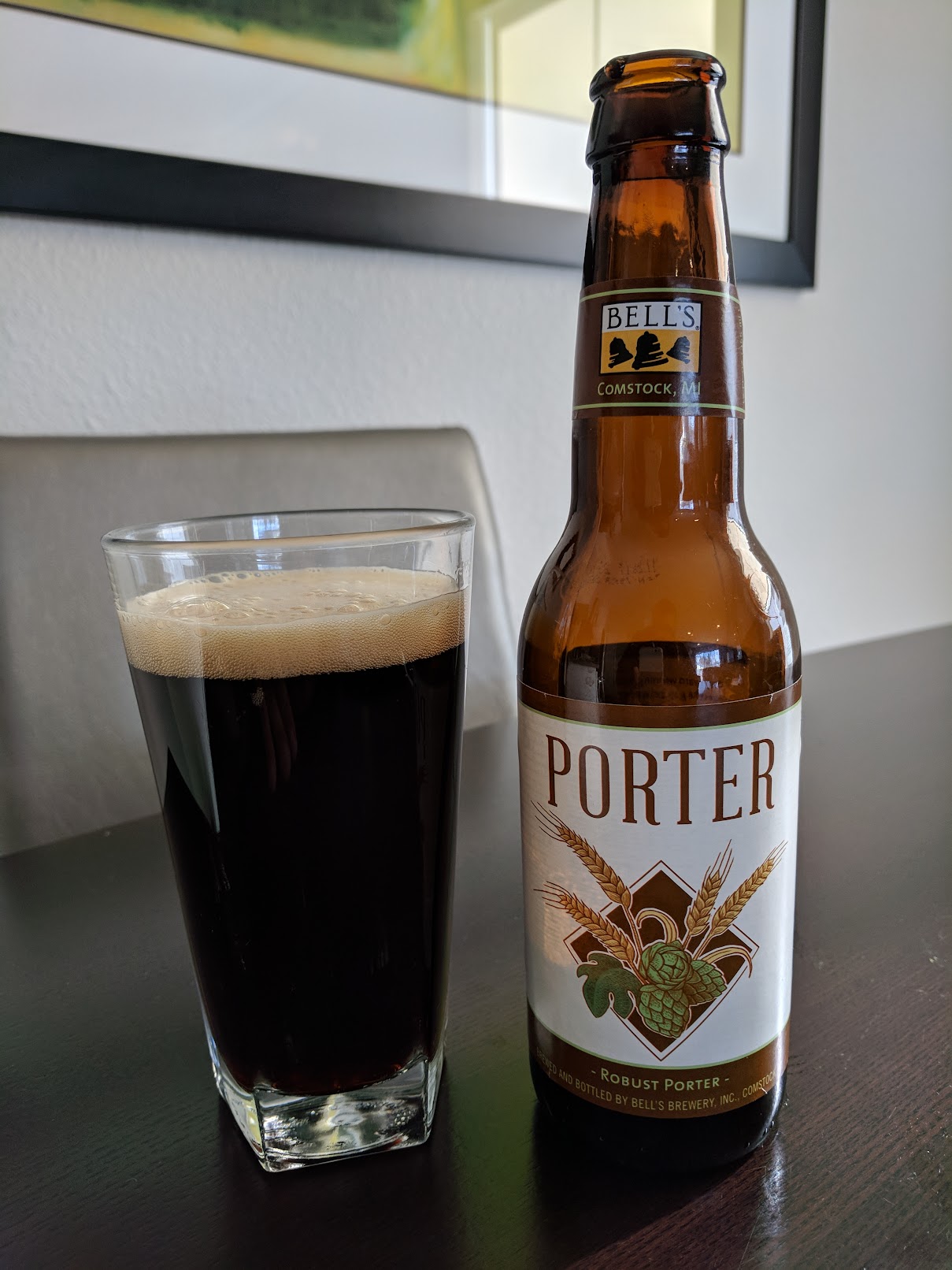 Nose is pleasant. There's a nutty sweetness that comes through, but doesn't overwhelms the tougher, darker roast notes. These are very pleasantly added to the mix, which gives it a depth and sophistication. But it's also got that creaminess, that sweetness, that makes it seem warm and approachable too. I'm a fan.

Taste is also good. It's smooth and long from the front to the back, with less of the nuttiness and less of the sweetness. It comes across as less complex as a result, but that probably aids the drinkability. The back has a slight fragrant upkick, which has overtones of raspberries and cherries. The finish has a touch more of the roast character, which gives a very slight acidity to the finish.

Can shared by Jez on a brew or bottling day sometime.

Smells hoppy and good. Citrus dominating, lemon-orange. Touch of lychee and musk at the back. Notable oatmealy grain which adds a touch of sweetness and is good. Standard but well put together.

Taste is oddly biscuity. Touch of caramel malt upfront that gets quite grainy like an oaty or wheatgerm biscuit midway. Hops are subtler than expected on the back; citrus rind and pine resin mostly. Doesn't get very spiky or bitter though; it's not quite dank although the character is firm and almost astringent, it just doesn't seem to go anywhere. Lingering rindy bitterness on the very back.

Good malty substance that battles with the sharp and prickly hop notes towards the back. Pleasant enough. 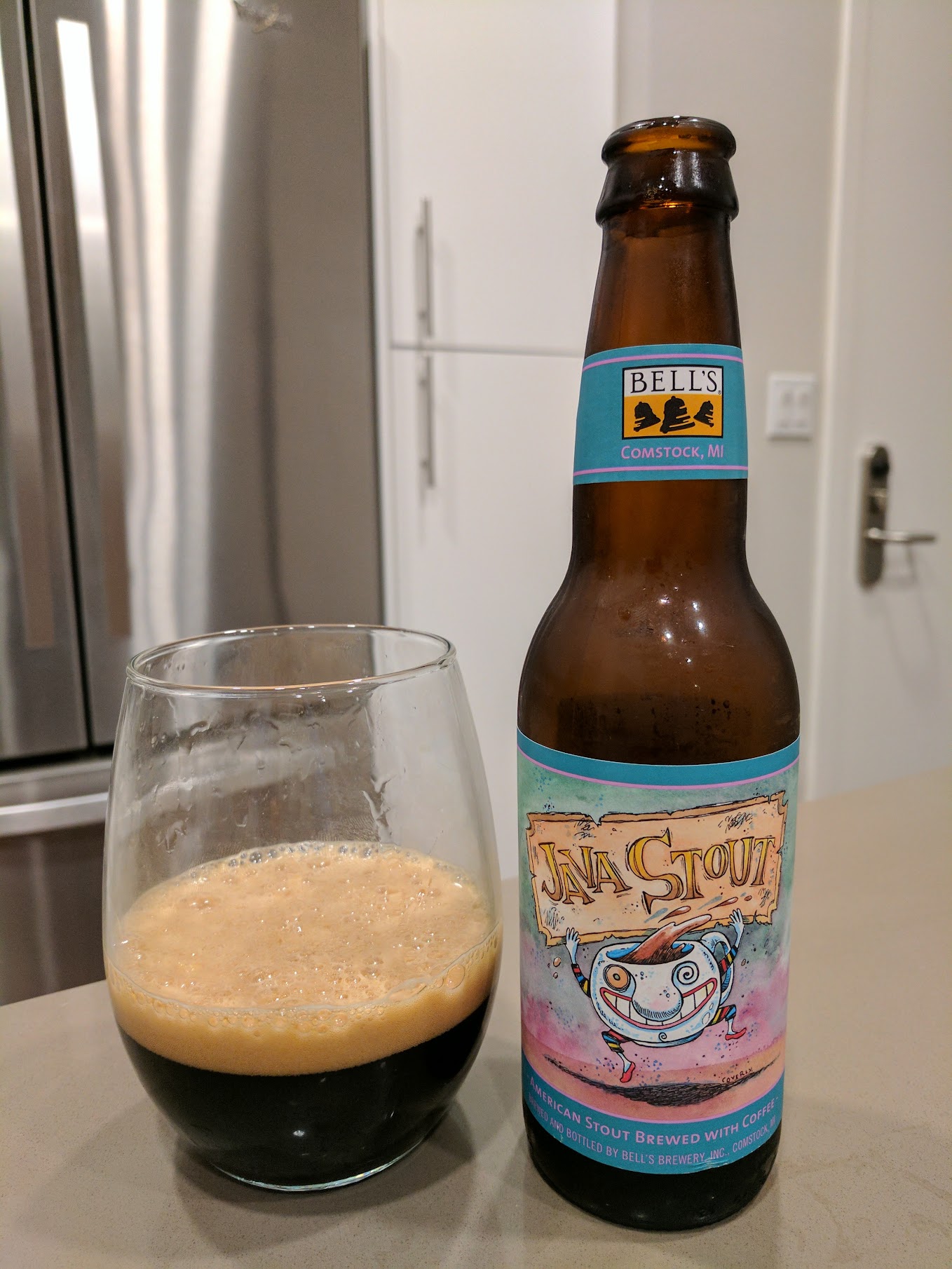 Pours a black-coffee-brown hue, really ruby when held to the light, and with noticeable clarity. Head forms slowly, but when it's there, it's a persistent film of taupe, that leaves leopard-speckled lines of lace.

Nose is really quite surprising. It's very coffee-flavoured, but in a weird way that also has overtones of slightly expired milk, or artificial creamer. It lends it a broad, rich sweetness that's cut through with the coffee flavour. It's certainly extremely interesting.

Taste absolutely matches this. It has a light, but smooth entry, without much sweetness, but with a hint of the earthy coffee hints to come. Then it wells up with a creamy coffee character; only slightly bitter, but with hints of that lactic milk, that tastes like it comes from a communal institutional urn. I'm actually impressed that they managed to capture the flavour so well.

Feel is slick and firm. It's almost sensual.

Overall: it's actually impressive in a number of ways. It captures the character of American coffee rather well, in a way that sadly won't endear itself to coffee drinkers from other parts of the world. But it's a well-crafted brew to do it so well, and that's worth something.
appearance: 3.75 | aroma: 4.0 | taste: 3.75 | feel: 4.25 | drinkability: 3.75
Two Hearted Ale
7.0% American IPA from Bell's Brewery
Overall:
79 / 100
(Excellent) 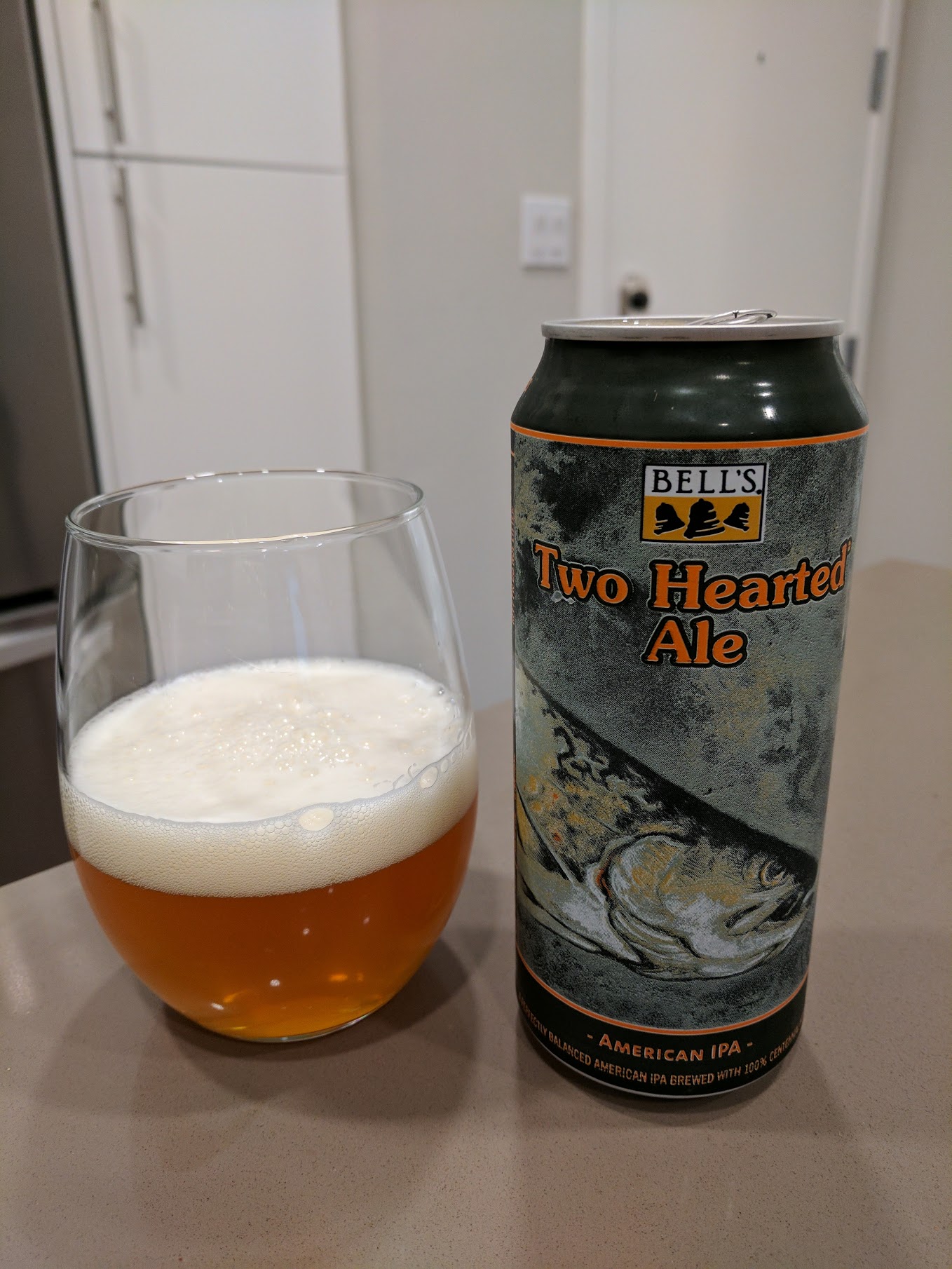 16oz can purchased from K&L Wine Merchants in Redwood City CA. Packaging date of late December 2016, so it's about 3 months old.

Pours a pleasing bright orange colour, with a fine, filmy head across the top of the glass. Lacing is great, forming in swooping streaks. Body has a bit of weight behind it, and the carbonation is pleasantly powdery when tilted. It's a good-looking brew.

Aroma is pretty good. Hints of sharp citrus—bitter grapefruit definitely noticeable—with punchy hints of pepper and crushed herbs. It's earthy, but with a brightness and sharpness that really enlivens it. Very nice.

Taste is very good, and beautifully balanced. It starts with the malt, which is sweet, but simple, leaving a barley sugar character that wonderfully complements some of the orange citrus tones from the hops. Bitterness is tempered, but it leaves an almost sparkling grapefruit character around the outside of the tongue. Aftertaste is clean, with perhaps just a hint of soapiness. Feel is clear, with a fine tingle of carbonation. 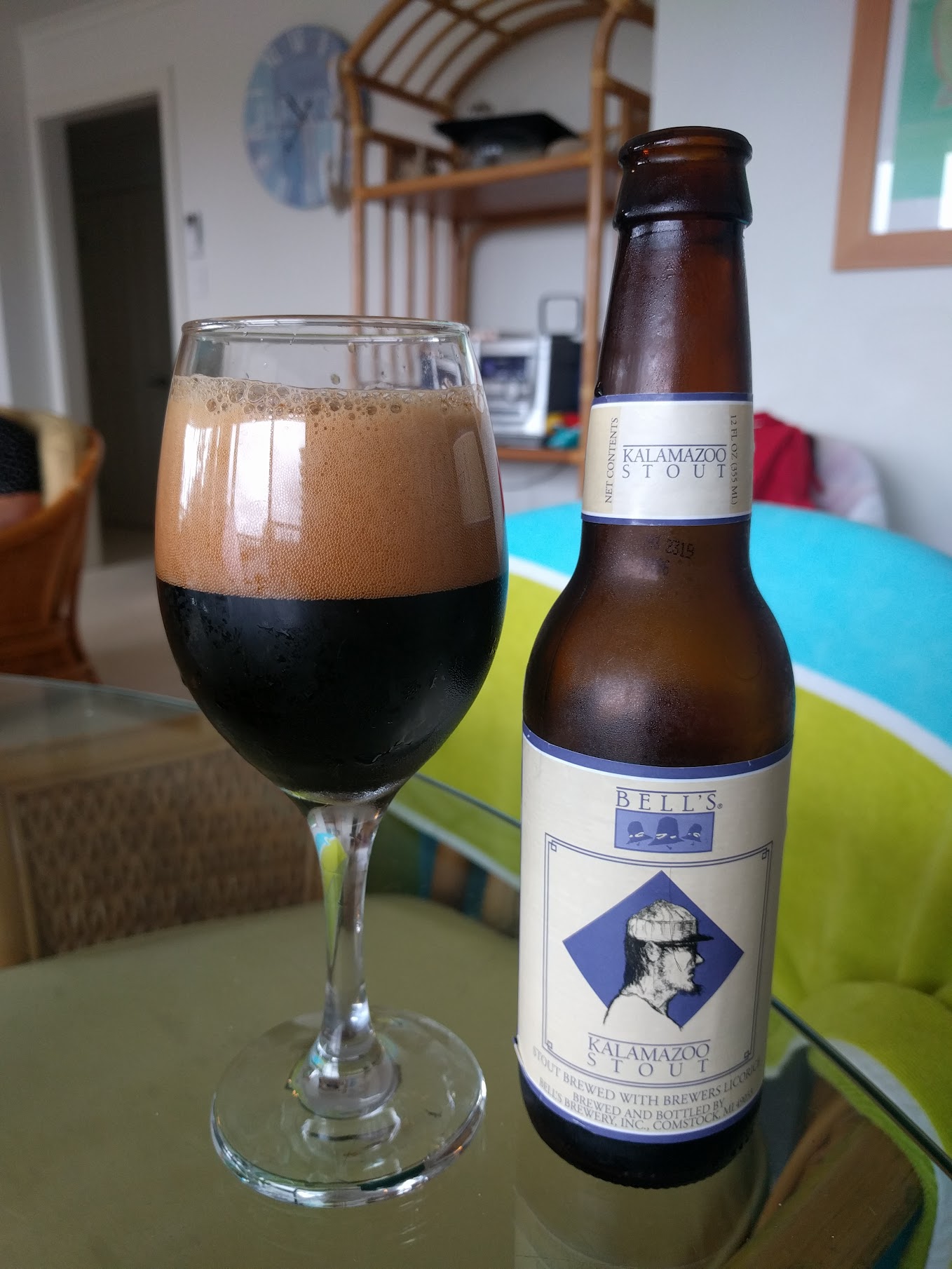 Pours a very rich deep ebony brown, with a frothy, fine and persistent head of crema foam. It's so thick that it leaves masses of sticky lace, that forms in sheets, globs and leopard-print on the side of the glass. Body has a bit of weight to it as well. Overall, it's a fine-looking stout.

Nose is great. Really wonderful broad sweet malt aromatics provide characters of buttered toast, chocolate, cocoa dust and smouldering char. It's a little light, but at 6% you wouldn't want it to punch too strongly. I really like it.

The palate lets it down to some extent though. It really does have quite a thinness running through it, which is actually surprising for 6% ABV. It's not a small beer. But this than accentuates the bitter roast character a little more than it should. There are other pleasant notes though—there's a silky, buttery sweet character that edges towards vanilla, and some faint aromatics give a little note of liquorice and blackcurrant. But it is a disappointment after the excellent aroma.

Feel is thin. And it really does the beer no favours—I'm genuinely surprised that it ends up as weak as it is.

It's a shame there are negatives to the beer, but in all honestly, the negatives are noticeable only in comparison to all the things that are good about it. It's still a really very good brew, even if it has more potential than it delivers.
appearance: 4.25 | aroma: 4.25 | taste: 3.75 | feel: 3.25 | drinkability: 4.0
Oarsman
4.0% Berliner Weissbier from Bell's Brewery
Overall:
45 / 100
(Not Great) 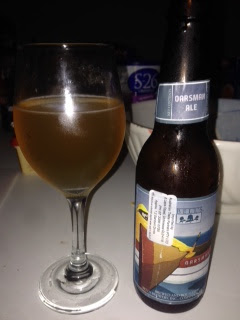 Pours a pale gold colour, cloudy and sedimenty. Head is non-existent, just a rim of tiny bubbles. No lacing. Looks kind of dull, but not bad. For the style.

Tastes a bit better. Slight tart edge on the front, then gets a slight grainy cereal note midway with corn and rice again. Finiahes a bit dry, but not wholly clean; residual sugar on there. Yeah not loving this. It's not what I expected from the style, but generally just sweet, yeasty and a bit adjuncty.

Bit of pull but largely from carbonation it seems. Thin otherwise.

Bit thin, and way too sweet. I've had berliner weisses before that taste quite similar to this, and they were fresh on the tap, so I don't think it's a shipping/grey market/age issue, just the yeast taking hold of the flavour without puckering it up enough to make it tart or refreshing. Disappointed with this.
appearance: 3.5 | aroma: 2.5 | taste: 3.0 | feel: 2.75 | drinkability: 2.5
Kalamazoo Stout
6.0% American Stout from Bell's Brewery
Overall:
67 / 100
(Solid)
Bottle purchased by Jez, almost certainly grey market, so read my review with skepticism. Opened on the stroke of midnight, 1/1/16.

Taste is nutty, caramelised with mild roast character. Hazelnuts, chocolate, stale cocoa too. Maybe a touch old again, but hints of sweetness and nuttiness. Decent but grey. If beers will be grey imported, this is the style that should be, as it keeps well.