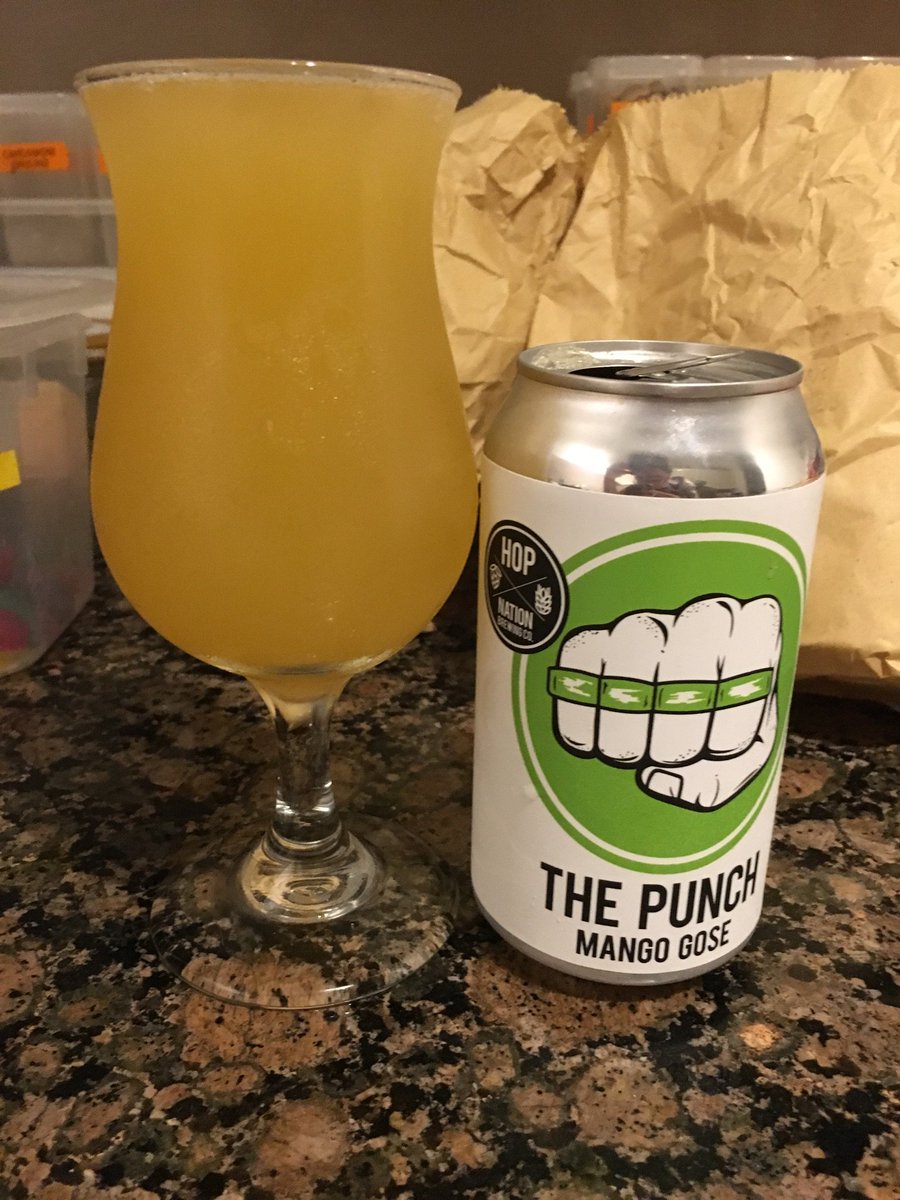 Day 6 of my #fletchmas Advent Calendar from Jez; reviewed blind - which was a fascinating way of drinking this, and hence all my comments about this seeming like a NEIPA.

Pours a very HAZY pale yellow colour, with lots of HAZE in the body. Head is whispy, quite generous when poured, but sunk to a thin rim of bubbles. Not much lace. Looks HAZY, and pale, and like an ale of some description that's often hazy and pale.

Smells fruity, tropical, and reminiscent of other HAZY beers I've had. Huge mango pulp and orange character, some notes of guava and passionfruit nectar as well. Yes, all tropical; pleasant but a little light and insubstantial.

Tastes hmmm, yeah ok well in the words of Jamie Lawson, I wasn't expecting that. It's maybe not a NEIPA after all that, because it's far more sour. Big fruity fizz on the front, that develops this slightly underripe mango character towards the mid, with a hint of lime to it. Distinct tingle from the carbonation and a slightly thin body; the tropical fruit juice character mellows out at the end, and yeah despite that tart character I think it's all fruit and not a sour and I'm definitely back in HAZY territory now. Quite interesting though; fruit juice with a bit of a tart bite and nice drawn-out finish with virtually no bitterness at all. Quite fleshy and still clean and drinkable. 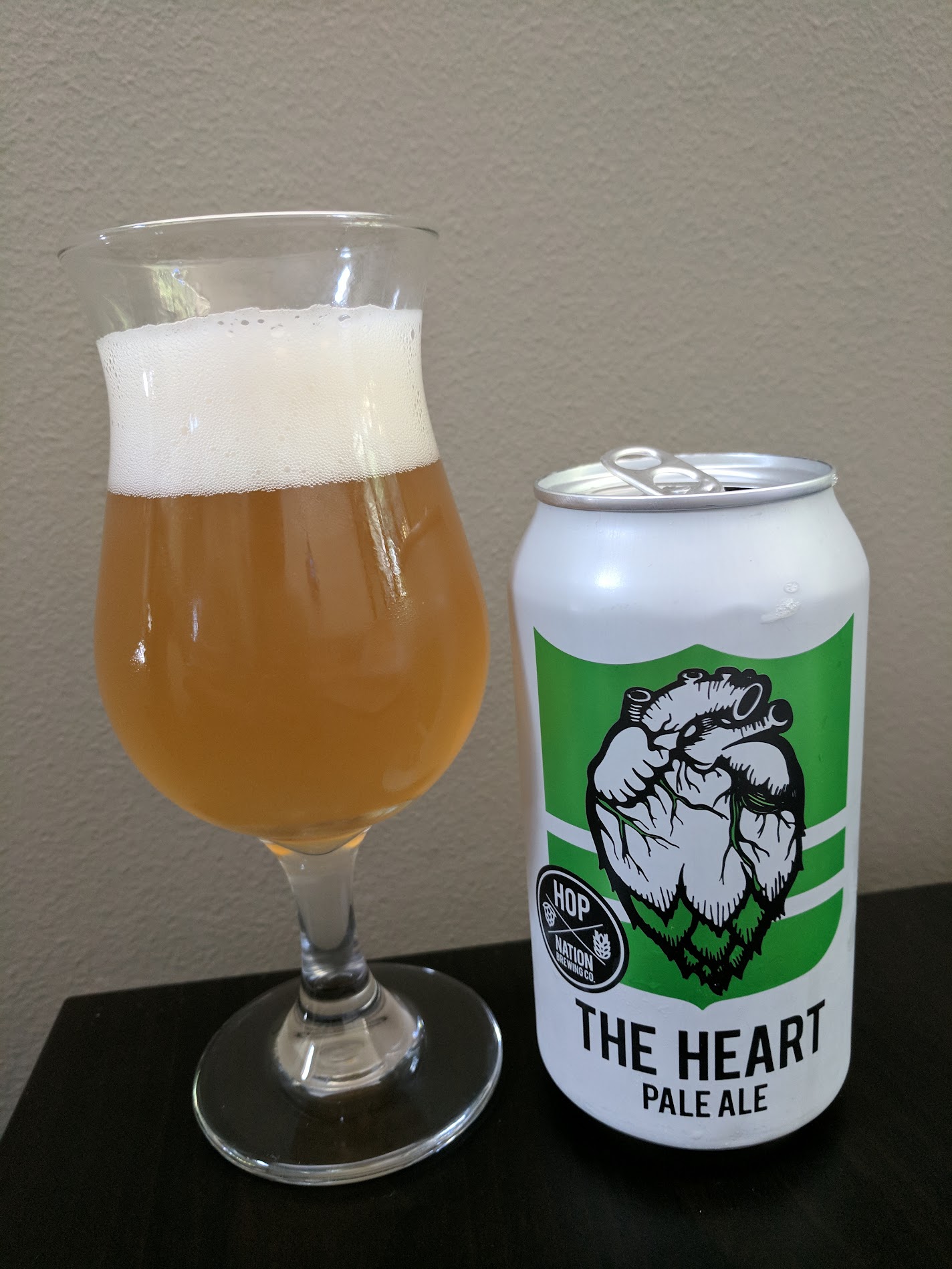 375ml can purchased from Slowbeer.

Nose is also good, with a fine, but not overdone hop character giving hints of lemon and melon. Otherwise, it's a little thin, with a slight cereal character coming through, but mostly it's clean and light, which is what you want for the style.

Taste is a bit more straightforward—again it's not bad for the style, but it's also thin and lacking interest. There a balance of hop character on the back, with just a slight astringency that you can pass off as dryness in the finish. Otherwise, it's based around flat, neutral malt, peppered with a fine carbonation.

Pours a gold colour, cloudy but not as cloudy as is par for the style. Foamy off-white head, looks alright.

Smells alright; fairly typical IPA character but maybe more west coast, with big grapefruit character, lemon and orange on there as well. Not a whole lot else, but decent.

Taste is also pretty standard. Caramel malt notes upfront that descend quickly into a long drawn-out citric hop bitterness, with grapefruit and lemon the main characters. Not overly bitter which is good but otherwise just tastes like a standard American IPA and not necessarily a NE version.

Decent body; slight hint of warming alcohol as it goes down. But yeah, not bad. 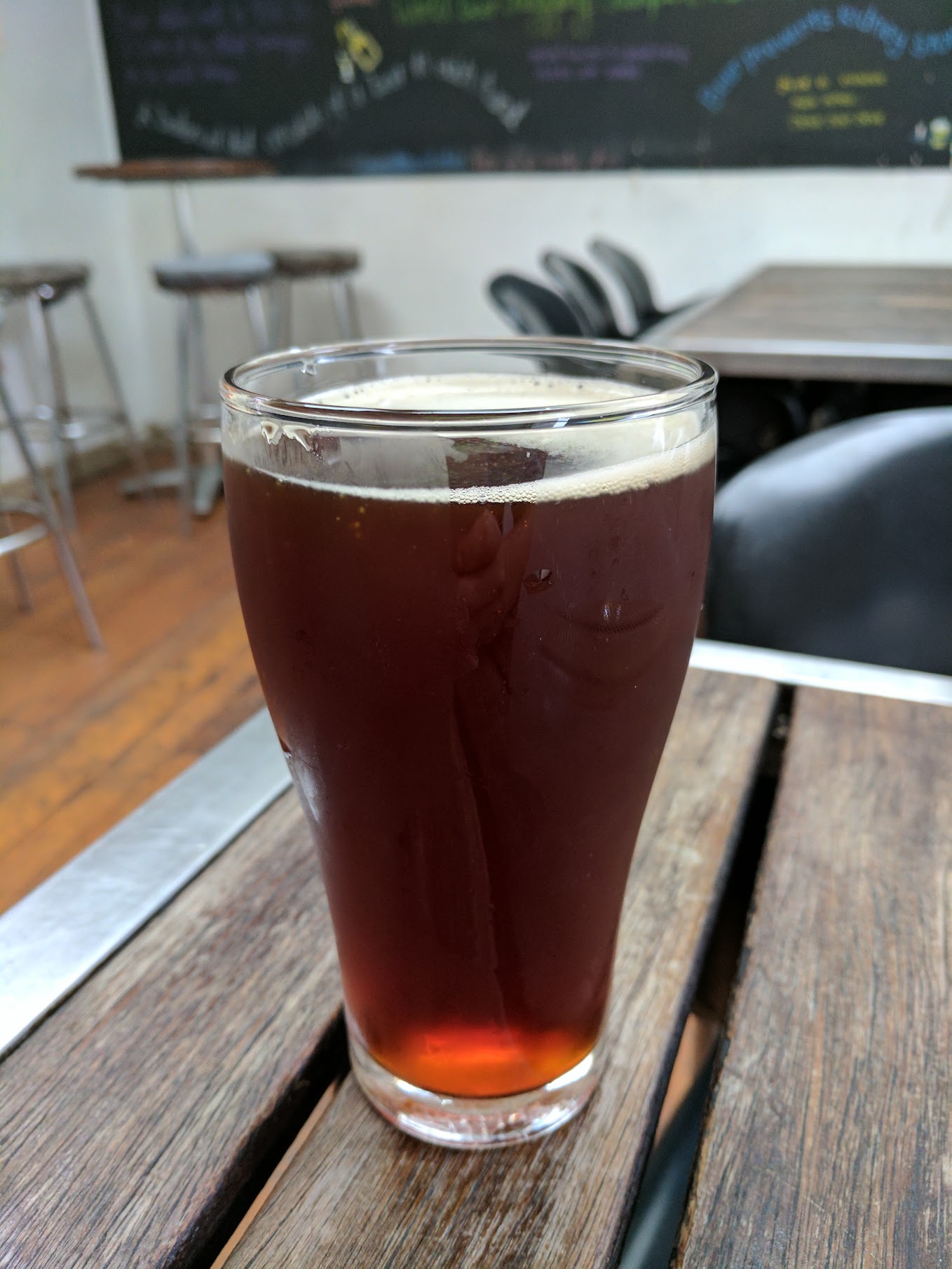 Pours a proper ruby-red colour, with some hazing to it. Head is beige, but very fizzy and insubstantial, disappearing quite quickly and leaving no lace. Carbonation is aggressive. Body is light but with a kind of slippy weight to it. Looks okay.

But from here it's all a step upwards. The nose is really great, with a lot of the very classic characters you expect from the style. There's vinous oak at the front, tending towards a balsamic acidity. Aromatic cedar wood comes through too, along with a faint fermented pepper note. It does all the right things for the style, which is very impressive.

Taste is also very good. There's a ripping tartness through the centre—much more pronounced than just about any non-Belgian example I've had. The back of the palate has a woody, balsamic complexity. Lingering fragrant wood sits in the aftertaste, more oak and cedar. There's a very, very slight yeasty note on the finish, but it's mostly smoothed by more of that sharp tartness, which lingers with a suggestion of cherry skin. Hell yes.

Feel is light and sharp, with a shredding acidity.

Powerful, complex and absolutely hitting the right notes from the style. It has such a wonderfully aggressive acidity too, which is too rare for the style. Honestly, this is a cracking Flanders Red, and absolutely probably the best I've had from somewhere other than its home region. I am extremely impressed.
appearance: 3.75 | aroma: 4.25 | taste: 4.5 | feel: 4.25 | drinkability: 4.0
The Damned
4.8% Czech Pilsener from Hop Nation
Overall:
62 / 100
(Decent)

Bottle from my Beer Crate Advent Calendar for 2016.

Pours a pale orange gold colour, a bit flat with small bubbly head, white. Some traces of lacing when the glass is tilted, but otherwise just a bit flat.

Smells pleasant, light and fruity. Some pilsnery malty notes, little bit husky and a touch of caramel, and just stonefruit mostly. Quite subtle, but pleasant and not overly sweet.

Taste is crisp, grainy upfront with a nice caramel and oatmeal sort of character to get us midway. Hops don't have a lot of complexity to them so they just act as a sort of clipping off of the sweetness that gets a small residual bitterness, somewhat medicinal. Maybe a subtle touch of that stonefruit but otherwise fairly lacklustre in terms of new world pilsner notes. Otherwise pretty good, clean drinkable pils.

Decent mouthfeel; fills the mouth upfront but dries out subtly towards the back.

Yeah I feel it's a well-made pilsner, but they don't do themselves any favours talking up the NZ hops on the bottle, just because the hops are ultimately just functional and they could have far more interesting characters to play with otherwise.
appearance: 3.25 | aroma: 3.75 | taste: 3.25 | feel: 4.0 | drinkability: 3.5
The Damned
4.8% Czech Pilsener from Hop Nation
Overall:
68 / 100
(Solid) 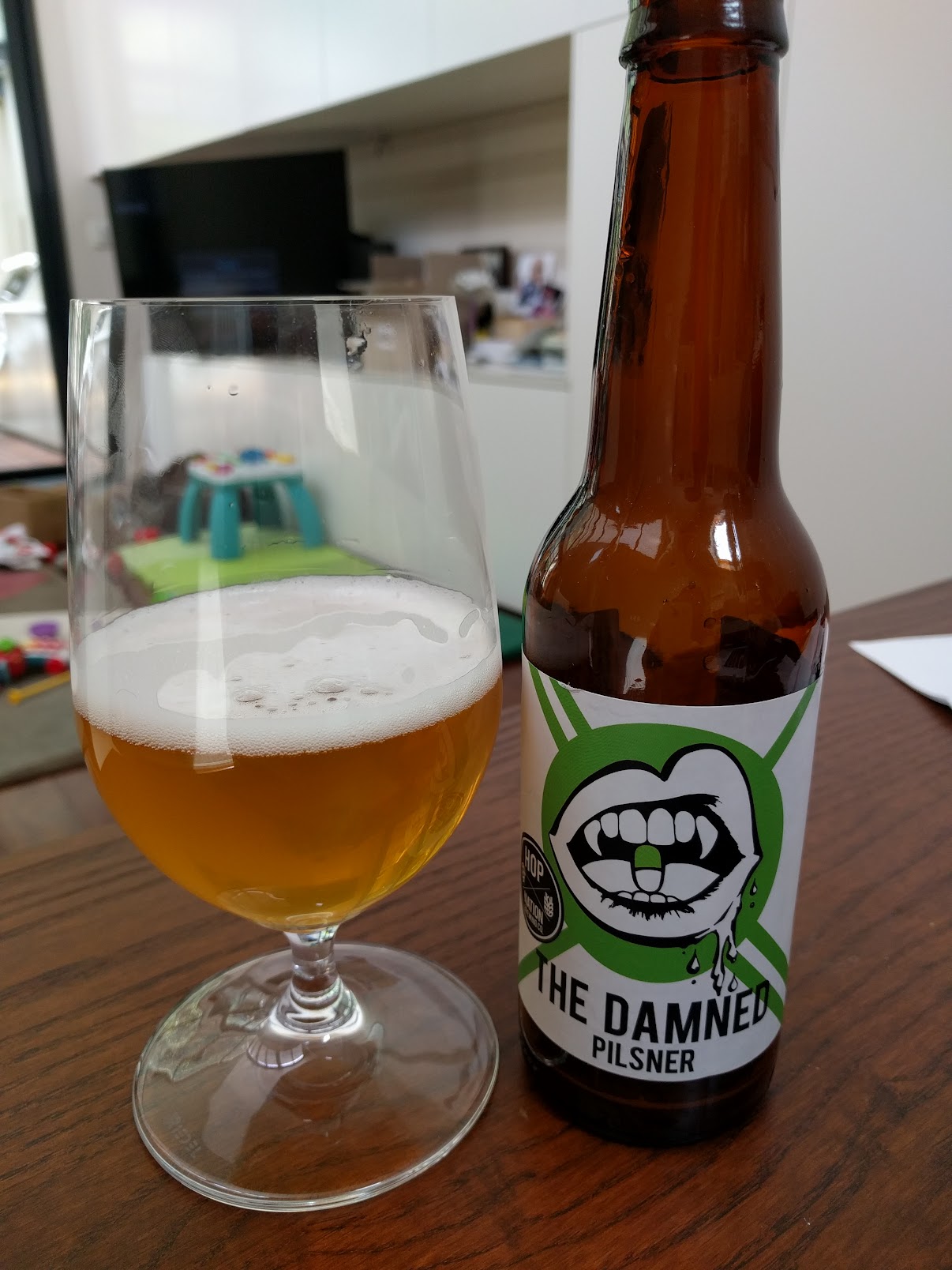 330ml brown bottle purchased as part of The Beer Crate 2016 advent calendar. This was #2.

Pours a very clear, bright golden colour, quite deep yellow, really, with a insubstantial, coarse-bubbled crest of almost-white, that only really forms a mild film once it settles out. Body is reasonably firm, and there's some nice fine carbonation to it. Minimal lacing. Looks okay. No better though.

Nose is earthy, with a faint carbonic twang to it. There's some grainy malt notes, like you'd find in a bière de garde, coupled with an earthy fragrance like a poor saison. Hop character is somewhat limited, and what's there is not oil-focused, rather giving leafy, weedy notes. It's not bad, all up, but it's not stellar either.

Taste is actually pretty good. There's a nice cleanness to the palate, a stone path lain down by the grainy malt, with just enough hop bite to create balance, and the sensation of crispness. The feel through the middle is quite slick, and it could have felt heavy without that kick. On the back, it's very clean, with both the malt and hops drying up enough so as to not overstay their welcome.

Smells oaky, vinous for sure. Touch of Brett on there as well, and a fair spice character as well with some licorice and peppery notes. Smells like a Pinot Noir, basically.

Taste is fairly sweet upfront, with dark caramel, vanilla and peanutty malt notes. Develops some roast towards the mid and then the oak takes over, slightly boozey with vinous notes and a touch of bourbon. Slightly sour, and roasty in equal measure. A bit odd; doesn't totally work for me.

Full-bodied but the booze still manages to seep through in a bit of a sharp way. 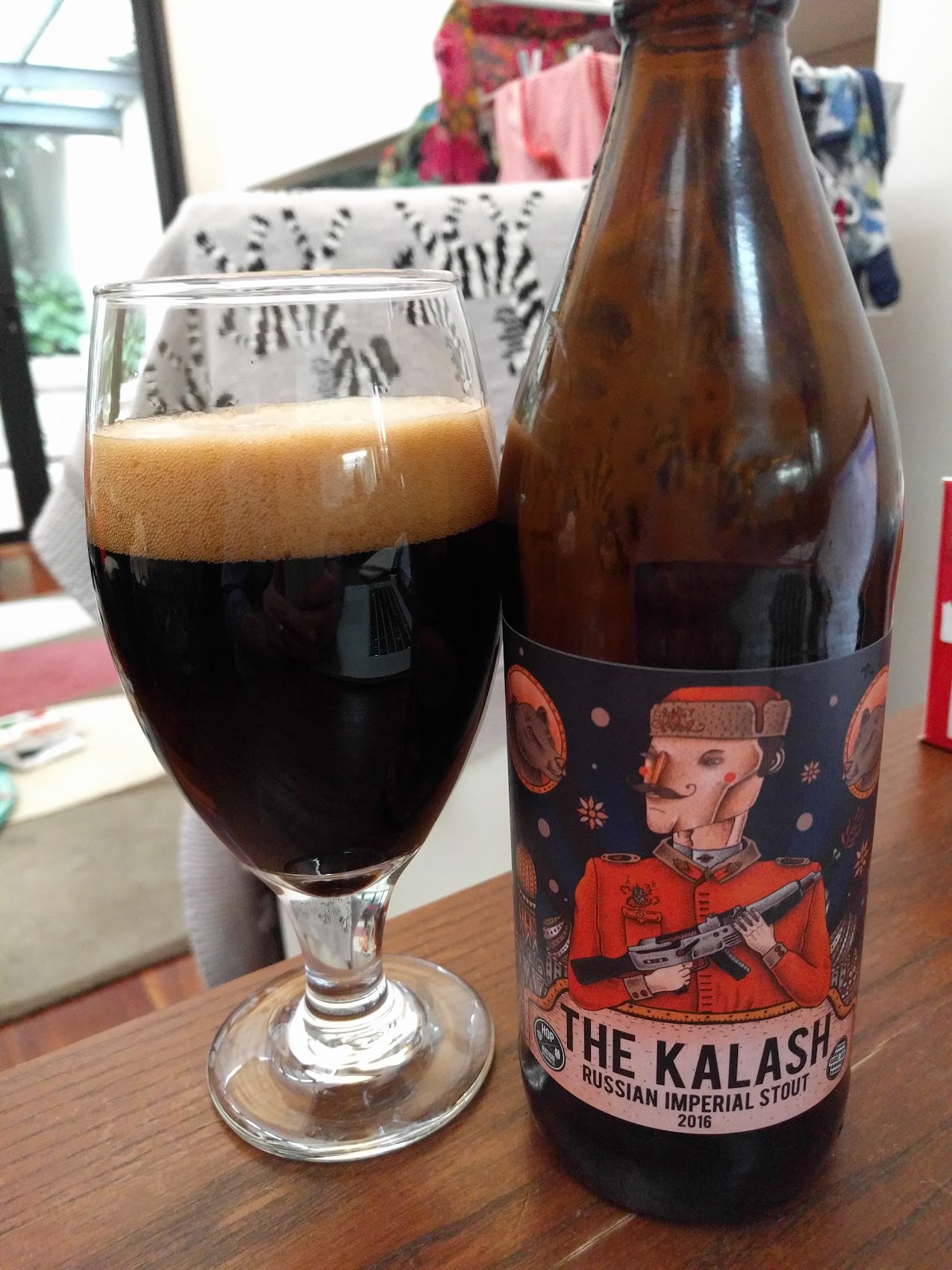 Pours a very deep black-brown, opaque and sinister in the glass. Head is also dark, forming a milk-chocolate crest that stays surprisingly bubbly and light. Body is also surprisingly light, with a swiftness to the movement and only a slight gloss suggesting it's as heavy as it is. Looks good.

Nose is very pleasant. Toasted notes with dark chocolate, wet wood, and espresso puck coming through. Atop this are some lighter, greener, grassier notes, giving a little hay and snapped green twigs. As it warms, there are notes of vanilla and perhaps the slightest suggestion of lilting pinot noir—it's faint though: faint enough that it may just be the note on the back of the bottle that I'm smelling.

Complex malt on the palate, giving a multitude of different dark, toasty and biscuity grain notes. Here there seems to be a more prominent contribution from the wine barrels, with a surprisingly coarse, tannic character on the back. Combined with the ashiness of the malt, it actually makes the back too bitter. Feel is fairly slick and smooth, but doesn't provide a buffer towards the back. It's unapologetic, I'll give it that. 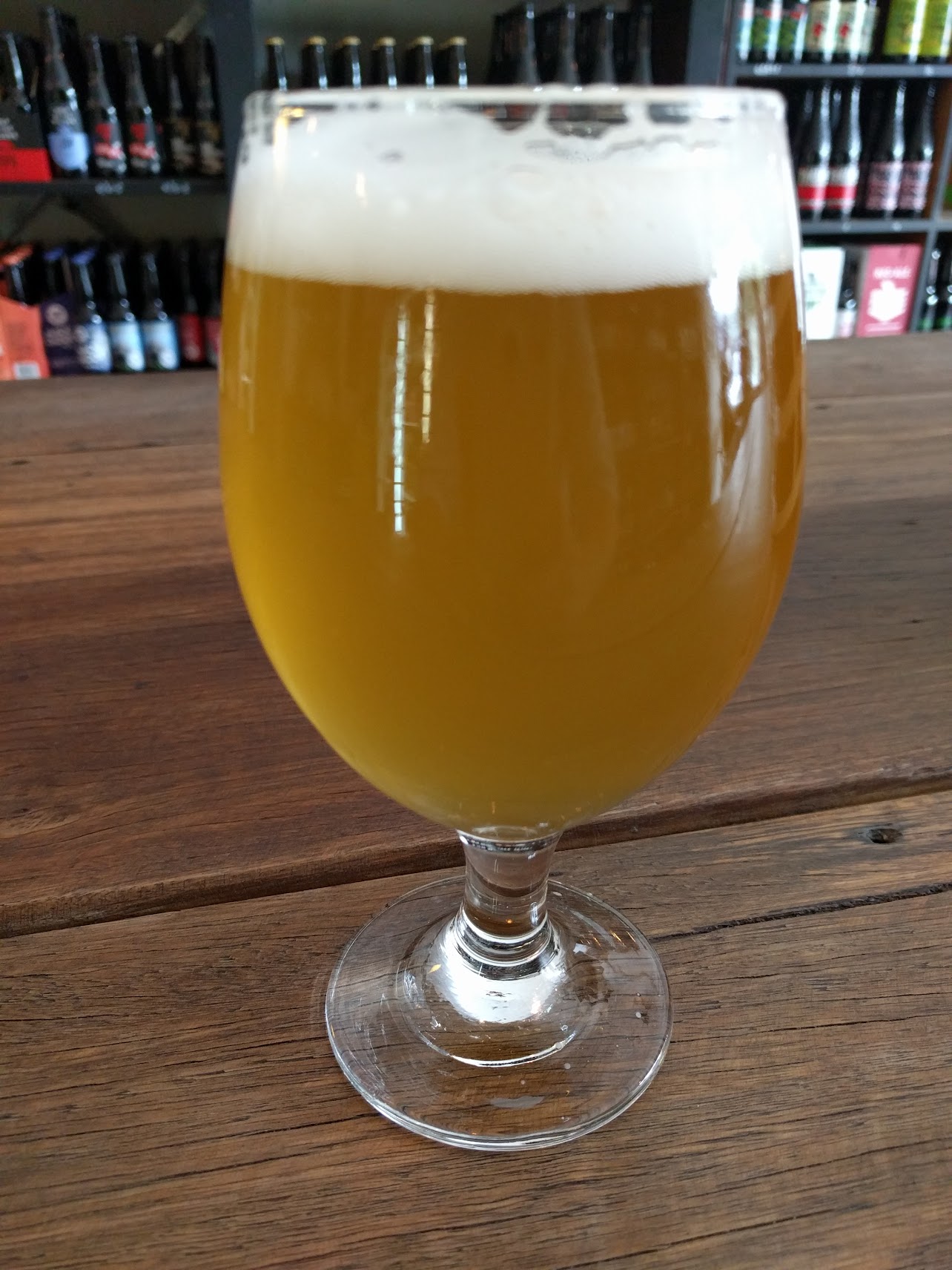 Tried on-tap at Slowbeer in Melbourne. This was a collaboration between Hop Nation and Jamsheed Wines, and is brewed with riesling grapes.

Pours a hazy, refractive yellow golden colour, with a very fine, rather pleasant head of white. This leaves good fine rings of lace as it goes down. Fine and slick in the body too, with powdery carbonation forming when swirled. Looks good.

Nose is sharp, with slight yeasty, vinous tones to it. Minimal true acid, but there's a bloated funk to it like wine fermentation vats. Under this is a crisp, slightly savoury grain note that speaks to its pilsener base. It's decent enough.

Taste is fairly mild, slightly grainy and thin on the back, but maintaining a sense of being light bodied and drinkable. Back has a dryness which feels yeasty and slightly flat, until you realise it's the Riesling giving a bit of bite. It's forgivable when you realise it's intentional, but honestly, that character really sucks in a beer. Finish is dry and slightly grain-savoury, with that lingering bite and flatness from the grapes.

Feel is smooth and fine throughout, with a very mild carbonation. It's pretty decent.

Overall, it's okay. I'm not convinced it's not slightly miscued in execution. It might also be poorly conceived a little bit as well, with the riesling not being a happy addition to the beer. At the very least, when it's executed like this, it's easy to believe the idea of the beer isn't a good one.
appearance: 4.25 | aroma: 3.5 | taste: 3.5 | feel: 4.0 | drinkability: 3.25